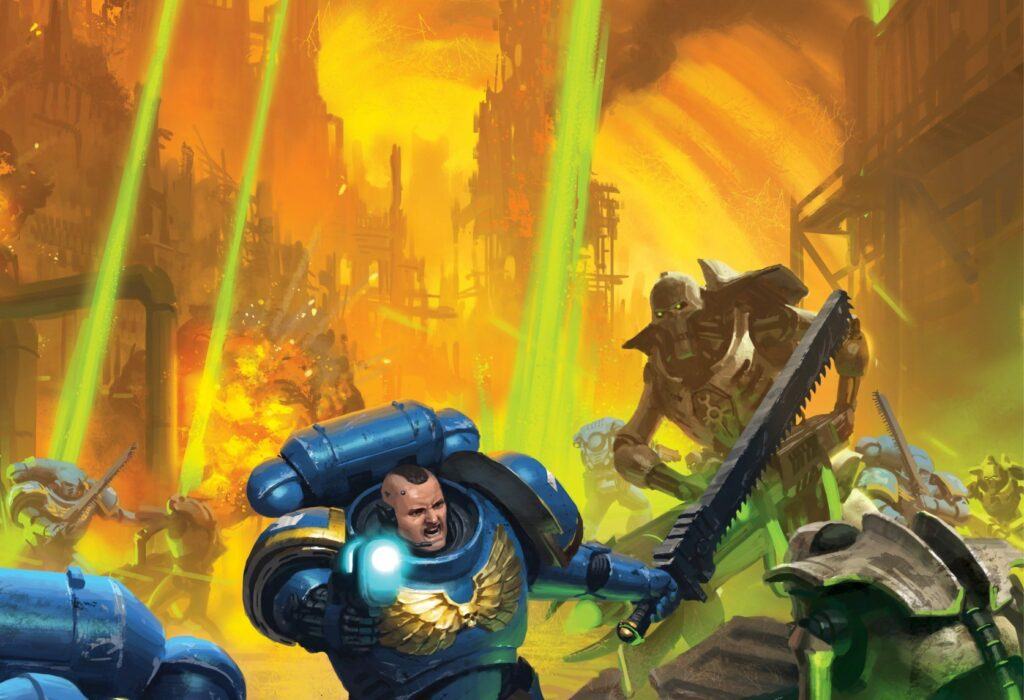 The deep bass of bolter explosions. The warp-phase resonance of gauss weaponry. The clatter of dice bouncing across your table. At its best wargaming delivers an evocative narrative of forces clashing on your kitchen table. At its worst it is an impenetrable ream of tables, special rules, and math equations. Aware of this, Games Workshop has spent the last few years ensuring that there is a game to meet you at your level regardless of what you want. Fireteam is the latest entry. Available exclusively at Barnes & Noble and in the nation of Germany, Fireteam distills Kill Team one step further and in doing so creates a fantastic wargaming experience for the board game audience.

[Editor’s Note: For the sake of playing with painted miniatures, I used Necrons different from the models included in Fireteam. An image of the included unpainted models can be found at the end of the article.] 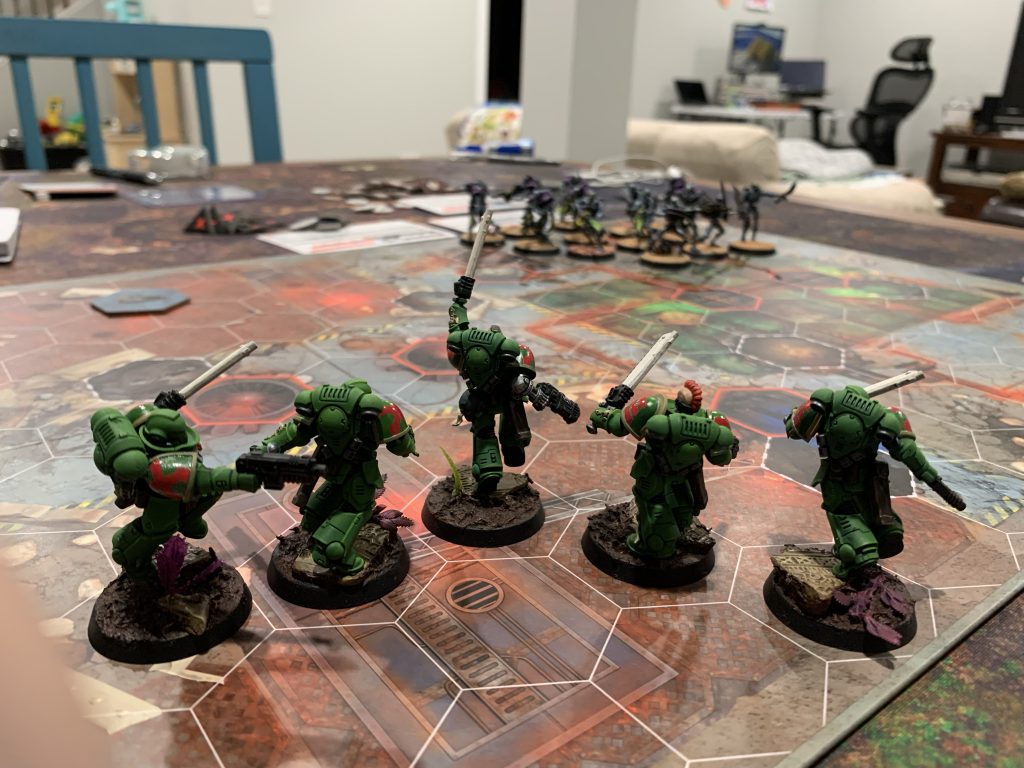 For the Emperor! Credit – Raf Cordero

A game of Fireteam is played over 3 rounds called “Turning Points”. That name seemed strange at first and caused me to stumble while reading the rulebook, but after a couple games of Fireteam I can’t think of a more perfect expression for what this game is about. The scale of Fireteam is tiny. We’re talking 5 individual Space Marines charging into a battle that would, narratively speaking, last no more than 10-15 minutes. But it represents a crucial 10-15 minutes that determine the fate of a larger narrative. A turning point in the action, if you will. At the beginning of each Turning Point you’ll choose a smaller immediate objective from a hand of cards and select a “Strategic Ploy” for your side, which is where some unique flavor will emerge. This is where the Necron’s famous “Reanimation Protocols” live; losing your horde of gunners doesn’t sting as bad when you know you have a chance to bring them back the next round.

The action kicks in pretty quickly. Each Turning Point is made up of 8 turns where you and your opponent will each activate an operative. The board is relatively small and the various deployments dictated by the scenario cards ensure that you can almost certainly start blasting your opponents away from the very first turn. There is no time for a build in Fireteam, blasters and bolters are firing from the first moment and games often have action until the very last turn. 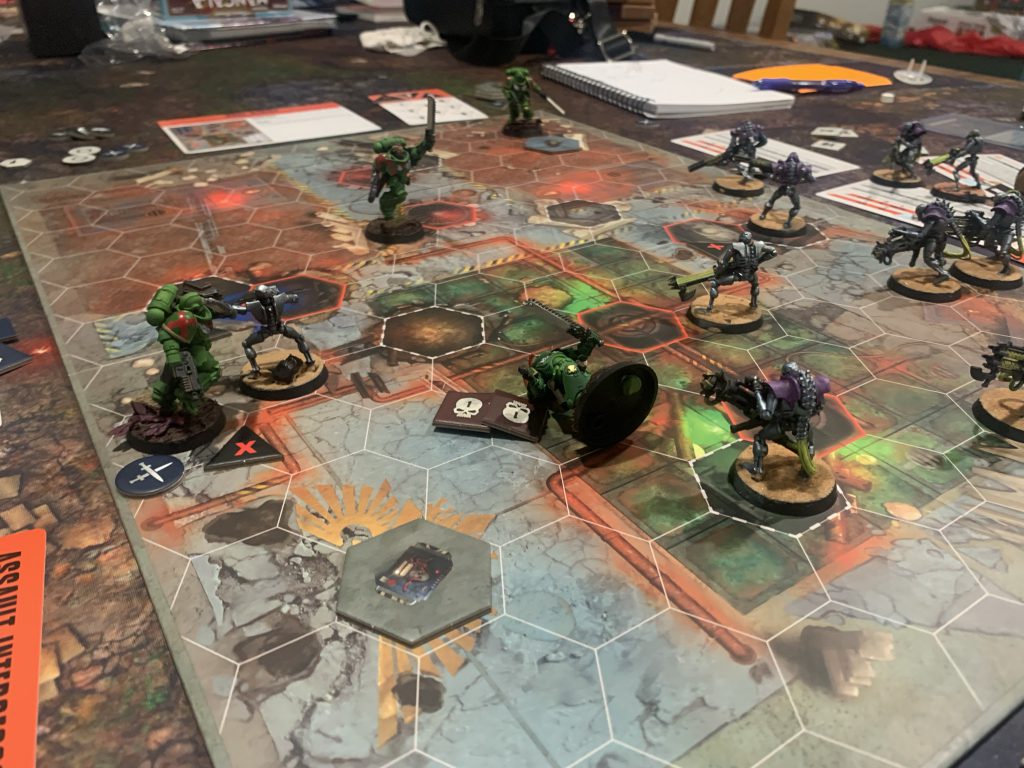 This is exactly what you want out of a skirmish game of this size. The board is small, the squads are small, so the action is as large as it can be. A danger in small-scale skirmish games is that they devolve into a couple of miniatures standing next to each other while the players roll dice at each other. While there are certainly plenty of dice to be rolled, Fireteam avoids this fate through the 12 included scenario cards. While you’ll be doing similar things in each scenario—moving, attacking, and doing it again—each scenario changes your tactical motivation.

The recommended first scenario is Dual Strike, which is a clean and simple scenario. You start in opposite corners and score points by holding objectives. There are two fireteams included in the box. A 5-man Space Marine squad built to close the distance and fight up close and a ploddingly slow 13-bot Necron squad that makes up for it with punishing attacks at range. This asymmetry alone provides tension to that scenario. The marines can (and likely will) be able to take both objectives in the first round and unless you opt for certain Strategic Ploys your Necrons will almost certainly not take any objectives off the jump. They’ll be forced to advance slowly and hope to burn down a couple of marines under heavy fire from a distance. 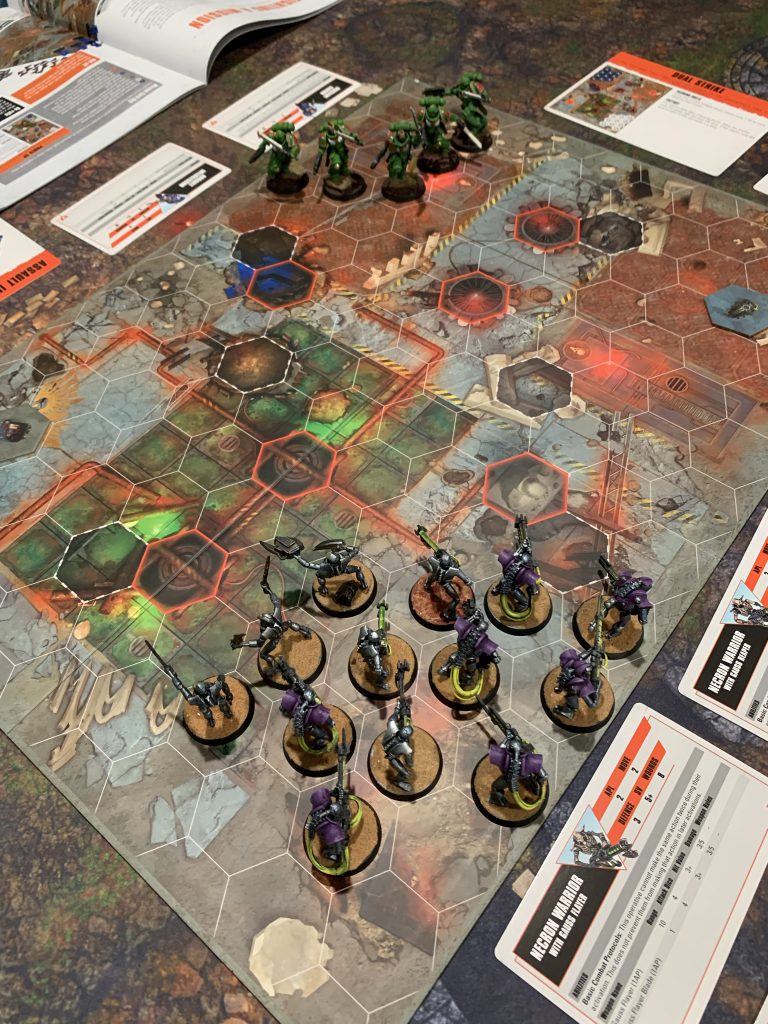 Slow is the name of the game for the Necrons; barring extraordinary rolls you likely won’t be able to one-shot a Marine given that Necron warriors can’t perform the same action twice. No such restriction exists for the Marines and their impressive damage mean it’s pretty easy to take out a Warrior every time you pull your pistol trigger or swing your chainsword. Victory will come from paying careful attention to Scenario scoring. The scenario Uplink can be a challenging one for our bots in silver as they’re forced to simultaneously hold multiple objectives in a scenario that makes you use up an action to take control.

The Scenarios also provide the cinematic engine that is a hallmark of Games Workshop games. In one game of Uplink, a marine bolted across the board and stood between two control panels. Using his actions to take control of both panels meant he stood exposed, slowly withering under a hail of fire. On the other side, a slow horde of Necrons stumbled inexorably towards their control panel. While the Marines could steadily pick them off, late-round exhaustion set in (represented by diminishing action points) and eventually the Necrons broke through the fire and took control. Again the scale is small, but these are the moments Black Library books are made of. 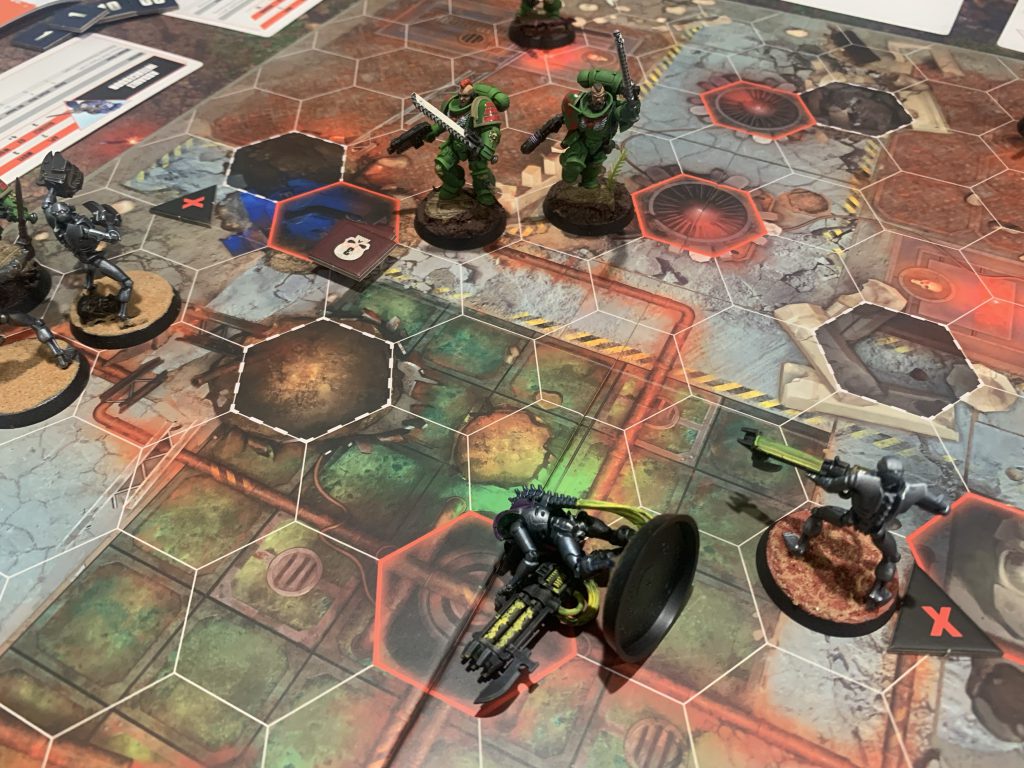 As someone on a never-ending quest to get my board game buddies into miniatures game, the existence of Fireteam represents my best hope. Assembling the included minis is easy, and the elimination of list building and rulers makes it imminently more approachable to the uninitiated. Little is lost, however. Fireteam manages to pack an impressive amount of Warhammer combat into a tiny package, and does so in a way that makes wargaming accessible and exciting. The box even includes cards for players who want to grab a box of Orks, Tau, Guardsmen Scions, or Harlequins.

A note for Kill Team players:

As happy as I am to recommend Fireteam to anyone who isn’t currently playing Kill Team, it is worth pointing out that this isn’t a box Kill Team players will have any need to rush out and pick up. The models are not unique to this box, the board is not visually compatible thanks to the hexes, and the lack of terrain means there isn’t much of a plastic draw either. As noted, it’s great to have as an intro game for new folks but (unlike the B&N exclusive Underworlds games) there isn’t a crossover reason to grab this. 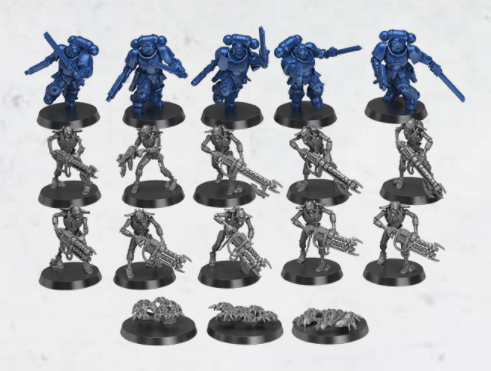 If you have any questions or comments leave them below or email us at contact@goonhammer.com. A review copy of Fireteam was provided by Games Workshop.