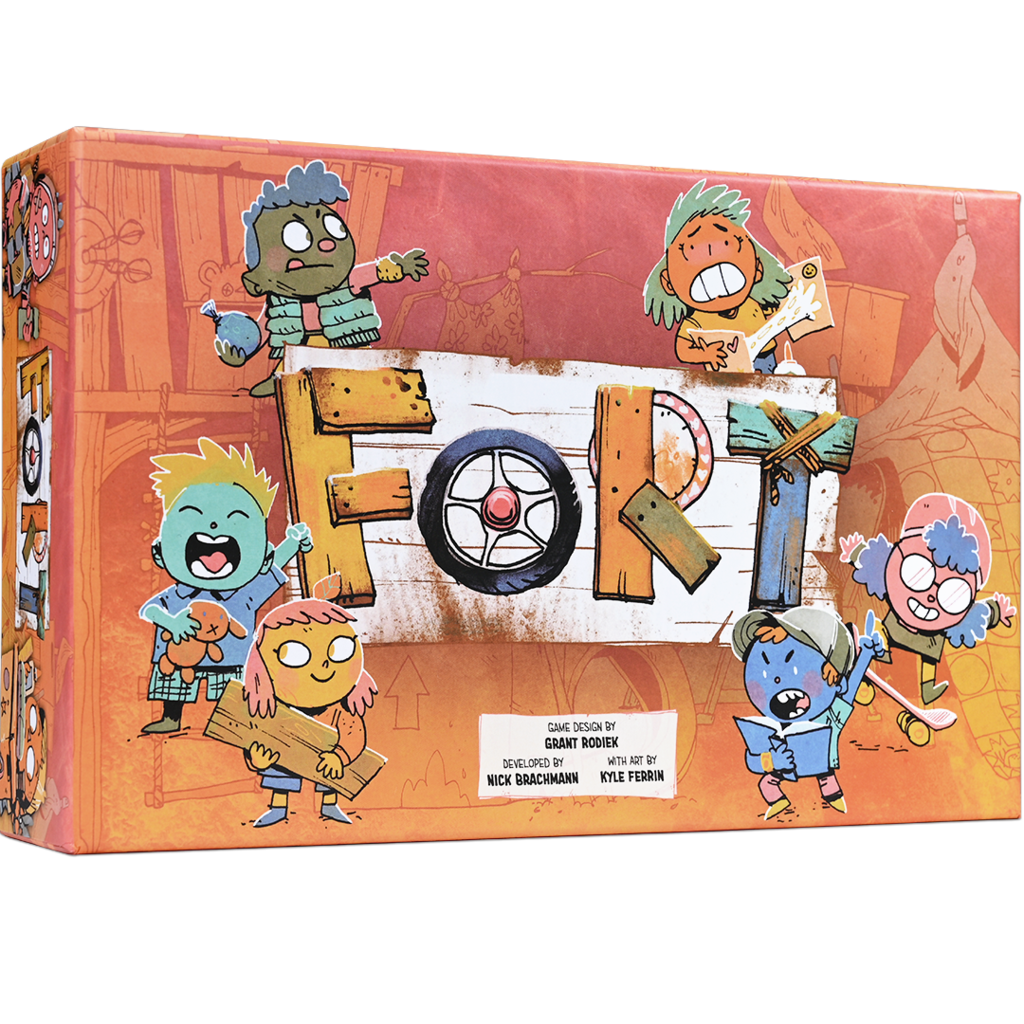 Grant Rodiek’s board game designs are always worth checking out. While he may not be a household designer name (yet!), his designs tend to take familiar games and push their boundaries out of the comfortable and into the exciting realm of familiar unfamiliarity. Hocus spins Texas Hold ‘Em into the fantasy realm, Cry Havoc layered an area-control combat board into an area-control game, and Imperius (originally Solstice) is a card-drafting game where you often draft your opponent’s cards and play them for them. In Fort, Rodiek focuses on the venerable genre of deckbuilding and has created something both evolutionary and familiar.

Deckbuilding, as a genre and mechanism, is still one of the newest original mechanisms we’ve seen in the industry. However, its explosive growth means that by now it feels as universal as rolling a die and moving that many spaces. We’ve reviewed Aeon’s End in the past, which is one of the many titles out there trying to put a fresh spin on the system. Popular titles include Dominion and Star Realms, but if you aren’t familiar I can give you a quick rundown.

Players begin with a small deck of cards that is typically identical in composition. These cards are split between Resource Generating Cards (gold, money, mana, etc) and Point Generating Cards (VPs, Damage, etc). Your turn usually begins with 5 cards in hand which you’ll play to the table. While “Points” is arbitrary, these cards tend to effect the game state. You might score points directly or damage your opponent. Resource Generating cards give you something to spend that turn from the game’s central card market. Purchased cards go into your discard which will be shuffled into your deck once you work your way through your initial starting deck. So the game goes; play through your deck adding new cards as you go, seeing those new more powerful cards on the next cycle. You literally build a large deck as you play, fulfilling some scoring condition at the end.

From here strategies and twists abound. Aeon’s End involves no shuffling, giving clever players the ability to manipulate their draw order. Star Realms introduces suits by way of space factions, providing efficient synergies if you lean into one or the other. Trains sees you using your cards to build a network of train routes on an actual physical board. All that said, however, most of these games feel very similar. There is often little interaction or reaction to other players. Deckbuilding is a genre focused on combos and efficiency; heads down you’ll draw, play, and shuffle in turn for 10-45 minutes before counting up the games points and seeing who wins.

At first, Fort seems very similar to the genre games that came before it. You’ll have a deck of starting cards and begin your turn with 5. Some will be played, they’ll move to the discard pile, and eventually you’ll reshuffle and keep going. The goal in Fort is to score the most points by having exciting adventures with your best friends—a collection of scrappy neighborhood kids brought to life by Kyle Ferrin’s fantastic art—or by building the biggest, coolest, most awesome backyard fort the neighborhood has even seen.

Everything about Fort is familiar, and yet things start to change almost immediately. Instead of attempting to play your entire hand, in Fort you’re limited to playing a single card out of your hand. If the card’s ability is repeatable, you can play additional cards of the same suit to trigger the ability multiple times but the ability on those cards will not trigger. Additionally, many cards can be followed by your opponent. If they have a card of a matching suit then they can trigger your ability one time. This immediately breaks from the traditional deckbuilding strategy of wanting to fill your deck with as many synergizing cards as possible. Because you can only play 1 card on your turn, having an off-suit card that you can play on an opponent’s turn can be an excellent way to pick up extra actions.

Additionally, the look-out space affords you the opportunity to bury cards under your playboard. Only the suit remains active, but you can use these Lookout cards to boost your own actions even if you don’t have matching cards in your hand. This is a feature typically seen in engine-building games or tableau buildings. You lose access to the card for the rest of the game, but it potentially will pay you back turn after turn.

After playing your cards to the table, anything you played moves to your discard. Any card you didn’t play, however, moves to your Yard. See, cards represent the kids who form your posse and if you don’t actually play with them on your turn they’ll sulk about in the Yard. In additional to a pool of public cards, when its time to acquire a new card for your deck you can pick from any scorned pre-teen hanging out in your opponent’s Yards. Ignore them, and they’ll run off to play with someone else. This isn’t always a negative thing, however; kids leaving thins your deck and it can be a great way to cut a card that you no longer need (poor little buddy). It also has the potential to keep cards out of your shuffle, giving you a modicum of control over your next couple of draws.

Independently none of these tweaks are particularly ground-breaking. Fort has a number of other elements that will also be familiar to fans of the genre: secret end-game scoring bonuses, abilities that allow you to break the rules, and the Pizza/Toys resources that carry over round to round are all things we’ve seen. Together, however, this all comes together to change the game. Fort plays like a deckbuilder but it doesn’t feel like a deckbuilder.

Fort transforms a genre into something that is typically quite passive into something that becomes reactive. Monitoring opponent’s turns for opportunities to follow with a card of your own gives an almost real-time feel. I often find myself holding onto a card not for its own abilities, but because I know that I can piggyback off a certain opponent’s strategy. If they deviate for just a single round, it’s possible I can swoop in to steal one of their combo cards. The lookout space provides me the opportunity to manipulate my deck composition without filling my actual deck with cards I no longer need.

As a mechanism, I love deckbuilding. The mechanism provides for an escalation of power; later turns are more effective than early turns. However I have often longed for a game that used the mechanism in service of something more. Trains came close, by using cardplay to build on a board of hexes; it still felt like I was doing deckbuilding and separately doing a board thing, however. Fort is the first deckbuilder I’ve felt where the mechanics of playing, discarding, and shuffling do not feel like the entirety of the game. In fact, Fort doesn’t feel like a deckbuilder at all. And for that, I love it.