Games for Little Kids: Pick Me Up, Piggy! and Stone Soup 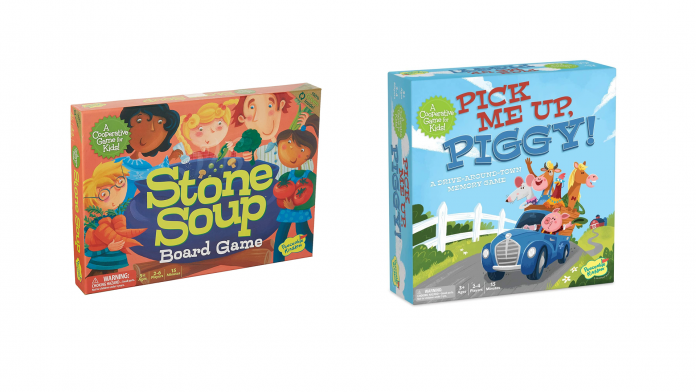 Playing competitive games with little kids is always a tricky affair. On the one hand, you want to teach them about losing and being a good sport, and to find fun even when they aren’t successful. You want them to learn that it’s OK to fail, especially in safe environments, and that when they do fail they need to try again. On the other hand, kids aren’t afraid to admit that they really don’t like losing, and will likely want to stop playing if they lose too many times (though “too many” can often be “once”). This leads to a difficult tug-of-war when it comes to games.

The big problem is that well, kids are really bad at games. They’re still developing the skills that will make them good at games, like manual dexterity or the ability to reason or think critically, and so most of the games you’ll play with kids, you’ll beat the pants off them in any kind of direct competition. This means your job is often to play down to your kid’s level to the appropriate amount, or cheat in their favor that they don’t notice but can feel good about playing. This is fine, but it’s also boring and it creates its own challenge – go too hard and your kid will get upset and stop playing. Go too soft and they’ll expect to win all the time. Note that I expect this is less of a problem for families with multiple kids, where you’ve traded off a large portion of your sanity and income to have more people of a similar age in the house, and they can just play with each other (and start fights over the outcomes).

Enter cooperative games, which have become much more popular in recent years and are the sole focus of Peaceable Kingdom. With cooperative games you can put most of these challenges aside and create experiences that are more fun, if not so much challenging for the adults in the room while being something that won’t leave your kid feeling like dad beat the brakes off them for the 8th time. In the interest of finding more of these experiences, I was recently gifted a pair of memory games: Pick Me Up, Piggy! and Stone Soup.

Pick Me Up, Piggy! 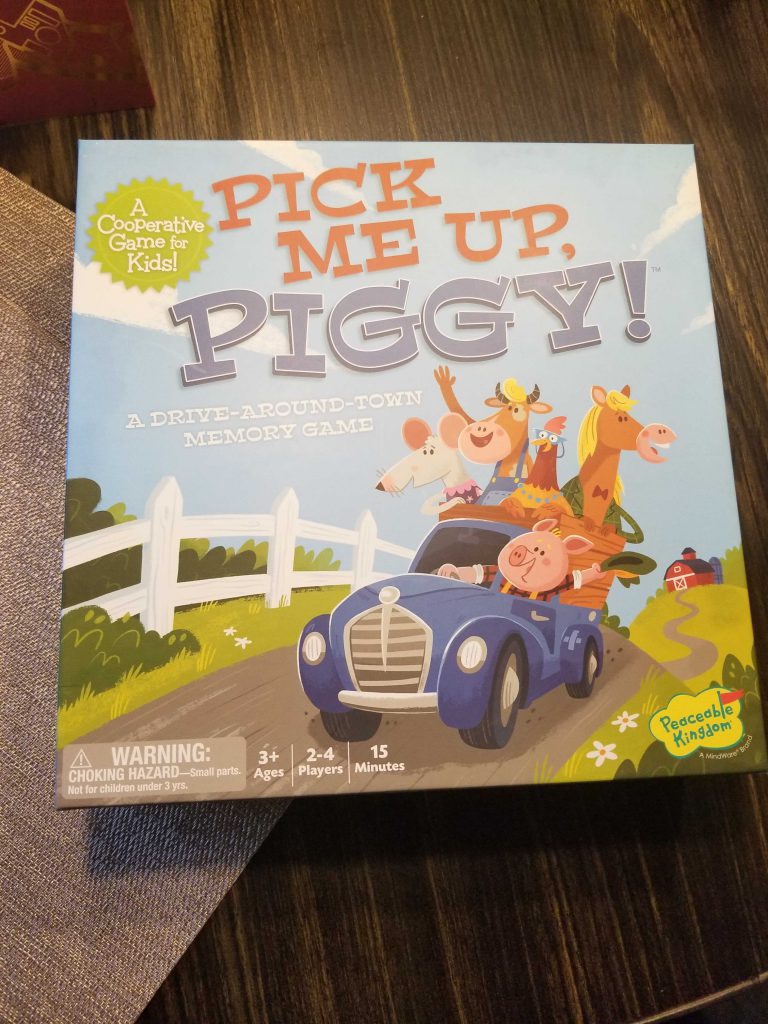 Designed for 2-4 players, Pick Me Up, Piggy is a simple memory game that takes about 20 minutes to play on your first game and maybe 10-15 after. The board is a simple map on which you’ll place four cardboard buildings – a dentist’s office, a paint store, a library, and a pizza parlor – accompanied by a wooden truck with four cardboard character figures (mouse, horse, chicken, and cow). 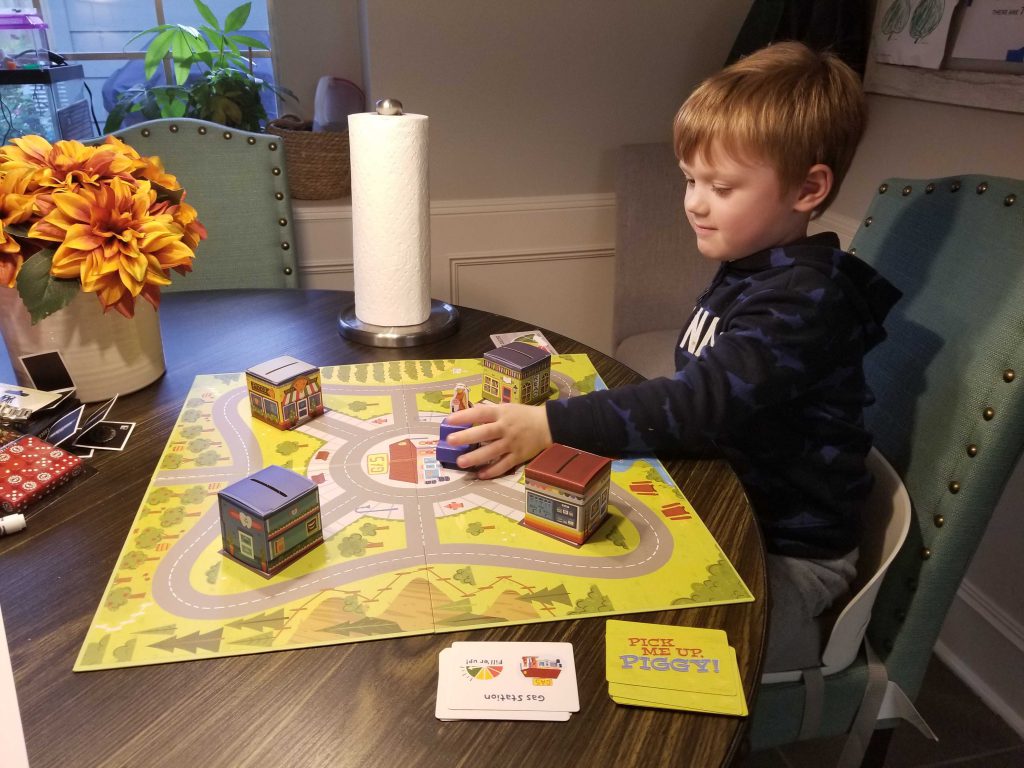 The game starts with Piggy dropping off the four animals – you can choose where – and you’re encouraged to tell a story about each, e.g. “Mr. Horse went to the pizza parlor because he had a hankerin’ for hay and carrot pizza” (this is a pretty clever way to teach kids a memory palace technique for remembering things). Once they’re all dropped off, you shuffle up a bunch of destination cards, and take turns drawing them. Each card has a destination for you, such as visiting the orchard or going to pick up one of the characters. Each visit to a destination costs you gas (you have a card to track your 5 units of gas), and each time you draw a character, you have to remember where they were and go pick them up, adding them to your car. Guess wrong and it costs you gas. Run out of gas and you lose, though there are a few cards that send you to the gas station to gas back up.

With the card distribution it’s very difficult to lose, though you may very well on the first 1-2 games if your kid has a bad memory. I found that by 4 games in Bryce would pretty much always nail the correct location of each animal, which meant losing just didn’t happen unless we got very unlucky with our location draws. He still likes playing this game even with most of the challenge gone, and it’s easy to sit down, set it up, play two games, then pack it back up again in 30 minutes, so that’s a huge plus. 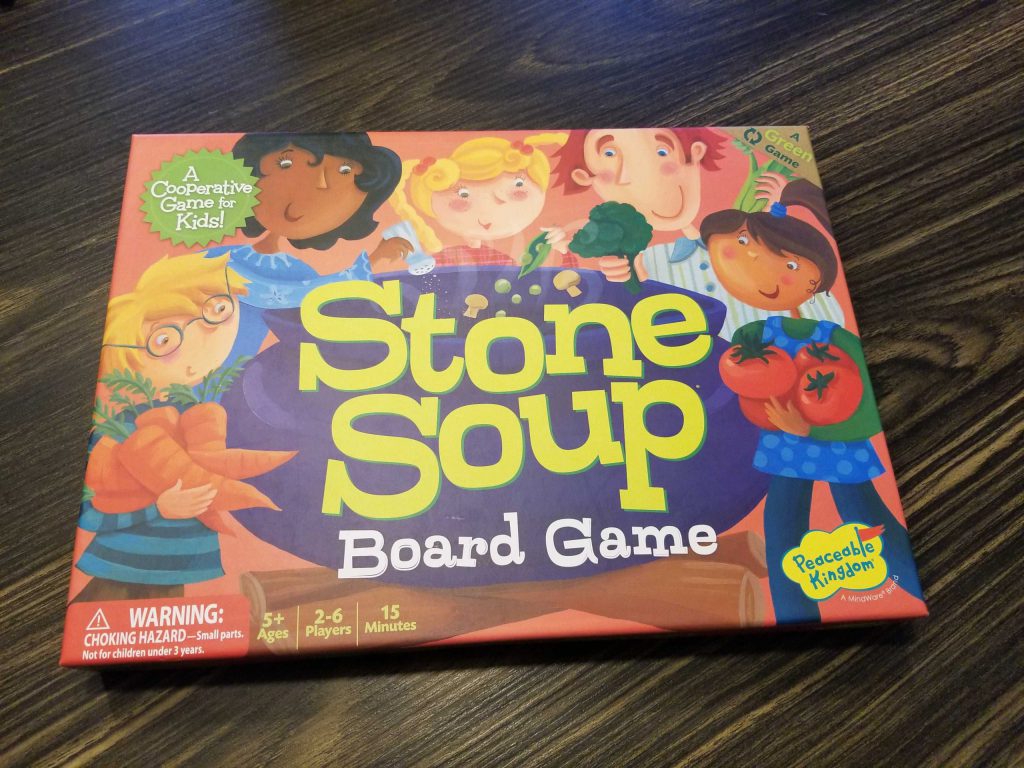 Based on the fable of the same name, Stone Soup sees you taking on the roles of villagers being conned into making the eponymous soup for tonight’s dinner. It’s another memory game, this time focused more on matching. It’s a simple set-up: unfold the board, shuffle the game’s tiles together, and place them face-down above the big pot. 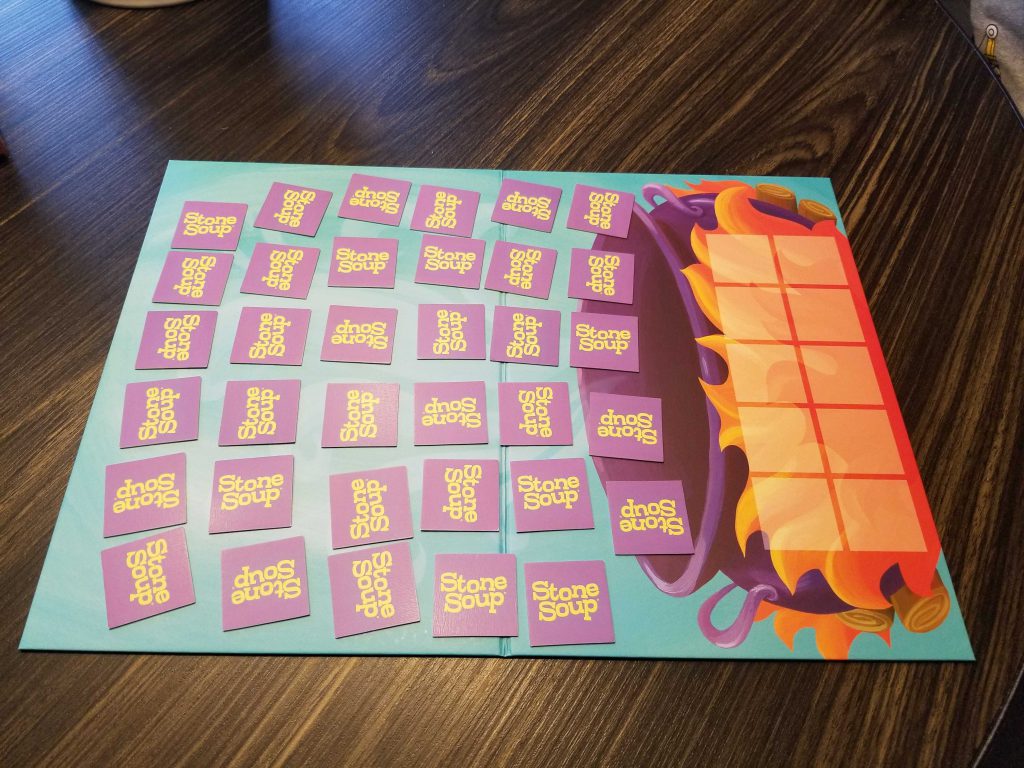 From there players take turns flipping over two tiles at a time, trying to find matches. Match two ingredients and you can put them in the pot. Turn over a Fire Out however, and it’s added to the two rows at the bottom. If you turn over every Fire Out before the soup is ready, the game is over – you all lose. 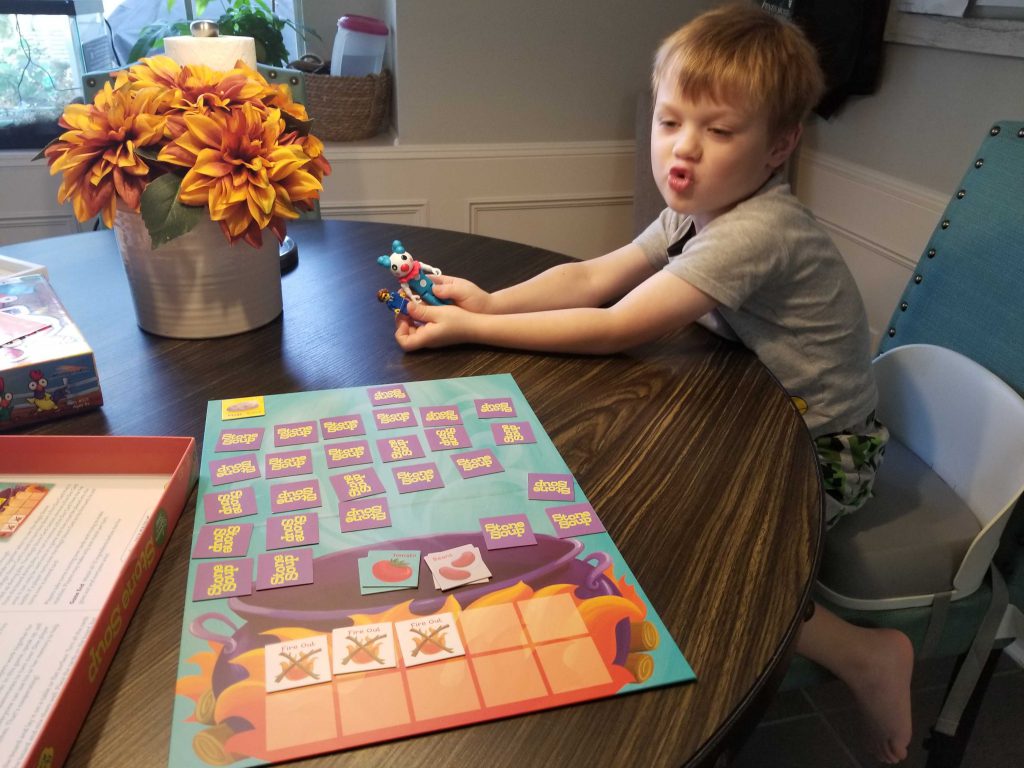 The exception is if you pull the magic stone, which can be held until you turn over a Fire Out, at which point you can flip it back over and then toss the stone into the soup. This essentially prevents you from losing in any game where you don’t just turn the fire out back over, which will absolutely happen with your kids. Otherwise, this is a fun matching game that helps teach kids a few words they might not use often, like “cabbage,” “celery,” and “no goddamit don’t turn that over it’s the fire out we just flipped.”

Stone Soup is more of a game than Pick Me Up, Piggy! but it takes longer to set up because of the tiles and so I like it less. It’s also a fine way to pass the time with your kids but not super challenging and so likely better for families where multiple kids will play with each other.