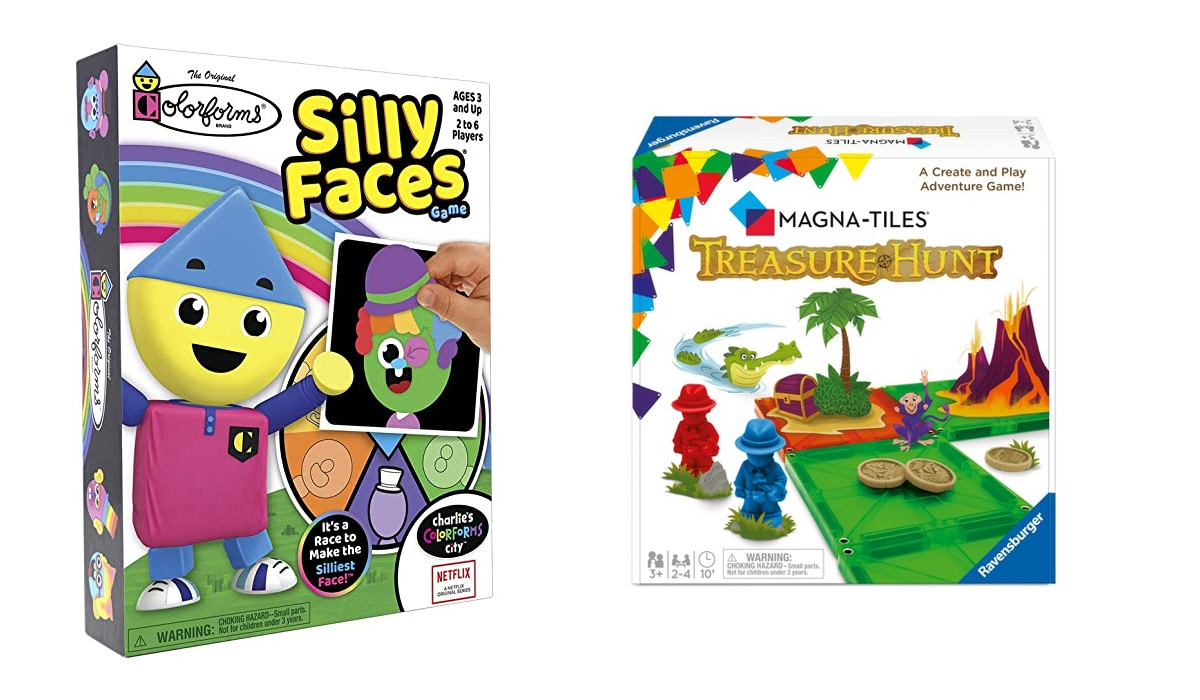 It’s been more than a month and we’re overdue for more reviews of games for younger children. Like a good absentee parent I’m making it up to you by bribing you with gifts – today I’ll be talking about two games instead of one.

As always, the context here is important: I have a four year-old son, and while he loves games he also doesn’t know how to read yet. He’s got a limited vocabulary, even more limited patience, and anything that requires arithmetic or reading instructions beyond the words “STOP” and “GO” are likely going to be out. So when we look for games, we’re typically trying to find things that appeal to him, are things he can realistically jump in and play, and that aren’t mind-numbingly boring for the adults. Extra bonus points if it’s a game we legitimately don’t have to sandbag in order to make it competitive, though so far Rhino Hero Super Battle is the only game to really hit that mark because it turns out that four year-olds build like psychopaths.

So this week we’re looking at two new games, one more a game of chance and one more a… well it’s kind of not a game? We’ll get to that one. 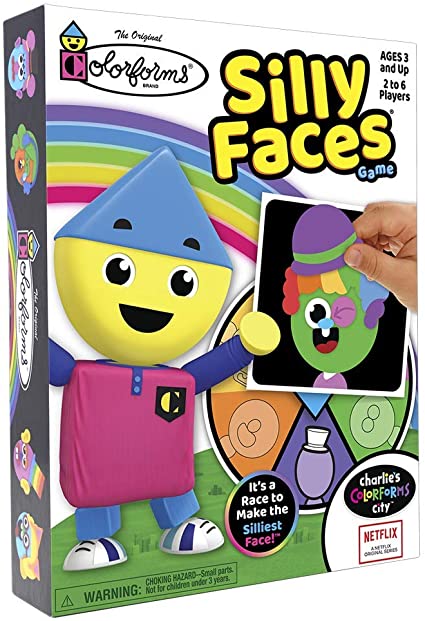 Charlie’s Colorforms City is one of those properties I wasn’t really aware of but that my son inadvertently discovered when Netflix previewed it after Octonauts ended and I discovered that he loved it. It’s a fine show with some good messages, but not something that has any appeal to older viewers. Anyways he likes it and that’s why he picked it off the shelf the last time we were at the friendly local game store. I’m always eager to share board games with him because it’s one more thing we can do together on a rainy day that isn’t based around a screen and so I typically say “yes” to these requests. 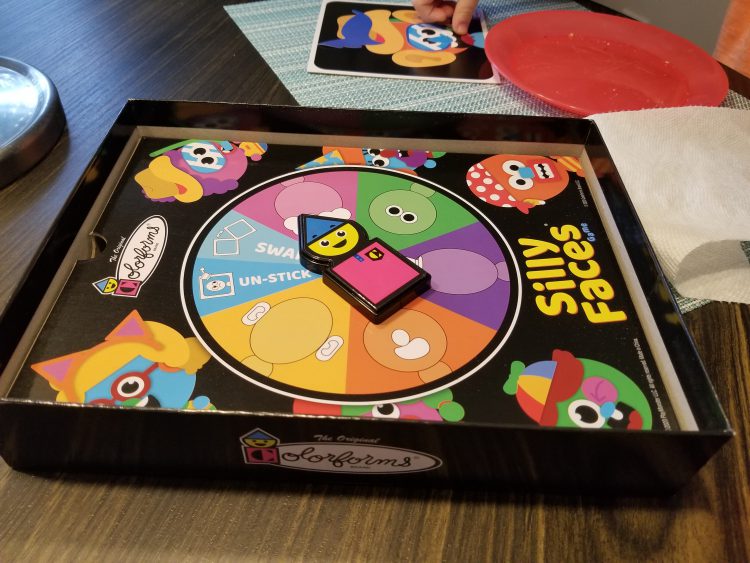 The premise of the game is very simple: You get a blank silly faces card and take turns spinning a spinner that then instructs you on what part to add your face. You then take one of the removable stickers off the provided sheets, add it to your face, and then pass to the next player. The game ends when someone has successfully completed a face. Get the same part twice and you have to swap your part for another one, and there are spaces that make you un-stick elements or swap your card with another player.

The face-building aspect is fun enough and it’s a good opportunity to teach kids the parts of the face – the elements you’re working with are eyes, nose, mouth, ears, hair, and hats. The game plays pretty quick, but there’s no skill involved so beyond the fun of making a face that’s incredibly silly there’s not a ton of replay value here. My son hasn’t gotten sick of it yet, though so it’s got at least half a dozen games worth of value in it. 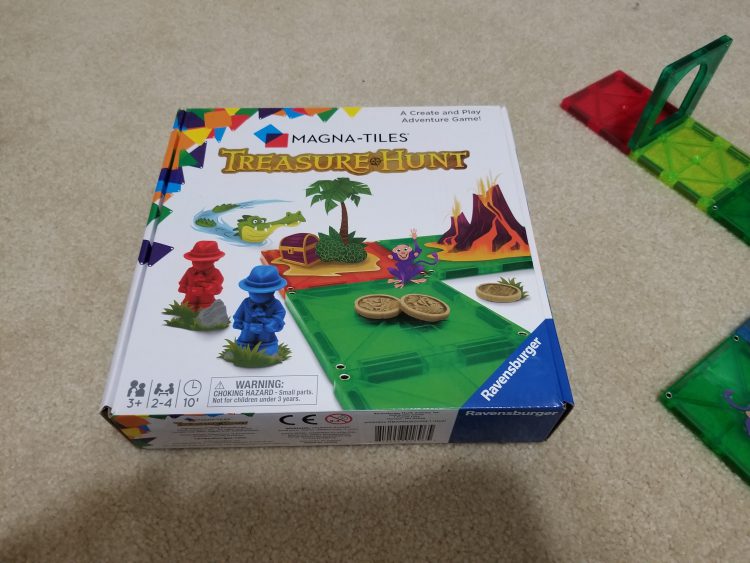 Magna tiles aren’t a toy that I had as a kid but if you’re a parent these days I’d put the odds at like 90% you’ve got some in your house. They’re pretty fun construction tiles to play with, they clean up more easily than LEGO thanks to just sticking together with magnets, and there are a bunch of different expansion kits for them that let you build cars and the like. They’re not quite as interesting to build with as LEGO but on the other hand you won’t hate your children for a week after stepping on one that was left on the carpet.

Magna Tiles Treasure Hunt is an interesting expansion for the line, creating a “build-your-own-board game” style set up for them. The kit comes with four adventurer pieces – two of which will get lost immediately, 10 tiles (3 orange, 7 green), some plastic coins, a six-sided die, and a series of re-usable stickers that can be put on the tiles to turn them into special squares – these include treasure stickers, palm trees, and a volcano.

From there, it’s up to you. The premise here is that you’ll build your own board games rather than work from a set of instructions. There are two games they do give you instructions for – Jungle Treasure and Monkey Race – and these are pretty straightforward. What they do give you is some ideas for how to use your special tiles and the pieces included. The big upside here is that if you already have a bunch of magna tiles (and let’s be honest, you already have a bunch of magna tiles), you can trivially add those to these to create larger, more interesting boards. The game play on these never really progresses beyond “Candyland” level strategy, but it does give you an opportunity to introduce concepts like moving a certain number of spaces – something my son took a while to pick up on was that each square was “one space” and how to translate that from a die roll. There’s also some good introduction to game design here – you can work out with your kid how to set up the board and where and how to place special tiles and what they might do or mean. That’s by far a more stimulating aspect than actually playing, though.

Most times we end up playing where the yellow tiles give you a gold coin and the monkeys and alligators take one away. The person who has the most gold at the end of the adventure wins.

Both games are alright. Charlie’s Colorforms City Silly Faces is more like a fun diversion for a session or two but I think kids 5+ will probably tire of it pretty quick. It’s really good for ages 3 to 4, though. Magna Tiles has been interesting, and I suspect we’ll revisit it periodically as my son becomes more interested in the dynamics of a changing game. I expect boards to become more elaborate, even as the game itself doesn’t get any more complicated. It’s more fun to build the boards with him than it is to actually play the game the boards create, and that’s not necessarily a bad thing. Manga Tiles Treasure Hunt is worth a look; worst-case you can just add to your collection of tiles.