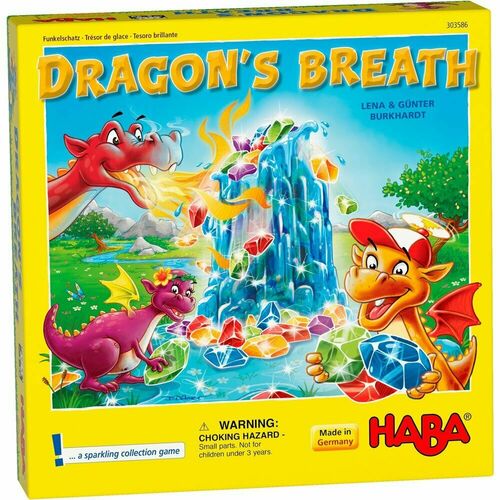 One of the more hit-or-miss aspects of being a parent with a young child is the introduction to games. As an avid gamer I’m incredibly eager to introduce my son to the games I love, but given that he just turned four, the number of games I can actually introduce him to are pretty limited. At this point he’s still learning the concepts of structured play – things like taking turns, repeating some actions, working with rules, and so games are best when they allow him to learn in a “safe” environment and also impose simple rules that he can easily understand and work with. When I say “safe” here I mean “without an ability to fail” – as much as he may love say, Mario, he’s bad enough at the game that if he’s playing solo it just ends up being frustrating for him – he’s still having trouble mastering jumping and moving in a direction and that’s kind of a deal breaker in platformers. When it comes to video games, titles like Untitled Goose Game are a better fit for him because it allows him to just explore and play with the environment and there won’t be a point where he ever gets a GAME OVER screen.

For board games, finding good games can be a bit more of a difficult prospect. Not because they don’t provide a “safe” environment, but because at the lowest levels they tend to be so mind-numbingly simple that they lose all meaning as a game and as a result, don’t teach the core concepts you’d want to build on for good game habits and understanding later. Fortunately, the folks at HABA seem to have figured out how to solve a lot of these problems. We’ve previously talked about Here Fishy, Fishy, a HABA game where players take turns trying to fish for various colors of fish using a magnetic fishing line – this is probably the game I’ll always recommend as your absolute first game – it’s simple enough to explain, helps with color recognition, and was the first board game I was able to legitimately play with my son. But the downside to the game being great as an introduction for three year-olds is that its core concepts are pretty easy to master – my son quickly picked up the core skill of “being able to land the magnet on the fish he wanted to catch,” making the game an exercise of rolling dice and taking turns. Now that he’s four, we needed a new game. So while I was at my local game store this past week for some last-minute gifts, I let my son pick a new HABA game off the shelf for us to try out. Naturally, he picked Dragon’s Breath, because it has a dragon on the box.

What can I say, the boy takes after me. 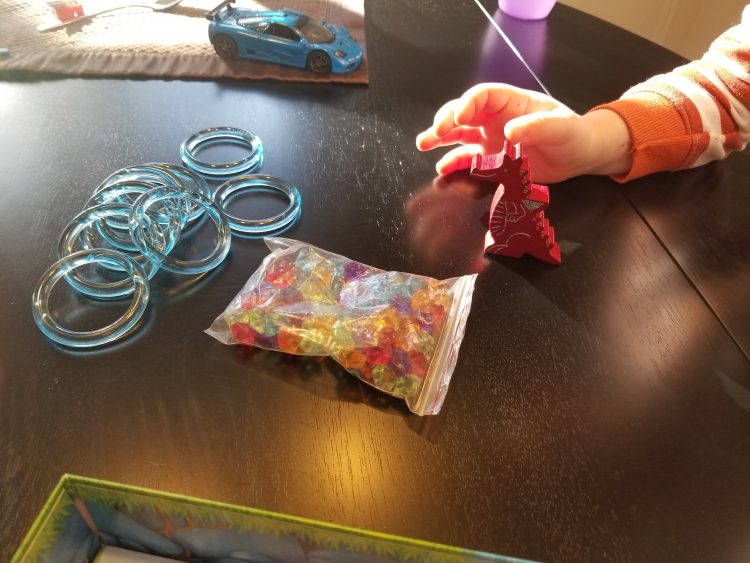 Dragon’s Breath is a game for two to four players. Players take on the role of dragon children attempting to pick up gemstones from a pillar of ice as their dragon dad melts it layer by layer with his fiery breath. In practice, this is done by constructing a pillar of plastic rings in the middle of the table, then filling said pillar with a bunch of plastic gemstones provided. NOTE: These gemstones are pretty small! Don’t get this game for a child under three, and don’t get it for a child who is still regularly putting toys in their mouth. They will eat these. 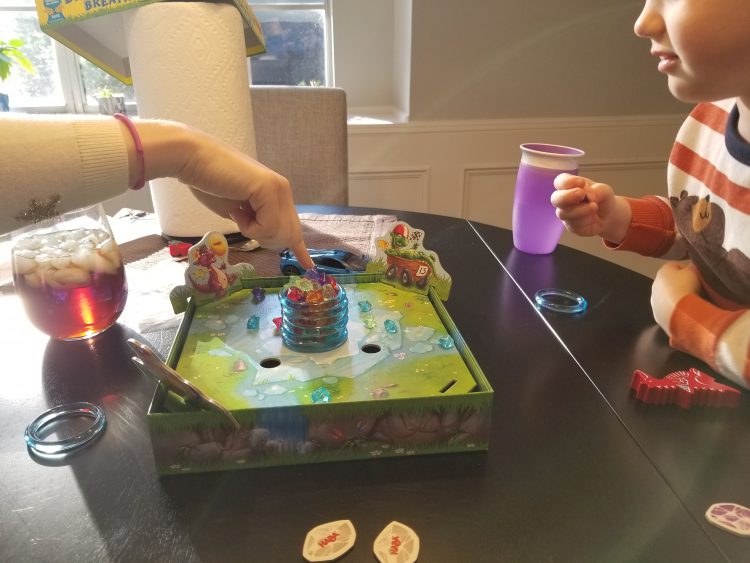 Players then alternate taking turns, choosing colors of gemstones to hunt for and then removing the top ring of the pillar. When they do so, gemstones fall out on the board (any that fall in the holes near the tower are lost) and players collect the color of stones corresponding to the color they’ve chosen that turn. This means that how many stones you collect is primarily random, but there are a few ways you can adjust play to mitigate this if you’re looking to introduce some basic strategy to the game. A big part of it is still going to be the coordination required to remove a ring and then identify which colors to pick up and put in your pile, so it’s also great for solidifying color concepts (the colors in the game are red, purple, orange, green, and blue).

The gems that players collect are placed in a hole behind their chosen dragon, where they fall into the storage area under the board (this is all neatly set up within the game’s box). After all the rings have been removed from the pillar, the players tally up the total number of gems they nabbed and the player with the most wins. In a given game you’ll usually end up with 10-20 gems barring some really lousy luck, and that means opportunities to count with your child multiple times and explain concepts like “more” and “fewer,” which is cool too. 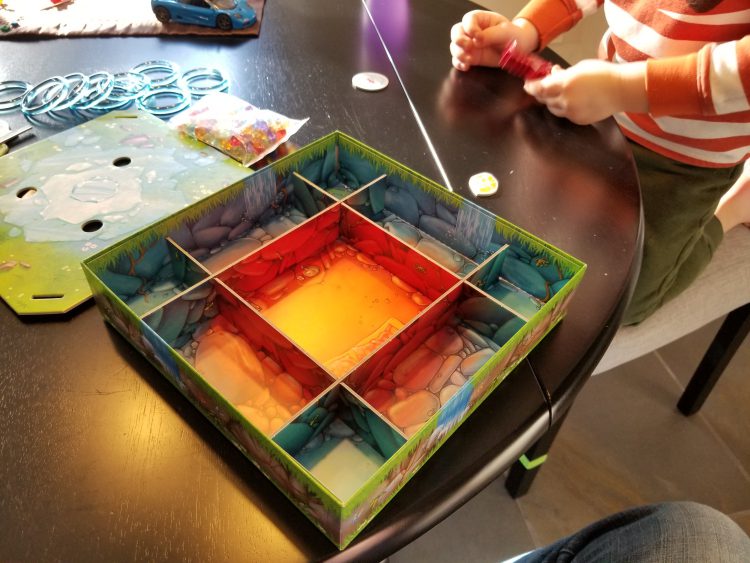 Dragon’s Breath isn’t the most complicated game but my son loved it. It’s not entirely mind-numbingly bad for an adult to play, and it encourages counting to numbers between 11 and 20, which are currently something we’re still working on (the boy loses steam around 13 at the moment). We played three rounds with each taking about 10 minutes and he’s been begging us to play more since, so I’d call it a big win for us and worth the price. I’d recommend it to anyone looking for a way to get their young child into board games and teach them the basics of taking turns and play sequences. At the very least, I’m glad I bought it and expect I’ll play at least another dozen times over the next week.