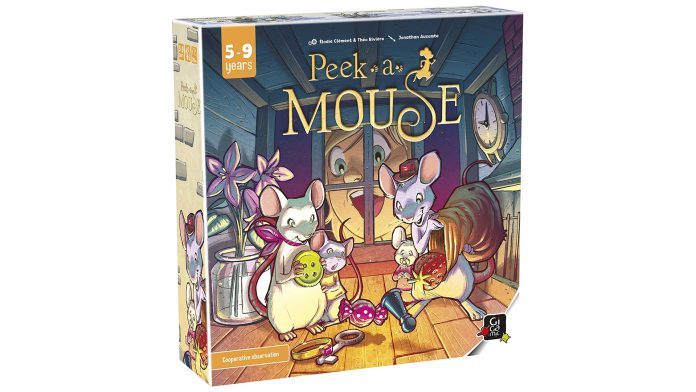 Cooperative games for little kids can be a bit of a mixed bag; if the game is too hard the adults end up doing all the work and if the game is too easy it becomes more of a slog as you sit around watching your kid try (and fail) painfully to figure things out. So when a legitimately good co-op or semi-co-op game comes around that we can all play well together, it’s worth talking about.

Peek-a-Mouse is a memory game that’s equal parts memorization, detective work, and voyeurism simulator. The box itself becomes the board, containing a miniature home for the game’s titular mice, who have “borrowed” a variety of household items from your house. Each round, players drop a series of item tokens into the box, which is split into four rooms – kitchen, bedroom, bathroom, and study – and then turn on the light that slots into the top of the box.

The light stays on for around 60 seconds, during which players have to look for the objects that were dropped inside, note their locations, and remember them.

Once those 60 seconds are up, players then answer randomly generated questions about the objects and rooms of the house, such as “what room was the bottle cap in?” or “which objects were in the bathroom,” or “was the candy in the same room as the comb?” Scoring is done based on how many questions you get correct, and the goal is to attain a perfect score over a number of rounds.

Even on the easiest mode, this is pretty tough! The questions mix it up every time and make it a real challenge to get a perfect score, and there’s enough going on that kids can be legitimately helpful spotting objects and remembering stuff. And as you get better at it and need more of a challenge, there are multiple difficulty levels built into the game, adding more objects and more difficult questions.

If there’s a downside to the game, it’s that it’s kind of a pain in the ass to set up, and has a lot of pieces to keep track of, plus the physical aspects make it kind of a strain on the eyes. On the other hand, it’s a completely novel experience compared to the other games we’ve played. We’re kind of at the limits of what games my son can enjoy without knowing how to read competently at this point and while he’s making good progress it’s good to find something that we can play together well that doesn’t require that yet. Peek-a-Mouse is worth a look for parents looking for something in that “don’t have to read yet” category of games. It’s legitimately more challenging than all these other co-op memory games.