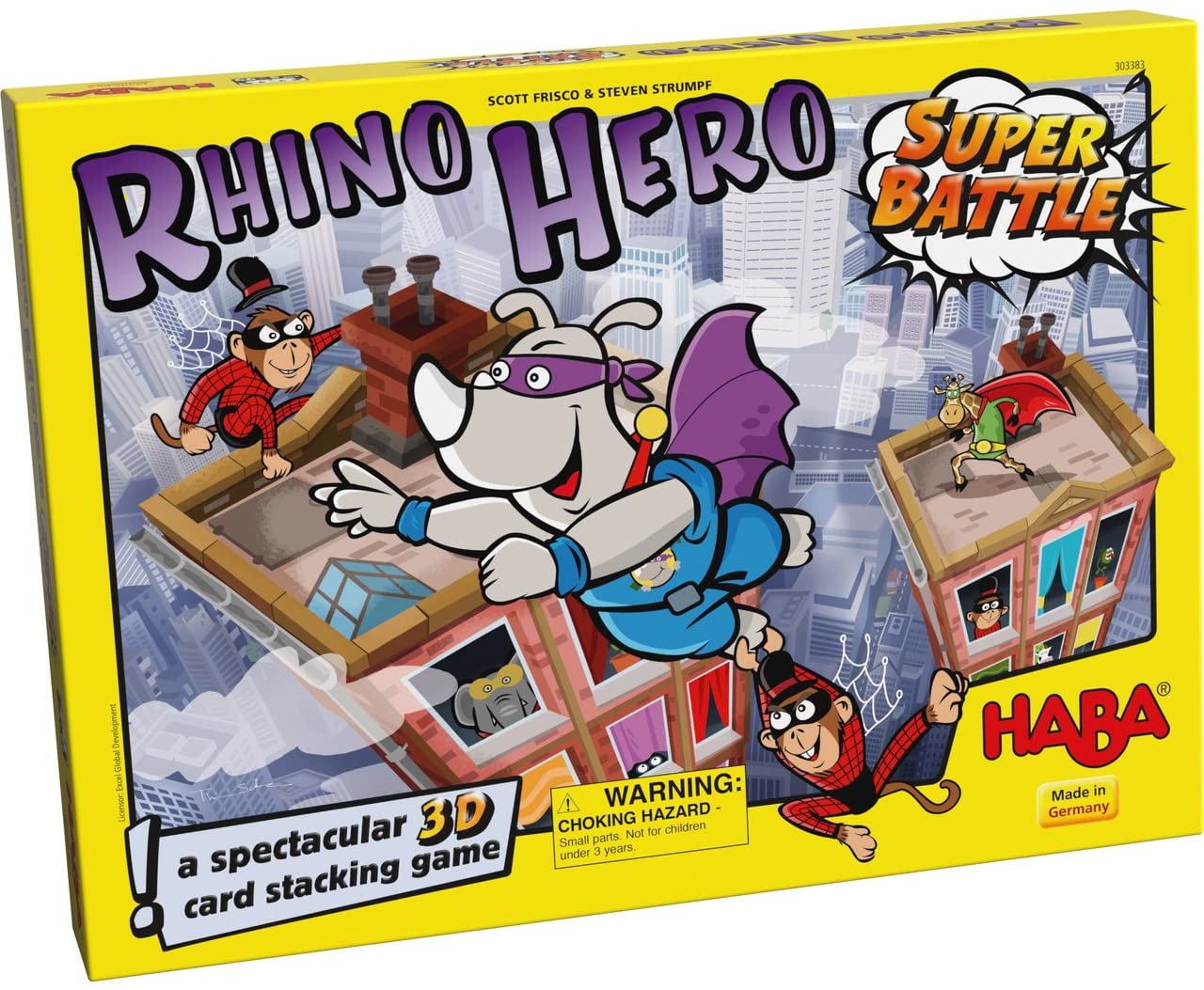 I’ve written before about the challenges of introducing a small child to board games, specifically in my review of Dragon’s Breath, another HABA game designed for young players. In the short time since that was written my four year-old son has developed an astonishing amount. He is now much more comfortable with some of the dynamics around winning and losing, understanding what those mean, and is starting to grasp things like “win conditions” in games. He’s still a bit too young to power through games with fail states (we’re just getting to where he can beat some very simple levels I make for him in Mario Maker), and he probably won’t be reading for a while, so we’re still looking for games that focus more heavily on visuals and a physical coordination component and that will help him learn and understand game mechanics. Rhino Hero Super Battle helps him do both, while also being the first kid’s game we’ve picked up that my wife and I actually enjoyed on its own merits.

The basic premise is that each player takes on the role of a different Super Hero—one of which is the titular Rhino Hero—attempting to build a mighty skyscraper and be the one atop its highest floors. Meanwhile, the building is under attack from the dreaded spider monkeys who can bring the whole thing crashing down. When that inevitably happens, the hero who was at the highest position wins the game, unless they’re the one who caused the collapse. In that case everyone else wins (Note: this means that parents who want to push easy wins to multiple other players have a great avenue for throwing the game).

Set up begins with a trio of foundation tiles that make up the game floor. Players then choose a hero and are given three floor cards. Each of these cards acts as a “floor” tile that tells you how to place it on top of folded sections of card that make up the building’s walls. These come in short and tall varieties, with one tall wall section being twice the height of a short section. Players build the tower by placing these wall sections on either the foundation board or an existing floor card, then place their own floor card on top. Some cards have spider monkey symbols on them, which have you either place or move a small cardboard monkey chit up to your newly placed floor, where it must be placed hanging from the side. This can can be a delicate balancing act as you get higher up. Once a player has placed their floor card, they roll a die to see if they move up or down on the tower (results here range from -1 to 3 on a 6-sided die). If they end up on the same floor as another hero they “fight” by rolling off, with the loser getting shoved down. Whichever hero is currently at the top gets a medal to denote their status.

For kids the excitement of the tower crashing down is going to get laughs but for adults building the tower is the game’s real fun – placing these cards can quickly become a tricky proposition and for parents half the challenge is going to be trying to keep things stable as your children, bereft of any notions of “structural integrity” or “balance” inevitably build in the riskiest way possible and work as hard as possible to lose the game. You can combine long and short walls to build on top of other players’ floors and having to balance a spider monkey on top of your newly-added floor when you’re already 5+ levels up can be legitimately tense. The thing that doesn’t work so well is the climbing mechanic – having a random climb result is fine, but there are too many negative or static results on the die, and too many games have started with no one moving up the tower for several turns, which is kind of boring. The upside is that having a “-1” result gives you the opportunity to teach a bit of subtraction/negative number arithmetic, which has worked out well so far in my house.

Things to Consider/Watch out for:

On the whole Rhino Hero Super Battle feels like a smarter Jenga, and the fact that you build up rather than starting with a completed building means that set up (and clean-up) is much less tedious and that games will be different every time. It has quickly supplanted Dragon’s Breath as my son’s favorite game and it’s one we’ll be returning to for game nights soon, though we’ll probably take up playing it on the floor at some point just to make things easier. It’s well worth the $15 we paid for it at a local game shop and it’s a great next step from Dragon’s Breath. Unlike Dragon’s Breath however, this one is likely to be one that we revisit again as he gets older, if only because the results aren’t completely random – it’ll be interesting to see whether he picks up on this, and when the first notions of strategy start to take hold.

Rhino Hero Super Battle is the sequel of sorts to the original Rhino Hero. Both share tense tower building kineticism though are quite different in their implementation. Where Super Battle sprawls horizontally and features multi-level haphazardry, the original sees players building a single tower as tall as they can. Floor cards have Uno-like symbols that will skip turns or force players to act twice. Ostensibly the goal is to empty your hand first, playing tricky floor to your opponent and moving the Rhino playing piece up the tower; in reality it becomes a game of “how high can we build this” and “oh woah the air currents sure are different 4 feet above the table”.

Depending on where you shop the original Rhino Hero comes in at about half the price, and is in a much smaller box. It fits in a back pocket or small purse, and its footprint is tiny; you could theoretically play on an airplane or train tray table though I can’t imagine it would be successful. Both options are fantastic for kids and adults; you can’t go wrong with this family of games.