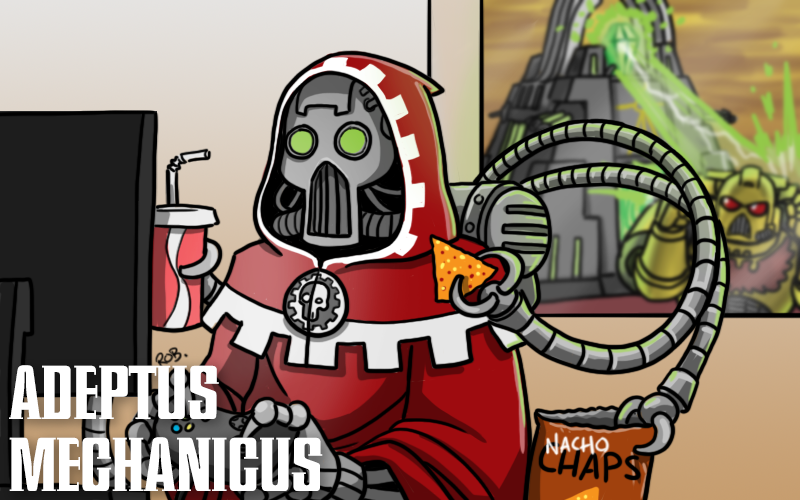 Who are the Adeptus Mechanicus?

From the moment I understood the weakness of my flesh, it disgusted me. I craved the strength and certainty of steel. I aspired to the purity of the blessed machine. Your kind cling to your flesh as if it will not decay and fail you. One day the crude biomass you call a temple will wither and you will beg my kind to save you.
But I am already saved. For the Machine is Immortal.

Stripping themselves of the undue burden of organic components, followers of the Adeptus Mechanicus worship the Machine God in any way they can. From the simple act of being a nameless cog in the great forge worlds, to the holy acts of sacraments performed upon the blessed Bolt Rifle before battle, the AdMech is pervasive throughout the Imperium, but also a wholly distinct group on their own.

They’re also a great faction to collect. They have some of the most unique models in all of Warhammer 40,000 and some of the strongest firepower that humanity can wield in the Shooting phase. But don’t think that having incredible guns means they don’t have equally incredible melee. They have a little bit of everything, and they are a great faction to get started with.

In this article, I’m going to lay out some of the highlights you can expect when first embracing the Omnissiah, as well as some of the tribulations you should anticipate when appeasing the Machine Spirit.

Here are some are some high-level strengths and weaknesses you should know about before diving into an Admech army.

What Books to Buy

With the release of 9th edition Codex: Adeptus Mechanicus, there’s only one book you need to buy. Pick it up and get ready to rumble! We’d also highly recommend picking up the faction’s Datacards, which will give you easy ways to remember and track which Canticles and Doctrina Imperatives are active, and give you reference to the faction’s many stratagems.

That said, if you want to expand your forces and are considering a Metalica forge world army or adding knights, you may also want to pick up War Zone Charadon Act I: The Book of Rust. The Book of Rust gives you a supplement’s worth of rules for forge world Metalica armies, which includes rules for adding knights from House Raven into your army with the Knight of the Cog Stratagem. It’s worth grabbing if you want some more options, but if you’re just going to run Mars, it’s not something you need.

Fortunately, getting started with Admech is pretty easy, with the one-box option of Combat Patrol: Adeptus Mechanicus. This gets you an Enginseer, 10 Skitarii, 3 Kataphrons, and a Onager Dunecrawler which will give you a good introduction to the Omnissiah. There are two previous bundles that you might see, hidden away at your friendly local game store: Start Collecting! Adeptus Mechanicus and Start Collecting! Skitarii. These are both out of print now, but you can occasionally find them at MSRP which makes them a great deal.

Almost all Adeptus Mechanicus models have the <Forge World> keyword, with the only current exceptions being the Secutarii Hoplites and Peltasts. When building your army, be sure to take into consideration which Forge World you will be using, for each grant a different set of passive buffs, unique strategem, warlord trait, and relic. If you interested in fielding Belisarius Cawl, then you’ll probably want a significant part of your army to be Mars to take advantage of his abilities that are locked to Mars – otherwise the choice is pretty free, as Ad Mech have no other Forge World-specific characters.

There are seven standard Forge Worlds to pick from, as well as rules for building your own custom Forge World. Each of these choices offers a different play style for your army, from the deployment shenanigans of Stygies, to the extra armor penetration of Agripinaa, to Mars which lets all of your Skitarii gain the benefits of Canticles of the Omnissiah in addition to their Doctrina Imperatives, which can be a force multiplier on it’s own. And by now you might be wondering just what are Canticles and Doctrinas, so let’s dig into them.

Simply put, at the start of the round, you can pick one of the four Doctrina Imperatives to be active that round:

All Skitarii in your army gain the optimisation but also suffer from the deprecation. If you are clever, you can use a Skitarii Marshall to cancel out the deprecation effect on a single unit in a key turn, taking your opponent off guard.

Each of these Doctrinas may only be taken once, and you may also choose to not select a Doctrina at all. This means you will necessarily have at least one round each game without a Doctrina. This makes strategic use of these incredibly important, and something you’ll want to practice with to figure out what style works for you. Early game sprint into your opponent’s line, or hold back and defend? Long range shooting, or up in their face combat?

Cult Mechanicus and Canticles of the Omnissiah

Similar to the Skitarii’s Doctrinas, all units in your army with Cult Mechanicus keyword gain access to Canticles of the Omnissiah. These two abilities function almost identically; at the start of the round you pick a Canticle to be active that turn, and then everything with the Canticles ability gains that benefit that round. Picking a Canticle is also optional, and you can’t pick the same one twice making them another strategic resource to plan around. Fortunately, Canticles don’t come with a deprecation effect, it’s all positives!

And because this faction isn’t complicated enough, there are a couple ways of manipulating Canticles. First and foremost, you have Mars, which grants the Canticles of the Omnissiah ability to all Skitarii units. Yes, this means you are applying two sets of buffs to your Skitarii. Yes, this makes them very powerful. Yes, it’s good and complicated, go try it! Additionally, there are three ways of manipulating Canticles for individual units: Belisarius Cawl‘s Lead in Prayer ability, as well as a Mars-exclusive strategem, and a strategem that is available to any Tech-Priest. This means you have a huge variety of options each turn to plan around.

Imperial Knights? In My Admech?

While this is certainly a fun and fluffy combo, there are reasons why you don’t generally see it at tournaments. Imperial Knights are in a pretty rough spot in 9th edition, and you have to spend between 3 and 6CP in order to field both Admech and Imperial Knights in the same army. It can sometimes be worthwhile, however – a singleton Knight still plays a role in some lists, and more commonly AdMech offer some great ways to shore up the very significant weaknesses of a Knight army, with the use of Serberys Raiders and Skitarii to act in the light skirmishing and objective-grabbing role that the big lads can struggle with.

Though Admech is a pricey faction to build, that doesn’t prevent you from getting your first game in without breaking the bank too badly. The Combat Patrol and Start Collecting boxes are both great deals, and with just a few other kits, you can put together a 1000 point army in no time. Just note that both Start Collecting! boxes are out of print, so prices on these can fluctuate.

Where To Go Next

There are a lot of options available to continue building your army. Fortunately, Admech’s codex is filled to the brim with great options, so almost any box you pick up in the future will have some place in a solid army. In no particular order, here are some good picks to look at when filling out your army.

Somethign to keep in mind is that many of these units are cheap (in points) and expensive (in dollars) at the same time. Frequently, the strongest way of taking them in spamming large units, 5x Ironstriders, 20x Skitarii, etc. This is where the money-intensive aspect of the army comes in – whatever you want to build, you are probably going to want a lot of it. It is gonig to be time-consuming to build and paint, and you are vulnerable to having a ton of expensive models that then fall out of the meta or get significantly changed in a new codex. If you love the faction that isn’t so big of a deal, but do think about it before you buy in hard.

THE HELL I CAN’T!

– Archmagos Belisarius Cawl, when a Space Marine dared to question him.

AdMech is a fantastic faction to collect and play, full of awesome firepower and amazing models, and we hope you now have a head start on Getting Started with Adeptus Mechanicus. If you have any questions of feedback, drop us a note in the comments below or email us at contact@goonhammer.com. If you’re a patron, head on over to our Discord and chat with us!