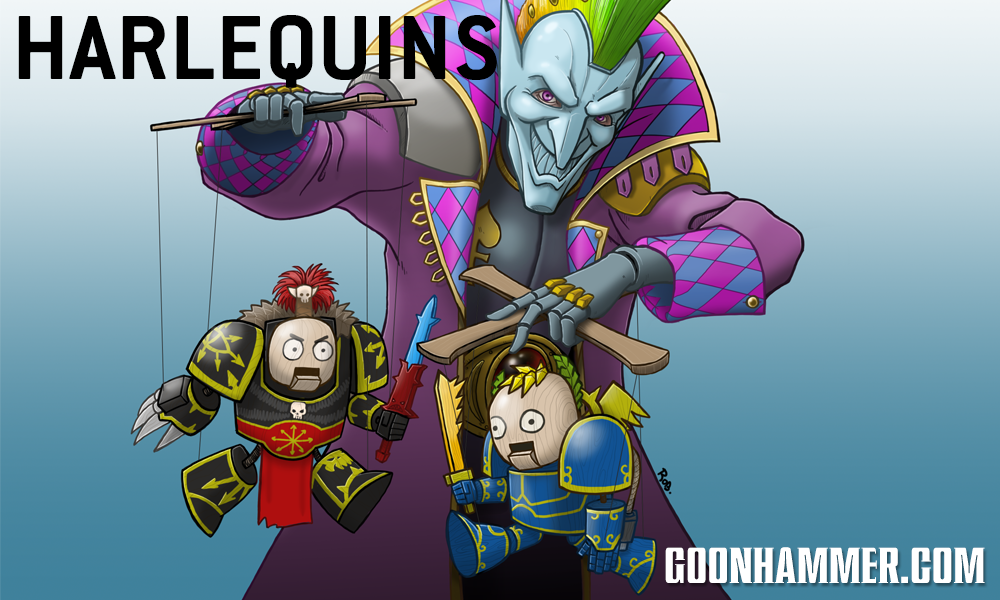 Who are the Harlequins?

Among the ancient Aeldari race the Harlequins are a unique and enigmatic group, owing their allegiance to Cegorach, the laughing god, and no one else. This group of highly-skilled warrior-dancer-actors work with the aspect warriors and farseers of craftworlds, the kabals of the Drukhari, Exodites, and Corsairs, helping shape the destiny of the Eldar race. They also frequently meddle in the affairs of other races, and have been known to work with Inquisitors, traitor marines, and even Sisters of Battle from time to time, always in the interest of furthering the Laughing God’s plans in the long war against Slaanesh.

In the time before the birth of Slaanesh, Harlequins served as a kind of roving street performers, but in a very performance-art way that served to needle the then-hedonistic Eldar about how completely shitty they’d become as a species. This did not go over well, and the Harlequins ended up also learning to be expert fighters so they could escape from their own trolling performances with all their limbs intact. When the race fell and caused the birth of Slaanesh, the Laughing god escaped and spirited the Harlequins into the Webway, where they went on to prepare for an eternal war with the newly birthed Chaos god. They also probably yelled a few “I told you sos” on their way out too.

The Harlequins aren’t really a race among the Eldar but are more like a shadowy cabal that lures in new members via what looks like sorcery to most, including the Eldar. New recruits leave their identities behind and don masks, joining theatrical groups of warrior-performers called troupes led by avatars. Get a few of these together and they form a Masque. In Eldar society, the Harlequins are known for performing a dance that re-enacts the fall and the great war the Eldar must fight against Slaanesh. This is called “The Dance Without End” and requires a Solitaire, who are the only Harlequins allowed to play the role of She Who Thirsts and as a result are considered weird and kept distant even from other Harlequins.

The Harlequins are one of the few groups in the galaxy who know the way to the fabled Aeldari Black Library, a collection of all of the race’s knowledge of Chaos, and Solitaires among the few who are allowed to enter the Library as they please.

In-game, they’re a faction which epitomises Warhammer Elves – the rules are made for other people, and they bring a mix of powerful combat options with high-quality precision firepower. 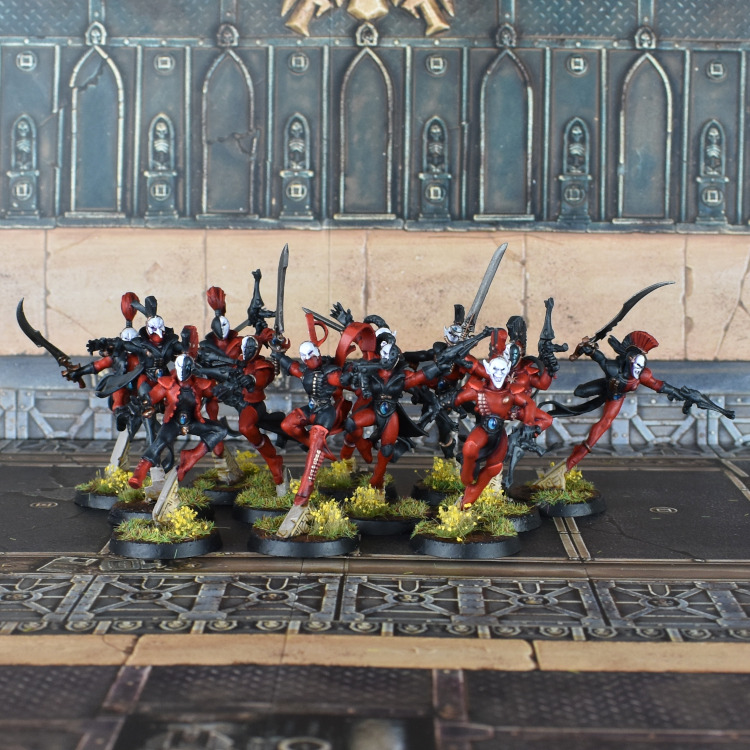 As you’d expect from an army with less than 10 datasheets, Harlequins are pretty much restricted to just their Codex. Late in the release cycle for Psychic Awakening, it was announced that they wouldn’t feature in any of the main line books, but instead get a rules update in White Dwarf. We were trepidatious about this at the time, but as it turns out it’s a good thing – the update is great and adds a ton of capability to your clowns, and since it’s in White Dwarf you can buy the digital edition for a fiver (or local equivalent) and not have to cart around a hardback book that mostly contains rules for two other armies in it. With no sign of an updated 9th edition codex in sight, we would recommend you buy this alongside the codex and just treat them as the same thing – it’s the best deal on rules content you’ll ever get from GW in terms its cost vs. its impact on how amazingly good it is for your army.

If you’re the kind of person who really likes printed materials, there are also of course the Datacards set – though naturally they’re missing the WD stratagems and such. 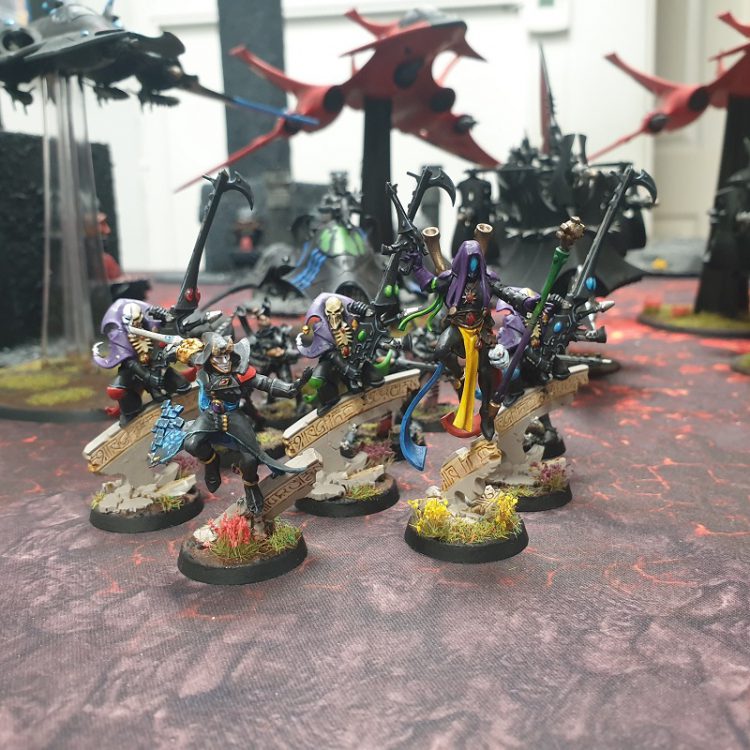 Unlike other factions, Harlequins are absent any kind of Start Collecting box, which is a shame. They’ve also not shown up in any starters or battle box type affairs, so no luck there.

Happily, the Troupe box was the first iteration of a concept that Games Workshop repeated later with Adeptus Custodes, where the HQ choice is just part of the basic Troops choice. What that means is that you can buy one Troupe box and build a Troupe Master and five Players from it and ta-dah, you have a game-legal Harlequins Patrol detachment. Add a Starweaver for them to ride around in and you have a great foundational building block for an army.

Something worth thinking about early on is weapons options. The melee weapons are pretty much all as available as they need to be in the aforementioned Troupe box, but many current Harlequin lists are very heavy on fusion pistols for their Players, and those are 2 for every 6 in the box despite being available to every single Player. Obviously this makes them quite rare to begin with, plus Harlequins are a small and not especially popular faction and the fusion pistol is a great pick that people are going to keep hold of, so they don’t really show up on bitz sites. I’m not about to sit here and tell you to buy 3 boxes for every squad – if you’re planning on going hard on fusion pistols, then look for 3D-printed equivalents, because there’s no economic way to do it otherwise.

After that, the world is your oyster, as long as you like your oyster to be about 6 kits. An easy way to expand is to buy a Shadowseer, a Death Jester, and a Solitaire, which gives you a full complement of characters to choose from. Otherwise you’re pretty much looking at buying more Troupes, some Skyweaver Jetbikes, and more Starweavers – basically all you want to avoid is the Voidweaver, which doesn’t do much, and the Webway Gate, which does even less.

To give you an idea, here’s a sample 1000pt list that you could aim towards:

That comes to about 980pts, which means you have a few points spare for melee weapons on your Players. On the Shadowseer you can take double Pivotal Roles using the stratagem for an extra one to keep her Shield from Harm aura as well as the Veil of Illusion for -6″ to ranges – helpful in the tight confines of an Incursion board. She can additionally take the Shadowstone to make her aura 9″ instead of 6″. The Troupe Master is pretty much stock except for wanting to spend a CP for the Twilight Fang, which makes him a horrendous blender. That should leave you with 3CP to begin the game with, and a tough core of 3 Starweaver transports and some Skyweaver jetbikes to add some anti-vehicle and melee punch.

In terms of army trait, you have an array of choices, but Soaring Spite is a good pick here to allow the Troupe Master to disembark after moving, and for the Starweavers to advance and allow the pistols to be shot out of the top which will ensure you get in range with them.

From here, the obvious route is just to add more of what you have already – a couple more Troupes and Starweavers, and a lot more Jetbikes. One other fun alternative is to look at the Ynnari characters – the Yncarne in particular is a great addition to a Harlequins army, offering a surprise mobile melee threat in a different weight class to the rest of the army. Just be aware that you can’t put the Solitaire and the Ynnari guys in the same detachment!

If you are thinking about getting into Harlequins, we talked about painting them here in our How to Paint Everything Series. We also have a Start Competing article online for them, but based on the pre-Psychic Awakening codex – we are planning to update it soon to look at all the changes plus the impact of 9th edition!

That’s everything for Cegorach’s Chosen. Harlequins are a small but perfectly formed faction, with a fast, fun playstyle which is well-suited to 9th edition. You can take them for fun in casual games, or take them right to the top of the tournament tables – it’s a good time to be a clown. As ever, if you have any feedback or commentary, hit us up on Facebook or Twitter, or e-mail us at contact@goonhammer.com.