Getting Started: Kings of War – What is it and Why You Should Play

Are you an old player of Warhammer Fantasy that didn’t burn your models with the introduction of Age of Sigmar? Do you look at your hours spent playing the Warhammer: Total War games and wish you could recreate its look on the tabletop? Or are you a historicals player that just wants to add a dragon to your Roman legions? Then Kings of War might just be the game for you.

Welcome to a new series for Goonhammer from us, JP and Matt. In this series we’ll be talking about – and hopefully convincing you to play – Mantic Games’ Kings of War. This week we’re starting with an introduction to the game and next week we’ll dive into the game’s factions.

What is Kings of War?

Kings of War is a tabletop wargame of mass combat between a vast selection of fantasy armies created by Mantic Games. The term ‘mass combat’ refers to how gameplay revolves around the combat between units rather than between individual models (as opposed to ‘skirmish combat’). That’s not to say there aren’t individual heroes and monsters, but the crux of the game is the maneuvering and smashing together of units.

Like the late Warhammer Fantasy Battles, Kings of War is commonly referred to as a ‘rank and flank’ wargame. This describes both the ranked up nature of the models in each unit, but also the importance of unit positioning and getting that ever-sought-after flank charge.

Why play Kings of War?

Kings of War is a deeply tactical game aided by the simplicity of its rule set. It allows you to represent all the great battles of classic fantasy and run through them in an afternoon without sacrificing depth or fun. Positioning and maneuvering is vitally important, and where your skill can shine though, but there remains the randomness of all dice games. A lucky roll can see the collapse of a flank, while conversely, an unlucky one can see the enemy hold against all odds, giving a game that cinematic feel.

There will be moments where ranks upon ranks of infantry clash shield and sword, or titanic demons will sow ruin through desperate rabbles. Other times through deft tactical play, cavalry will plow into the flank of gibbering horrors, while the dark overlord is deftly smitten by a well-aimed lightning bolt from the opposing wizard. Assassins deftly weave their way between the clash and clamour of battle, and artillery rain down deadly projectiles on key targets.

We could go on, but we really want to emphasize just how epic Kings of War can feel when a battle is underway and the imagination gets going (aided by caffeine and/or sugar). What helps with this is that you can make almost any fantasy army you like – there will be rules that fit it!

If this has got you excited, here are four detailed reasons that Kings of War is a fantasy battles game worthy of your attention:

1. A simple but deep game design

As they say for Chess, “a minute to learn, a lifetime to master.” The main rules for KoW are laid out very clearly and simply, in an easy-to-read fashion. The game’s main rules – covering everything from how to play to unit types to the battlefield, magic items, and scenarios – runs 63 pages out of the rulebook’s 390 total. A significant chunk of these have been devoted to examples, helping demonstrate how the rules are put into practice and helping those of us who find words alone insufficient to convey proper tabletop application.

As you’d expect from a rank and file game, the movement is the most complicated part of the game, and it takes up 6 pages in the main rulebook, covering all movement options, from moving around terrain to engaging the enemy, and does it simply and concisely. This doesn’t mean that the game is shallow though; in our first few games we were constantly surprised by movement tricks that we hadn’t even considered the possibility of doing. That said, the simple design makes the game easy to pick up and compete with – just to hammer the point home, both of us played our first games at a 16-person tournament, and managed to put up a respectable showing (1 win! 2 losses…). The Kings of War rules have been polished to a high sheen such that they can be learned on the fly like no other wargame.

2. Player friendly – one rulebook, no codexes/battletomes

The rest of the main rulebook’s pages are devoted to the lore of Pannithor (the world in which Kings of War is set), with histories and background for each faction, and finally the rules for those factions. Unlike Games Workshop games, everything you need to start playing (and to continue playing indefinitely) is contained in the one book. One book to rule them all.

There have also been two supplements so far; Uncharted Empires, which adds 9 new factions to the game, and Halpi’s Rift, a supplement focused on expanding the magic system, introducing fighting on other planes, and adding additional named characters to almost every faction. Halpi’s Rift also contains the 2021 balance updates, though the supplement part of it is generally not used in competitive/tournament play. 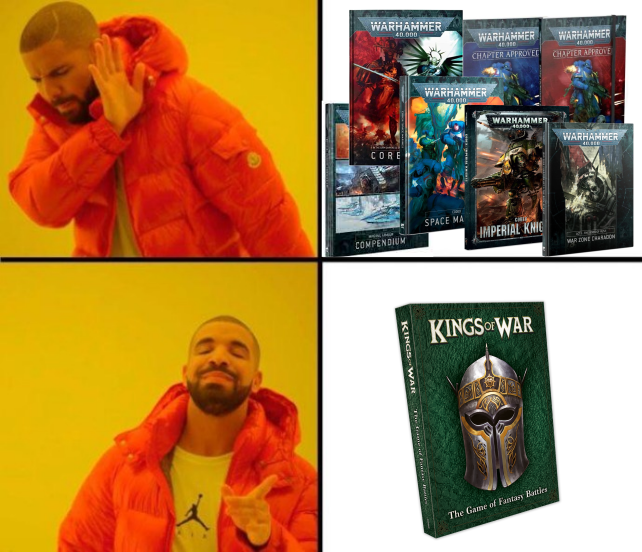 The library of books required for Warhammer 40,000 versus the singular tome of wisdom that is the Kings of War rulebook (we still love you 40K).

The general plan from Mantic seems to be one game supplement and one balance update a year, though COVID-19 disrupted last year’s roadmap and saw them both rolled into one. Usually there would be more games, and more feedback about the balance of the game, resulting in balance tweaks and the adding of supplement rules into the competitive scene.

Were you a Warhammer Fantasy player that was used to having half your army blown off the table by a certain atypically coloured sun? How about that Banner of the World Dragon? What about… well, we could go on here but suffice to say that in contrast, KoW is an extremely well balanced game. With the majority of the game’s armies rolled into one book and therefore releasing at the same time, there is no power creep across factions to worry about. All play styles have a good chance at winning, given the same player skill; even the best wizards in the game can’t destroy a large block of infantry by themselves.

The game’s annual updates help ensure this remains the case by buffing the more forlorn units and factions and toning down the power of those that are shown to be too powerful. At the time of writing, undead are the “easy mode” army, with great choices across the board, but we suspect that a few of their top-tier choices will be brought down a little in the next update. If you are interested in playing competitively, you’re in luck: Pre-COVID there was a thriving competitive scene across the world, particularly in the US, Europe, and Australia. And with a timely vaccine rollout, hopefully this scene will kick back off again.

Our favourite reason to play Kings of War is that you can use whatever models you like, provided those models make for a reasonable approximation of what you are trying to represent.

Got old Warhammer Fantasy models? Bring them in.

Just got a 3D printer? Print yourself an army.

Want to support a smaller miniatures company like Mantic Games? Buy from them.

Want to run with a thematic army idea you’ve been doing for a while that doesn’t have proper rules support elsewhere? Go for it.

Or mix it all together, and do it all.

To make this work the game is more abstracted than Warhammer Fantasy Battles or Warhammer 40,000. For example: All bases for models are standardised – a regiment of infantry has a base size of 100 x 80 mm, while a troop of cavalry is 125 x 50 mm. All units have a height baked into the unit profile, and most other measures are based on the front arcs or the central point of the unit.

Additionally, there is no removal for individual models. A unit stays whole right up until it is routed or destroyed, with a tally of wounds to track – usually on a 20-sided die. This allows for some great hobby projects, where players are free to add scenic bases to make mini dioramas for individual units (termed ‘multibasing’). But if you want to keep your models on their individual bases there are both square and round base-accommodating movement trays so you can play multiple game systems with the one army.

The final point, and perhaps the biggest draw for many a busy wargamer, is that Kings of War is a fast game to play. A standard 2000pt game usually takes one and half hours. In fact, at tournaments this is the norm. This is the thanks to a combination of the streamlined rules as well as the common practice of multibasing units. While you get to keep the spectacle of large armies clashing, it is much easier to get through a movement phase when you only have seven bases to move around, rather than 50-100. Multibasing also means there’s no fiddling around removing or packing/unpacking individual models, saving you time and making armies easier to transport. So whether you want to just have a quick game on weekday night after the kids have gone to bed or have a full Sunday marathon of 4 games, both are equally possible!

What do I need to play Kings of War?

Thanks to our brilliant descriptions above, you are now convinced that you need to at least give this brilliant game a try. What do you need to get started?

Next Time: The Factions

We hope that this introductory article has piqued your interest about playing Kings of War. Whether you’re a lover of fantasy combat or just after a balanced ruleset, this game will have something for you. In order to help you choose your army, our next article will introduce the factions available in Kings of War. Come join us on Kings of War Fanatics on Facebook for hobby inspiration, lively rules discussion and the standard rumour mongering. And if you have any questions or feedback, drop us a note in the comments below or email us at contact@goonhammer.com.