With Broken Realms: Teclis on the horizon, Games Workshop has promised new rules for a handful of armies related to Order and Death (and Nurgle too!). Now is a great time to get started on these armies, to have them assembled and painted in time for the release of the new book. This week we’re looking at how get yourself started with Nagash’s most elite faction, the Ossiarch Bonereapers.

Who are the Ossiarch Bonereapers?

Nagash, the God of the Dead and the Grand Necromancer has relied on souls and bodies of the departed to do most of his bidding. Those reinvigorated with unnatural life make dutiful servants, with no concerns of their own ambitions or desires to betray their Master, they are an endless hoard undeterred by hunger, thirst or fatigue. The traditional methods of the dead have their limited however, zombies, skeletons and Nighthaunts are still hindered by their previous life and have almost no ability to think for their themselves. Nagash needed a stronger, thinking army that could stand toe to toe with Sigmar’s chosen, the Stormcast Eternals.

Nagash, using lost magic from the Stormvaults which also imprisoned one of Nagash’s lost lieutenants Katakros began work in earnest to construct the Ossiarch Bonereapers. Similar to the Deathrattle hordes of skeletons, but more advanced, Ossiarch Bonereapers are constructs made of bone taken from fallen soldiers and in tributes taken from the villages of men. Only the best pieces are used to construct these automatons, creating an elite fighting force very dissimilar to the awkward and ramshackle Deathrattle soldiers. Each of these creations is imbued with a soul energy, the rank and file Mortek Guard filled with a fusion of much weaker souls which grants them only the bare minimum of autonomy. The more high ranking officers often consist of fewer souls and more individual thought, and the leaders of the army were a single person in a past life. These people were usually the best of the mortal generals in life, allowing them to continue to lead Nagash’s forces to victory again Order and Chaos.

On the table, Ossiarch Bonereapers are an “elite” low model count army. Each unit is individually very powerful and doesn’t require as much back up support as other armies frequently do. Regardless, your troops are supported by a wide variety of leaders who serve varying roles in your army. They are equally impressive in strength and can often serve very flexible roles.

In addition to the usual Gaming Book and General’s Handbook, all you need for now is the Battletome: Ossiarch Bonereapers 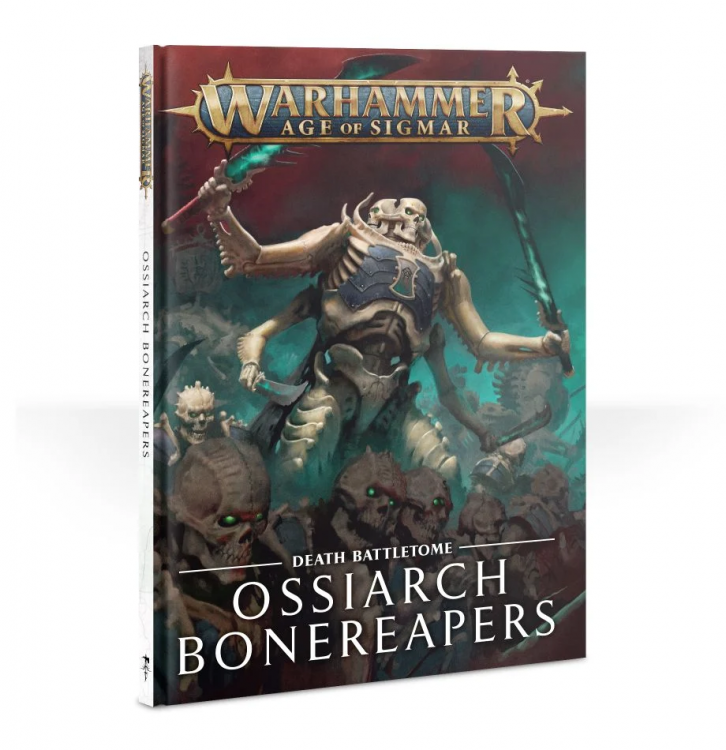 No need to worry about older editions here, as the version of this book is the only one out there. It has all your war scrolls and rules so you’ll be ready to go. Just also make sure to grab the FAQ from https://www.warhammer-community.com/faqs/. For Ossiarch Bonereapers in particular, a major change was made to Petrifix Elite, one of the armies subfactions which we will explain in greater depth when we get to list building. As a new army there isn’t really any supplemental material just yet. The next Broken Realms book, Teclis will be premiering in a couple of months and it remains to be seen if it’s worth it. If it is, we’ll update this space to let you know!.

You will also want to grab the Bone-Tithe Nexus. As a terrain piece it costs nothing, and is easily one of the best Terrain pieces in the game. There are 4 heads, each with unique effects that affect enemies from 18 or 36″ away, depending on the head. It has a variety of nasty effects and since it doesn’t cost any points you’ll want it in every list you run any way.

Sadly, Ossiarch Bonereapers don’t have a Start Collecting to help you get a bunch of models together at once. When the army first launch there was a box, Feast of Bones which also contained Ogor Mawtribes. If you had a friend to split with it wasn’t a bad deal and for a time it was the only way to get your hands on Vokmortian. The box is no longer in print though and the unit selection does leave a bit to be desired as it only has 10 Mortek Guard(as opposed to the standard box containing 20), Vokmortian (who isn’t very good compared to your other heroes, and you can buy him seperately now) and finished off with 3 Necropolis Stalkers/Immortis Guard and 3 Morghast Archai/Harbingers, neither of which are much good even with the fairly recent point drop they received. If you can get one of the box cheap, think about it but it’s not worth looking all that hard for. One boon to the army’s currently limited unit selection, and the low model count of the army makes it mercifully easy to buy separate unit boxes to get going with.

Like any army, you want to get started with your battleline, you have 2 options here, both extremely good.

So which should you go for? Well honestly it’s up in the air. Some people prefer all Mortek or all Kavalos but a healthy mix is probably the smartest place to work from here. One box of Mortek guard gives you 20, which is more than suitable for lower point games so I’d reccomend 1 box of Mortek and 2 boxes of Kavalos, but feel free to mix up the exact formula to suit your play style.

Next we want to choose a leader. For just starting out there are 3 I recommend.

Ultimately I would include the Liege-Kavalos and pick one of the Mortisan Boneshaper or Soulmason. Or both if you want, but if you’re going with the bare minimum to get started I would pick one and come back for the other later.

Once upon a time, Petrifix Elite was your go to selection, and there was very little contest. The launch version of Petrifix Elite, and the one still in the book lists its Allegiance Ability as +1 to all save rolls. If you’re coming in late please note this is out of date and to check the FAQ. It was as absurdly strong as it sounds, and has now been replaced with the much more benign rerolling all 1s to save. Which is absolutely terrible for Ossiarch Bonereapers because Mortek can reroll all saves for the cost of 1 Relentless Discipline point. The current favorite leans toward the Mortis Praetorians, but this has more to do with the fact that many of the named characters (Including Arch-Kavalos Zandtos, Vokmortian and Katakros himself) are already in the legion, giving excellent synergy. The legion itself is fine, but you can make good arguments for many of the different subfactions. For the sake of ease, using the advice above let’s look at a potential starting list.

If you got the Soulmason instead of the Boneshaper, you can substitute that in and swap the Emerald Lifeswarm for a different endless spell. You can’t use command points so there’s no use in buying one.

We’ll stick with Praetorians because the artefact and Command Ability of the legion synergize very well with it. The artefact grants a -3 rend on a melee weapon, and the command trait lets you reroll hit rolls for units that charged this turn, which works perfectly with our 2 squads of Deathriders. You’ll notice off the bat how few units you have to work with, even at 1k, 5 units is not a lot. While I assure you they can hold their own, this is why it’s important to bring healing spells through the boneshaper and Emerald Lifeswarm, to keep your few precious models going. Your basic strategy is treating your Mortek as a shield guard for holding objectives, while your boneshaper keeps them alive. The Liege Kavalos and his Deathriders can move fast to hit the enemy hard and pick off stray units going for an objective. With proper coordination your opponent will have a hard time killing too many units while you secure the objective.

Once you have a good handle on the army, there’s a few places you can expand. As usual, getting more battleline is an excellent place to start. Expanding to larger units of Mortek guard (or more, smaller squads) is a great idea. You also have some really strong characters and heavy hitter units to look into, that aren’t good picks for a 1k list but in a 2k list are very competitive.

The Ossiarch Bonereapers have had a bit of a journey. From the prospective meta darlings, they quickly saw themselves out classed by Tzeentch and Kharadron Overlords with their ranged attacks and high rend, two major weaknesses for the Ossiarchs. After the nerf of Petrifix Elite they’re in a pretty decent place, with their brand new models they’re a great army to start playing with and the fact you have fewer units to track makes it a lot easier for a new player to get to grips with the game. Will you lead Nagash to victory against Sigmar and the gods of Chaos? Are you already a servant of the Great Necromancer? Tell us your experiences playing with Ossiarch Bonereapers on social media or at contact@goonhammer.com.