Getting Started: Sisters of Battle/Adepta Sororitas 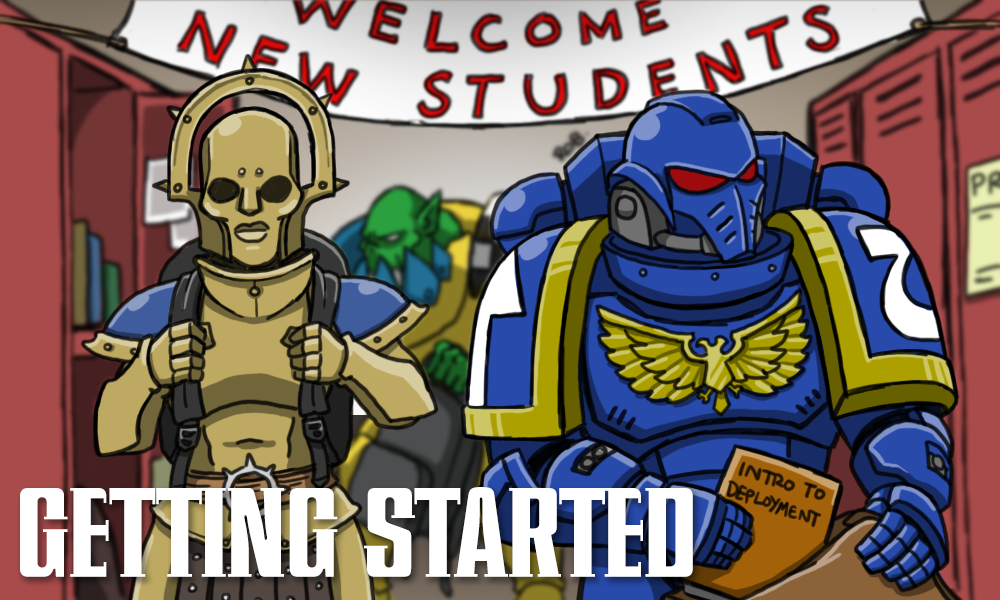 Are you a little too into gothic cathedrals? Do you like your heretics well done? Would you like to play around with one of the most characterful miniature ranges games workshop produces? Do you want a codex with both the raw power to compete at the top today and the depth to make almost any sort of build work? If the answer to any of these is yes, the Adepta Sororitas may be for you.

Who are the Adepta Sororitas?

“Some place their trust in warships, and some in weapons of destruction. But we remember the divine Emperor. They are brought down and fallen; but we are risen and victorious.”

Short answer, nuns. In the fiction of Warhammer 40,000 the Orders of the Adepta Sororitas serve a number of functions. The Orders Hospitaller run medical missions throughout the Imperium, tending to citizen and soldier alike. The Orders Famulous are esentially the Bene Gesserit, arranging marriages for the Imperium’s benefit and telling imperial nobles to stop marrying their cousins. The Orders Dialogus comprise some of the galaxy’s greatest scholars of both the Emperor’s word and xenolinguistics.

On the tabletop, though, the real stars are the Orders Militant, the martial arm of the Imperial Church. They are the Imperium’s most zealous defenders, purging the galaxy one heretic at a time with the holy trinity of Bolter, Flamer and Melta, often joined by their close friend Chainsword.

The Sisters of Battle originate from the Age of Apostasy, a crisis only eclipsed in scale by the Horus Heresy itself. In the 36th millennium, a man named Goge Vandire became High Lord of the Administratum, quickly working to consolidate power. Soon, the Imperial Church, rife with corruption, came under his sway, leaving him with unassailable control of the Imperium. Absolute power corrupts absolutely, and if Vandire was not already an insane megalomaniac, he soon became one. Thus began the Reign of Blood, which for some reason seemed to upset people.

During his reign, Vandire learned of a sect operating outside of his control on a backwards planet. These Daughters of the Emperor trained both body and soul to prove their devotion to the Emperor. While the fate of many such sects was extermination, Vandire instead visited their world to proclaim himself chosen by the Emperor. While initially skeptical, a demonstration of the ‘holy’ protection of his power field convinced the daughters to bend their knee and became his bodyguard and the most brutal tool of his tyrannical rule.

But the Imperium did not remain in his grasp forever. Many strained against his rule, but the end began with the humble preacher Sebastian Thor, whose words against his tyranny soon began to gather followers. When a fleet set out to crush them, a great warp storm appeared in their path and swallowed it whole, providing incontrovertible evidence the Emperor favored the rebel’s cause. To the present day the Storm of the Emperor’s Wrath rages as a monument to His fury. Astartes chapters, many of whom had retreated to their duties, joined Thor’s cause. With time, Holy Terra itself was under siege.

The Adeptus Custodes, bodyguards of the Emperor, broke their millennia long isolation to plead with the Daughters’ leaders to end the chaos, but the daughter’s faith was unshakable. With no other option remaining to them, they led Alicia Dominica and her lieutenants to stand before the Golden Throne itself. No record exists of what transpired there, but when they emerged, they declared Vandire traitor and arch-heretic. Upon Vandire’s final words. “I don’t have time to die… I’m too busy!” Alicia Dominica slew him where he stood, her sword slicing clean through the power field which had fooled her sisterhood so long ago.

Sebastian Thor was proclaimed the new Ecclesiarch, and quickly proclaimed that the church would no longer maintain its standing army. Almost as quickly he realized that a small standing army was extremely convenient, and proclaimed that the Daughters of the Emperor, now renamed the Sisters of Battle, didn’t count. Like the space marine legions the Adepta Sororitas were split into six orders to prevent another such consolidation of power, each led by one of Alicia Dominica’s six lieutenants.

In the modern era, the Sororitas are second only to the Space Marines in the quality of their equipment, and second to none in their unwavering faith. With such a small force, the vast wealth of the Imperial Church pays the exorbitant cost of equipping every sister with power armor and the training to use it. If the Astartes form the spearhead of a crusade, the Adepta Sororitas are often its heart, bolstering the masses of the Astra Militarum with unshakable faith and bloody minded determination. 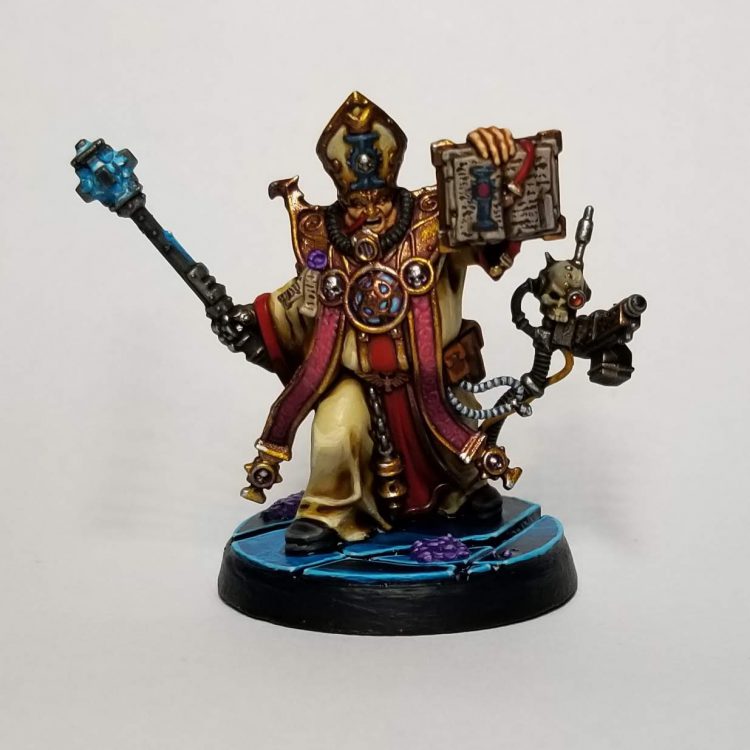 You only really need the Adepta Sororitas Codex for most sisters armies, though the Order of our Martyred Lady has some fun goodies in the Book of Fire.

While nobody really cares if your models aren’t the right color for the faction you’re playing (as long as it’s clear which are which if you decide to mix them), it can help you decide what to buy to have an idea what subfaction you’d like to play as.

Now that we’ve looked at what the army does, let’s look some kits to give you a good base to build your force from. As their force is made up of newer kits and you need a decent number of models, Adepta Sororitas are on the more expensive side. There also haven’t been many deals and finding second hand sisters is far rarer than for armies like marines..

This box has the contents of the Sisters of Battle launch box, plus a rhino. While it’s a decent value it does have units in some awkward sizes you may not end up using to their fullest, and everything but the rhino is monopose with set weapon options.

All in all, the Rhino, Battle Sisters, and Canoness cost enough that the box mostly pays for itself just through them. If you plan to use the Seraphim or Penitent Engine it starts to be a decent discount, and the Repentia included might save you a few bucks down the road.

You’re going to want to get familiar with this box as you’ll be seeing it a lot. It’s named Battle Sisters but it contains 4 of each special weapon (Though only 4 sets of arms to hold them for a max of 4 total from the box), so it also lets you build Dominion or Celestian Squads. The models are excellent but take a bit of time to put together, so don’t expect to assemble an entire army in a day. While the models all ostensibly go together in one proscribed way, with a tiny bit of gap filling you can get a lot out of kitbashing this set. In combination with some of the other sets, it’s quite easy to build a Canoness or Palatine out of the included options. The only thing it’s missing entirely is a multi-melta, for which you’ll need to go to the Retributor Squad kit.

This dual kit builds both airborne units of Sisters. Zephyrim are an excellent unit, but even if you plan to use neither unit, this kit can be a goldmine for conversions. You get a bevy of expressive pistol and sword arms of every variety, along with little bits, purity seals, and a great banner.

Repentia are good. The modern Repentia are really amazing models and a nice source of bits if you need eviscerators or hands in a variety of poses holding sword hilts.

A 10 woman brick of Sacrestants is one of the better options Sisters have for a durable tarpit, and they are no slouches in melee. I generally find them most useful tagging along as a bodyguard for characters in the main battle line to either function as a counter-melee threat, or to charge into the breach the turn after the repentia do to exploit any gaps they have opened.

While it’s not at the bleeding edge of optimal, this list makes the most of the starter box (Assuming you either buy a Zephyrim Kit, source hand flamers elsewhere, or proxy them) and shows off a lot of different things the Sisters can do. The combination of Martyr’s Strength and the Blade of Sacrifice lets your Canoness sacrifice 2 wounds to make a spicy 6 attacks at Strength 6 and 2+ to hit, with each successful wound dealing 2 mortal wounds each. The Palatine spends a CP to Open the Reliquaries and carry the Litanies of Faith, which allows you to reroll one miracle die per battle round, helping you make the most of the Miracle Dice you’ll be generating, though you may find you generate enough you don’t need it.

Definitely remember the Blessed Bolts stratagem for the Dominions, it lets them do a whole lot of damage hopping out of a rhino or strategic reserve.

To build this list you will need the Combat Patrol box, a Palatine, one Battle Sister Squad, 2 boxes of Celestian Sacrestants, and one Repentia Squad.

If you’re willing to spend a little bit more to get a more focused list, this may be the list for you. This collection of Bloody Rose Sisters puts up quite the explosive fight. While Righteous Rage may be the more popular choice for a Slam Canoness, I find that the Bloody Rose warlord trait, Blazing Ire, which gives an extra attack and allows you to advance and charge, gets my warlord stuck in more easily alongside the rest of my army, and with the Mantle of Ophelia reducing the damage of all attacks targeting her to 1, she becomes a quite vexing thorn in my opponent’s side. Either they leave her there to continue murdering things, or devote significant resources to killing her, allowing other things to run rampant. (At which point she will likely spend 2 CP and a few miracle dice to resurrect herself through the Divine Intervention Stratagem.)

The Dogmata lets you either hand out extra attacks or +1 to invulnerable saves to one of the Repentia Squads, which can help them kill a key target or soak up more of the enemy’s efforts on the turn they charge in. Swapping her out for more bodies could be a solid choice as well.

There are a lot of different directions you can build your sisters in. If you’re mostly doing matched play, Morvenn Vahl is a great model and very good on the table for any sisters faction. Bloody Rose love to have two decent sized Repentia squads, while Argent Shroud specialize in Retributor Squads. Another unit of Battle Sisters also wouldn’t go amiss. There are few outright bad sisters units, so go with your heart. Play some games and see what works well for you, or just what looks like it would be the coolest to paint.