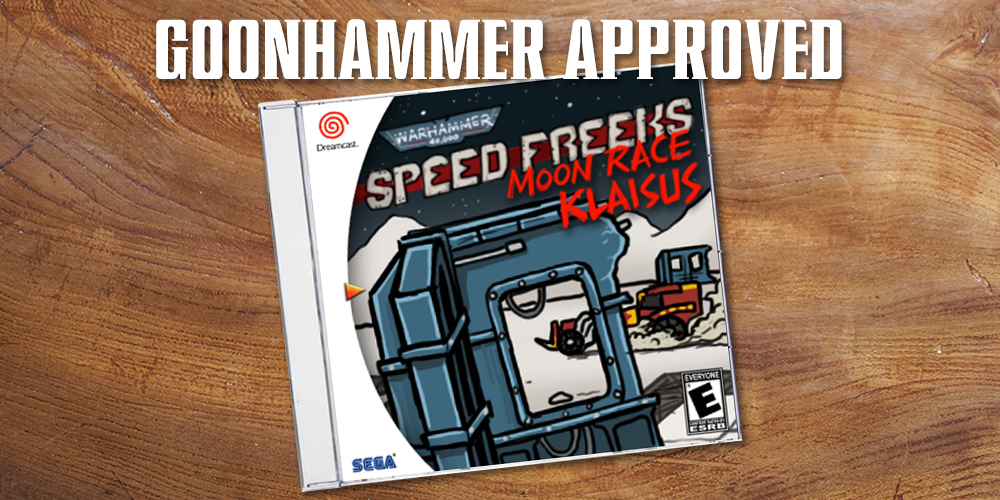 In the grim darkness of the far future, there can only be sick lunar dune buggy action!

With the death of Krooldakka and the fall of Vigilus to Imperial forces, the Speedwaaagh! was ended.  But word of the daring races there spread throughout the galaxy. The Orks soon reappeared on the abandoned ice moon of Klaisus in the shattered Cadian system. They have claimed it for their own, and welcome any who would challenge them. Now only the bravest – and the fastest – in the galaxy dare go there to join in MOON RACE KLAISUS!

SPEED FREEKS, the glorious board game of Ork racing and smashing, was unfortunately never picked up as part of the Specialist Games line. So its dozens of fans never got to experience the thrill of victory and the agony of defeat for factions other than Orks. But friend, Goonhammer dot com is here to bring a glorious end to that miserable waking nightmare of want and sadness!

Presented here are SPEED FREEKS datasheets for Bikes and Wagons from all of the major factions of the 40K universe.*  Including the new Primaris Invader ATV and the Lokhust Heavy Destroyer!

Also, here are three new scenarios (or “rukks”**) that take place on the REALM OF BATTLE: MOON BASE KLAISUS battlefield, a larger area than the original SPEED FREEKS board, and utilize special rules for the ice moon.

You will only need three things to play these scenarios:

So what are you waiting for? Grab some buggies (or buggy-equivalents), turn up some driving tunes, slam your 44.5” x 66” REALM OF BATTLE: MOON BASE KLAISUS board on the table, and race for the fate of the galaxy! Or a small ice moon!

*There aren’t any Ork vehicle datasheets included here – you have plenty of them already in your copy of SPEED FREEKS.

**If this is an expansion beyond just an Ork-themed game, why all the Orky words? Their moon, their rules.

***or at least the rulebook, movement tools (called “gubbins”), special dice, and cards that came with SPEED FREEKS. The wagons that came with it are not specifically needed for these scenarios, and you have the infinitely superior boards and terrain from the REALM OF BATTLE: MOON BASE KLAISUS set!.