Goonhammer Historicals: Creating a Campaign – On the Loose in Georgia Part 1

Everybody loves going on campaign. Whether it’s historical gaming, 40k, Necromunda, etc there are always campaigns going and they’re some of the best times we’ve all had doing wargaming. There are a few types of campaigns – what we’re going to be talking about today and in a series of articles is a programmed campaign. This is linear, with decision points and outcomes from battles but there is no map with choices where to go, or assign troops. 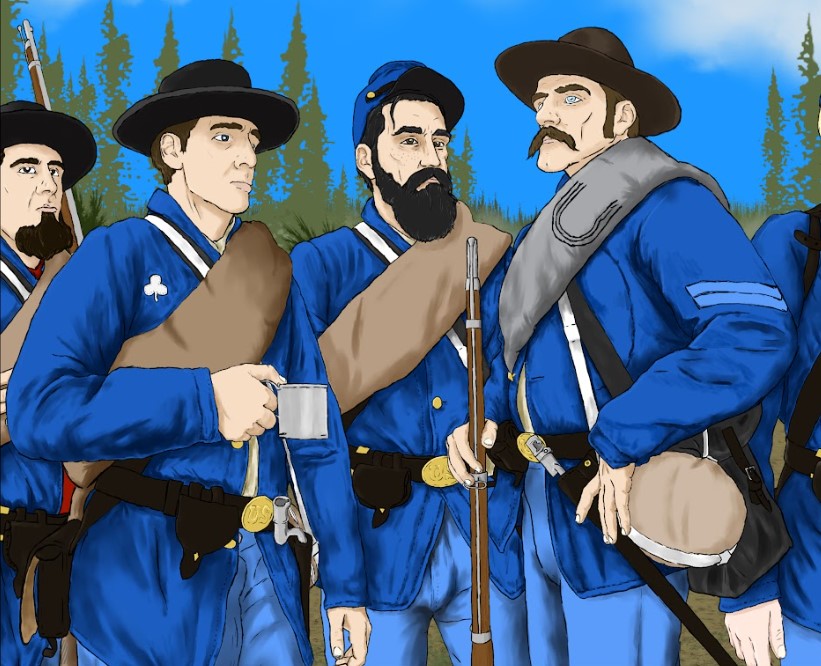 I’ve been working on this campaign on and off (mostly off unfortunately) for years. I wanted to choose a location and time during the American Civil War that was interesting and different from other campaigns I’ve seen. I also wanted to create fictional units and leaders because I didn’t want to a) make any historical mistakes b) do any dishonor to people who actually fought by making their stats or whatever be less than they should be, if that makes sense.

I have the end goal of having this published in a Lard Annual from TooFatLardies for Sharp Practice, if they’ll take it. I’ve been gaming for years and years and done blogs, YouTube channels, and podcasts, but never been actually published in a wargaming thing. I’d love it.

I chose to set the campaign (it is called Bummers On the Loose in Georgia – “Bummers” being a nickname applied to foragers during the March to the Sea) in the late war because it is not something I generally see a lot of. You see a lot of Gettysburg, Antietam, Manassas, Shiloh, etc but not late war, small, local fights. I wanted to show somewhat asymmetric skirmishes between hardened Union veterans who have fought in Atlanta versus home guard militia with very rough leadership. It provides a ton of great modeling opportunities and interesting what-if scenarios.

I wrote a small intro to the campaign to get gamers into the area and time period.

November 15, 1864. Having captured Atlanta in the heart of the Confederacy, Gen William Tecumseh Sherman vows to take the fight to the southern populace and destroy their appetite for war. Sherman delivered Special Field Orders, No 120 in early November, including:

… IV. The army will forage liberally on the country during the march. To this end, each brigade commander will organize a good and sufficient foraging party, under the command of one or more discreet officers, who will gather, near the route traveled, corn or forage of any kind, meat of any kind, vegetables, corn-meal, or whatever is needed by the command, aiming at all times to keep in the wagons at least ten day’s provisions for the command and three days’ forage. Soldiers must not enter the dwellings of the inhabitants, or commit any trespass, but during a halt or a camp they may be permitted to gather turnips, apples, and other vegetables, and to drive in stock of their camp. To regular foraging parties must be instructed the gathering of provisions and forage at any distance from the road traveled.

This campaign will see the Bummers moving through southern territory, taking as much as they can from an unwilling populace. If they encounter resistance they have been ordered to burn and destroy where necessary.

John McElroy of the 16th Illinois Calvary, Company C, described Pierce County as “one of the poorest, counties of a poor section of a very poor state” in his writings during the war. People of this area toward the end of 1864 were turning against the war effort as more Confederate losses piled up and Federal forces burned their way through Georgia. Anti-war gatherings were being held in Pierce and other counties to urge the governor of Georgia to somehow put an end to the war[1].

Roaming bands of deserters and Unionists had started raiding towns like Blackshear. They ransacked stores in the town seven times in February 1865[2] taking everything they could. Life for a regular Georgian civilian during the fall of 1864 into early 1865 was very hard.

The next thing that I had to get done was creating the leaders who would take command of both forces. Sharp Practice is very much a character-focused game where you need to build leaders up that participate a ton in the narrative – think Lieutenant Sharpe in the Sharpe movies, or even James Bond in Bond movies.

For this campaign I put the 33rd Michigan Infantry up against the Pierce County Home Guard. I live near Flint, Michigan so I chose to create this unit as a regiment that came from Genesee County where Flint is. They’re led by a Captain who is taking his company out on forages.

Here’s what I wrote in my draft for the leader, Captain Zalmon S. Falkner:

Hailing from a small farming community in Genesee County, Michigan, Zalmon Falkner has fought for General Sherman since seeing the elephant at Shiloh. Due to casualties during the Atlanta campaign, the 33rd is little more than a battalion now. They have been detached from their brigade to forage in the local area with an eye toward driving livestock back toward the main force.

Falkner takes his job very seriously – having fought and bled with his men for years. He was shot in both shoulders at Shiloh, but overcame those wounds faster than most men and with only a lingering pain during cold nights. He does not waste his men’s lives needlessly, but does understand if they do not find the food and livestock the army needs that other men will suffer.

For the Pierce County Home Guard I chose to go a different route to draw some contrast between the two leaders. Captain Bemhard B. Lamberson is the same leader level (both are level three) but where Falkner draws his command from experience and hard fighting, Lamberson draws his from desperation and a desire to help the people of Pierce County.

A recent immigrant to American from Germany, Bemhard Lamberson has been given command of the Pierce County militia at a desperate time. Locals knew he had military training and experience from the old country, so they immediately implored him to command the militia consisting mostly of farm boys and old men.

Lamberson did his best to train the men, but that training was interrupted when Atlanta fell. Now he knows his duty is to protect the people of Pierce County with his small militia. They may not have the best rifles or training, but they will defend their farms and homesteads the best they can.

I still need to write the details up for their subordinates – the lieutenants, sergeant majors, and sergeants. I’d like for each leader to have detailed background and attributes so that players can really get into it.

This is the first article in a series that I’ll be writing as I go through the process of creating this campaign. I also want to share in the future my thought processes on scenario creation, force creation, and fleshing out the leaders. Thanks for reading!