I got back from AdeptiCon 2022 last Tuesday night and wanted to share all my experiences, purchases, and photos taken! I spent most of my time in the Historicals hall at the Hyatt Regency, but much of my time was spent in the Vendor Hall and also walking around some of the other halls, so you’ll see photos from everything. I put together a bunch of scrolling galleries for you to look at as I had a ton of photos. The Vendor Hall is the same great experience we’ve all been used to. Tons of vendors this year – by my count over 100 vendors and sponsors joined us and helped out with prize support. I had a budget this year that was tight so I had actually gone through the list and starred the ones I really wanted to get stuff from – especially those where shipping would cost me more. I’ve added a gallery here that shows some of my purchases.

I really do have enough scenery at this point but couldn’t pass up an MDF Saloon, MDF Hospital, and MDF Lighthouse and Boat. I’ll be using the saloon for Wild West and ACW, the hospital, lighthouse, and boat for Walking Dead and other modern stuff.

From Mantic I picked up the new Halfling models to start a Vanguard warband and eventually a KOW army, as well as a Goblin warband for Vanguard. I grabbed a new Lagertha model from Bad Squiddo Games as well as a new Irish warband for SAGA from Badger Games. Huge Miniatures had some really sweet basing stuff and I managed to grab an entire Mordheim warband including some original Mordheim models for my Beastmen.

There were a ton of other games to look at – 40k, Infinity, Age of Sigmar, Golden Demon contests, Kill Team, Team Yankee, SAGA Age of Magic, and even Kill Team Live – the laser tag game.

I played one game of Kill Team Live with my 9yo son (you can see him in the one shot) and my 6yo daughter walked around helping us as the lasgun was too heavy for her. Golden Demon was amazing, and I loved seeing the Skink win the Slayer Sword and the Grom the Paunch model entered – that model played a huge part of my childhood!

The Space Marine statue is amazing, I love that it even has a base with rocks etc. SAGA Age of Magic is not a game I’ve played yet, but I’m looking forward to it. I have the rules etc and plenty of models, just have to figure it out.

On Thursday I played in the Bolt Action Combat Patrol tournament. It was 450 points, three games. I had a very soft list – three infantry squads (one on bicycles, one on motorbikes, one on horses), a leader, and a really garbage armored car. I definitely sorely lacked anti-tank and it showed. My first two games I scored some points but wasn’t able to actually take out any units. My third game I played against Warlord Team member Greg, a really fun opponent. He brought his Polish combat patrol including a tiny tankette, cavalry, infantry, and leader.

I managed to get the charge off on his cavalry and killed them before they could kill me. He used the tankette to take out a lot of my guys and bully my squads but I was eventually able to take the center objective. I managed to go 1-2 on the day but really just had a ton of fun playing. I’ve played hundreds of games of Bolt Action and I was glad to be back at it.

I was super happy and surprised that out of 38 players I was able to take Best Painted! There were a lot of great combat patrols on display and it really meant a lot to me. I worked very hard on these guys and painted a bunch just for this event so it feels great to have that hard work pay off.

On Saturday we ran TooFatLardies games in the front of the historicals hall. We had Sharp Practice, Chain of Command, and What a Tanker for people to play. I actually ran an Open Event, where people bring their models and play in a structured campaign day. We played two games of Sharp Practice set in the French and Indian War. We had two Lardies sign up who had never played Sharp Practice beforehand – they practiced against each other before the convention.

I lost both games I played because my opponents used canister to their advantage, but they were close games. FIW is a lot different from ACW – the ranges are so much closer and close combat is extremely deadly. We played one scenario where the French had to search houses for a lost scout and one scenario where the French then had to escort his family through the wilderness.

All in all we had a great time and I hope to make it an eight person event next year, and maybe have our one day event grow to two. In the future it’ll be known as Deep Dish Lard!

I’ve played SAGA in the past at AdeptiCon, specifically the team tournament. It’s an amazing time – the TOs are always super into it and every player I’ve played against has been very cordial and out there to have a good time. I had four points of Vikings painted up so I needed two more points for the Grand Melee singles day. I played three games and while I ended up right at the average for Massacre Points, I didn’t win a game.

The three opponents I had were all gracious and very patient. We talked rules through and I learned a lot. I ended up grabbing some Irish guys to start a warband and even won a box of Picts for being last place. I didn’t get tabled or anything – we had very close fought games – I just didn’t get the objectives done, which is important! 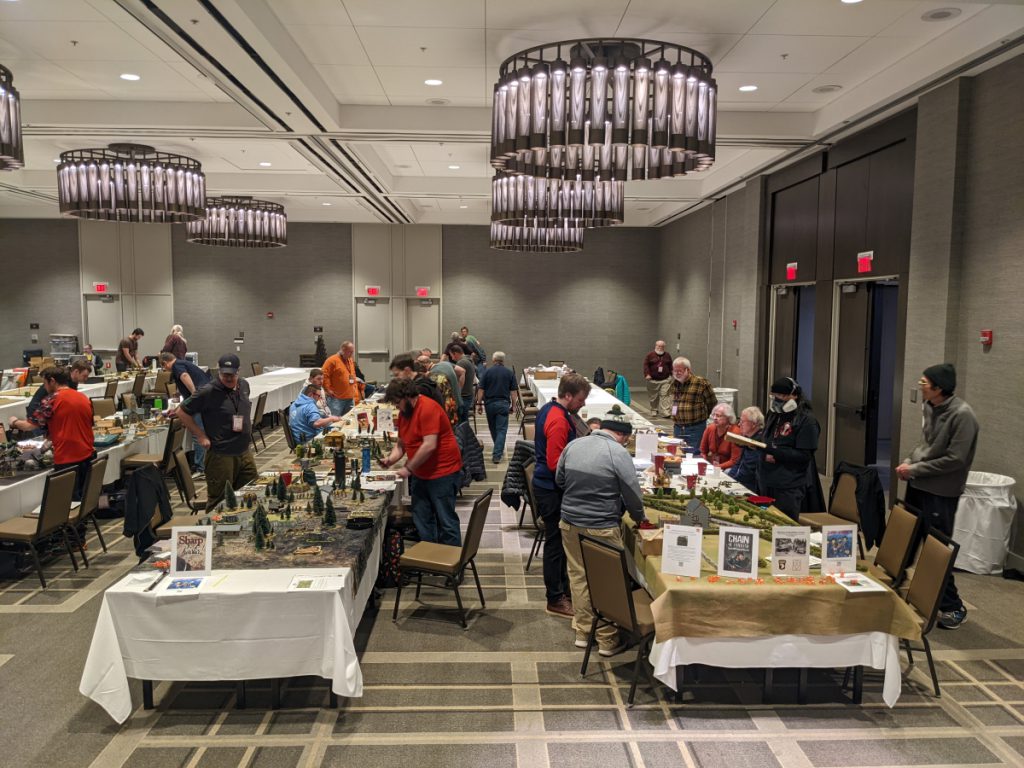 I had a different experience this last weekend than some of the other Goonhammer writers may have had. For 2022, the Historicals hall was put offsite in a different hotel. Gonna admit that at first blush I was very worried. We grow our side of the hobby by letting people see it and being offsite is not an easy way to do that. The vendors we all want to see are offsite and the hours don’t make it easy to visit while you’re playing.

From the outside, the hotel with the Historical stuff in it looked like a very old, very used up office building. It was gorgeous on the inside, with great lighting, clean halls, water easily available, and clean terlets. I didn’t actually stay in the hotel as I usually stay at the offsite hotel closest to the main hall (its a bunch cheaper, and still walkable) so I can’t comment on the actual hotel rooms.

I really hope Historicals can get back to the main site. While it’s a great room, better than the upstairs ballrooms in the main site, it just makes things more difficult. There isn’t an information table, it’s hard to get the vendor hall, you might be separated from friends you carpool with, along with the above stuff. There was a shuttle but honestly I didn’t use it and didn’t know where it was. I was carrying stuff and really didn’t want to deal with the hassle. I also have a sneaking suspicion we had drops in our games because people were just busy at the other site and maybe didn’t want to give up their parking spot.

If I ran the con, which I don’t, I might suggest condensing some of the other games to save space. Get rid of the board game library and remove some of the humungous streaming areas. I feel like the entirety of the historical area could have fit where the Kill Team laser tag and Golden Demon area was. It’s tough.

I realize that AdeptiCon might be in a situation where they have to do this for a few years due to contracts or whatever, so here are some suggestions:

I don’t have a lot of other stuff in my mind right now, and I did have a spectacular time. It just felt a little bit less than it could be. I was probably better off than others as I didn’t have any carpoolers (usually I’d have one or more friends doing stuff in the main site) and I had a bunch of time Thursday before BA Combat Patrol to browse the Vendor Hall.

Overall while that might seem like a ton of negative feedback, I had an amazing time. This was the first year my wife and kids came down from Michigan and I got to show them what AdeptiCon is. We hit a lot of the Chicago sites to see as well. I had three amazing events and renewed my interest in all three systems I played. It was definitely an event for the annals of wargaming history!