As an AdeptiCon veteran (I believe I’ve been going since 2013), I’m really happy to see our favorite Midwest con coming back strong in 2022. In the past I’ve played 40k, Bolt Action, Necromunda, SAGA, WHFB, Age of Sigmar, and a host of other games. This year I’m going back to my roots and doing Bolt Action, SAGA, and Sharp Practice at our Lard America day.

I wanted to do something cool and different so I’m going with an all mounted force. I use the German army list since most of the equipment is similar and Slovakia was a German puppet state. Here’s the list:

Note that the cavalry squad are not actually Waffen SS, they’re Slovak mounted troops. They were mostly used in patrols and security and shouldn’t really be veterans at all, but its the only way to get horse guys into my list.

You can see the armored car in the pic above or the full army pic further above. It’s a Slovak OA VZ 30 armored car, and doesn’t match exactly the Adler, but I’m going to use the Adler’s rules. It’s not actually open-topped but it was so garbage and lightly armored that it makes sense to make it open-topped. 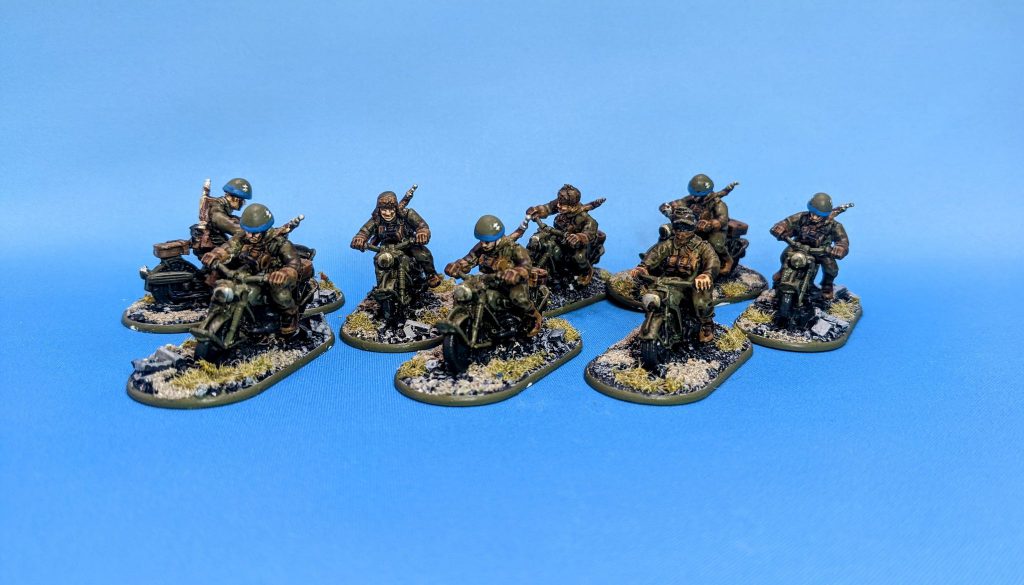 I didn’t have any motorcycle troops painted so I had to get them painted up and I was happy with the outcome. These are Warlord Games kradschutzen I believe for Africa. I’ve done some head swaps with Soviet hats and Slovak helmets. These dudes are ready for action! 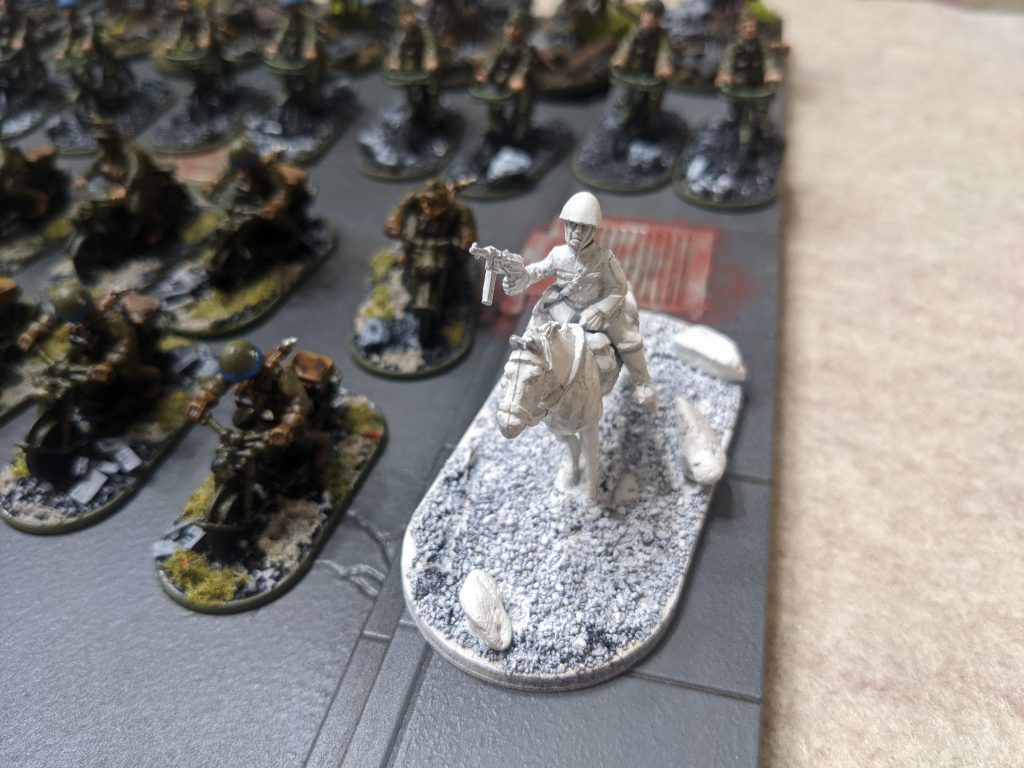 The last piece I need to finish is my Lieutenant. I do have another mounted officer I can use from the cavalry squad if I need it but I wanted to paint this guy with the helmet. The source is actually a Japanese mounted officer that WLG produced a while ago.

I’ll be playing SAGA on Sunday in the Viking age event. I’ve played in two team events in previous years but this time I’m going by myself with a 6pt warband. I had to paint up two extra points and chose to do some more hearthguard and some levy, which I actually haven’t used before. You can see in the pic above my warband with Ragnar leading, two groups of 8 warriors, and two groups of 4 hearthguard. 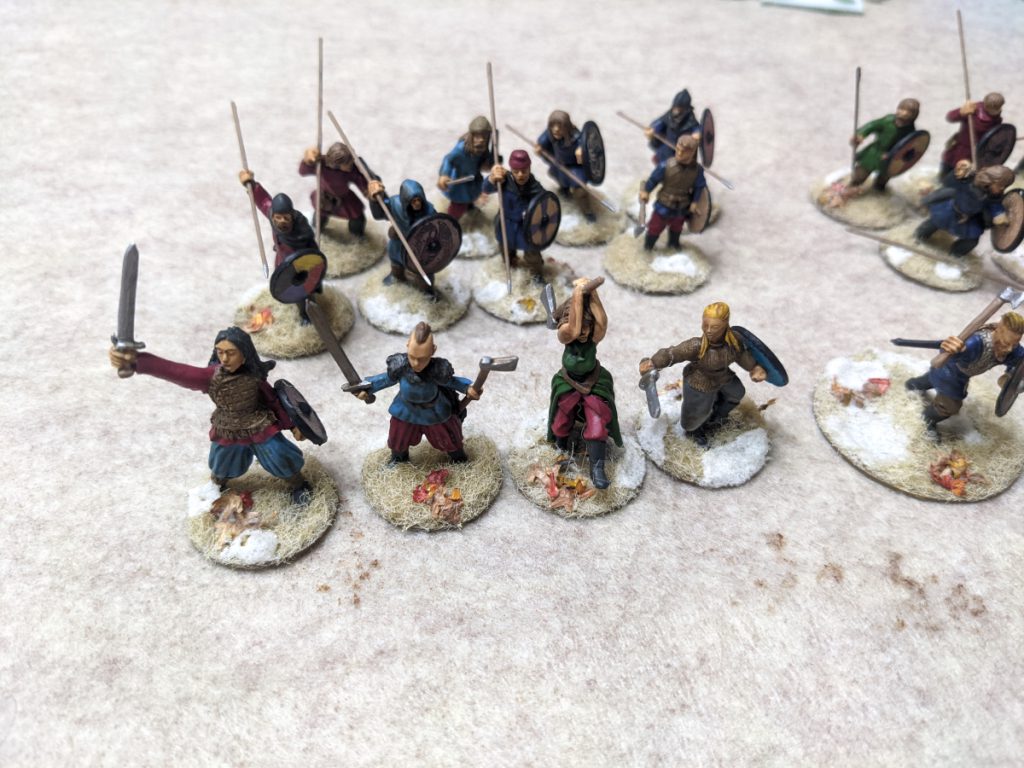 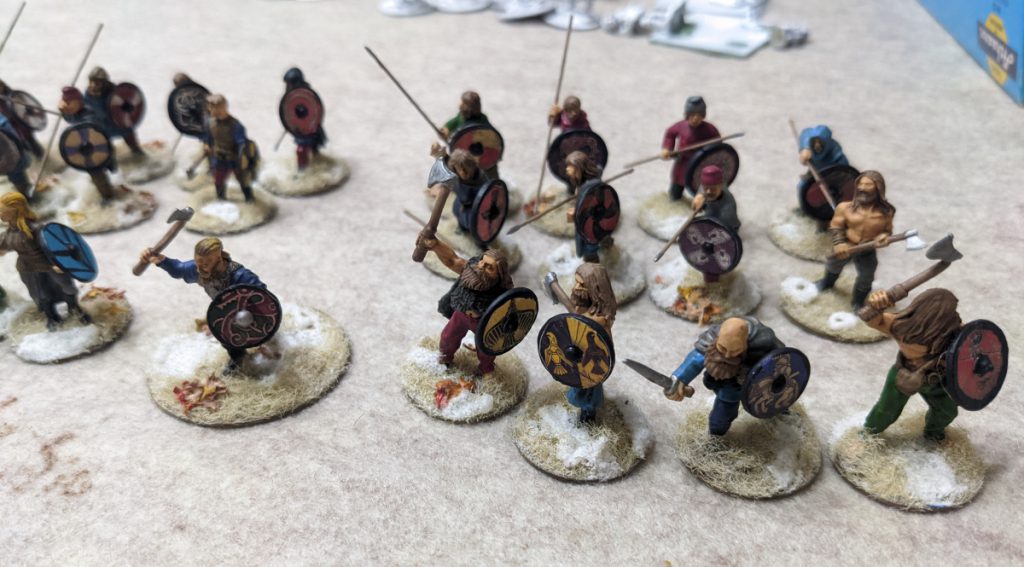 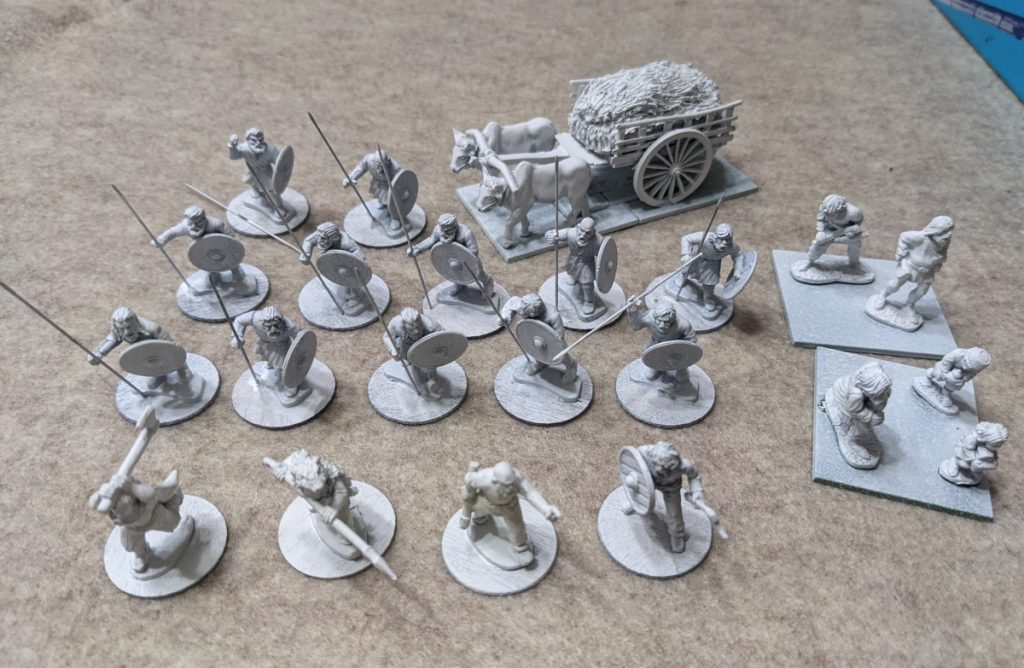 Here’s what I’ve been working on. They’re mostly finished except for the shield transfers. The levy with spears are actually plastic Gripping Beast guys. I chose to use the brass spears because that’s what I had used on my previous guys who are from Footsore. The only trouble I’ve had is with the shield transfers.

Usually I have no issue with decals but the boss on these shields won’t fit and causes the decals to bunch up. I actually had to remove the shield boss (I have other shields and the same thing happened =| ). I’ll greenstuff a boss back on after the decals are done. I also have some baggage to paint for scenarios and my four hearthguard berserkers there that you can see.

The last bit of hobby I have to do is for our Lard America Sharp Practice Open Event. We have four players bringing forces to play in the French and Indian War near Fort Ligonier. 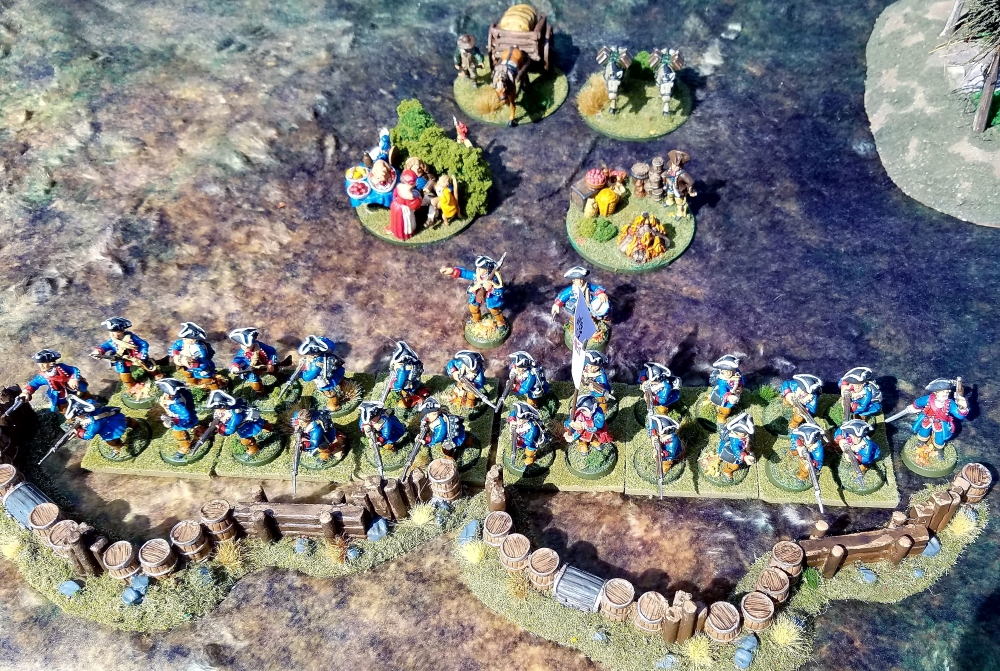 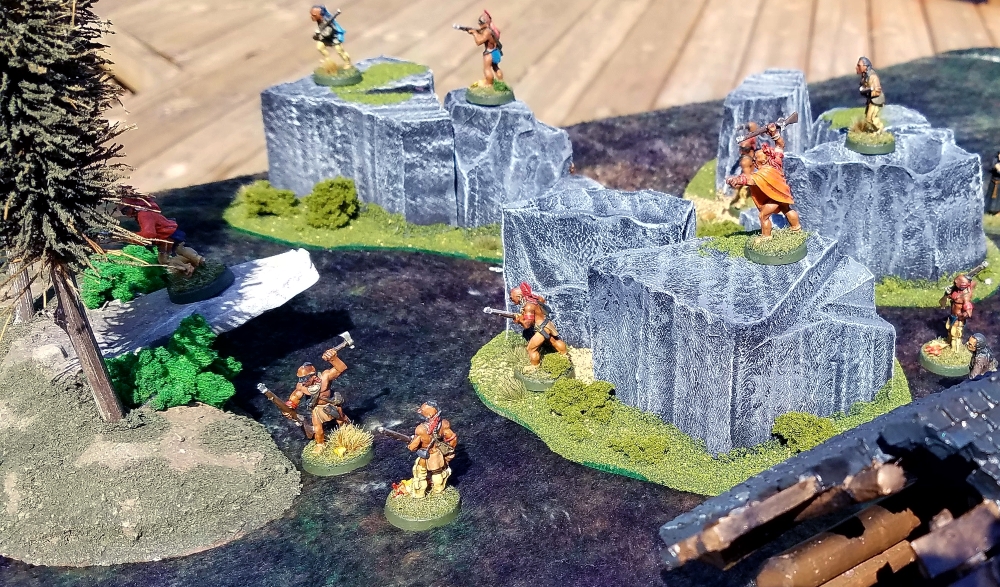 I already have a ton of Virginia Regiment guys painted along with American Indians, so I needed to paint a French force for this. I started by ordering a few books on Amazon to get some research done:

I started with these Milice Canadienne from Galloping Major, my favorite FIW line of minis. The leader on the right is actually a North Star model, another great line of minis. 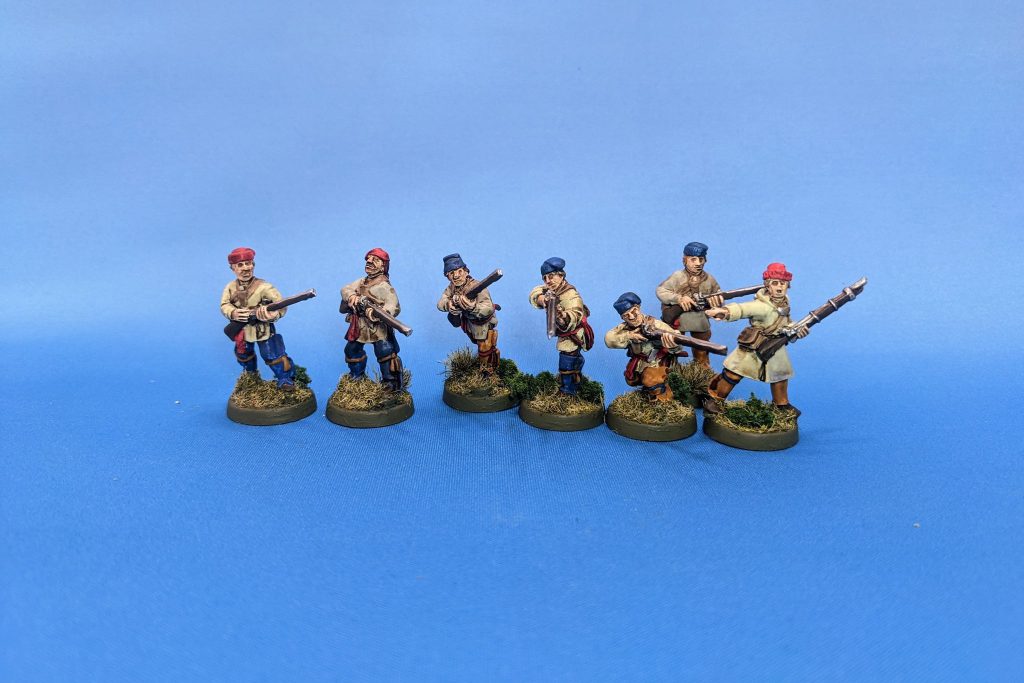 I was originally going to paint 18 Compagnie Franches de la Marine (early French marines in New France) in regular dress – white coats and tricorns – but realized after reading that those would be out of place, and they’d actually be wearing the Canadian dress with capotes, leggings, and tuques. I have had these pewter minis laying around forever – they’ll fit the bill great and look awesome lined up next to each other. I’m painting 17 of these guys (16 regulars + officer). 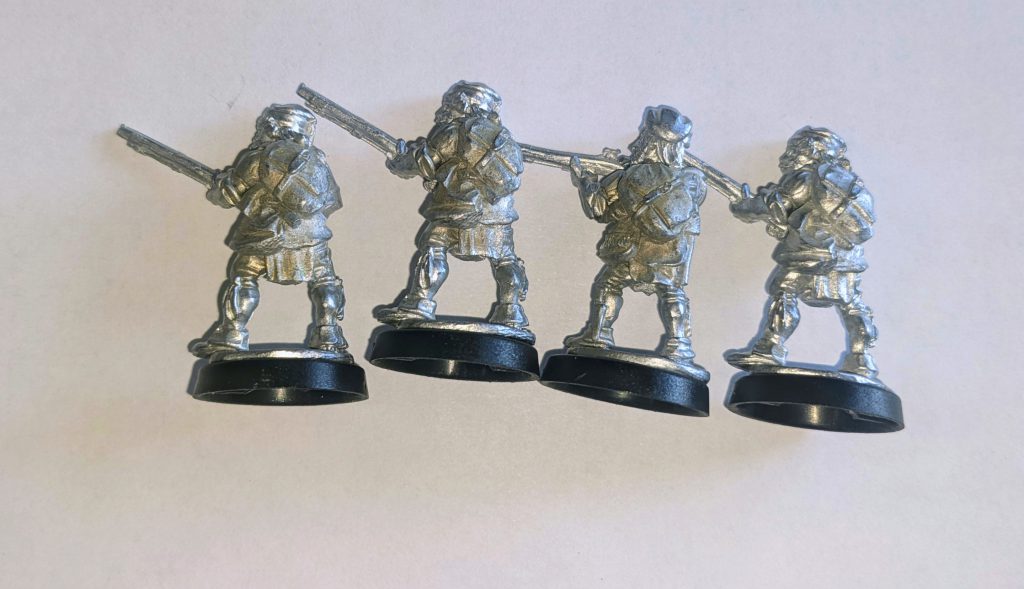 I also painted 13 American Indians (12 line troops and a leader). These are a mix of Conquest, Galloping Major, Sash and Saber, etc. 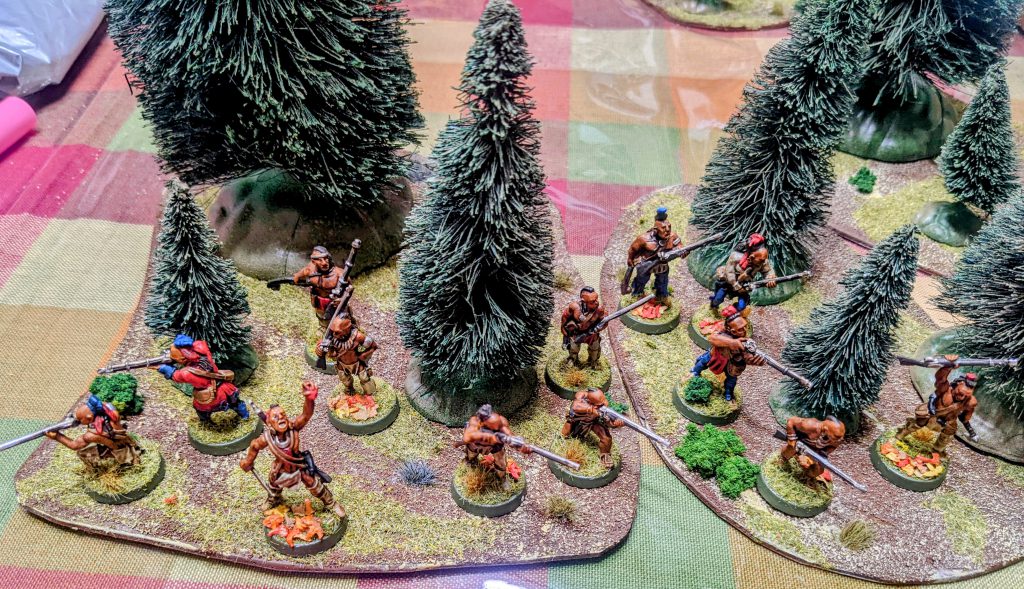 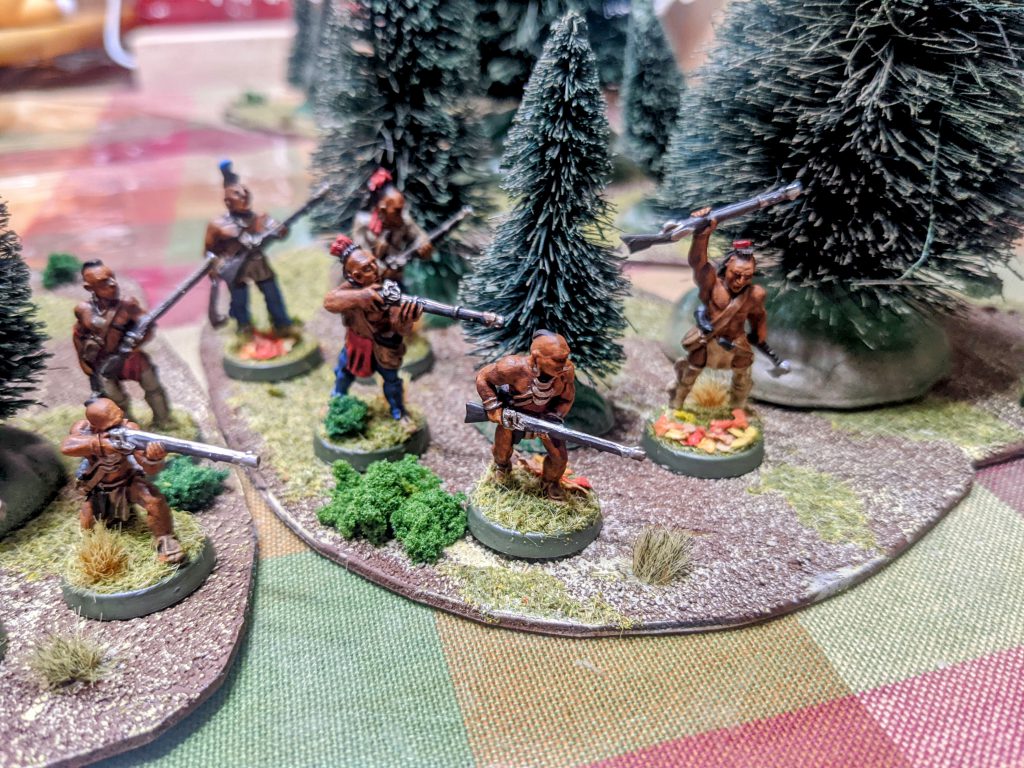 Lastly I realized I needed some more trees. I’m going to be doing terrain for two boards so I needed a ton of trees for the heavily forested American countryside. In the past the issue I’ve had is I’d make bases out of cardboard and they’d warp and look bad.

I didn’t really want to cut MDF up with a jigsaw so I found this tutorial from Goonhammer that shows how to make bases out of vinyl tiles. A little bit of flock, tufts, and foliage later and they’re perfect! The trees are just cheap Christmas trees you see in stores for the villages people put in their house. 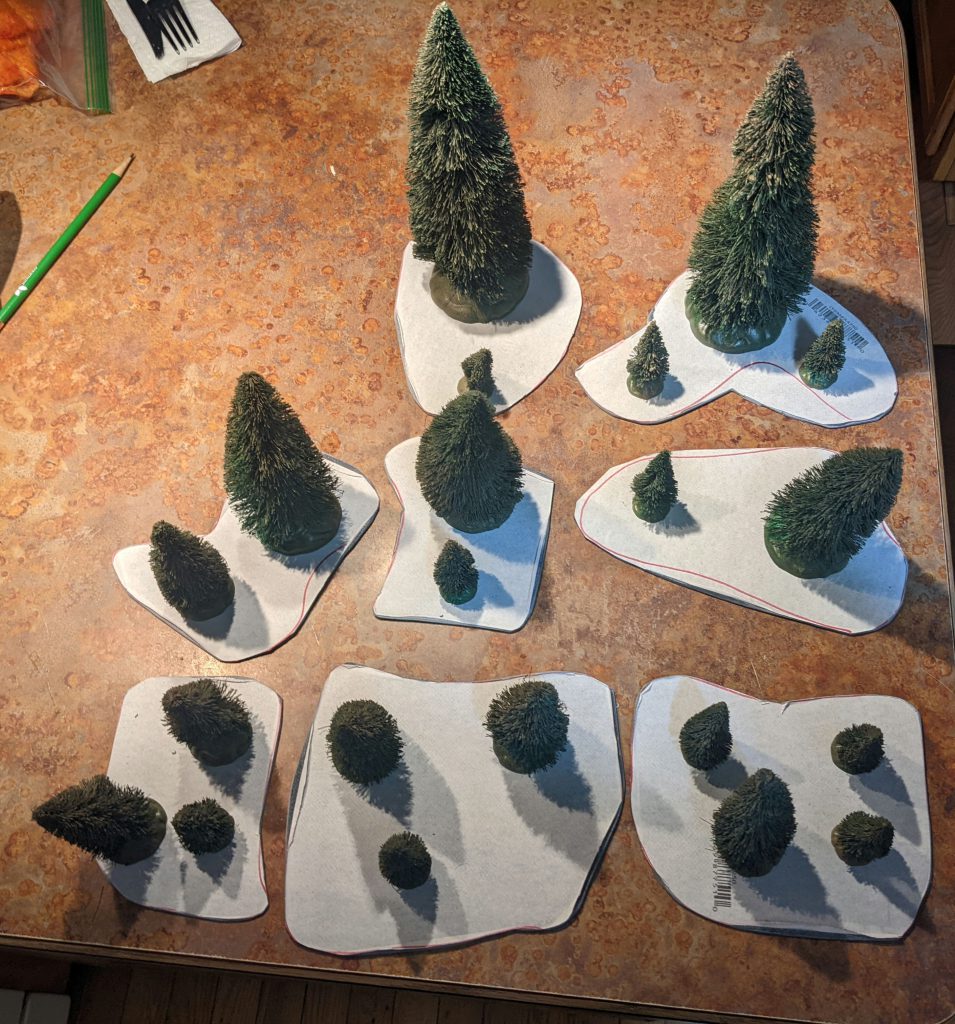 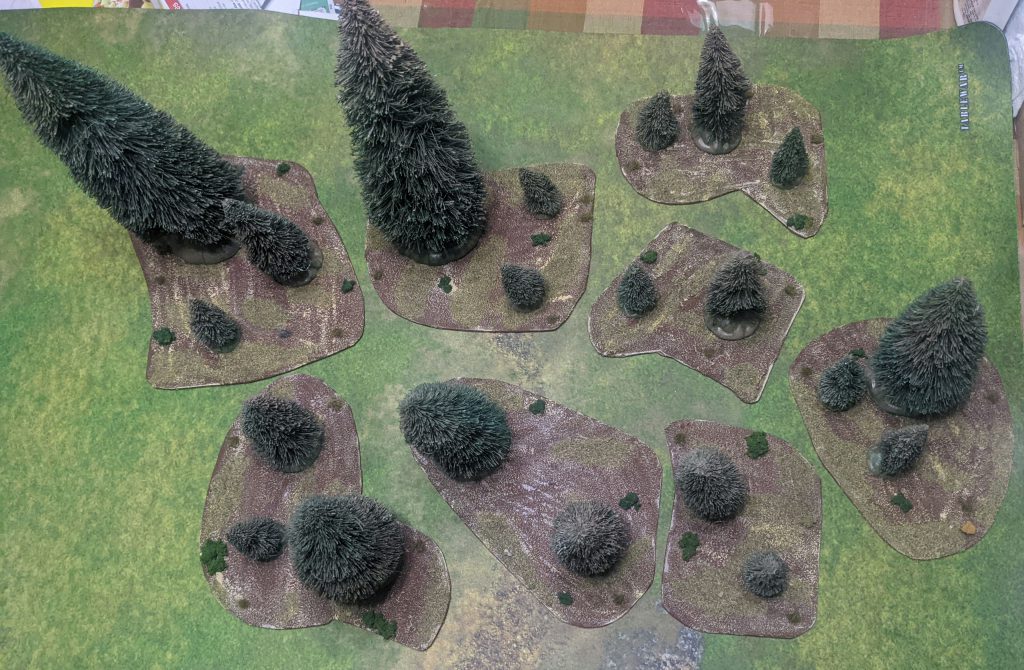 Thanks for taking time to read this. I’ll have one more update before the event to show everything I’ve finished – keep an eye out for more!