Today the Goonhammer Historicals team continues our ongoing focus on the American Civil War, this time talking about using the Sharp Practice 2 ruleset to game out the innumerable smaller raids and skirmishes that took place during the conflict. Muggins is going to lead us off by talking about possible narratives, location and terrain considerations, and some general observations about using the ruleset for this conflict. Marc “Ilor” Renouf follows this up with some thoughts about using cavalry effectively and offering a house rule for an aspect of the conflict that is not represented in Sharp Practice itself – troops going prone under fire.

When many wargamers think of Sharp Practice (read our review here), a large skirmish ruleset written by TooFatLardies, they immediately think of Richard Sharpe (with a runner up being Flashman, though I think like many Americans I’ve never grew up reading his escapades), the greatest soldier who ever lived. He mostly fought in the Napoleonic Wars and that is easily the most popular period for the game, based on the authors’ anecdotal evidence from social media. Other very popular periods are the French and Indian War and the Revolutionary War, as they included quite a bit of skirmish or guerrilla type warfare and smaller battles with fewer troops.

Gamers looking for a compelling ACW rule set that also requires many fewer models than some of the traditional corps/division level games (where you might use hundreds or thousands of minis) should look no further than Sharp Practice. The ACW took place nearish the end of the traditional black powder period but the rules work perfect for it. In this article we’ll offer some suggestions of how to get started. 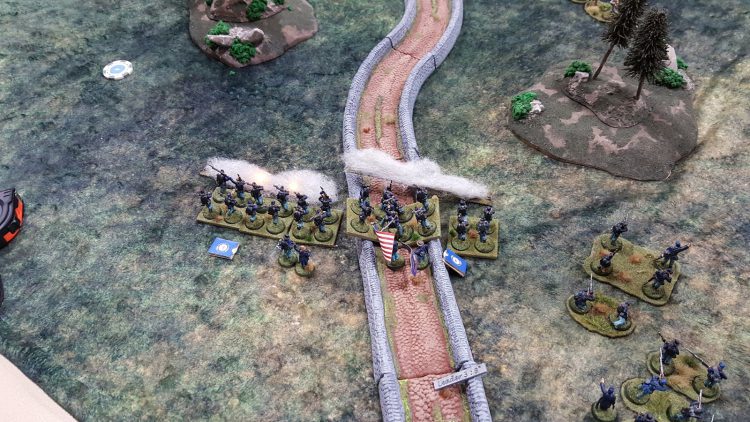 For decades, the traditional mindset of ACW wargamers was focused on refighting the huge battles – the second day at Gettysburg, the Confederate surprise attack at Shiloh, Antietam, etc. While there is definitely merit to this type of gaming, it is very hard for a beginner to get into quickly (unless you’re grabbing that new Epic Battles set from Warlord Games – more on that in a later article!). Sharp Practice allows us to fight smaller engagements with fewer troops and get started faster. This isn’t to say that is the only redeeming quality – far from it – Sharp Practice is a compelling ruleset with a ton of strategy and storytelling angles.

In the past when I’ve run participation games of ACW Sharp Practice at conventions I’ve definitely had grogs rock up and ask what the game is, why there are so few troops on the board, and how many guys each soldier represents. I explain that each guy represents one soldier for my games, and that we’re fighting a large skirmish action. Some just don’t get it, which is fine. But there are plenty of first person accounts of raids, foraging encounters, scouting missions, and we have the Sharpe movies to inspire fictional fights. Of particular note: The Combahee Ferry Raid, The Sinking of the CSS Albermarle, Grierson’s Raid, the St. Albans (Vermont) Raid, and other raid operations during the war. Many of these were cavalry raids, but often times they included infantry or dismounted cavalry. 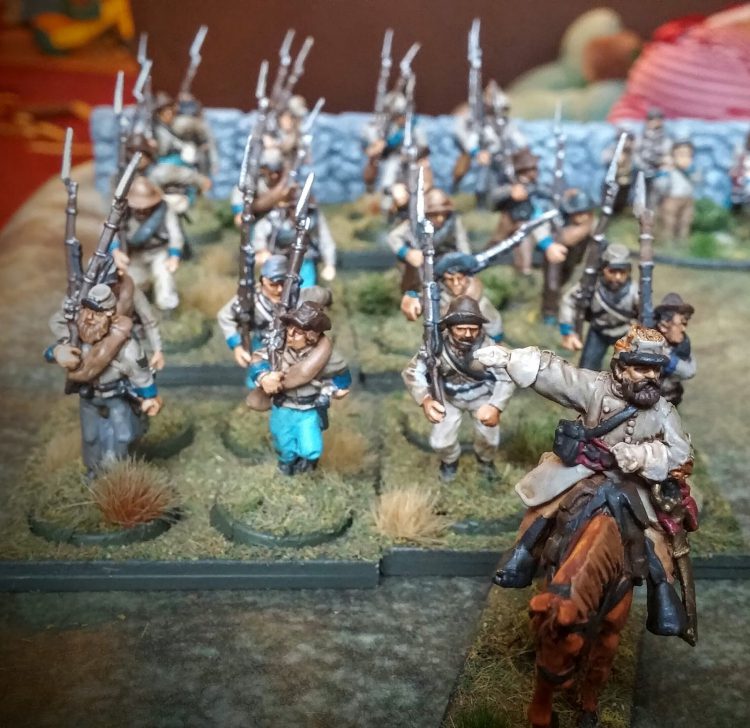 Sharp Practice is very much a story-driven game, and ACW games will definitely benefit from an intriguing story and may be easier to run using made-up elements like people, units, and even places. This frees you from having to make sure everything is entirely correct and allows for some creativity. Some plot hooks that we’ve used in the past or are considering for the future: 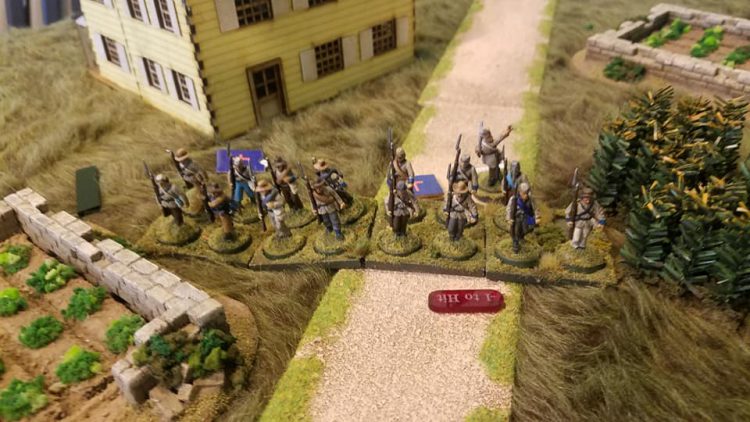 As a corollary to the narrative aspects, the location in which the fight is taking place can have a strong effect on both the aesthetics of the experience as well as the potential challenges the players might face. Some locations to consider: 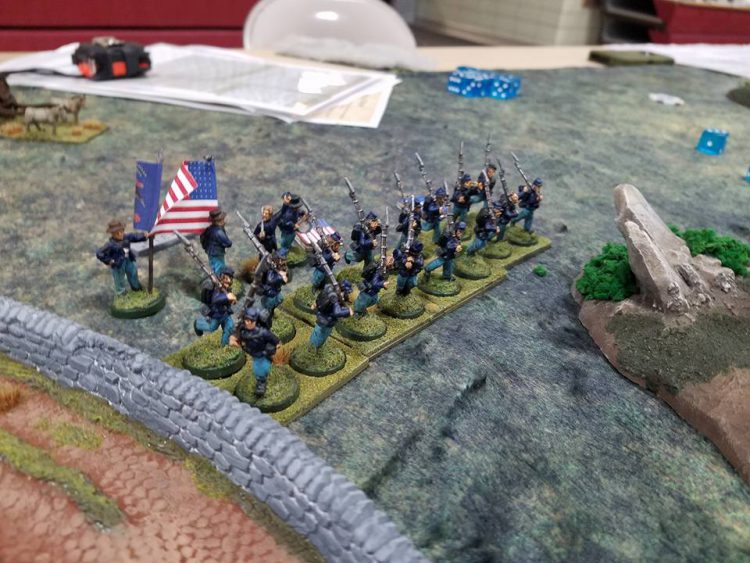 A few issues have come up as I’ve started playing SP with my ACW troops: 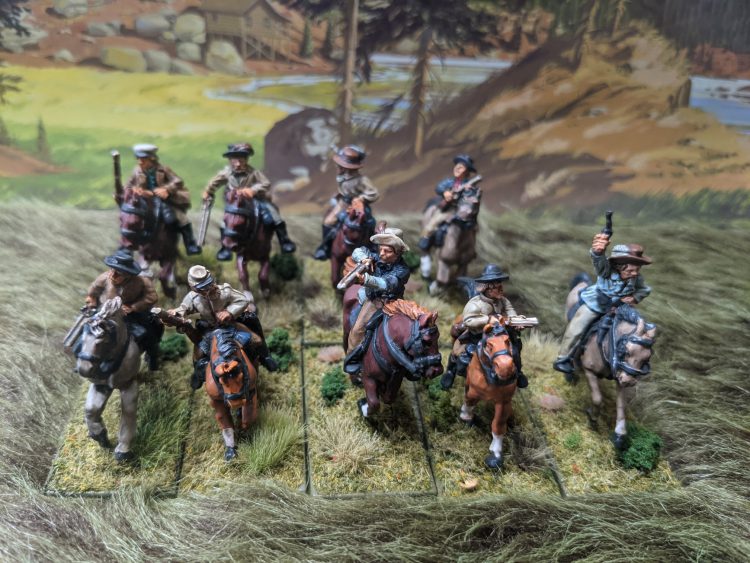 Because Sharp Practice is meant to cover the entire black powder era, it includes rules for Cuirassiers and Lancers and the kinds of “impact cavalry” more common in the earlier Napoleonic wars. But by the American Civil War and the broad adoption of the rifled musket, the engagement ranges had opened up to a distance where by the time a cavalry charge got to its destination, it was likely to have been cut to ribbons by repeated volleys of musket fire. That’s not to say that cavalry charges never happened in the ACW – the most certainly did – but they tended to be very limited affairs that took place in very small engagements, and were often the result of a surprise.

As a result, cavalry in the ACW increasingly took on very different roles on the battlefield. When employed in large numbers, most cavalry actually fought dismounted, essentially classed as “dragoons” in Sharp Practice terminology. Dragoons are handled quite well in SP2, giving players a choice – field a dismounted unit of 8 figures that cannot remount, of field a mounted unit of 8 figures that dismounts to a group of 6 (with 2 men left behind as horse-holders), but which can remount if needed. If defending a fixed position, the dismounted group of 8 is preferable, but if you find yourself on the offensive I would recommend keeping your cavalry mounted.

The key temptation to avoid when fielding mounted cavalry, however, is the siren song of the cavalry charge. Cavalry in SP2 tends to be pretty fragile, and its wider frontage often means that a single 8-man group of mounted cavalry is going to end up charging two (or more!) groups of infantry if and when you get into fisticuffs. Because of the vagaries of how combat scores are calculated in SP2, this can often result in cavalry getting massacred in a charge, and even if they manage to inflict more casualties and “win” the encounter, they are often crippled in the process. While many people point to this as a “problem” with mounted melee units in SP2, it’s actually pretty spot on for the period.

If you are planning to charge something with your cavalry, your best bet is not your opponent’s line, but rather his flanking units like skirmishers, units which are almost always single groups and which are already at a disadvantage in close combat. Because skirmishers have the opportunity to “evade” a charge, the extra movement distance afforded to cavalry means that evasion movement is less likely to be enough to avoid contact, which in turn means that any Shock inflicted will be doubled. Cavalry are really good at clearing out annoying skirmishers, which again is historically accurate. 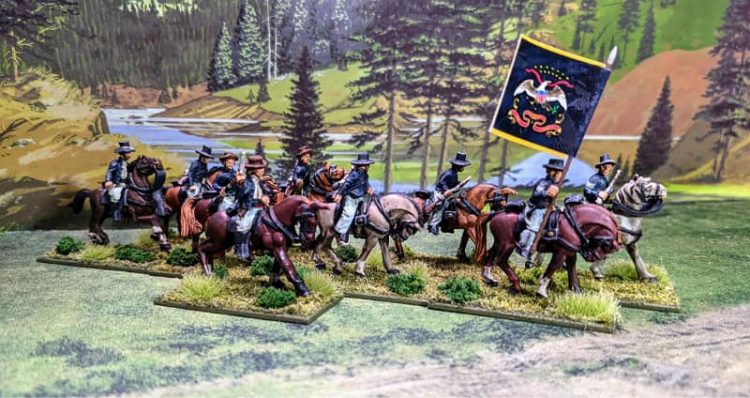 But a far better use for cavalry may simply be to get a unit into position to take flank or rear shots on enemy units. This is best accomplished by moving hard and fast along a flank to get into position before dismounting and applying volleys at your opponent from an inconvenient direction. In the early war, some cavalry (especially Confederate cavalry) has “mixed weapons” which halves their firing at range – but flank shots double Shock, so this helps offset their decreased firepower. And later in the war, when cavalry forces may be carrying repeating rifles, dismounted cavalry dishing out rapid-fire volleys into an enemy flank can be devastating.

Also, don’t forget the effects of the “Moveable Deployment Point” that scouting cavalry offer. Depending on the terrain, you may very well be able to use this capability to partially envelope your enemy when deploying your units. Just be aware that the Movable Deployment Point can only change positions when your primary force leader’s card is drawn, so there’s no guarantee that you’ll be able to move it at the most opportune times. It also requires you to hold your cavalry’s deployment, so you’ll have to weigh the benefits of having them on the field versus widening your deployment options. 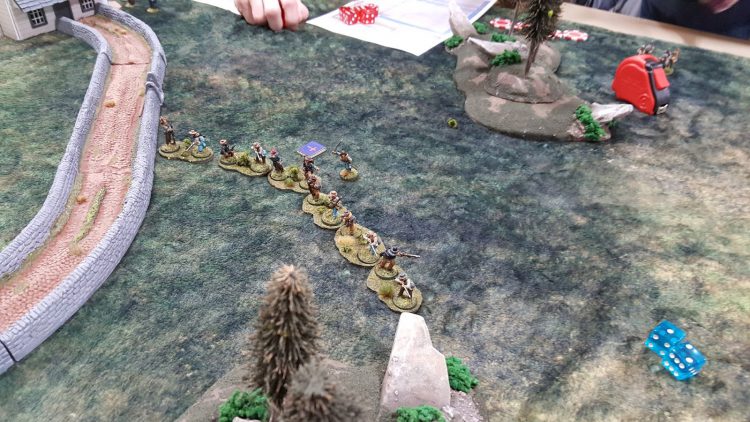 One facet of the American Civil War that is not present in prior conflicts of the black powder era is the idea of entire massed units of men going prone in combat, and sadly Sharp Practice 2 does not address this at all. Given how common it is in the period accounts, it seems like it’s something that should be a part of the game, and thus to handle it we’ve come up with an easy house rule to represent troops going prone in the face of enemy fire.

It should be understood that while going prone under fire happened, it was often not the most desirable course of action from a command and control standpoint. Once troops had gone prone, they were often hesitant to return to a standing position. This is reflected in the point about going prone breaking a Formation, as once a Formation is broken it requires each group to be activated individually. For large bodies of troops (say 3 or 4 Groups) under less competent leadership, reforming your unit into a standing position may take either multiple turns or the expenditure of Command Cards to boost the leader’s ability to coordinate the maneuver. It’s also worth pointing out that breaking a Formation incurs a test on the “Bad Things Happen” table, leading to a potential for a loss of Force Morale; if you’re going prone in the face of enemy fire, no one is under any illusions that you’re “winning,” and your Force Morale may reflect that.
Finally, reloading a muzzle-loading musket while prone is no mean feat. The extra reloading action – combined with the fact that the leader may not have the Command Initiatives to activate all of the Groups that used to comprise his now broken Formation will result in an immediate slackening of fire from a prone unit. This too mirrors the period accounts of the effectiveness (or lack thereof) of prone units. 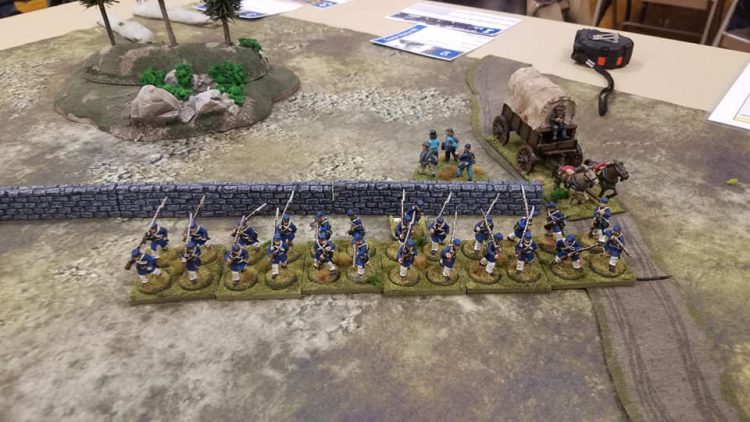 Going prone in combat during this era was often necessitated by needing to maintain a position while under fire (especially artillery fire), usually while other parts of the unit (be it company, regiment, or brigade depending on the scale of the battle) were moving into position or forming up. It might keep you from getting badly mauled in the open, but it’s no one’s idea of the perfect solution, and this house rule reflects that.
Sharp Practice by TooFatLardies is easily Muggins’ favorite way to game the ACW and we hope with some of these suggestions you too can get going with large skirmishes. We still have plenty of content lined up for our ACW coverage on Goonhammer.com – thanks for reading and please be sure to leave any comments below or email us at contact@goonhammer.com.