It is HOT HOT HOT outside, so naturally our contributors have been huddling indoors painting tiny plastic spacemen. Check out their hobby progress below!

It’s been a slow month for me, with most of the stuff painted here being largely done in July and then finished off in early August. As well as ever-more Crimson Fists, I’ve also been painting a few Blood Angels, my original chapter back in 3rd edition – 9th is the time I’m finally going to get my half-formed BA army into being a real thing that can go on the table, and I think they’re a step up in painting compared to the Crimsons. I have a bunch more stuff in the works, including finishing off two Impulsors which are literally just waiting for a highlight and some weathering, but being able to game again has slowed things down – it’s fun to be back playing after a long break!

The last two weeks have been busy for me, occupied with the painting of a single model, but now I am DONE! with Mortarion, Daemon Primarch of the Death Guard. This bad boy was a real project, and I’m glad to be done with him and able to move on to some other parts of the army that desperately need it, like adding a Biologus Putrifier and maybe a transport.

The wings took the longest (they’re also the most important part of the model, visually), and I’m very happy with how they turned out.

To commemorate the occasion I brought Morty to a 2,000-point game on Saturday against Swiftblade’s Adeptus Mechanicus and in true “first painted game” syndrome he was shot off the board on turn 1 before he could do much of anything. RIP.

After vacationing in The Old World and Le Vieux Monde over the past month or so, I’m back in the 41st millennium and working on my Indomitus bois. Instead of going for the hot new characters or ass-kicking elite units, I got a start on the humble Assault Intercessors. After working out their unique heraldry, I fell right back into the Ultramarines-painting groove.

Red, white, and black are colors already present in my scheme, so rearranging them to give the squad some unique heraldry that fit is a challenge that gets slightly more difficult with each squad and their individual heraldry. Repeating those heraldic colors on their weapons is one of my favorite touches as well, and a great way to differentiate between units on the tabletop.

I also used a healthy amount of transfers to personalize the squad (you can learn more about how here on goonh ammer dot cum) and apply some campaign and unit markings. I think I’ll carry the assault lightning bolts and campaign skulls over into more Indomitus models, or at the very least the other Assault Intercessors. Next, I’ve got the Outriders and Eradicators built, so expect one or both of those units end of month, depending how much of a pain painting bikes turns out to be. History suggests that hubris will be my undoing here, and that I’ll still be highlighting tires on Labor Day.

I painted 10 more Breachers, a miserable slog of 20 shield drones in one big batch, and another unit of railgun Broadsides, which closed out my backlog for this army. I am, for the time being, Done With Tau: 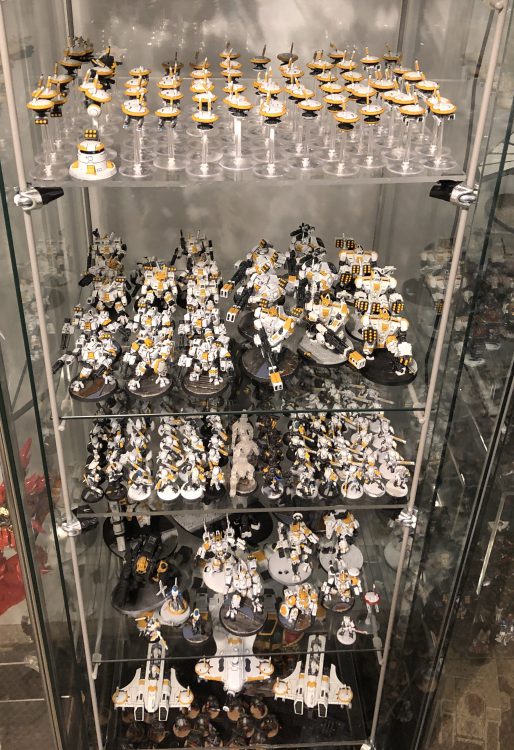 BattleScribe tells me this is 7,451 points. I have played one game with it.

I’ve painted much this year thanks to work, but I got my Indomitus Box the day after release day ready to paint up those lovely shiny Necron dudes and attempt to catch up with my painted model tally around this time last year (not a chance, I’ve only really got August free). Here’s my progress on the awakened menace so far:

Necron Ancient, Skorpekh Guard and Keeper of the glowing timer.

Heavy dest… Ok I give up. My plan was to paint the Necrons, but all those robed Marines and a recent stint of Dawn of War II again pushed me to paint these guys first (maybe they stole the Necrons, there sure is a lot of glowing green on those Blood Ravens). I also grabbed a squad of Eliminators and a Librarian just to add some more variety and to bring the total points up to about 1300.

The spray primer went on really badly on a couple of the units and at close inspection a couple of them look pretty lumpy, but from tabletop distance I’m really happy with how they turned out.

I’ve got a Redemptor Dreadnought lost somewhere in the UK postal system and a fresh can of Mephiston spray along with him, so assume by the end of August that I’ll have ignored those and painted the Necrons.

Keen to follow the Indomitus trend, I’ve painted the Primaris Ancient from the new boxed set! And by “new” I obviously mean the one from three years ago. Throws self-congratulatory horns.

The sensible move was to paint my chapter icon in the giant circle. Naturally I ignored that option and instead attempted to freehand a fingernail-sized version of the art I made of the chapter’s home world. Replicating a planet’s coastlines and city lights in a 1″x1″ painting went about as accurately as you’d expect, in that it didn’t, but hopefully it’s close enough to get the point across.

I shall now answer all the questions you didn’t ask about the heraldry. I figure the two star symbols on the banner represent Thonis’ two moons, Adelfos and Adelfi. The red trim is because it’s the Third Company’s banner. The bottom center panel is the captain’s personal heraldry; the Ultima symbol is a callback to the fact that Lucullus, the 3rd Company Captain, was in the Ultramarines before he was sent to help found the Cobalt Scions. The sword symbol marks him out as the recipient of one of the master-crafted power swords given to the four Ultramarines who founded the chapter.

For reference, here’s the original illustration wot I dun of Thonis:

This model is technically a conversion, since I had to chop down the original pauldron so I could slap a moulded one on top. Here’s some alternate angles of death:

If you’re curious to learn more about the Cobalt Scions, including the paint recipes and lore, you can find it on the Beard Bunker. If this banner or indeed the delicious heraldry of SRM have increased your desire to learn about freehand painting, Rob and I wrote a HTPE article on the subject. Next up on Charlie Comes Late to the Party, I’ll start work on my first primaris hover tank. My primary objective is to paint it before G-Dubz release 40K’s 10th edition boxed set.

I figured I’d put off painting my European buildings about as long as I could, and despite building 20 Arcanites, a Warhound and the Ogor half from Feast of Bones, I actually completed the buildings. This was possibly helped by the two weeks off work I’ve also just finished. With the varnishing and oil washes done, the only thing that really remains is coming up with some funny sign names, so if you have suggestions I’d love to hear them! The plan is for this to represent a small German town.

After painting initially very bright base coats, I washed every surface of the buildings with a mix of lamp black, chromium oxide green and burnt umber. Once the oil had dried a little bit I then used white spirit and an old cloth to wipe away the oil from the high points, leaving lots of recessed grime.

The most important hobby project I did over the last two weeks is the one I just finished last night, which is setting up my brand new hobby station! I picked up an Arttystation Symphony and my goodness, this thing is incredible! I’ve otherwise been batch highlighting a ton of Indomitus models and planning out what’s next (two Impulsors), but I’d rather save all of my Indomitus goodness until it’s done before I show it off. Until then, gaze and be amazed at this awesomeness!

I have been tearing into the indomitus box like a starving animal, these are some incredible models that I cannot tear myself away from painting. I don’t know if I am rushing to get stuff done before more things drop or because these are the best thing GW have put out to date, either way I have made a ridiculous amount of progress in just a few short weeks.

At this rate I am gonna finish the box before the month is out! if you have any interest in seeing how I painted either scheme you can find my salamanders in the HTPE Salamanders article and my necrons in the HTPE Szeras article, both of which have some other fantastic approaches!

I started the month with some delicious, palate cleansing hobby vegetables, making further headway on my Indomitus Necrons by tackling the first unit of Warriors.

These guys…eh, they’re fine. I don’t love, love the models in the same way as the Skorpekh stuff, but they paint up quick and Tesseract Glow continues to be my friend. I’m not super looking forward to doing the second ten, but definitely will at some point. Just them, the Scarab bases and the Overlord to go from the box.

40K is a land of contrasts, however, and for my second project of the month it was on to something much more exciting. After a bit of tinkering I’ve finally come up with a 9th Edition Aeldari list that I’m properly sold on, and that means I’d run out of excuses for not tackling one of my longest outstanding hobby projects – The Yncarne. After a bit of wavering between options on schemes I ended up deciding to go all guns blazing on trying something a bit ambitious. The result, to my pleasant surprise, has come out pretty well.

I will be going into a bit more detail in how it came together in an upcoming HTPE, but for now I shall just affirm the Contrast paints are strong, real and my friend. Next up, I’ll be painting up a buddy for him in the form of a Wraithseer, which will be absolutely no surprise to anyone who read my Ynnari Faction Focus.

Still working through my Death Guard army I’ve hit a slower couple weeks with only 2 models completed, hoping to get a trio of Blight Haulers done next after having seen those tasty new multi melta rules. The Plaguecaster is an amazing sculpt, really happy to have gotten a set of the Death Guard Heroes models. 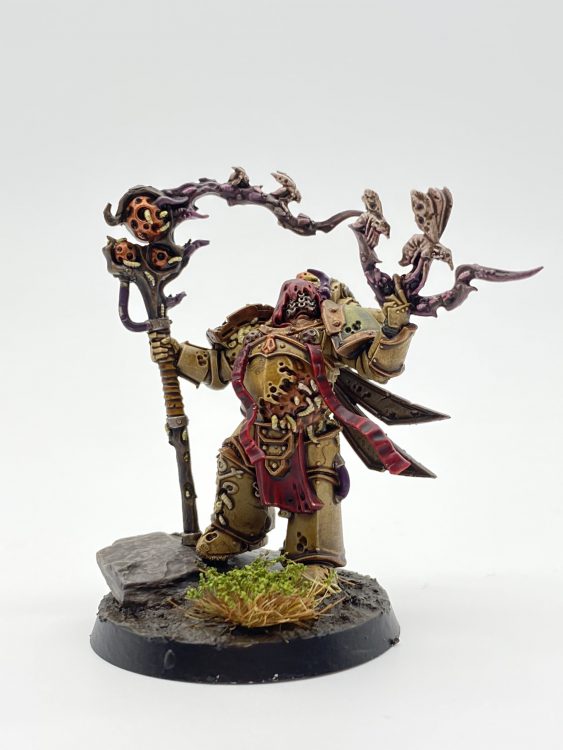 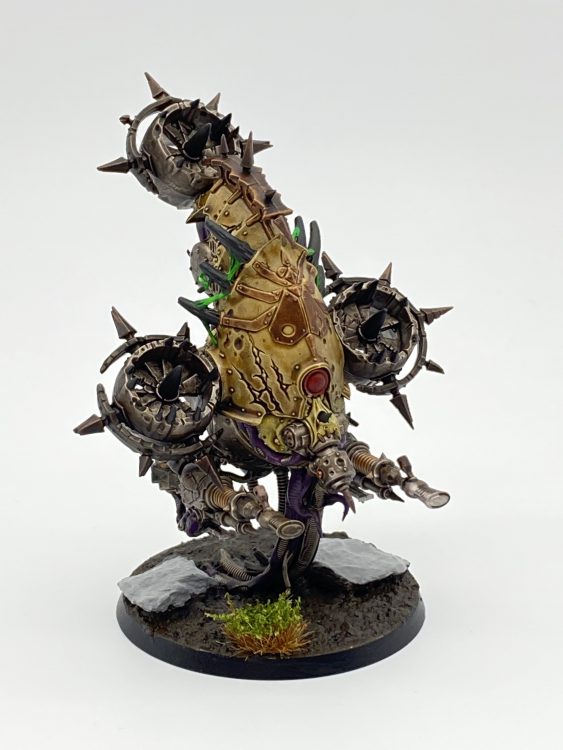