Christmas is nearly here! The Goonhammer team are looking forward to the holidays, even as they look across their vast wastelands of plastic and unfinished projects and think “I should really have gotten more painting done this year.” Here’s their efforts to combat that a little.

After doing an audit of the backlog and clipping sprues into bits boxes, I found myself with less than 20 models in the backlog still to paint. Which to be honest was rather horrifying – a queue of different projects is something to look forward to, kind of like when we were still able to look forward to going on holidays. The Imperial half of the original AI starter was picked to go first, as a quick and easy thing to paint up. I went with a pretty common scheme for them and was quite happy with the results. I was super stoked when after posting them on twitter, I got the nod to appear on the GW hobby round up for a second time and was first up which was pretty awesome. 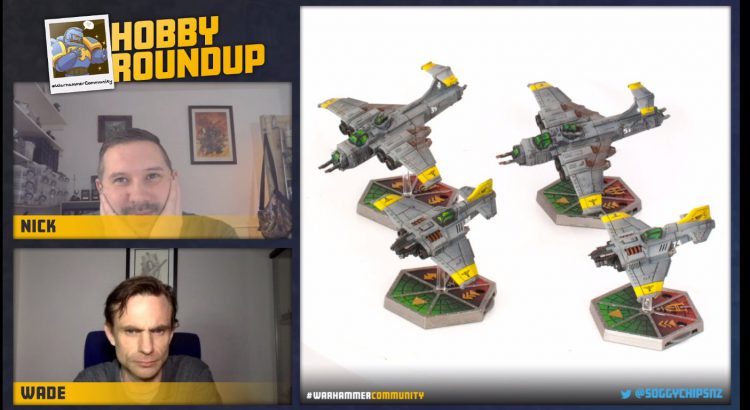 Next up I started work on some spare GSC rocksaw acolytes which I was keeping for a rainy day, although they are still unlikely to see the table anytime soon. I was lucky enough to snag one of the marine Christmas boxes, so I’ve got a bit of a backlog again to look forward to working through. That was of course, until Cyberpunk came out – the rest of the month is going to be a quiet one for me on the hobby front 😛

I really seem to be loosing track of time at this point, in the last couple of weeks I have been done way more then I thought I did. I finished off the other three wraiths to make a full unit somewhere near the start.

I started into infinity, with a test model…

Then I felt it did not nearly live up to my desired level of detail and quality, so I just turned the knob right up to 11 and tried to push my boundaries.

I feel a lot better about these two, but I still think I can do better still! To take a break I also spent some time on some quick eldar models.

I then finished off this half of the month with a HÙNDÙN, yet another model from the Kaldstrøm box.

My hobby output is still fairly slow here in the boxfort, and it won’t really pick up until we’ve finished our move out to Central Oregon. Still, I thought I’d give Boston a bit of a sendoff by painting a few more Fallout models – in this case the extremely appropriate Boston Companions set!

I had a fair bit of fun with this trio, as they really are a distinct set of characters who don’t share many aesthetic elements. I made most of the metals similarly rusty on Cait and Piper to tie them together, but X6-88 shares basing and not much else with my other Fallout minis. He painted up mad quick though, especially compared to Cait and Piper, who involved some custom color mixing for the corset and newsboy cap, respectively.

The little rectangle in Piper’s hand is curiously underdefined, so I made it look like a Holotape. One of the most fun things about these minis is researching all the sundry bits and bobs from the Fallout games to make them game-accurate. It feels kind of like researching Historicals in that way. Of course, it wasn’t all Fallout minis this month – I painted another character too!

The Blue Meanie here was going to be a Daemon Prince conversion, but I just couldn’t make any wings work on him. I still got to use him as a counts-as Daemon Prince in an AoS game though, and he fit in nicely. I learned a ton about painting skin with this big guy. I can get away with more traditional line highlights on smaller models, but on muscles this big they just look unnatural. My buddy @40khamslam helped me out a ton by coaching me through some different skin painting techniques, and helped me make this dude look just how I hoped he would.

Next up, I’ll likely close out 2020’s painting with the same model I opened this exceedingly cursed year with: The Chaos Chariot. I started working on it the other night and hope I can wrap it up before Christmas when I move from the Least Coast to the Best Coast. It’s not proving to be quite as hateful as the first one was to paint, so I should hit that goal.

FINALLY I got some painting done. I started a second (third, kinda) Legio for Titanicus that I’ve been wanting to do for a while, Mordaxis! Started with the Warbringer that was going to be in Vulcanum colours originally but was just really feeling the purple. So then I did 2 Warhounds along with it and am now working on 2 more Warhounds and a Warlord, and a bunch of Knights….I’m matching basing with my Vulcanum engines so I can share the Knights between them, and it also matches my artic themed mat for home games. Also added some Vanguard Minatures pieces to the bases along with Forgeworld Titanicus terrain to help give sense of a larger conflict that the Titans are part of, and to show their massive size in a tiny scale! 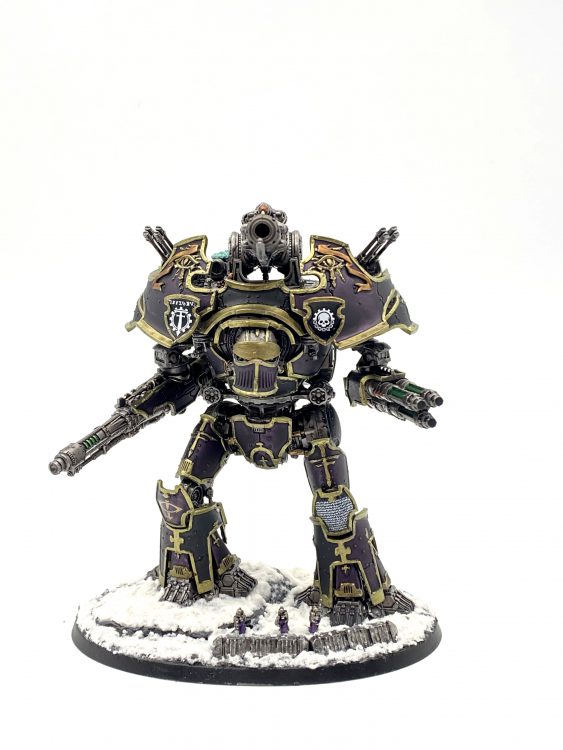 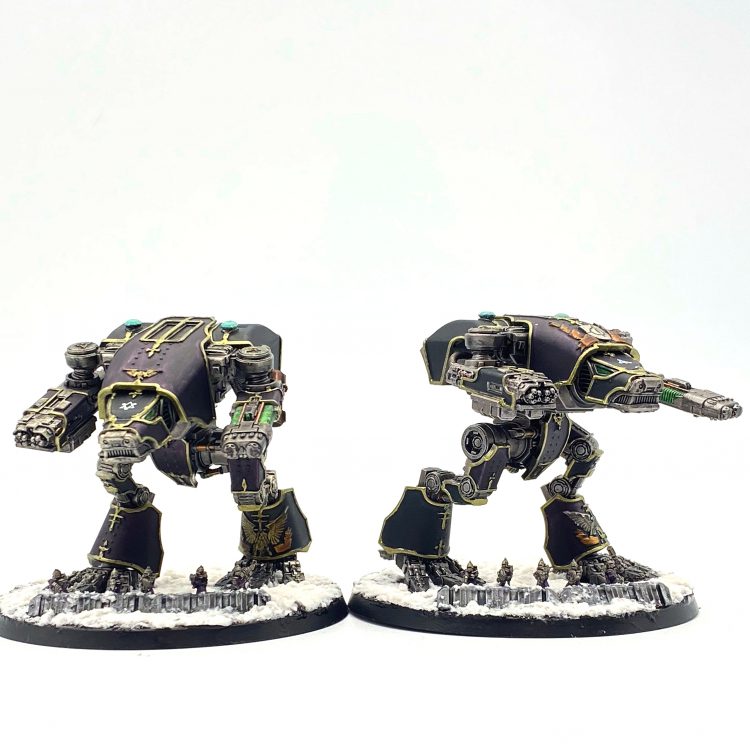 This is probably the first and only mini in my collection who’s not holding anything in their hands, so you know it’s a kitbash. Also the dead marine has been replaced with the newly patented hero slope, brought to you by green stuff and a mild aversion to hero rocks. Hell yeah! Subverting genre expectations! Just kidding, it’s a partially submerged hero rock.

I painted some Necromunda cops. This is bad, because they’re cops, but it’s also good, because a lot of them are going to get shot and set on fire. The one with two shields is my favorite. 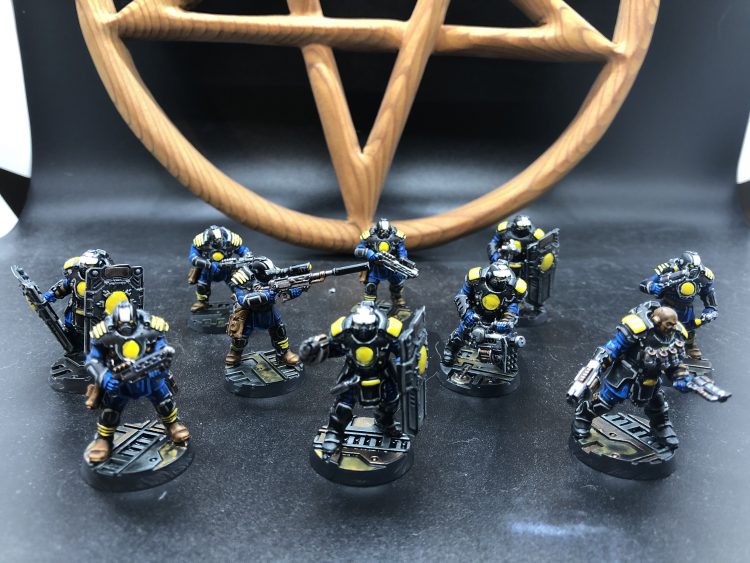 The only other Hobby Progress I made was assembling an entire Indomitus set in an evening, and starting in on painting some of that. If you’ve been waiting on a GW order to ship, or hoping something would come back in stock, I’m sorry, it’s my fault, my personal MTO Indomitus set is the cause of all your suffering. On the plus side, I finally read the 9th Edition rules (most of them).

I painted some Bladeguard Veterans, I seek your validation. 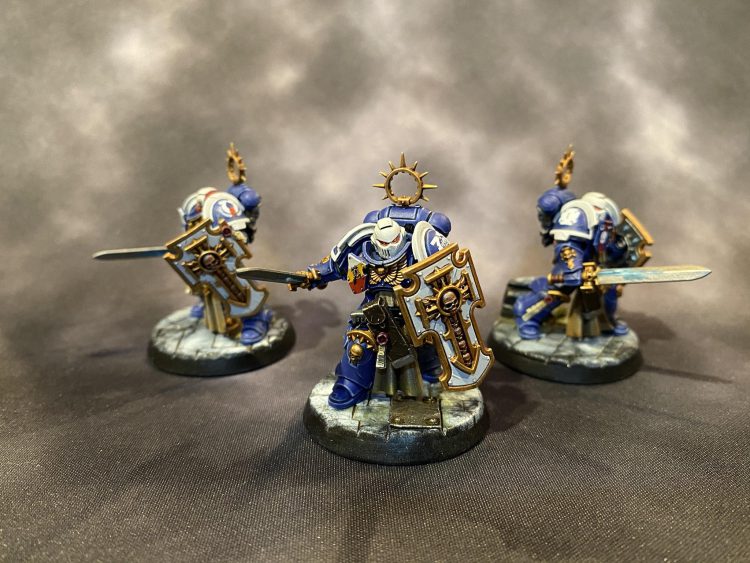 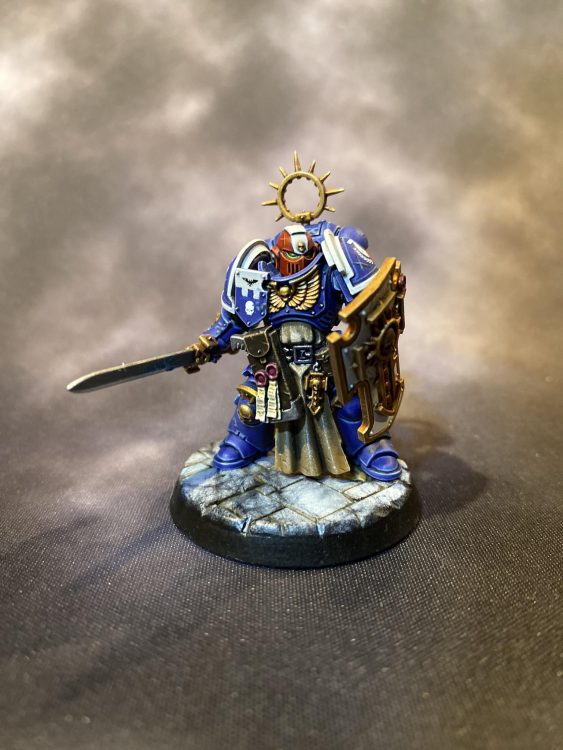 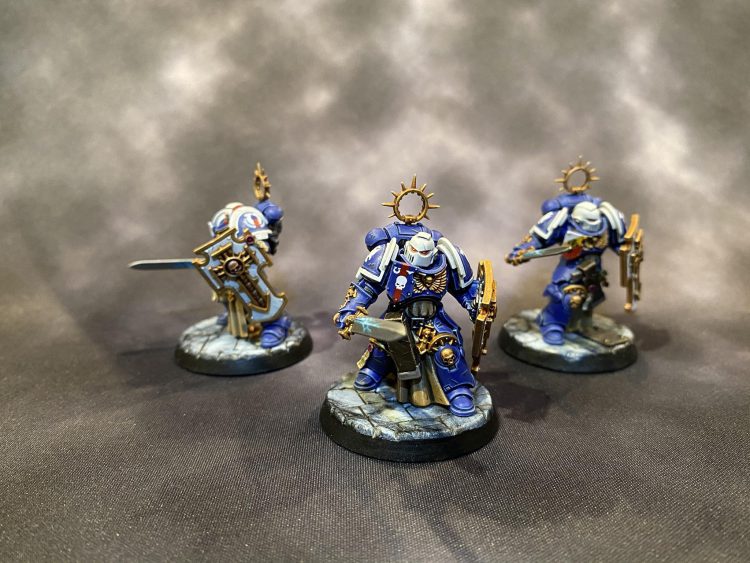 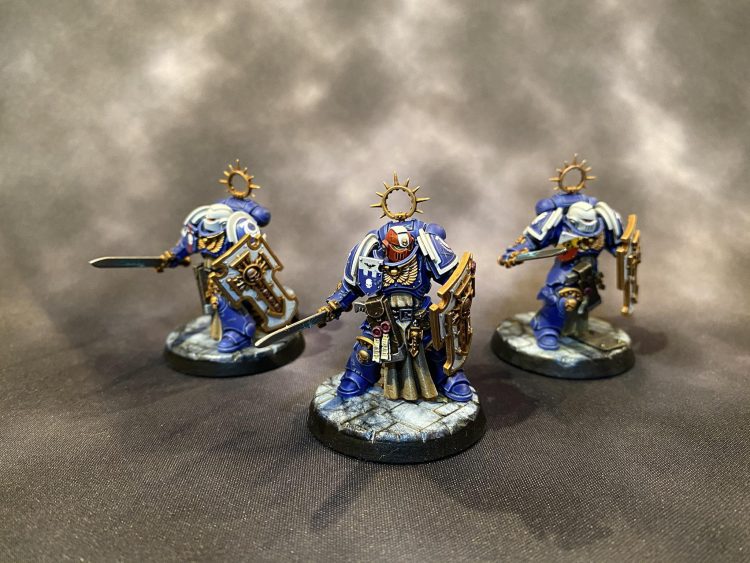