January is over already! Our authors have spent it well, making some great painting progress – and now we’re sharing it with all of you! 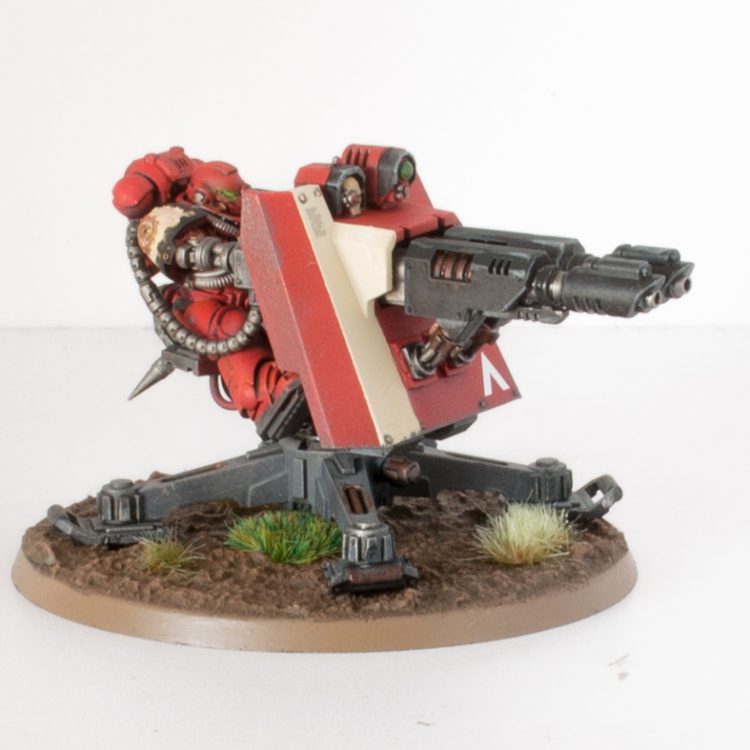 After painting the two dreadnoughts earlier in the month, I thought I would treat myself to something different in the form of a Firestrike Turret.  My first proper introduction into 40K was with Dawn of War, where Tarantula turrets featured a fair bit so I was surprised to never see them on the tabletop. I’m not exactly sold on having a techmarine babysitting one of these on a 1:1 basis but whatever. 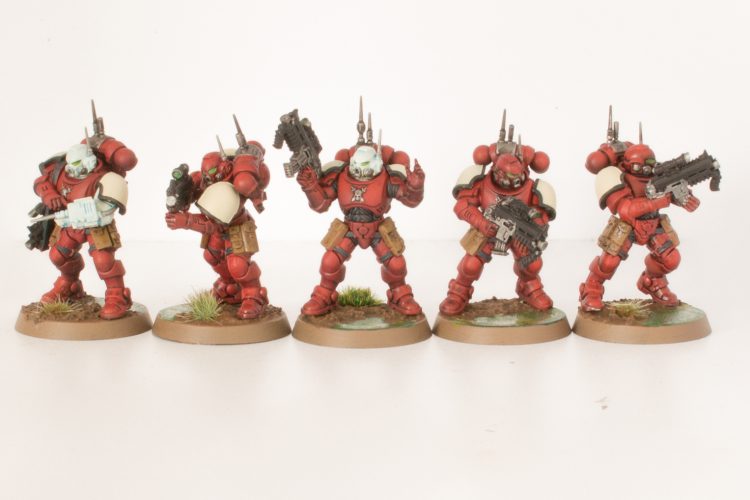 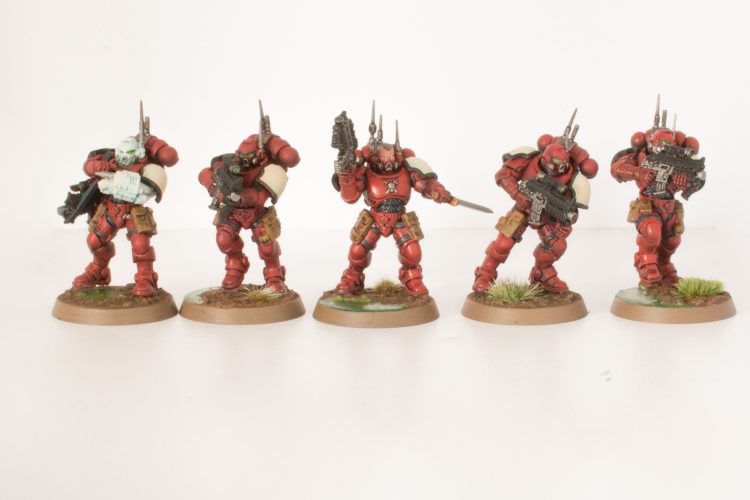 It was then time to get to work on the Space Marine Interdiction Force I picked up last month, mashing the kits together to get ten Incursors and ten Infiltrators, as who honestly wants Reivers? The Infiltrators above are mostly Reivers, with a head swaps and backpacks changed over. To make the guns look the part I had some Anvil Industry scopes lying around which fit on perfectly and do the trick nicely. Next month will see me finishing up the Incursors and awaiting the release of the Warmaster Titan.

I haven’t really painted anything since the beginning of September, but thanks to the rubbish January weather I thought I’d pick the brush back up again for s bit. I had some spare Chaos Warriors lying around from my old Undivided Chaos army and decided to paint them up as servants of Papa Nurgle.

I already had another 5 Nurgle ones from the aforementioned army, so with some rebasing I now have a solid unit of 10.

Next up, still feeling Nurgley I ordered The Wurmspat, who were a lot of fun and quick to paint up:

Well they’re basically Putrid Blightkings and a Sorcerer, so another Sorcerer and a Lord of Plagues will fit in nicely:

A Hero unit, better add another bigger one:

The Daemon Prince of Nurgle above was a simple conversion using the wings from a Plague Drone and a cut scythe piece from I think a Blight King?

How about something bigger…

This guy was my speed painting challenge the other Sunday, he went from primed Death Guard Green to the above in approximately 4-5hrs. He’s also my new favourite model.

I also painted some Infinity models for a bit of variety this month:

And one of the Yu Jing models from the Starter Set:

I’ve just got hold of the Slaves to Darkness Starter set and a Harbinger of Decay (for more Nurgle goodness), Luke and Darth Vader from Star Wars Legion and some more Infinity models for working on over the next few weeks, so they may or may not be seen in the wild soon.

A month into the year and I’m going hard on the Specialist Games. I was planning on getting an Escher gang going early last year before House of Chains took my focus right back to my Goliaths. With all the beef out of my system, I’m back to these models that I’ve had hanging around since the Necromunda: Underhive starter came out back in 2017.

The ganger with the lasgun at the center left was the test model for this gang, in a rare move where I did a test model instead of just bashing out a dozen models or whatever. After batch painting a dozen hobbits with freehand Hawaiian shirts, it’s a relief to get back to 5 models at a time.

I’m going hard with the specular highlights on these, and having a ton of fun painting animal prints on all their loincloths. Changing up the hair between gangers is a good time too, and the Forgeworld bits are incredible. I’ve got 5 gangers still on sprue, then 5 gangers and the Wyld Runner/Death Maiden/Phelynx set built which I’ll be knocking out next. I’ve promised myself not to buy any new stuff until I paint all my Eschers, so until I knock these out, Khagra’s Ravagers will have to wait!

I slapped together some more Primaris from the bottomless pile of Primaris sprues for some future articles that editors are still trying to make sense of. Plus I threw together a Lord-Arcanum on Gryph-Charger for no reason other than he looked pretty cool.

Mostly smooshing Necron Warriors and trying to take my time with my Chronomancer. I’m using black undercoats with the rank and file to give them a more tarnished feel and with the characters I’m using a white undercoat for a much brighter look so they stand out more.

Stinky Steeve the Daemon Prince is at a table top ready state enough for my liking (it looks good 3ft away). There’s still plenty of work to be done and I haven’t even thought about what to do with his base. I will go back and add more details at a later date but other projects are clamouring for my attention.

I’ve managed several Incursion level games this month with my new shiny murderous robot friends and I may have even accidentally won two of them through no fault of my own. I am really enjoying the Crusade format and watching my robot children bloom into even more deadly robot flowers.

The Death Guard project is still kicking along. I’m currently puzzling out how to update my three 5 man Plague Marine squads into something “legal” because I was too busy cooing at the Crusade rules to notice the changes to the loadouts.

The issue is of course is the current three squads each come with one too many blight launchers. Luckily I have a heap of other built Plague Marines I have on hand to help me with this problem… I don’t want to think about what could possibly be hidden unbuilt in the pile of shame.

My brilliant idea is to make them into 10 man squads by demoting the old champ with the plasma gun into a mook with a plasma gun, add another plasma mook plus two more bolter mooks, a chump with a sigil/icon and a proper Champ with a powerfist. This way I can still use squads of 5 for the most part if needs be.

I’m also thinking about buying a box of Plague Marines so I can build up a mean close combat squad with lots of choppy weapons to fill that tiny imaginary gap in my collection… I do like buying things.

I’m still trying to work out what I need to add to my Necron army for the next round of the slow grow. I should probably increase the squad sizes of the Warriors but I should also probably look at adding something with big guns to pop tanks from a distance rather than walking up and tearing them into confetti with the Destroyers.

Painted the first Space Marine in over a year and a half. Always fun to revisit the new models. This guys is Flesh Tearers marine for an upcoming article. I’ll get into the painting details there!

This month was also getting into some objectives I’ve had sitting around for waaay too long. This is me eating my hobby vegetables. Still managed to have fun and not worry about fine tuning anything.

This was an indecisive month for me, as I spent a lot of it thinking about color palettes for Necron vehicles. But I think I’ve settled on one, and plan on going full-bore on Necron models next month. For this month, however, I only managed to paint two models. The first being a Necron Technomancer which my awesome wife got me for Christmas.

I’m extremely happy with the way the glowy orbs turned out, especially his tummy-tum orb. That thing is radiating pure anger, and I love it.

I also painted up a Skorpius Dunerider during the first couple days of the month. No particular impetus to paint it, other than it’s been sitting in a drawer, assembled and primed, taunting me for months.

And that’s it for me. A rather short round-up, but I’m hoping to kick it up a notch next month!

Just a few things from me for this half of the month, I started by doing a bit more infinity continuing on rounding out the PanO and Yu-Jing forces I started last month.

I am pretty happy with how the face on the Mech-engineer turned in particular!

Then for a break I went back and did some quick Windriders: