With a new edition on the horizon, the Goonhammer crew have redoubled their efforts. The backlog must be cleared before 9th. The backlog is the enemy. Backlog delenda est. See how they’ve fared in our mid-month hobby round-up!

If you’ve been reading these round-ups, you’ll have seen the flood of models I’ve painted in lockdown. The good news is that since the last time I physically went to work I’ve painted 100 models! Not many of them were this month, but I traded out painting masses of infantry for getting through some vehicles that have been sat on the shelf for a while – two Invictor Tactical Warsuits, one Relic Deredeo, and a Repulsor Executioner! It was fun to paint a bunch of bigger stuff this month.

I also painted terrain! I bought the Kill Team starter back when it came out, and then never did anything with the mass of terrain in it. I have enough space at home for a table and mat, but I haven’t really gotten around to painting any terrain to go with it. With the release of 9th and the possibility that the Sector Imperialis ruins are actually worth using, I decided to get on and get them painted. I finished about half the set this month, mostly the smaller walls, which leaves me the big pieces to go. I saved a bunch of time here by skipping on much of the possible detail and instead going ham on making it look really beaten up. This is a ruin in a warzone, after all. I’m looking forward to doing the big pieces.

I’m still painting up my Death Guard, hoping for when they’re beefed up by the upcoming rules in War of the Spider. I’ve been planning on adding a Chaos Daemons detachment to them, and so in the last two weeks I’ve added a Foul Blightspawn and two squads of Nurglings to my group of merry blighters. Next up: Typhus.

I’ve had a bit of a frustrating month. I over committed on what to get ready to paint and built and primed my Repulsor, Impulsor and Redemptor Dreadnought. With the way I am painting my army they were all in sub assemblies so I had parts of primed models all over the place. Eventually I managed to get my act together and get them all painted, but then the bases I’d started for this army really started to bug me. I did them following Angel Giraldez’ guide to using Pigments for basing and whilst they looked brilliant they’re clearly meant for display pieces, and certainly not white models as every time I touched one I ended up wiping pigment onto the model, no matter how much I sealed the base. Since I want to play with my models without worrying about covering them in pigments I ripped off all the models I’d already done and tried a new technique which I actually think suits the army better!

I hit a milestone this Saturday: finishing the final 5 marines from the battleforce box I bought for my Ultrasmurf successors, the Cobalt Scions. There were only 20 minis in the box, but I’ve been at it, on and off, for about 10 months. Responses to spending about 6 hours painting each marine probably range from “those are rookie numbers” to “I’d rather shit in my hands and clap.”

The original objective was to have a force consistently painted to what is, for me, a high standard. In other words, a showcase army. I’ll definitely expand on these guys in the future, particularly given the new hotness GW just revealed, but for now I’ll take a break from the thicc blue line and knock out some other bits of my backlog.

If these Marines have left you with a thirst for blue, Goonhammer’s own HTPE: Ultramarines article has you solidly covered. If you’re curious about how I did mine in particular, I’ve just put out a step by step tutorial over at the Beard Bunker.

It’s been a pretty busy month hobby wise for me! A group of us decided to get in to Horus Heresy, and that means painting a whole lot of marines, so I started this month by blasting through 120 Blood Angels. I feel like I forgot to mention something though? Oh, they’re the definitely not Space Marines from Vanguard Miniatures, and they’re only 6mm tall. I also made some progress on my long running conversion project for AoS28, and a little more progress on the Warlord Titan I keep promising myself I’ll finish.

Work and the stressors of the real world have kept me away from the hobby desk and Goonhammer as much as I’d like to be, but I still got a good amount of painting in. Turns out this whole “hobby as meditation” thing I’ve been doing for the past 15 years is more important now than ever. The first unit I painted this week were a unit of Primaris Incursors for my Ultramarines. Despite what my Badcast co-host and Necromunday writer Dan thinks, I think they’re pretty terrific.

I was told that all the caution stripes made them “no longer stealthy”, so my second squad had to be stealthier, sneakier. What’s harder to detect than caution stripes? You guessed it, hot rod flames.

Next on deck: A single Intercessor. He might not seem like much, but he’s the replacement for the fallen brother from April, and the last model left in my Ultramarines backlog. With him, my Ultramarines will be up to 4000 points, and, for a blessedly brief time, complete. Expect him and maybe even one of those Army Showcases Greg keeps bothering me about real soon!

The past two weeks have been busy with moving prep for me, but while packing I found one model I had misplaced and was hiding behind a couple boxes – a Primaris Chaplain. I figured I had to honor this forgotten soldier, and I wanted to try out a new distressed leather painting technique.

There’s a really cool Chaplain and Judiciar (going to take a long time to remember the spelling on that!) coming in the new edition’s box set, so I wanted to refresh myself on painting black armor and leather. I went a bit further with the highlights on the black ceremite than I had done in the past with my Deathwatch, and I really like the extra contrast it gives – the brighter highlights make the black just look blacker. For the leather, I followed Twitter user @ivan_tashun‘s guide on painting distressed leather, and it’s definitely the best heavy leather I’ve ever painted. He’s since uploaded an ever more fancy guide, and is definitely worth checking out. 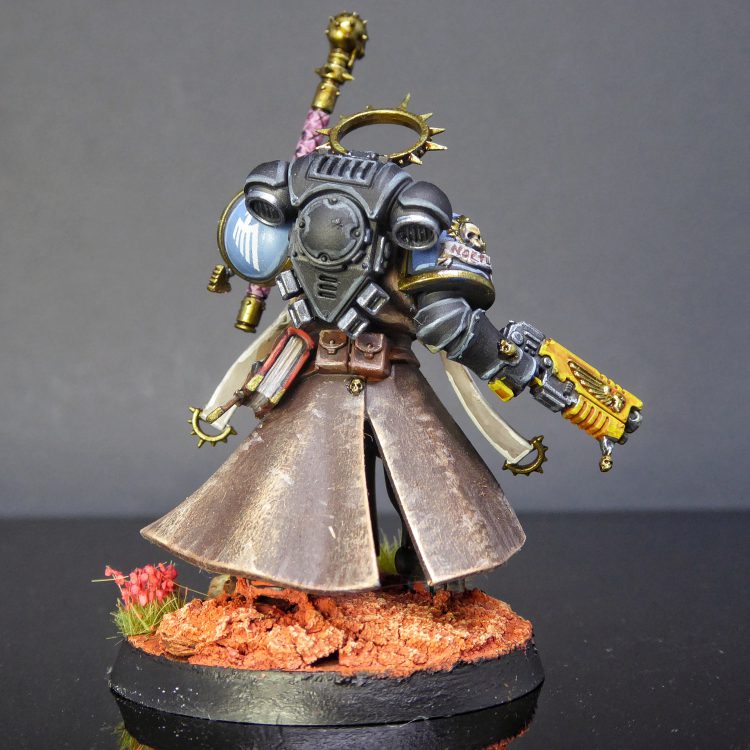 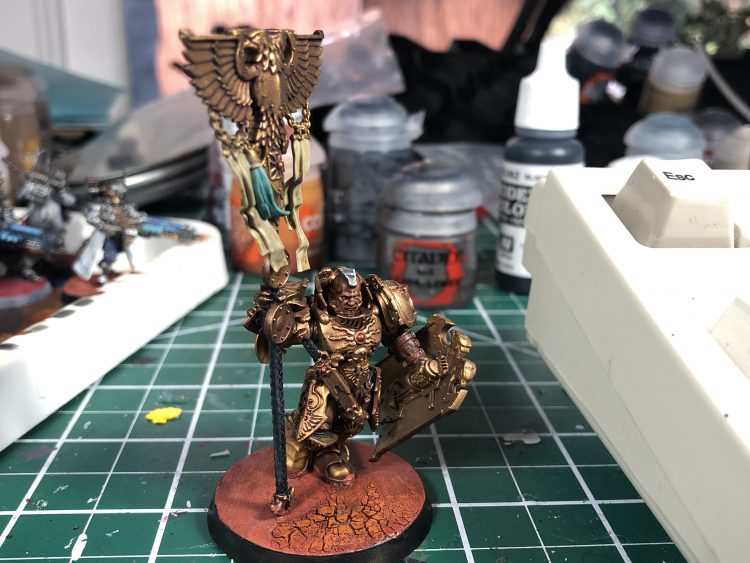 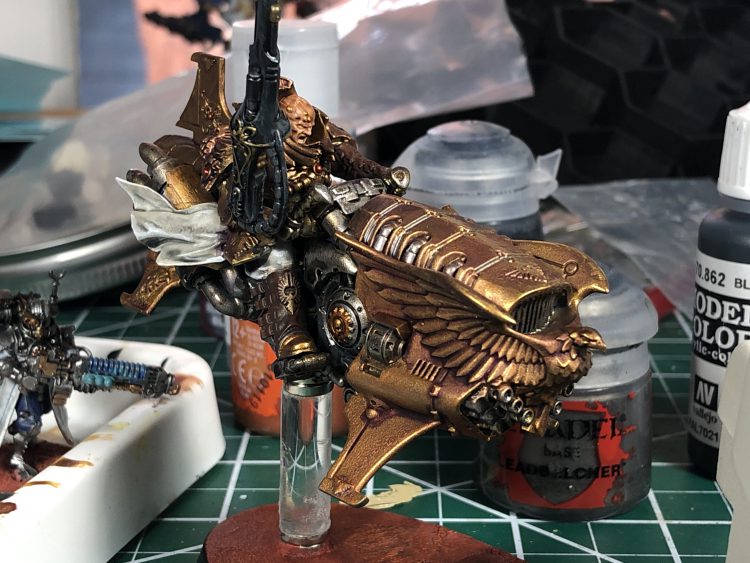 I bought a bunch of second hand Custodes a year or two ago because they were an amazing deal. Since then they’ve sat in the pile of shame doing nothing. Over the last couple of weeks I painted them all. Most of the work was just spray painting everything gold and filling in the details so it went pretty quick.

On a related note, I need to get some sort of backdrop for my light box. There’s obviously something that I’m doing wrong there.

I’m starting to scrape the barrel on my backlog, which is good with the new 9th edition starter on the horizon. I’ve semi challenged myself to getting most things painted up before splashing out on some new models, so next up at the bottom of the barrel were 20 ETB infiltrators from the Shadowspear boxset. After numerous failed starts with my airbrush dying and general lack of motivation I was able to crack through these upon discovering a new series to watch, Devs.

Doing a batch of 11 in one go was pretty hateful and I’m not that keen on the remaining 9, but it seems like a safe goal to achieve for the rest of the month.