Half of 2021 has gone already, but the paint must flow… here’s what we’ve been working on!

With a new baby around the place June was a less productive month than May – only 24 models compared to 56! That said, I finished a few things I’m very happy with, including a few bits from the Dominion box including one of my favourite models in Warhammer, Yndrasta:

Also from Dominion we have an Annihilator, and a Vindictor. The Annihilator was actually the first thing I painted, but I went for the basic box scheme for lack of other ideas and I’ve now changed that up in favour of using the Yndrasta-style bronze armour as per this Vindictor. What I do with this guy (and his friends, who are mostly painted in the same scheme) is an open question.

Dominion makes it very easy to launch your way up to 2000pts of Stormcast, and having settled on a scheme I really like and a fairly low model count to achieve it, I guess this is the pull I needed to really properly start playing AoS.

Away from the Mortal Realms I also continued plugging away at my Drukhari, with the final 5 Trueborn in my new scheme, a new Raider, and a new Venom:

Supplementing these are a second squad of Incubi, and some new Scourges (which adopted the Stormcast scheme both as a test and as a way to quickly get them painted up). For the latter half of stuff I painted I switched up my usual thing of taking pictures on the original Kill Team board and started using the Necron tomb boards from Pariah Nexus instead – which I think was a good choice and will continue in future. Nice to get some value out of that box other than the Heavy Intercessors, too.

I’ve continued on the Adeptus Titanicus streak, getting two models completed in the past fortnight. The first was a Forge-fane from Grimdark terrain, which SRM aptly dubbed an AdMech Monolith 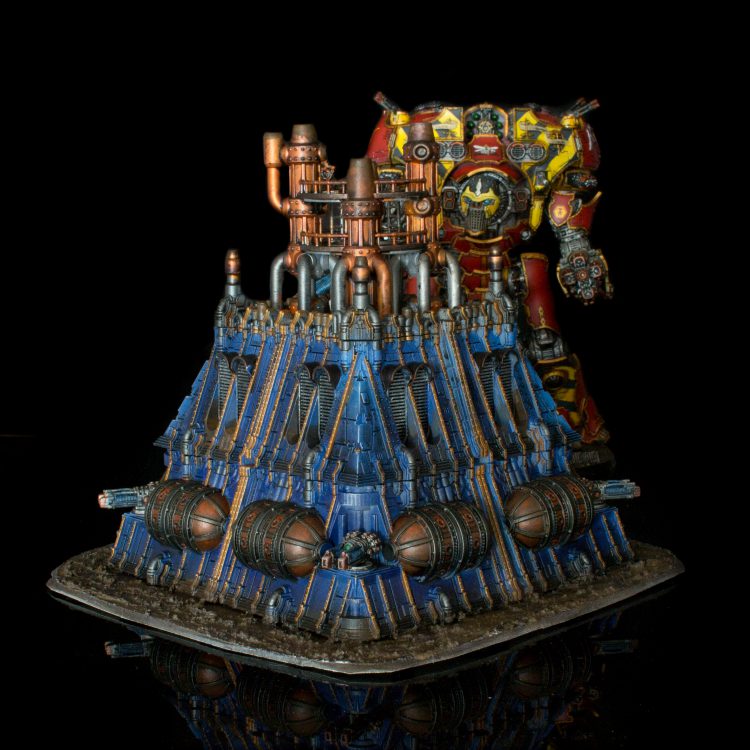 Typically these would be the red of Holy Mars, however after painting up seven Ignatum titans in a row I needed a break and instead went for blue. I’ll be talking more about how it went together in our upcoming review. Speaking of Ignatum… 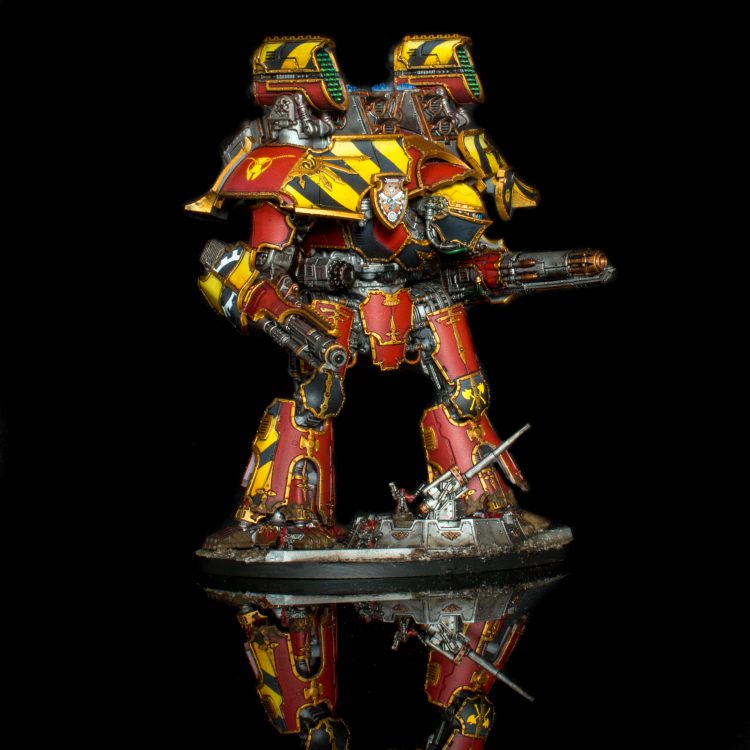 Next up from my Precept box was a fire support Warlord, which painted up quickly and still amazed with how good Vallejo Medium Yellow is. Only the Warbringer remains, so that will be next up on the agenda.

This month saw a slug wizard for Slug Wizard Spring, an event hosted by @ibrewtiny on Instagram. Check out #slugwizardspring for lots of slug wizard goodness. This build is based on a metal Empire mounted grey wizard, with green stuff slug body and some bits from the plastic dryad kit. He will make a great firewyrm of Tzeench for a Hordes of Chaos army… 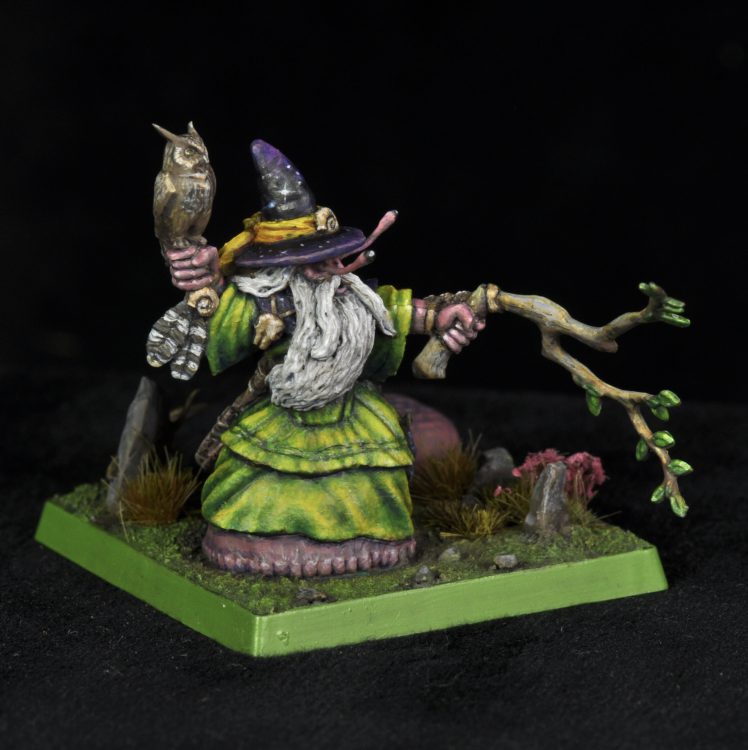 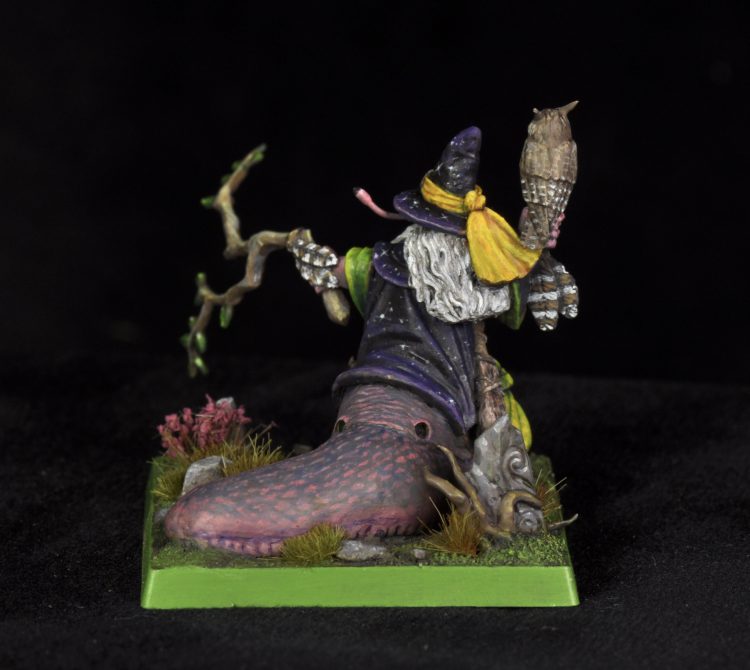 …which bring me to the other model, a mounted chaos sorcerer for that army. I’m having a lot of fun painted these metal models. All the details on some of them can make everything look muddy until everything has been clearly defined. I find getting a good black line with slightly watered down paint around the edges of each detail helps to separate each element. A targeted line of Nuln Oil or Druchii Violet can also help do the same thing. 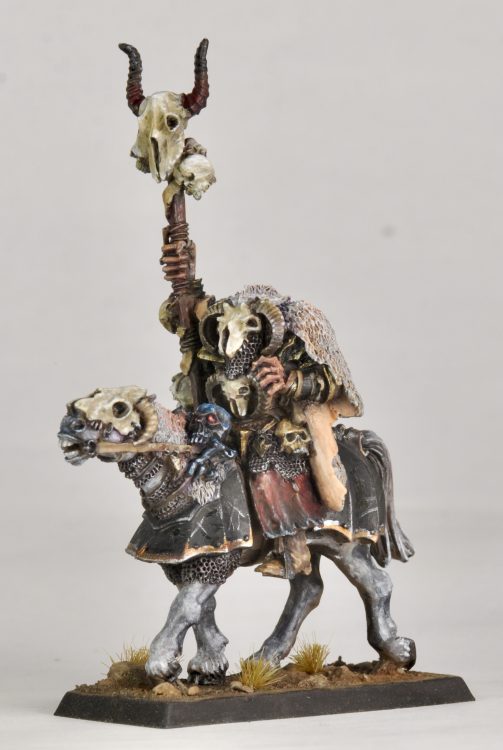 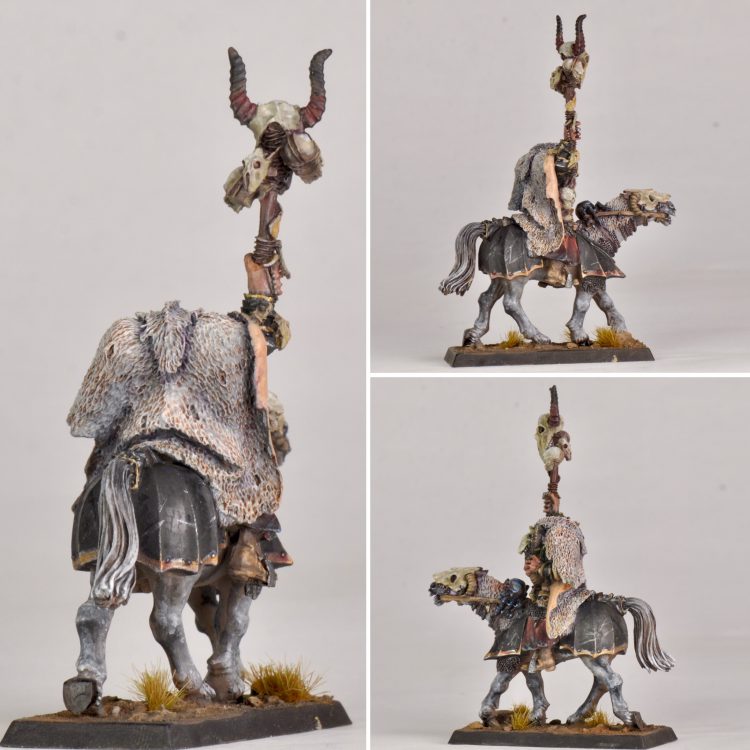 June was a really busy month for me. I got pulled into an escalation league at my local gaming club and decided to paint up a Solar Watch Adeptus Custodes force. 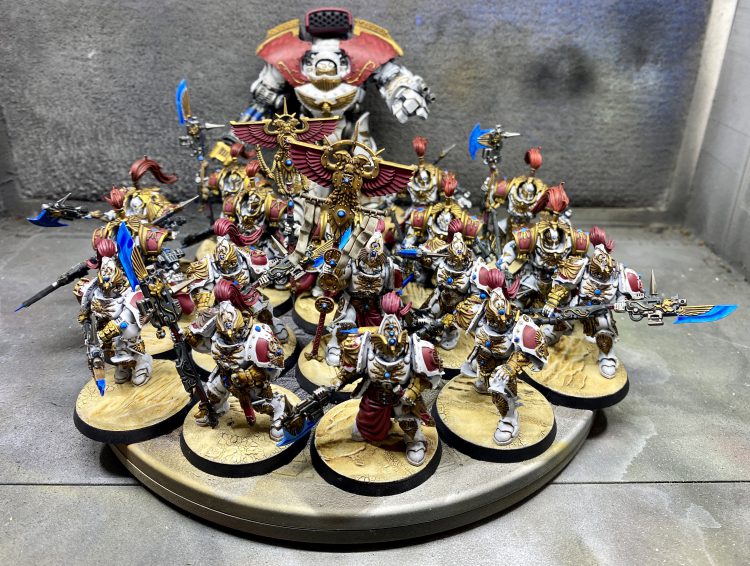 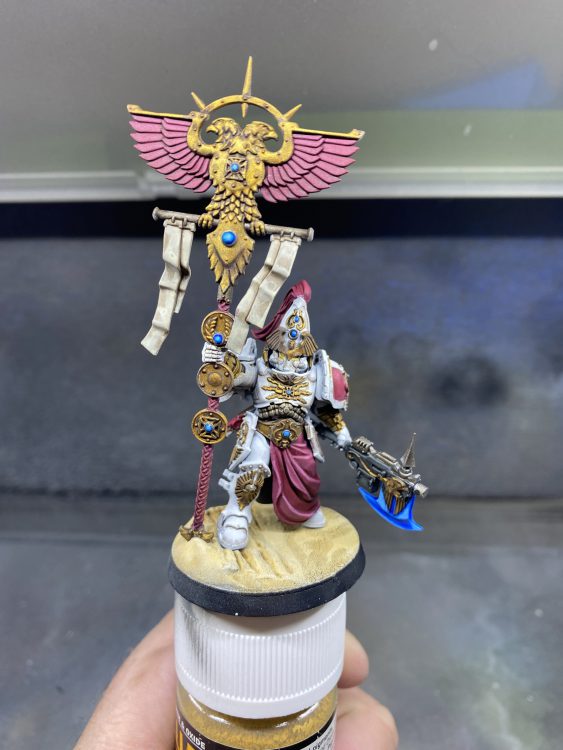 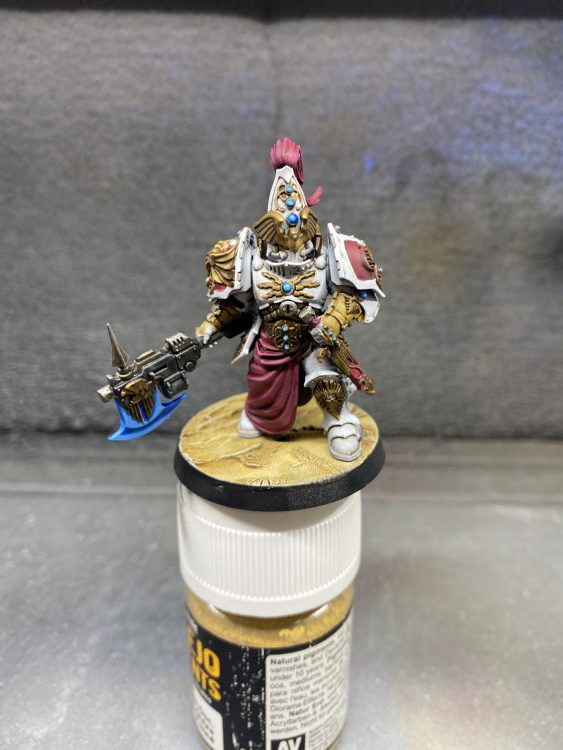 This month I was fortunate to have received an Age of Sigmar: Dominion box by Warhammer Community. It received the bulk of my hobby time this month, as I tried to paint as much of it as I could in about a week and a half. I’m really pleased with how much I ended up completing from the box. In total, I painted 53/60 models; the only models remaining being characters that I didn’t want to rush through. When I was settling on the paint schemes for each half, I wanted to do schemes that would be efficient, eye catching, and that would also stand out among a crowd of AoS: Dominion posts. For the Kruleboyz I went with a pale, cold skin tone, dark natural fabrics and moonlit white shields. For the Stormcast Eternals I wanted an organic grey-green armor, dark detailing, clean steel, and HAWT Orange weapons and OSL. Overall I really enjoyed painting both halves of the box, and I can’t wait to add to these forces and start playing AoS! 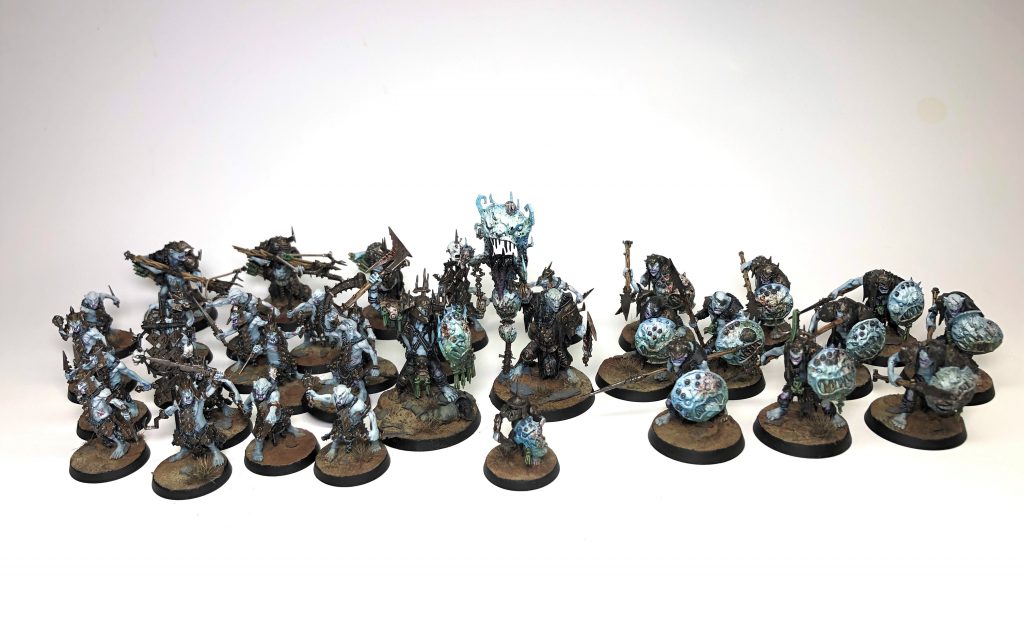 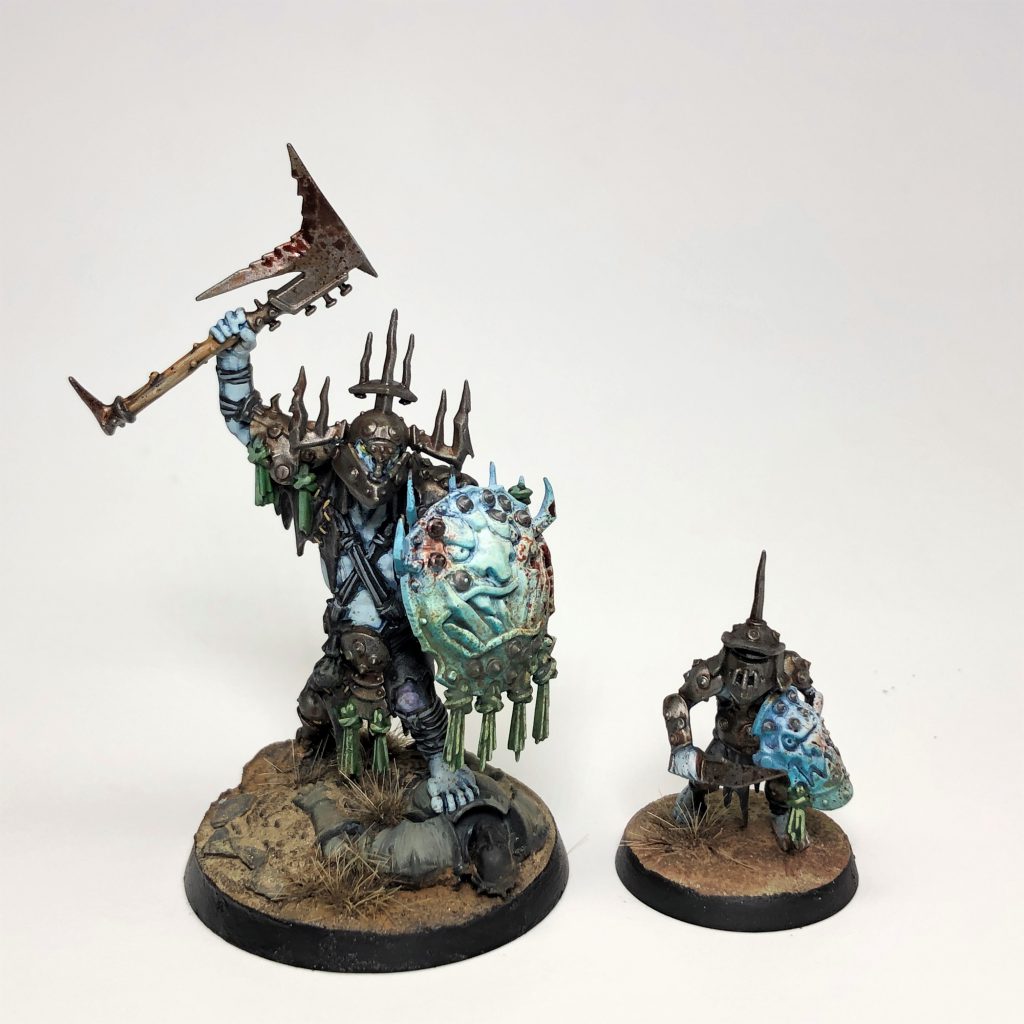 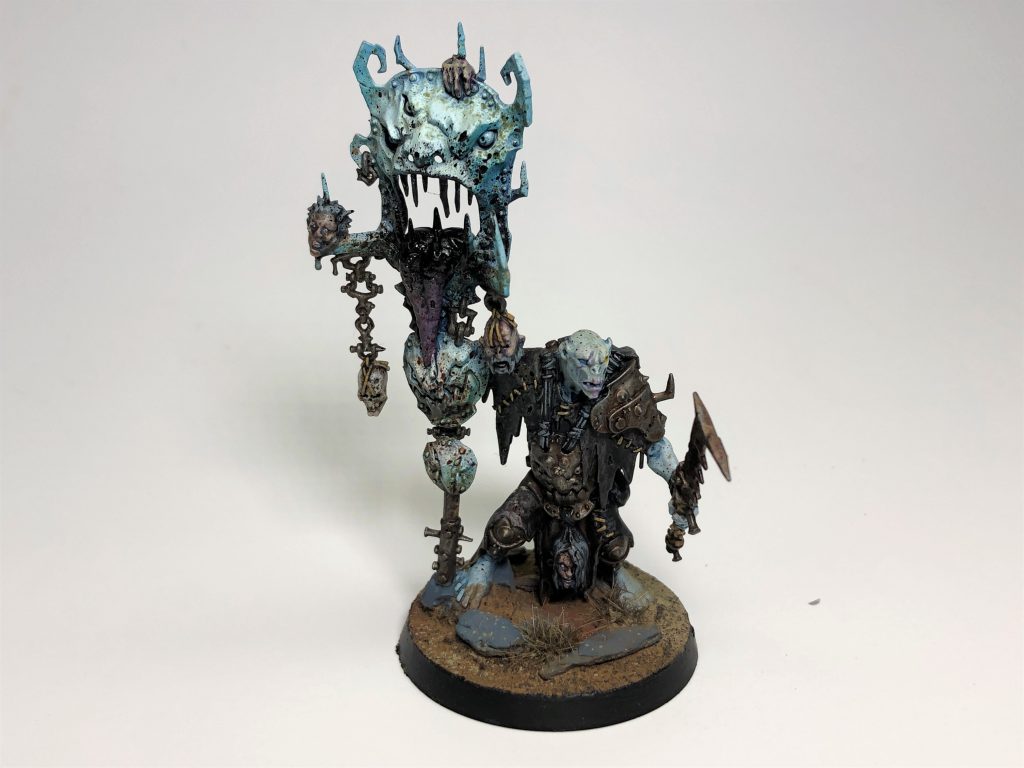 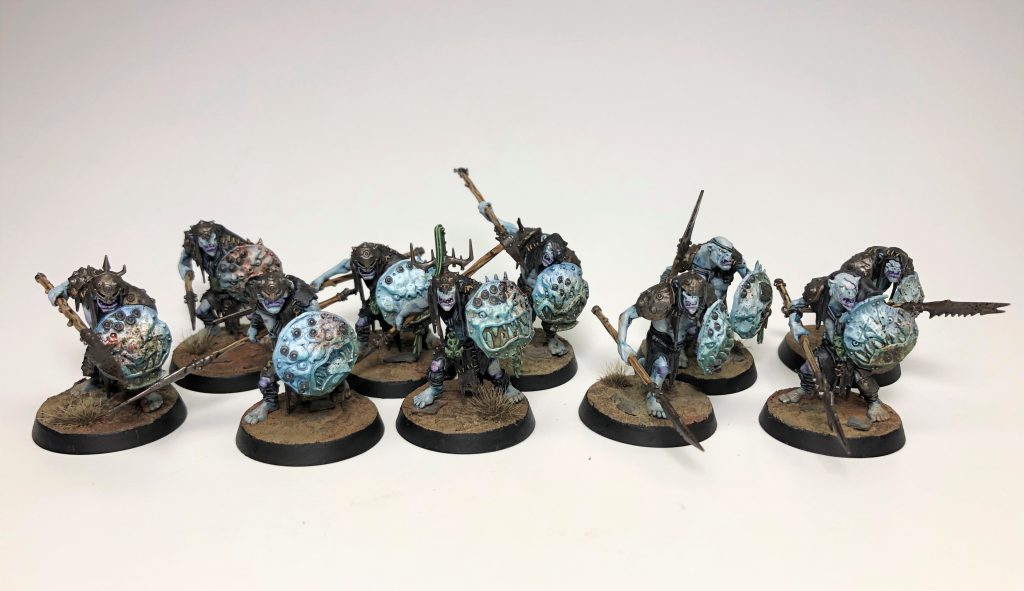 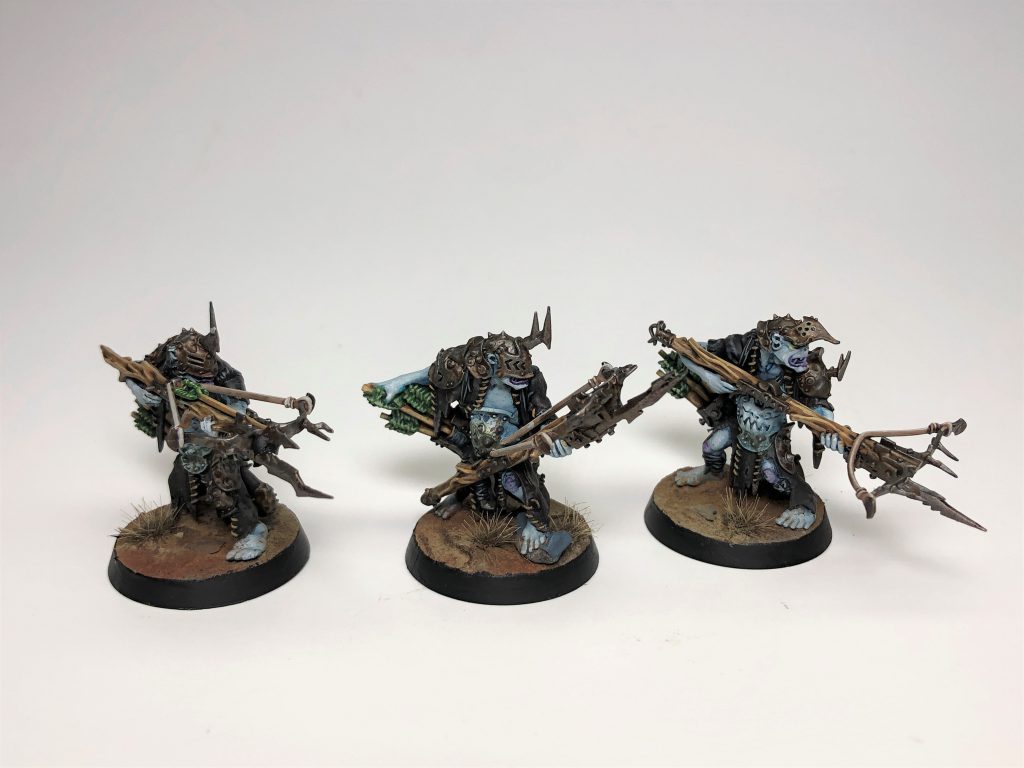 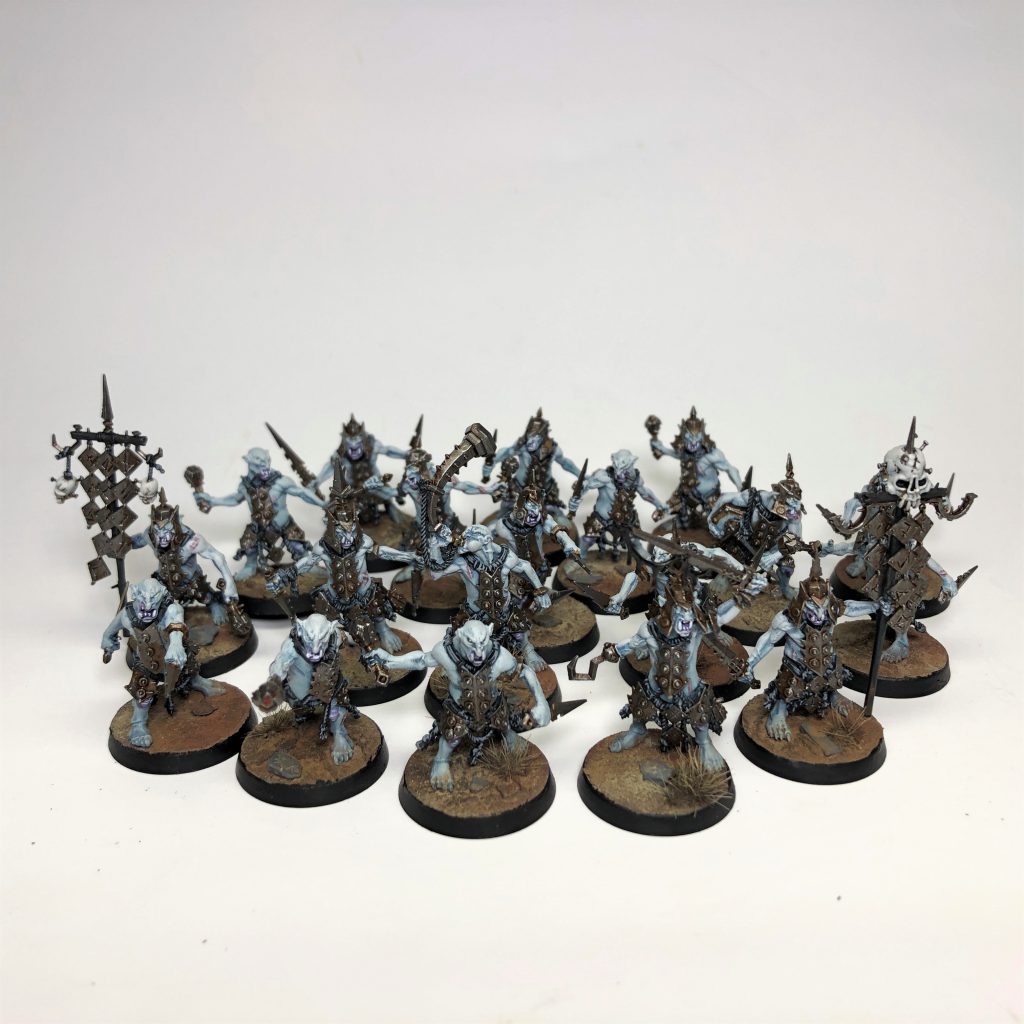 And the Stormcast Eternals (Stormhost TBD): 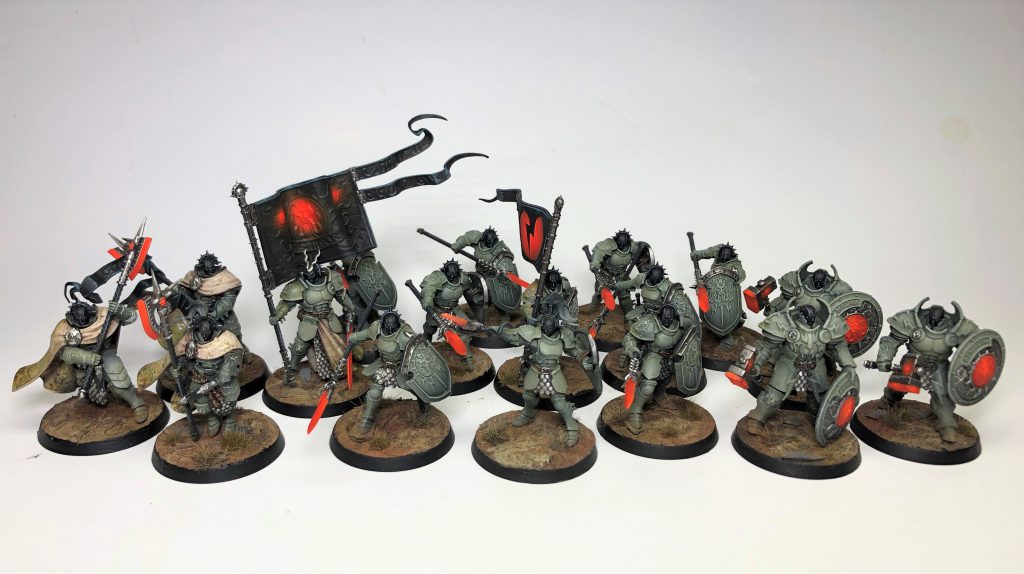 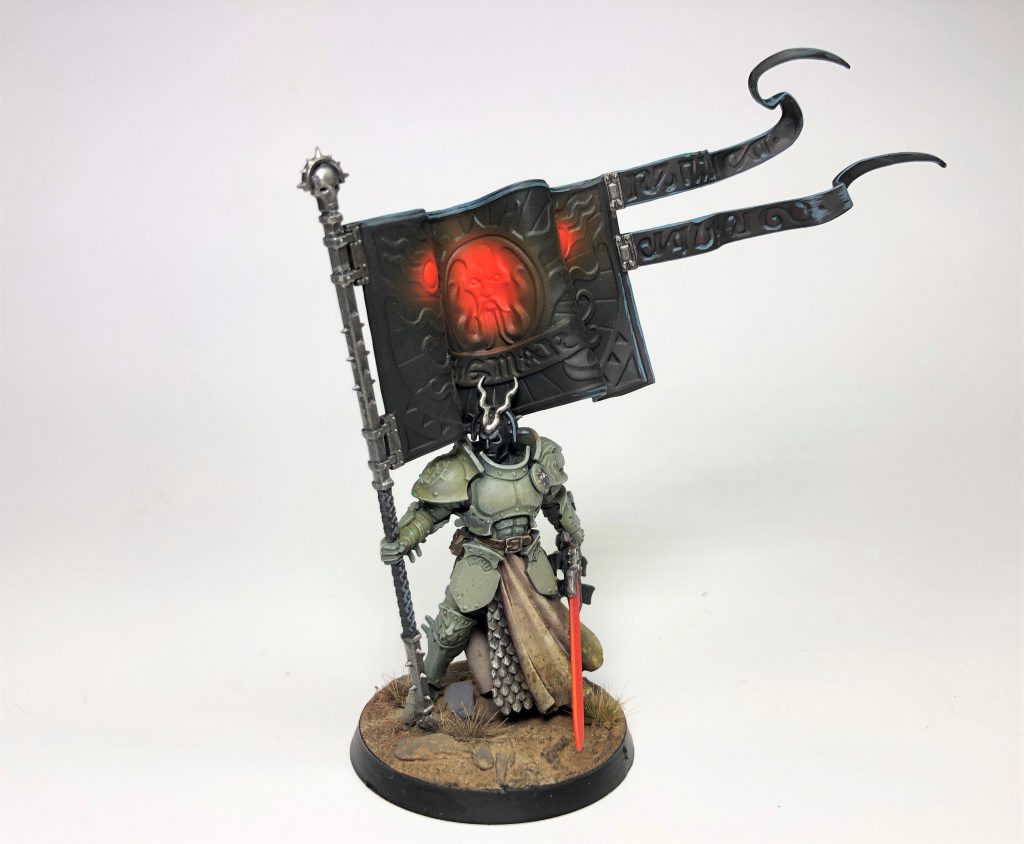 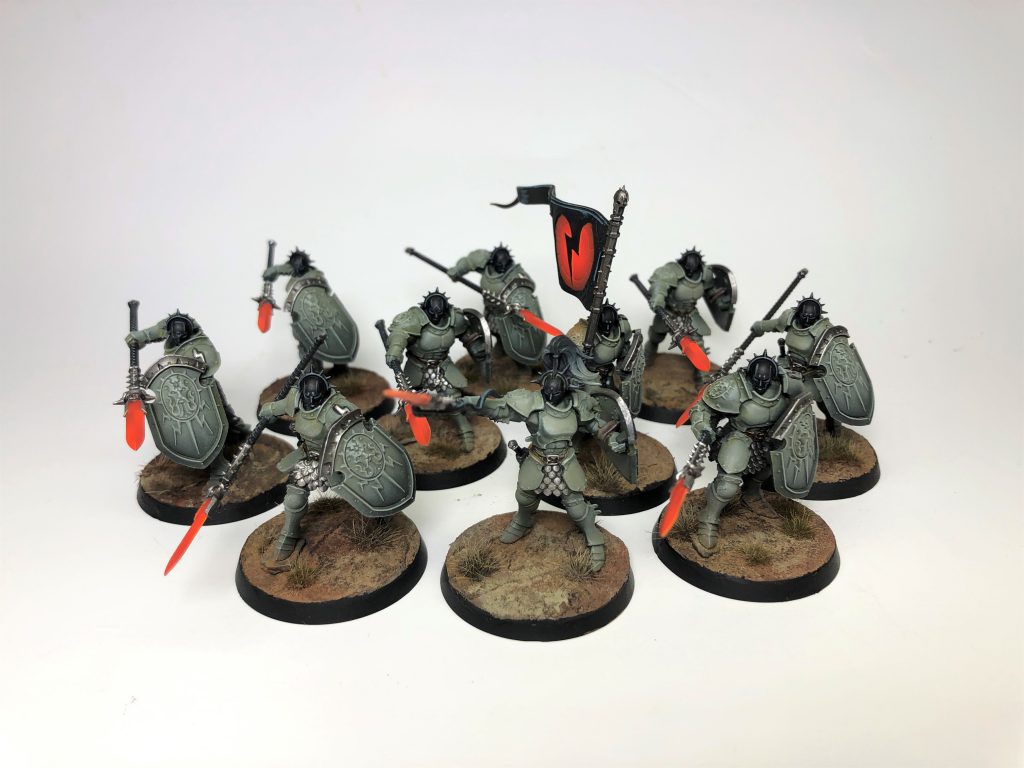 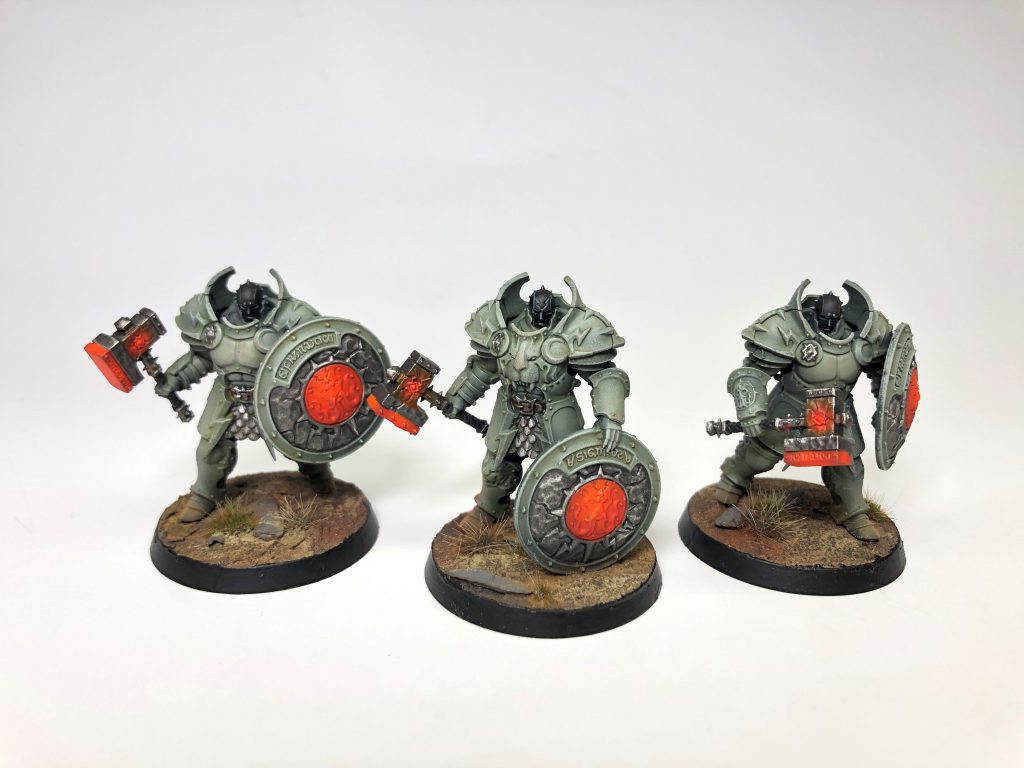 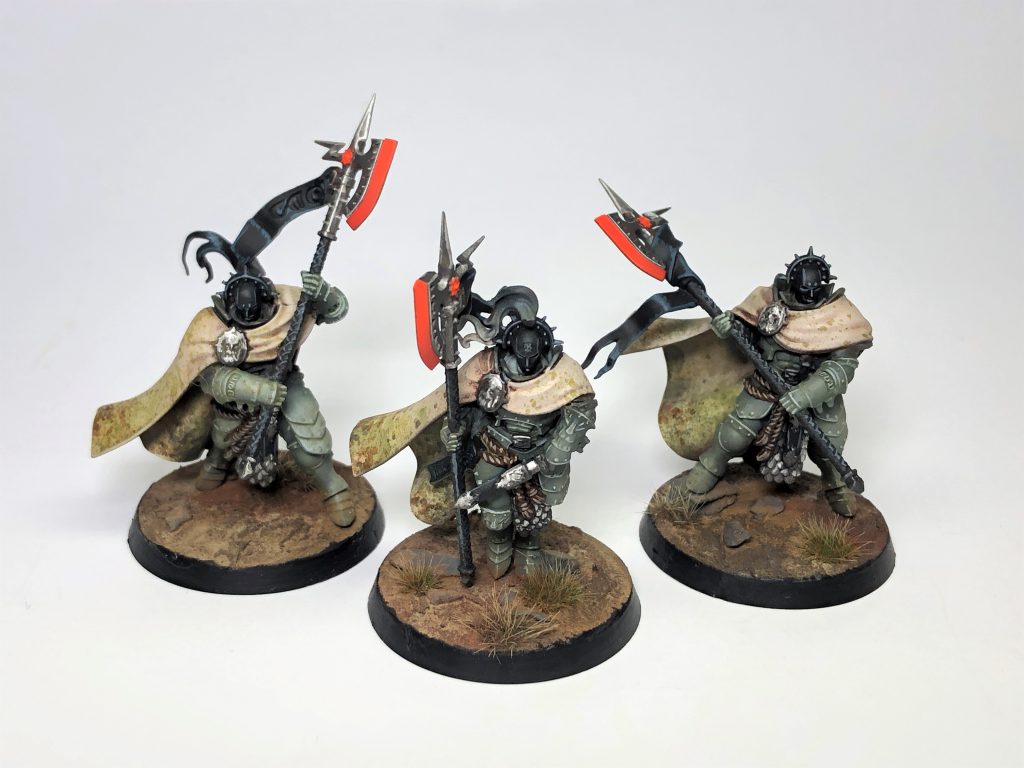 Just a weeks worth of stuff from me this time, starting with a Dunecrawler! 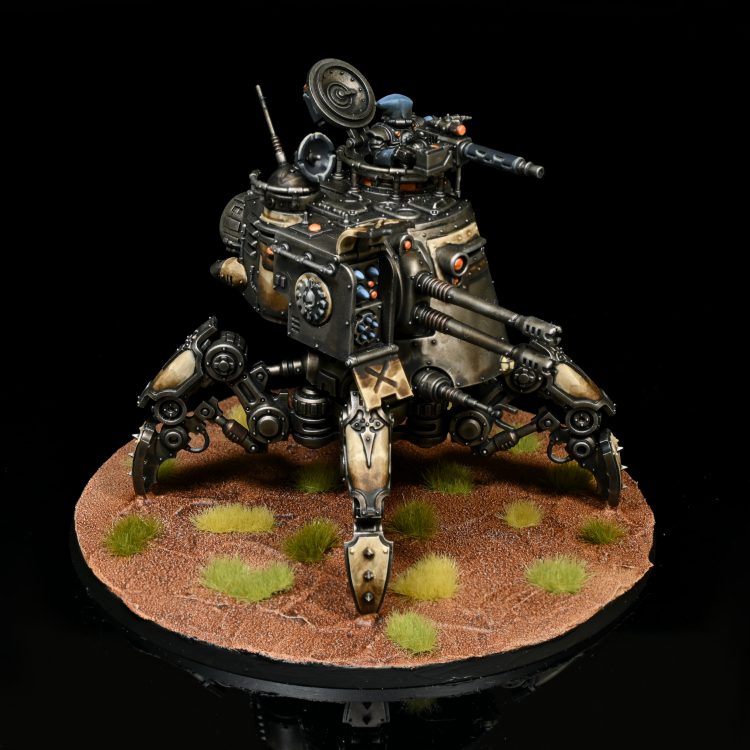 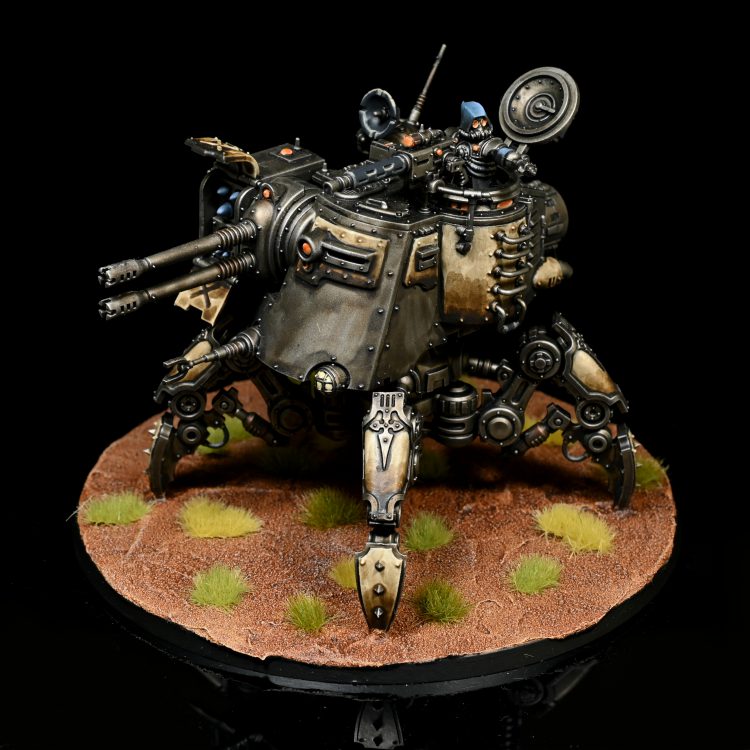 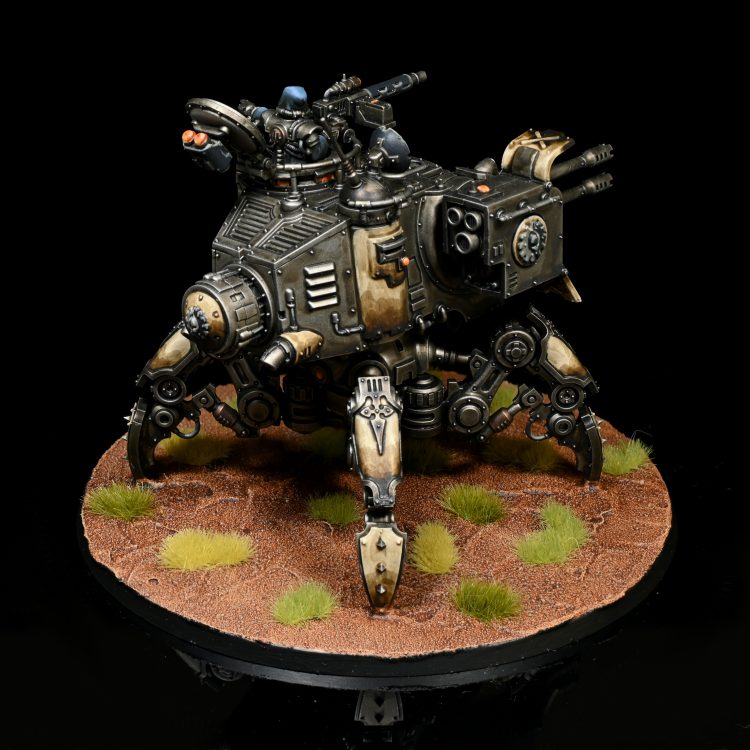 These are actually pretty fun to paint models! After having done two I can officially conclude the worst bit is base coating the panel behind the ladder, beyond that they have a nice balance of details to them.

I also finished off another backlog! 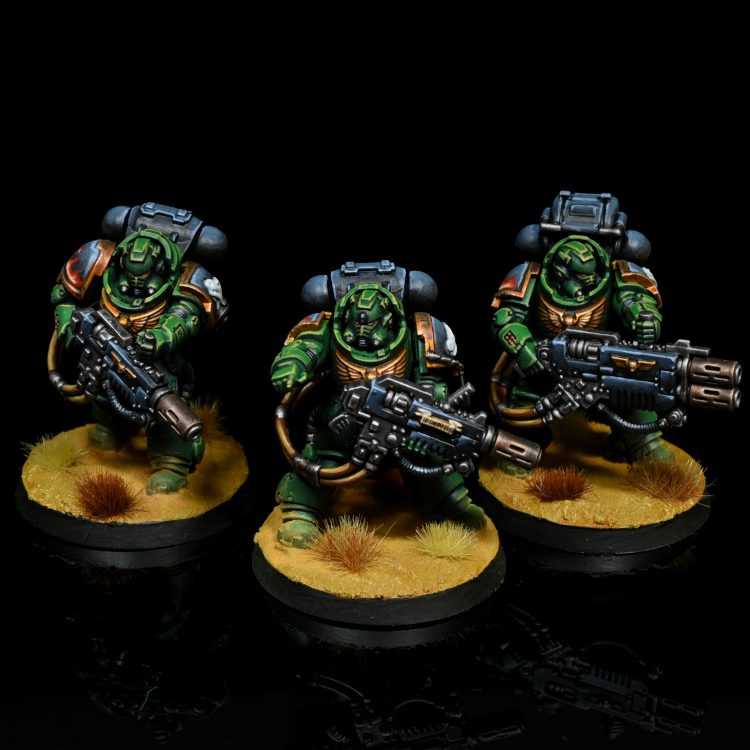 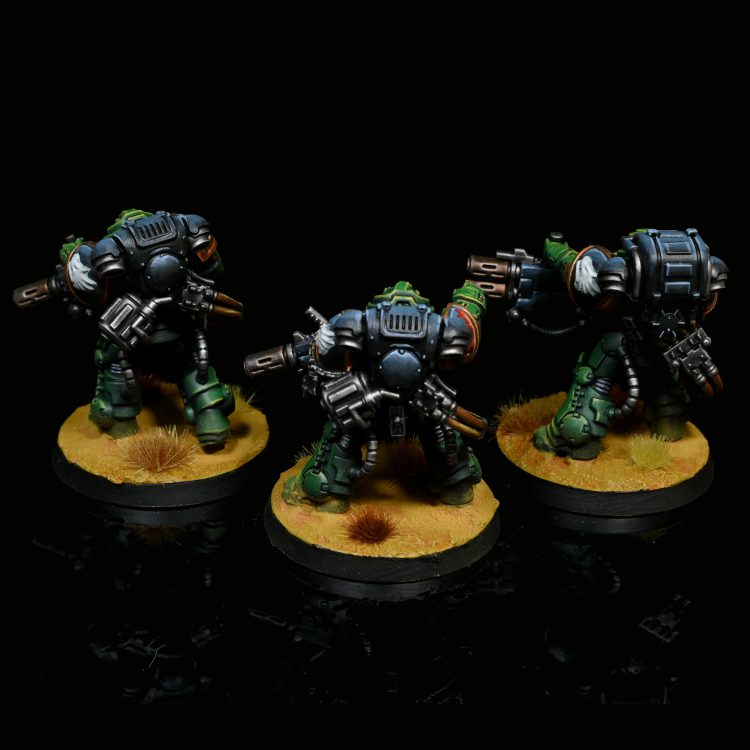 These fellows have been sitting on sprue under my bed for a while, so it was nice to get them done. They are surprisingly exhausting models, pretty detail dense and getting them crisp is time consuming too.

Finally for this time, I got back to painting CWE with a warwalker! 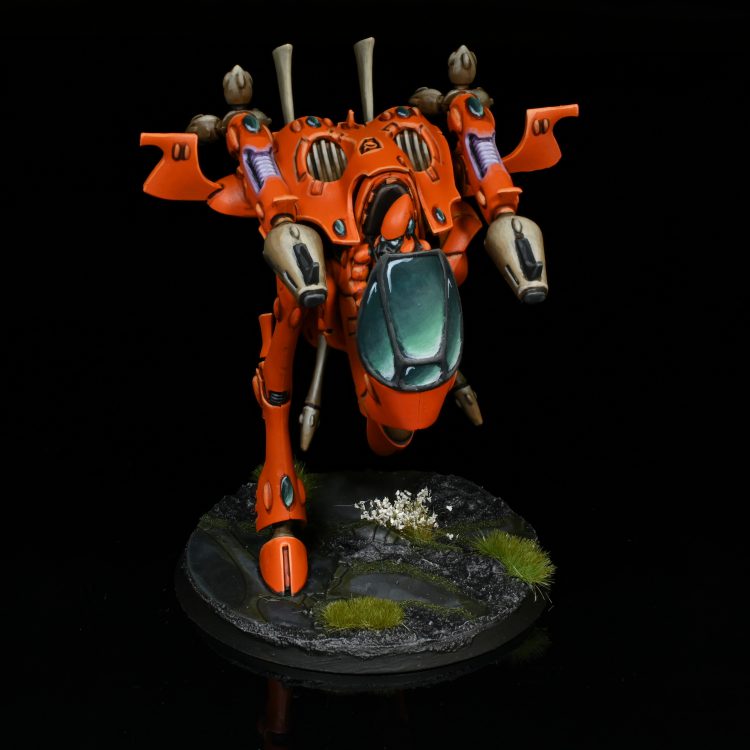 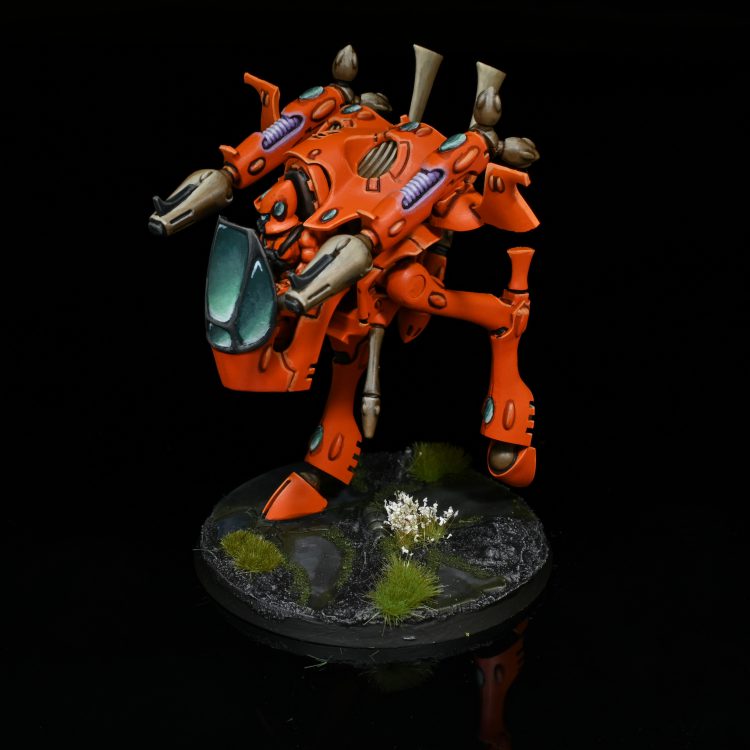 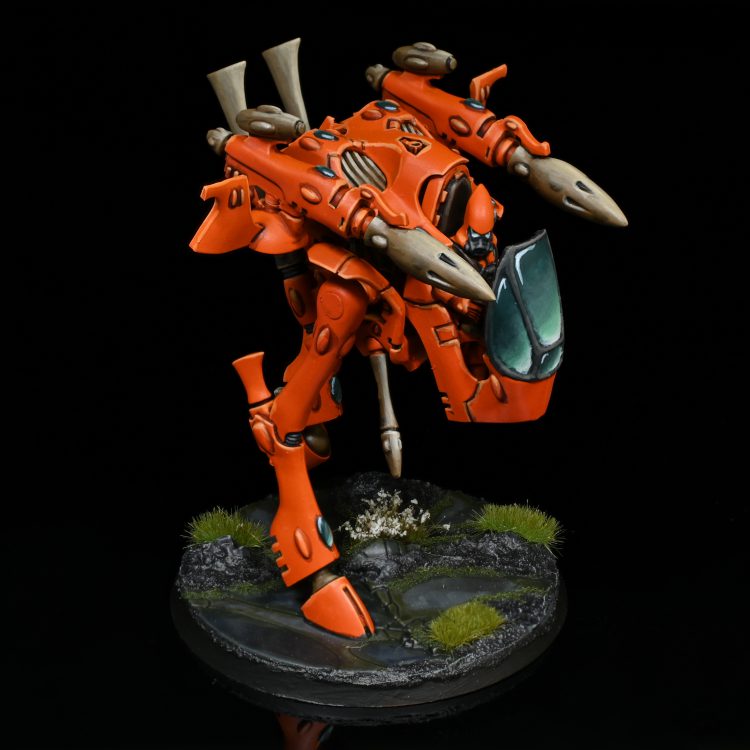 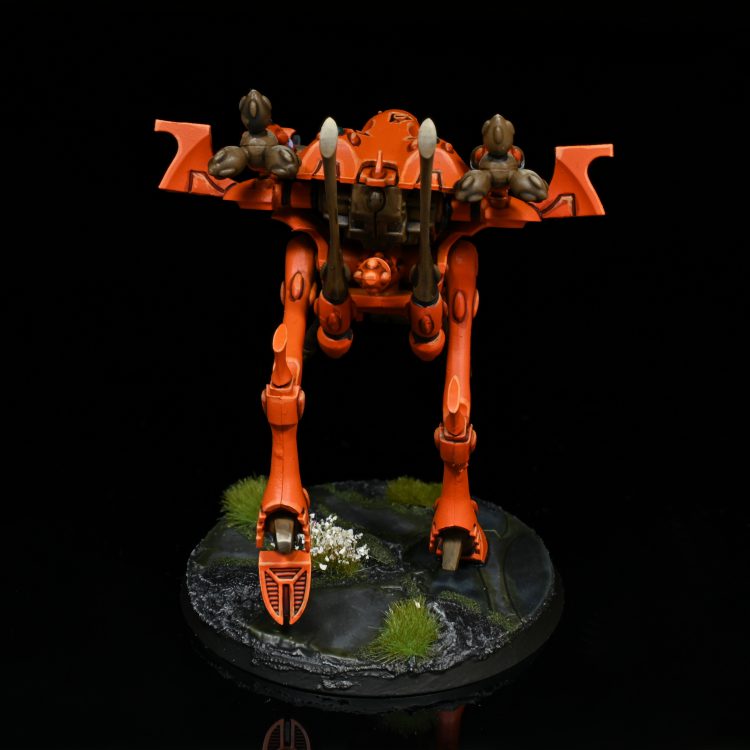 I magnitized this one, I figured that I could leave half the mount on the weapon to keep indexing so the weapons don’t wobble around and it seems to have worked out! it impacts the looks a bit I will admit, but its relatively low profile. I have only done a couple of weapon options so far, this is mostly because I find doing a bunch of options at one time draining but I am doing another two with a wraith lord soon.