We thought we were done this week after Monday’s round of FAQ updates but today Games Workshop pushed out a few more FAQ updates with important changes that have a major effect on 9th edition armies. There’s a lot to cover but as always, Goonhammer’s got you covered with not just a rundown of the changes, but also how they affect the games you’ll play.

One important thing to say at the start here – we want to thank GW for how quickly they’ve turned this additional set of changes around. While the first set this week covered a lot of our questions, there were a few key ones unanswered – and those have been tidied up with this new set. In addition, it appeared that the change to character targeting had a disproportionate effect on some factions, and being responsive to feedback from the wider community on this is a great sign for the care that’s being put into getting these decisions right for 9th.

If you’re looking for the full details, you can find the FAQs on Warhammer Community, here: https://www.warhammer-community.com/faqs/#warhammer-40000 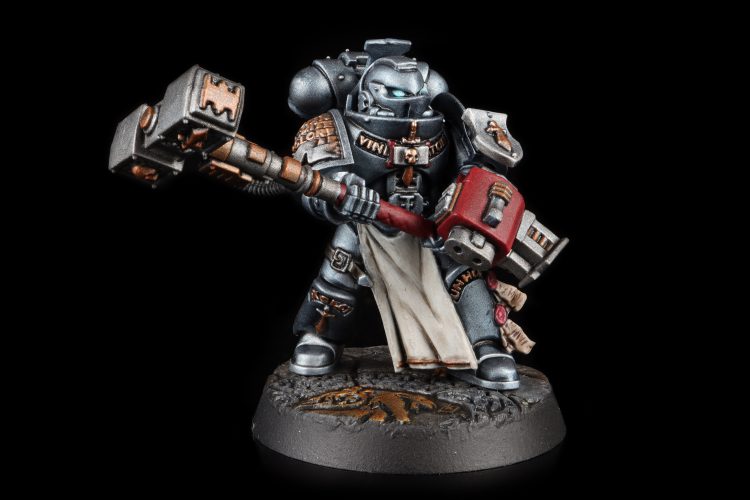 Confirming what most people had accepted by now, Thousand Sons and Grey Knights get a clarification making it clear that yes, really, the exemption to Psychic Focus for units with Brotherhood of Psykers and Brotherhood of Sorcerers are gone in 9th, and intentionally so. This is a major blow to both factions, particularly Thousand Sons, who rely much more heavily on multiple casts of Smite per turn (and get a built-in boost to casting range rather than a cast bonus like the Knights of Titan), though they do still have some nice toys from Ritual of the Damned to play with. Grey Knights will probably get by OK with their other tricks. Both of our Faction Focuses were written assuming this was the case, so go have a look at those if you’re wondering where to go next (Grey Knights, Thousand Sons).

Psychic Awakening: Saga of the Beast 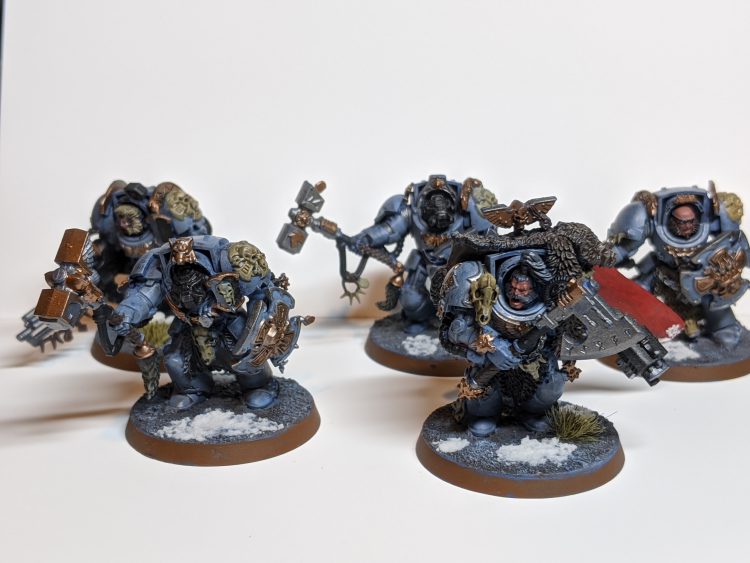 We’ll start with the biggest change: Space Wolves no longer have army-wide Objective Secured. Space Wolves detachments now grant the Hunters Unleashed ability to all non-Beast, non-Servitor units and only Troops gain the Defenders of Humanity rule. Our long global nightmare of “Objective Secured Wulfen, Impulsors, and Rhinos” is now over.

Jon Kilcullen’s Note: Good. Space Wolves didn’t need this to win anyways and now I can stop arguing with people about it.

Finally, the Da Pincha relic now changes the attacker’s WS to 2+ rather than adding 3 to the hit roll, fixing an issue that it had under the 9th edition rules that made its single attack mode worthless.

Now for the really meaty changes. There’s a lot here that addresses issues we’ve had all along, plus some new issues that cropped up after Monday’s round of FAQs were released.

Changes to Look Out, Sir and Targeting 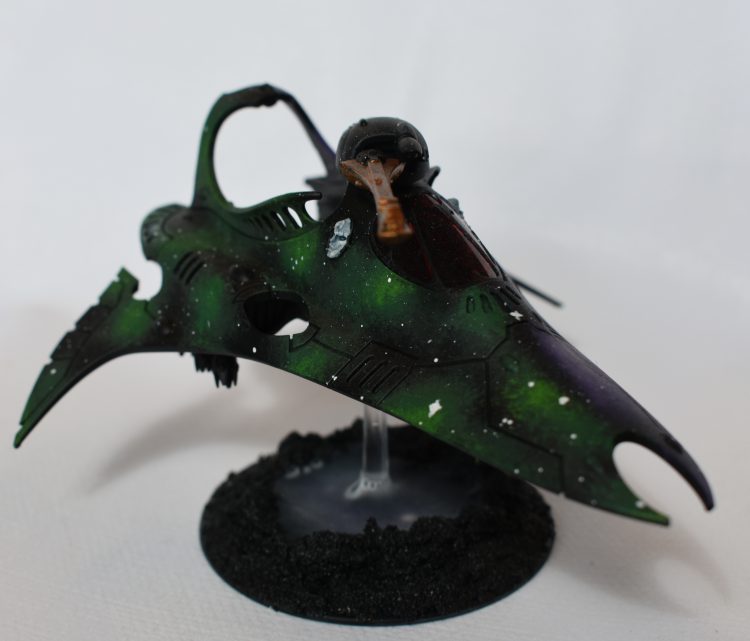 After a devastating change to Look Out, Sir for many armies was published on Monday, we’ve got a revised version of the rule that now affords protection to a character with 9 or fewer wounds if any of the following are within 3″:

As before, units with a CHARACTER with 9 or fewer wounds are ignored for the purposes of determining if another CHARACTER you’re trying to target is the closest to the firing model.

This is a large and welcome change that immediately helps Harlequins, Orks, Dark Angels and Tyranids a great deal, and just makes much more sense overall. It also successfully tidies up one of the remaining exploits you could pull off using units like GSC Patriarchs, who are CHARACTERS that can bring along minions to get up to three models.

This brings us to a pretty much bulletproof version of this rule, which should be robust going forward, and is huge relief for Harlequin players in particular. Pour one out for Corrode, who managed to play a game with them in the small window where the previous change was active, and for Wings who has to immediately go and fix the Ork Faction Focus.

Notes on Obscuring and Dense Cover

Our biggest remaining questions coming out of the monday FAQ related to Dense and Obscuring terrain, and we’re thrilled that GW has acted to put these to bed (Kais is updating Ruleshammer as we speak). 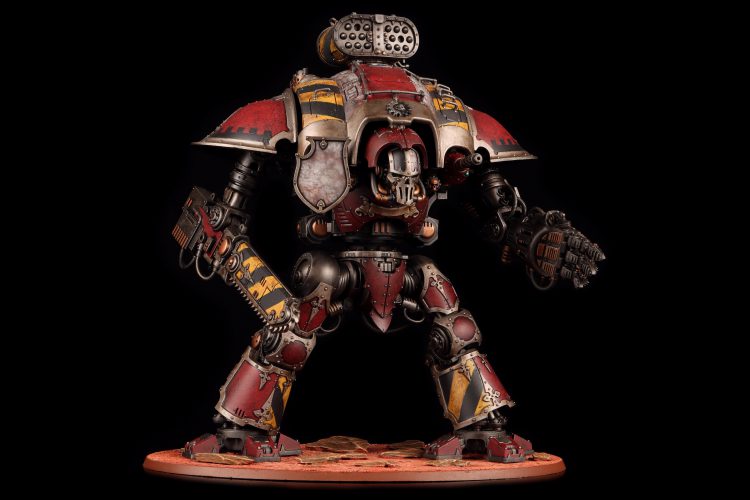 First up, the disparity between the bullet points and printed text for the effects of Obscuring terrain on models with 18+ wounds and AIRCRAFT is cleared up. They do not override standard Line of Sight requirements, so if these models are physically hidden from view by the terrain piece they still cannot be targeted. Essentially, the statement that they “are visible” only applies to the special effects of Obscuring terrain, meaning they can still be seen through windows or other openings, but can’t be seen through a solid wall.

This is a good change, and everyone with windowless NOVA Ls can now rejoice as those can be given the Obscuring trait now without ruining their purpose. We were reasonably confident this was the intent, and we’re glad this option has been chosen, as it’s certainly the more intuitive one. It’s also a reasonable buff for both Knights and Aircraft, as they’re now actually able to hide again on some tables!

The more interesting one here, where we weren’t quite sure which way things would go, is Dense Cover. As written, it was unclear whether the hit penalty confered by this was strictly “Benefit of Cover”, and thus whether it could only be claimed by INFANTRY, SWARMS and BEASTS in most cases. The wording on the rule implies that it wasn’t, but Rare Rules implied otherwise.

The clarification here is that Dense does not need you to be able to claim the benefit of cover for the rule to apply, and thus applies to all units other than the exceptions listed in the rule. That means even tanks can claim -1 to hit from this kind of terrain when it’s between them and the firing model (with some exceptions as carved out in the rule, notably 18w+ models and AIRCRAFT). Dense does still count as a “Benefit of Cover” for the purposes of abilities that blanket ignore them, or ones that specifically ignore penalties to hit rolls created by them.

This one has a reasonably large impact on the game when Dense Cover is on the table, as it means that larger units are going to be partially obscured by it quite a lot of the time. This makes sense in the context of the pre-release discussions about Terrain having a much larger impact on the game, and is going to provide a route to protect yourself against alpha strikes no matter what kind of unit you like to field. This is great news for go-wide vehicle and biker lists, and in combination with the change to Heavy Cover on Monday should really help terrain feel noticably more impactful than in 8th.

There is one minor remaining question here. The FAQ makes it clear what happens when terrain is “between” the firing model and the target, but it doesn’t quite clarify how that “between” applies to models that are partially within area terrain, as the language in the FAQ and comparison to Obscuring seems to slightly clash with the original wording of Dense. Let’s visualise that – here are some beasts and tanks variously interacting with a stylish bit of Dense terrain, and a heroic Dark Angel planning to shoot them. 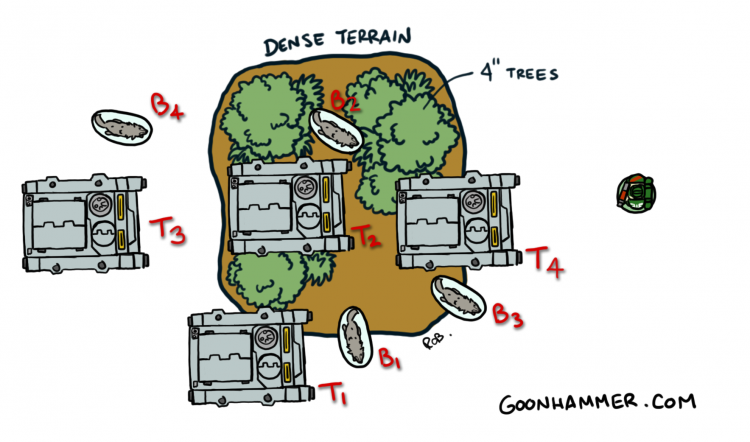 For almost all of these the intent and rules now feel very clear. For all the tanks and beasts except T4 and B3 there’s clearly terrain “between” the firing model and them in some meaningingful way.

The oddity comes when we hit T4 and B3. Here there’s no terrain “between” the firing model and the target, and it definitely doesn’t “feel” right for the tank right in front of the Dark Angel with its nose out to be obscured. However, if we refer back to the original wording of Dense, the requirement for a target not to get the benefit is for you to be able to draw a line to all parts of its base/hull without going through the terrain. 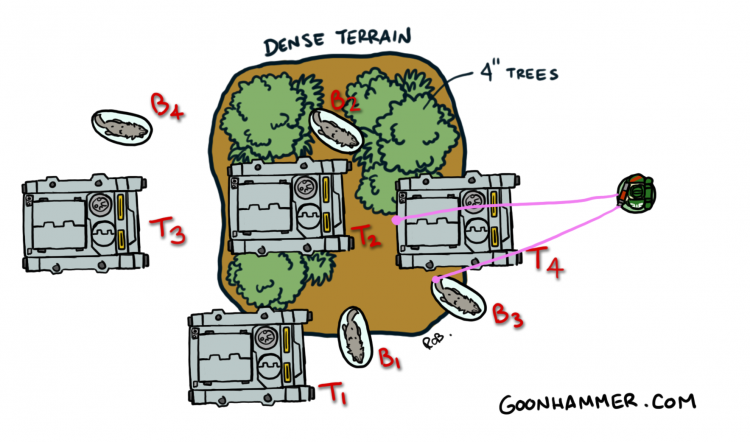 Obviously there are lines to the back of the tank here that do cross it, generating the counter-intuitive possibility that T4 does benefit. Here half the vehicle is in, so you could maybe argue it makes sense, but it would still be true if the tiniest corner was inside, which starts to look more ridiculous.

However, if we go down that road, what happens to B3, as part of its base is similarly exposed? Well – Dense is still a benefit of cover for some purposes – so can it now claim it by dint of being eligible for Area Terrain cover normally, even though the FAQ says you don’t need to be eligible?

That basically gives us our two outstanding questions here:

We appreciate that at this point this is nitpicking – but with events starting up, it would be great to have a fully consistent understanding of how these rules work, as there’s nothing worse than finding out part way through the game that you and your opponent don’t agree on something this important! 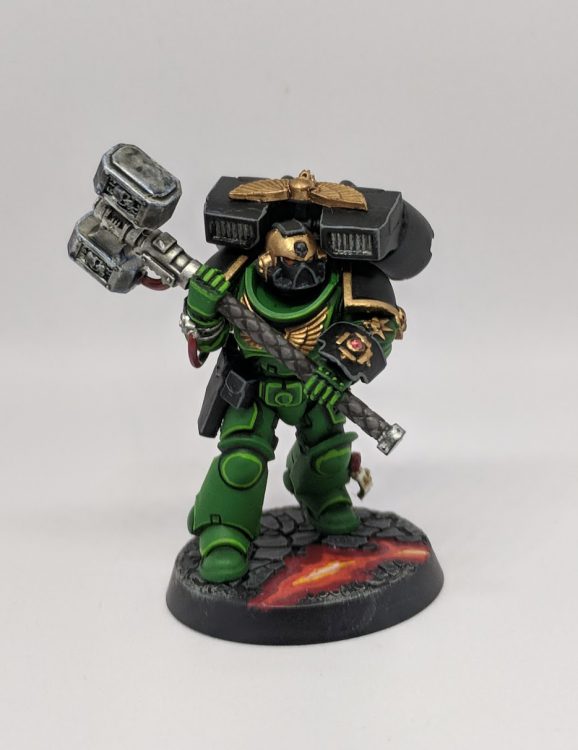 Something that we’ve pointed out in Ruleshammer previously was that having FLY did not appear to allow units to ignore Engagement Ranges for enemy models in the Charge phase, preventing units with FLY from jumping over screening units without also charging them. This was also something that got messed up on rules that were like – but not exactly- FLY, and has now been corrected.

This is an excellent change, and a case where the blanket fix was the right call – it immediately gets Harlequins, Wraiths and the like back into operation as well as sorting out flying charges. It’s also good future proofing – no more when a new ability worded like this lands will we have to try and decide whether to failing to mention engagement range matters. 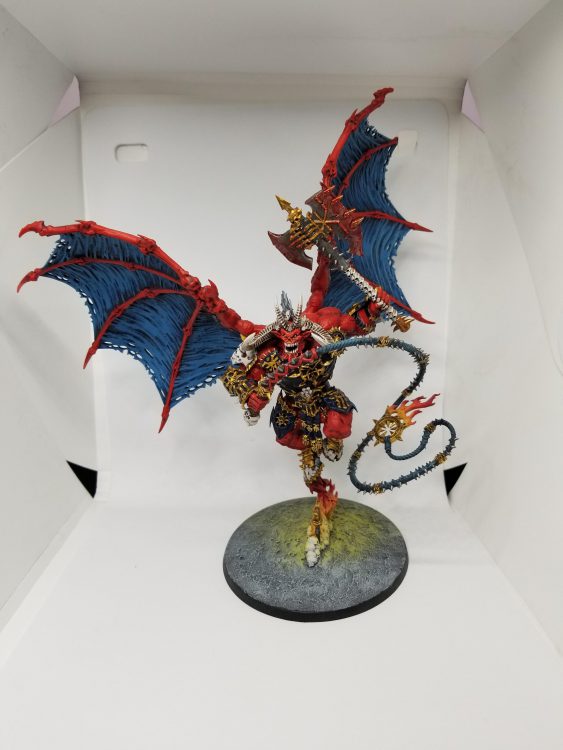 If a unit has an ability that prevents it from losing more than a specified number of wounds in a phase or turn takes wounds from a weapon with a rule that says enemy models cannot use rules to ignore wounds lost from it, the weapon’s rule takes precedence, even if the target has already lost the maximum number of wounds it can lose in a phase or turn. Currently the only models with such abilities are Ghazghkull and Exalted Bloodthirsters, and we’re not aware of any weapon that has this rule to prevent wounds from being ignored. This seems like ominous foreshadowing of a new Space Marines weapon designed to kill other factions’ nice things… but maybe we’re just being paranoid.

We’re pretty happy with these adjustments and where they leave 9th edition at the moment. They shore up some of the biggest issues with the rules and make things more intuitive and fun overall. We’re glad that Games Workshop is on top of some of these issues and addressing them with the speed necessary, and have been impressed with their dedication to pushing out improvements in 9th edition.