It’s August 10th and as promised, Games Workshop updated the Warhammer 40,000 app (well, the Android version anyways) and published a PDF with new PL values for all of the game’s units. While normally competitive games use points instead of Power Levels, these changes still have far-reaching consequences beyond casual play and Crusade: Several rules in competitive 40k, such as the new Strategic Reserves rule, the Daemonic Ritual Summoning rules for Daemons, and some stratagems all use Power Level as a factor.

So what changed and how big a deal is it? We dove into the app this morning to find out and summarize the biggest impacts. For the most part, Power Levels changed to be in-line with the current points costs of units, though there were a few areas where it seems like strategic decisions have been made with Strategic Reserves costs in mind.

Note that we aren’t going to cover every faction and unit here. Mostly because not all of them matter – Power Levels really only matter in Matched Play for some units and we’re mostly interested in either those units or how they affect units being put into Reserves. If you’re looking for the full list of Power Levels, you can find them here.

Sisters of Battle have a fairly recent codex, so their point changes are primarily just slight inflation, with 1 PL increases here and there. A few of them have some impacts if you’re actually playing with PL.

For points players there’s not too much changed. A few Reserves packages either cost you more or get less effective. If you’re thinking of playing with PL, the main takeaway is that minimum squads didn’t get more expensive, but 10 model squads did and you’re probably joining points players in MSU land.

Bikes, vehicles and heavy units appeared to take an increase, as did more popular infantry units.  Other units which are not so popular got reductions. The only real exceptions are Tactical Marines and Reivers, which are neither popular and got a PL increase.  To me, it looks like they gave vehicles an across-the-board power level increase, and raised the PL of the Repulsor Executioner enough to make it prohibitively expensive to bring in smaller games.

The one interesting bit to me is the changes to the Sicaran tanks. These are now substantially cheaper in power level, and now in the heavy support category instead of the inexplicable elite category they were in 8th edition.  As the PL changes are now published as an FAQ, I think we can safely say that they are all Heavy Support.  This prevents them from getting to use Servitors to cheaply and easily unlock them, however.  However, for some reason, GW only changed the role of the regular, Punisher, and Venator Sicaran in the App.  The Sicaran Arcus and Sicaran Omega tanks are still elites per the App, but received PL decreases.

The changes here are minor. Adeptus Custodes mostly received point drops that bring them in line with the new points in the 9th edition Munitorum Field Manual. None of the changes here are too important in points based play because they’re on units that either natively deep strike or will want to start on the board, but they’ll matter in Crusades that use PL.

Admech almost universally went down in PL. This is somewhat expected, as their point costs have also been drastically reduced since the codex was published. Big winners were Admech troops, with all troop choices dropping points. Sicarian Infiltrators and Servitors dropped in half

The big concerns with Astra Militarum are going to be around putting units into Strategic Reserves. The faction’s major Troop choices – Infantry Squads and Militarum Tempestus Scions – were unchanged, so that leaves tanks to talk about, and most of those either didn’t change or didn’t change enough to matter. There are only two changes that immediately jump out when looking at the Imperial Guard:

Most of the Grey Knights’ non-vehicles have the Teleport Strike ability, preventing them from using Strategic Reserves and others can be put into a teleportarium for 1 CP with the Teleportarium Stratagem, so this PL update isn’t the biggest deal for them. Purifier Squads don’t have this ability however, and went down by 2 PL (from 9), while Purgation Squads also held firm. The Nemesis Dreadknight also came down to 9 PL from 11, making it cheaper to put into Strategic Reserves.

Imperial Knights saw a few minor adjustments, but none that have an immediate impact on their cost to be put into Strategic Reserves.

One of the factions most impacted by any shifts in PL values is Chaos Daemons – both summoning and the Denizens of the Warp Stratagem rely on units’ Power Levels to determine the difficulty/cost of use. The big thresholds we’re worried about here are at the 8 CP to 9 CP jump, where Denizens starts costing 2 CP, and anything that drops a bigger daemon’s PL lower and closer to 10.5, the average roll on 3D6. The other big thing we’re going to find out is whether there are now units that cost less CP to put in Strategic Reserves than to put into the warp with Denizens. Spoiler: There aren’t, but the drops on

Almost all of the Chaos Knights went up in PL by 2-3, but only one of these changes actually makes a real difference.

For Chaos Space Marines there are a few units we’ll be interested in putting in Strategic Reserves and the changes to Chaos Daemons affect the faction significantly in armies that want to summon daemons.

Death Guard are a slow army, so there’s a real need for Strategic Reserves with them. Any drops here on units with a 4” or 5” Movement value will be helpful. 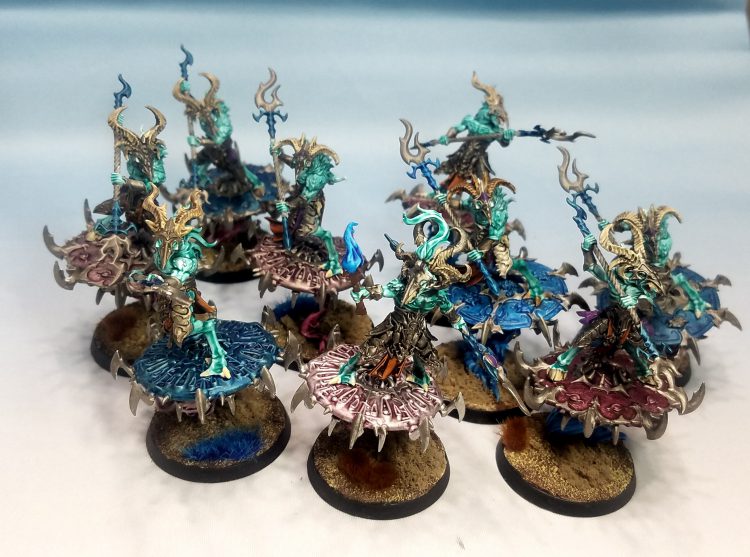 For the Thousand Sons most of our units can either Teleport or be put into the Webway, but there are a few units where PL changes are worth noting and the changes to Daemons may also be important.

Craftworlds already have access to the ability to Deep Strike nearly all their units – only Wraithlords, Knights and the Avatar are lacking the keywords to let them join the battle via either Cloudstrike or Webway Strike. However, because you can only use one of those in each game, it’s theoretically possible that units going over a key breakpoint here might matter.

The possibly relevant changes are:

Strategic Reserves are kind of a “nice to have” add on for the Drukhari, who can already teleport units of any size onto the table for 1 CP or 3 CP to do two units, meaning that using Strategic Reserves will typically require having a second unit of 9 PL or lower to put into Reserves. Those aren’t really in the Drukhari army. The only notable change from the PL update is that Wyches now start at PL 3 and go up to 12, meaning that putting a full-size squad into Strategic Reserves will cost you 2 CP instead of 1, so if you’re going full-size and want to protect/teleport your Wyches in, Webway Portal is the way to do it.

Nothing noteworthy in the PL changes for Harlequins.

Nothing noteworthy here. The Visarch and Yncarne go up by 1 PL each.

A number of units changed, though the most notable adjustment for the T’au is the Stormsurge, which drops from 20 PL to 18 and can now be put into Strategic Reserves for only 2 CP, helping protect it until it can arrive to dish out some pain. This is potentially a major protective boost, though it remains to be seen whether this will be enough to make it worth taking. Broadsides also came down 1 PL per model, making it possible to put a full unit of 3 in reserves for only 2 CP. Given they can now move and fire with no penalty (as they are not INFANTRY), that’s a helpful boost. The Ghostkeel also came down to 9 PL, giving it the ability to outflank for only 1 CP (though deploying it forward is almost always going to be the correct move). On the downside, the Hammerhead went up to 10 PL from 9 and Riptides went up to 15.

Genestealers don’t really get access to the Strategic Reserves rule, thanks to almost every unit in the army having the Cult Ambush rule instead. So the big changes here are mostly for allied Astra Militarum detachments that affect Genestealer Cults via the Brood Brothers rule. There were a few notable changes to Genestealer Cults’ PL otherwise: Atalan Jackals went up 1 PL. Aberrants also went up by 2 PL.

Necrons are another faction that didn’t really need a lot of help from Strategic Reserves, but both of their vehicle-based teleporting options (Monoliths, Night Scythes) are risky and overpriced, so there’s potentially some value in putting a few units into Strategic Reserves.

Boyz are now 4 PL / 7 PL / 12 PL depending on size (+1 for each of the larger size tiers), making them slightly more expensive but not really affecting your costs for Strategic Reserves. Really what we want to talk about here are buggies, bikes, and trukks. Of these, Rukkatrukk Squigbuggies came down 1 to 6 PL, so you can put a full unit of 3 in Strategic Reserves for only 2 CP and Shokkjump Dragstas came down by 1 (to 5 PL each). Warbikers came up slightly, to 16 PL on full-size squads.

The Bonebreaka got a heartbreaking +1 PL increase here, driving it over the dreaded 10 PL threshold and into 2 CP reserves territory. Flash Gitz and Deff Dreads also went up 1 PL each, while Killa Kanz came down to 2 PL / 7 PL / 14 PL depending on size. All of the Ork flyers went up but only the Wazbom Blastajet went up to 10 PL, again putting it in the “2 CP to put in reserves” club.

Some important Tyranids units saw significant changes: The Exocrine came down 2 PL to 9, allowing it to be put into reserves for 1 CP, though generally you’ll want yours on the table double shooting with the Weapon Beast ability. Screamer-Killers went up to 7 PL, so a unit of 3 will now cost 3 CP to outflank. Tyranid Warriors came down 1 PL, while the rest of the Tyranids’ Troops options remained the same.

This is just the start of our examination of this week’s changes and news – we’ve also got a review of the new FAQs and points adjustments coming, so stay tuned for that. And as always if you have any questions or feedback, drop a note in the comments below or email us at contact@goonhammer.com.