Our patrons have been hard at work with a ton of great hobby – so we decided to shared it with all of you!

In the build up to 9th I painted an Inquisitor as I wanted to try them out in some fun rather than competitive lists, and also a Rhino for my Sisters of Battle side project, which for now is on hold while I paint the new hotness. Since 9th came it’s mostly been full tilt on new Marines and some Dreadnoughts to run with them. I’d always wanted some Contemptors as they’re extremely cool and this seemed as good excuse as any when Forge World re-opened to lighten the wallet. Now 9th is here, I blitzed through the Eradicators as I frequently play a friend where we tournament practice as well as the Bladeguard. As someone who enjoys are more beaten up, grubby Marine, this makes it relatively forgiving when speed painting. 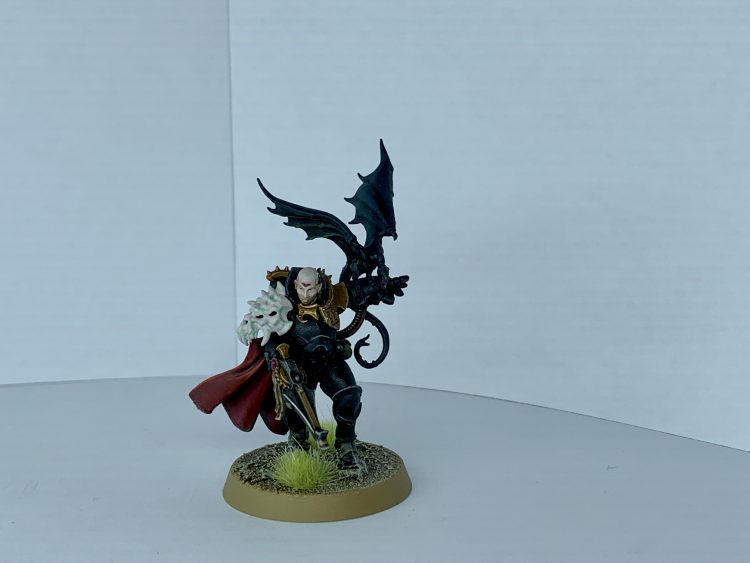 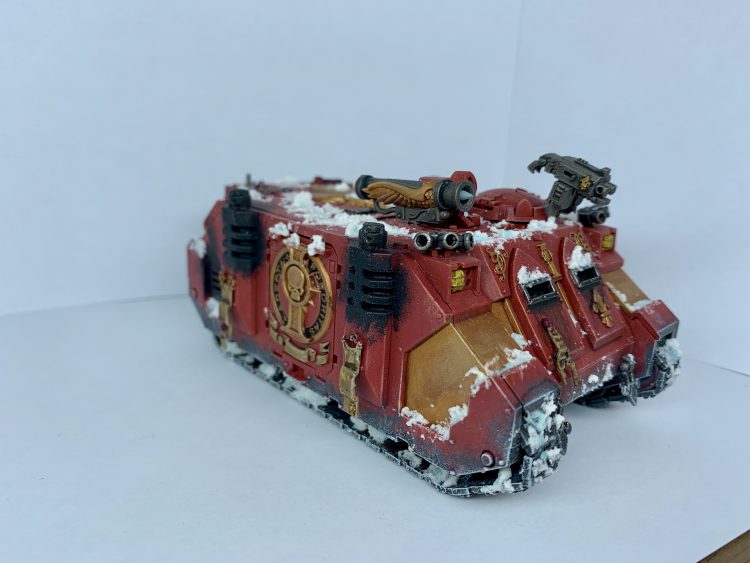 The Terminators were all one tone till I tried making some Match my Titans and realized 2 tone was best. So I repainted like…25 of them. Keeping the Phoenix Guard and the Lords all the same so that they can be told apart easier and for Lore reasons TM The bird is just nonsense and I love it. The Riptide was posed like that for a display board but RIP to AOP this year so now it’s the base for my bird.

For my birthday, I treated myself to a Contemptor Dreadnought.

I used a very basic paint scheme, only a little fancier than what I use on my Intercessors. I primed black, gave it a light hit of a dark gray on top, and then went in to the details. Steel was done with Coat d’Arms Gun Metal, Reaper True Silver, and Vallejo Chrome. I also drybrushed over the corners and bits with some of the Gun Metal to help it look more worn.

I also experimented with the new Citadel colors a bit. The bronze bits were done with Runelord Brass. I didn’t like it at first. It had no real contrast against the steel. But once I hit it with the Skorpekh wash, it really came out. I also used the new Tesseract Glow on the lenses, with a little dab of Contrast Warpstone Green on the upper bits.

In my never-ending quest to try and paint like the grown-ups, I’ve started using pigments for weathering my dudes. I also liberally applied it to the base to help the two blend together.

I tried to smush the grass down where its footsteps had fallen, but I’m not sure it quite came out.

Now, I know what you’re thinking. “Mann! How can that be an Iron Hands dreadnought? It doesn’t have any hands of any metal or alloy!” That’s where my secret weapon comes in.

Magnets. How do they work?

Pretty drat well, as it happens. This will also help if, say, the contemptor stays good but the twin lascannon becomes bad. It’s much cheaper to buy one or two weapons than to buy an entirely new model, after all.

Overall, I’m fairly satisfied. I sometimes struggle to feel like I’m making any real progress on painting, but I do think I’m starting to get better.

Started on the Indomitus boys, I wanted something simple that I could do quickly, so here are the Solar Wardens. I don’t know who they’re a successor chapter of but their tactic is being insufferable edgelords, so it could be anyone!

Knocked these dudes out of my backlog while I was waiting on the Necron half of Indomitus. I really enjoy putting contrasts over metallics, and will try to work some Flayed One flavor into the army.

9th Edition has come out, and although I’ve yet to learn and play a game (any day now I swear!) I’ve been able to finally finish the Sisters of Battle army box and add just a few more sisters to the army to bring it up to a complete 500pt combat patrol that I’m satisfied with.

As I was finishing up these sisters, I also painted a squad of old Ratling models and a scion squad as palette cleansers. I’m not quite sure what to do with the Ratlings, but the scions will definitely go towards a second combat patrol.

I finished my Dreadnought I was working on last month. I also painted up a LT, a unit of Eradicators, and almost finished a unit of Intercessors (not pictured). Getting closer to my 2000 point list!