Welcome back Readers! This is the second half of our King-sized Patron Hobby Roundup, part 1 of which you can find here. As always, thanks to our wonderful Goonhammer Patrons for supporting us, and for being so wonderfully talented. Enough preamble, lets get to the pretty pictures. 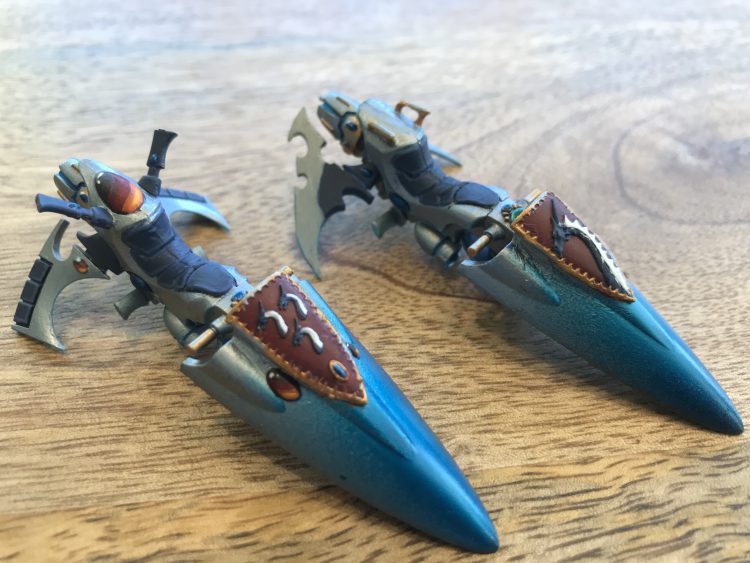 Progress continues on the Knights of Lusyrhael, my fall-era Aeldari ghosts awoken by the Ynnari to serve the Whispering God and mete long-awaited vengeance upon the Ruinous Powers. And anyone else who might take issue with them doing that, for that matter. 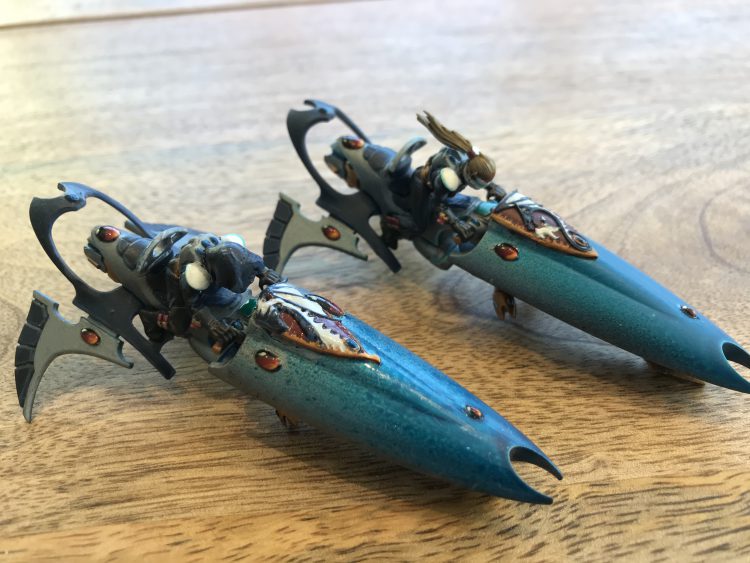 Pilots have been added to the larger finished Dragon Wing jetbikes. Spear-wielding ghosts on the back still pending. 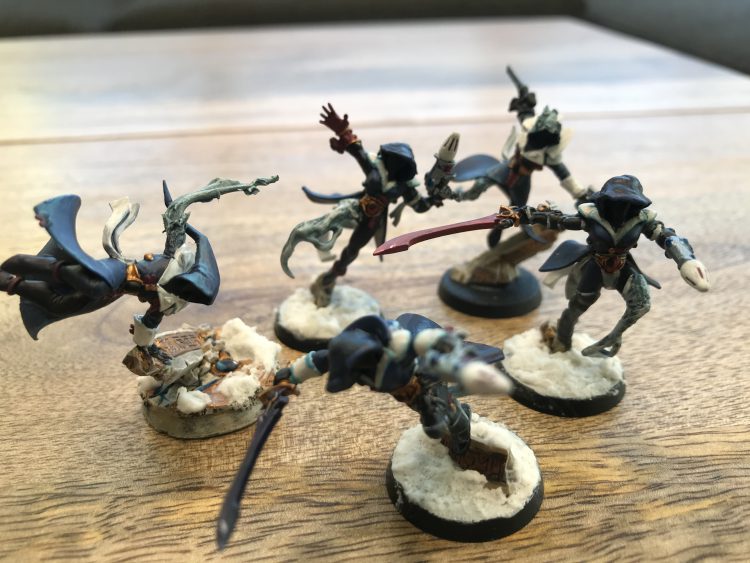 A couple spectral idiots. The left-most one will run as a Solitaire if needs be, otherwise he can just join one of the regular ghost squads. 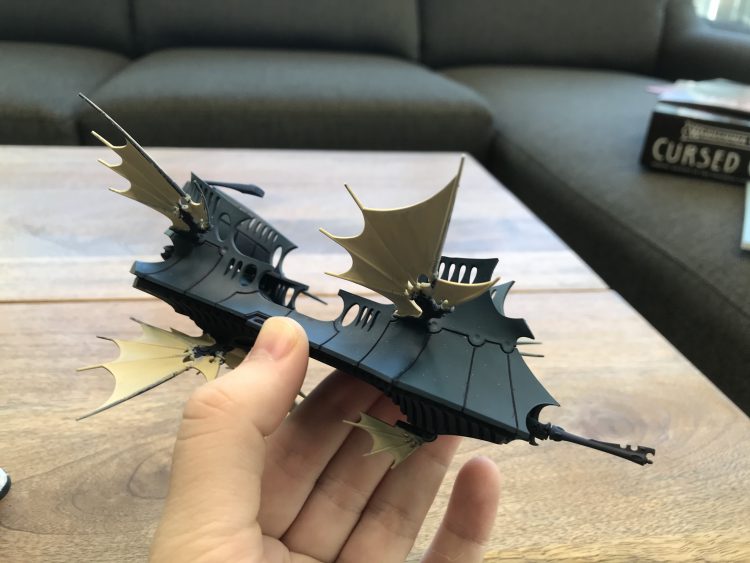 And, finally, the Exodites of the Maiden World of Lerais will take to the battlefield alongside their Ynnari brethren and the spectres long sealed away on their home planet. Work’s begun on this Exodite Sail Barge, because sadly Lerais is a little too chilly to support giant reptilian fauna.

I’m awful at taking photos, but here you go! This is the first squad I ever painted! 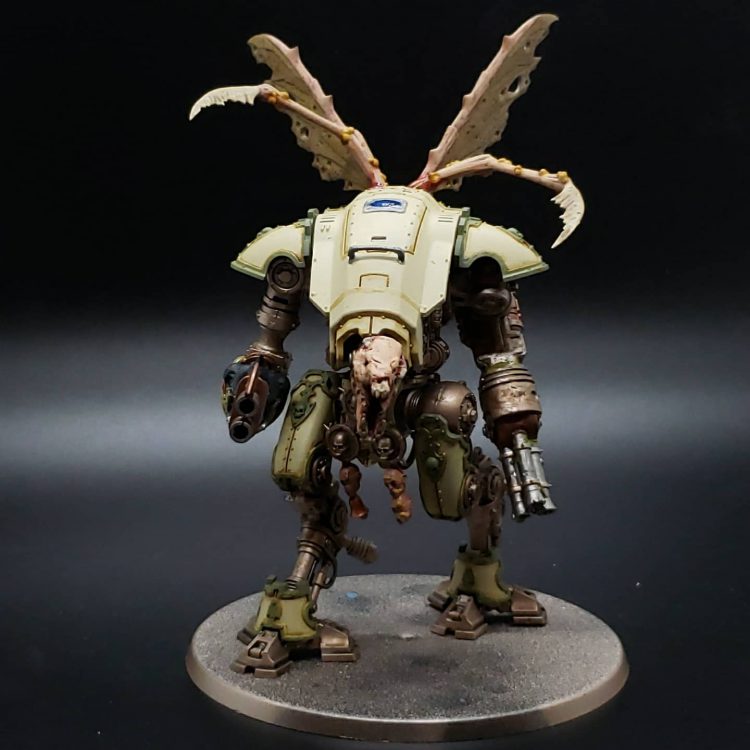 I was working on a project to make every knight in my army a conversion and challenged myself to make 4 war dogs over 3 weeks, these are the results. 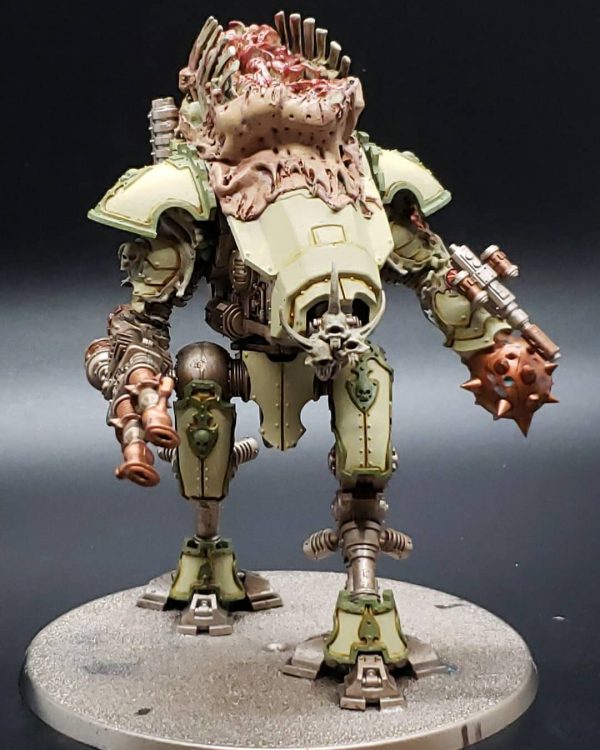 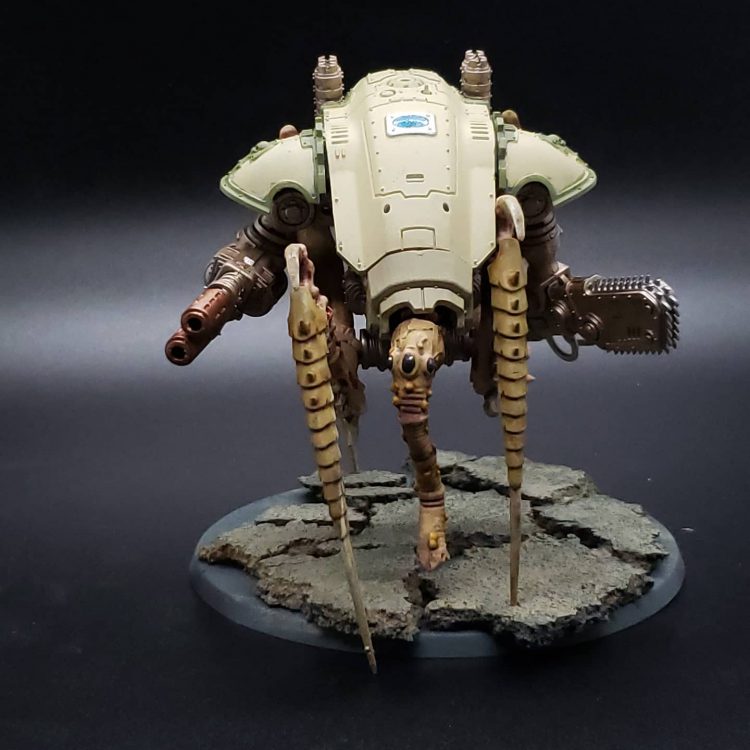 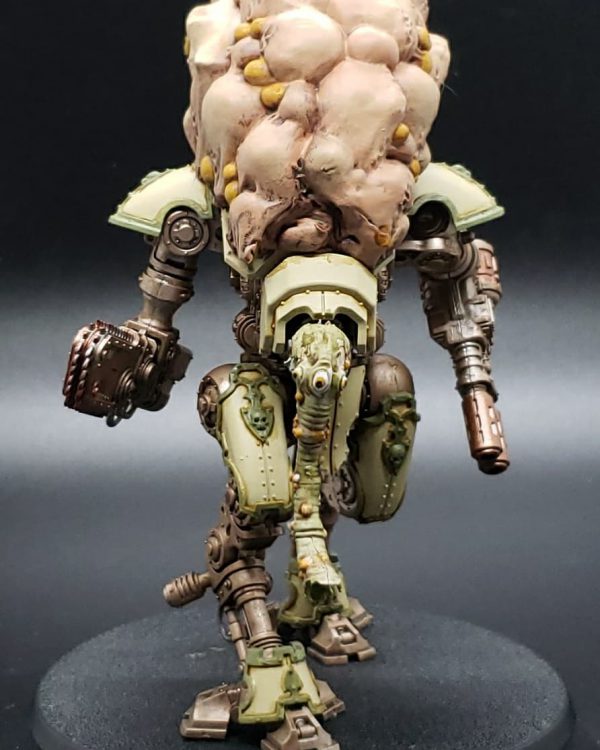 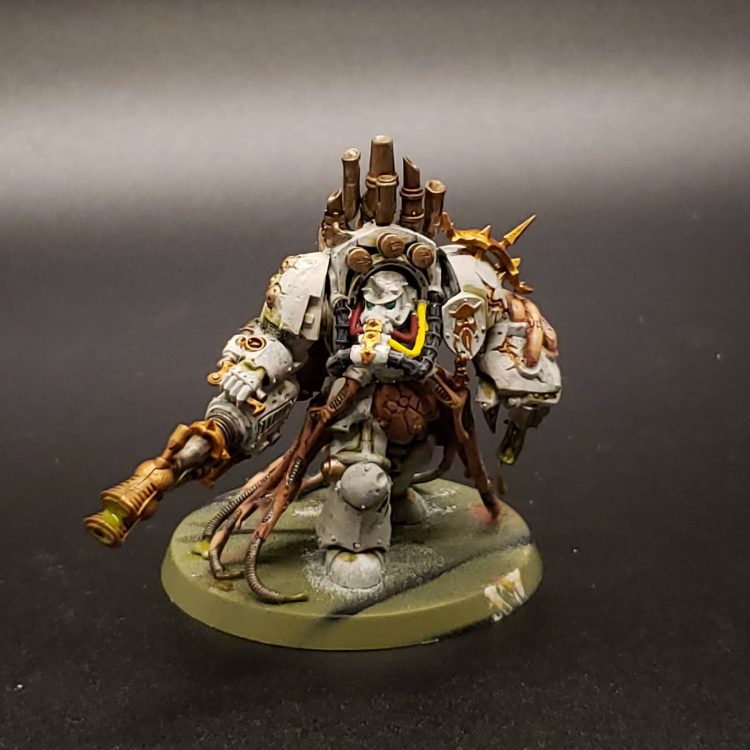 I also threw in a lord of virulence in between after getting a good feel for fleshtones when working on the conversions. 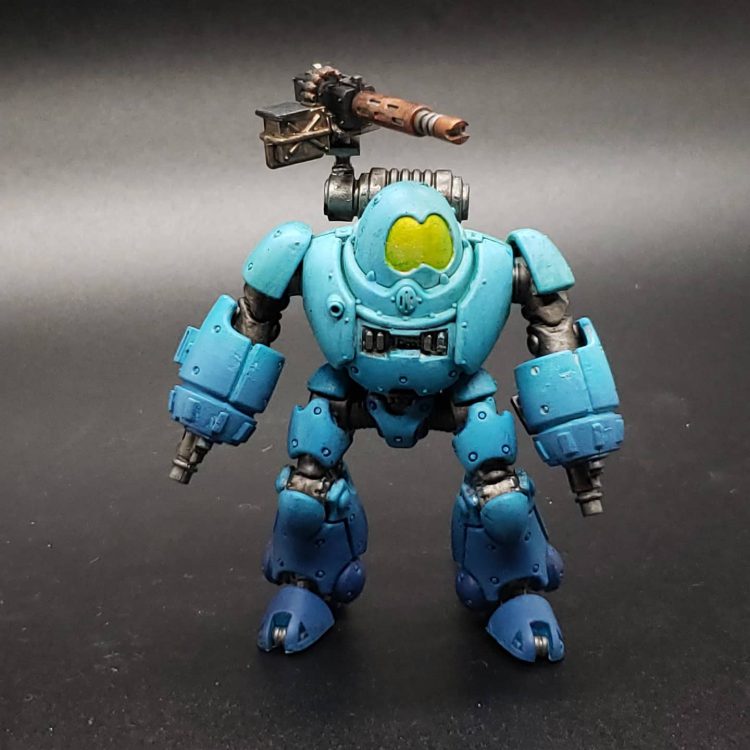 After painting gross stuff for almost a month I decided to try some paint schemes for armies I don’t usually play by buying models for my friends armies. Using that as an excuse I experimented with hand brushed gradients with this blue Kastellan. 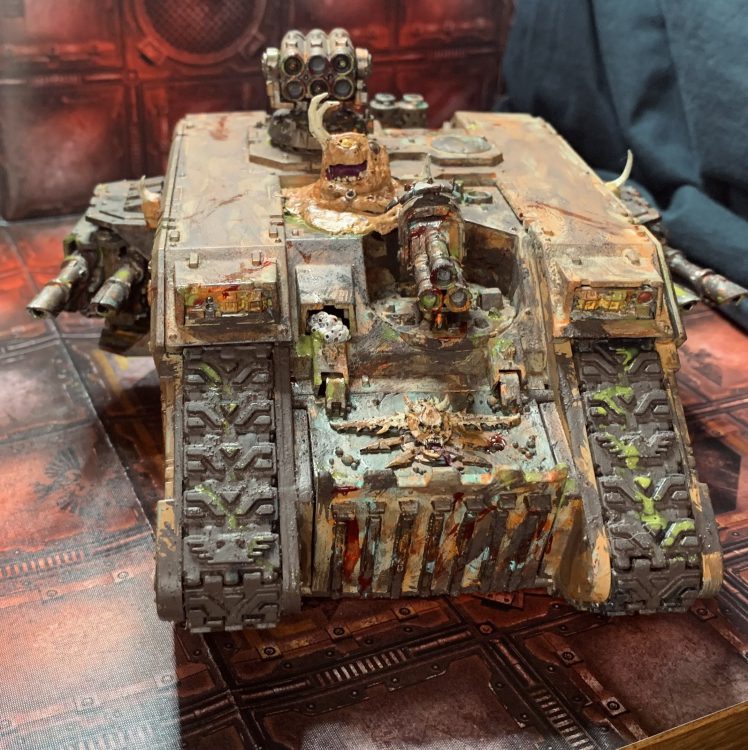 I call this the vector pattern land raider. I was inspired by the old 6th Ed daemonic possession rules for vehicles. I added one of the extra heads from the beast of Nurgle kit, because I was tickled by the idea of a Beast of Nurgle playfully bounding towards enemy combatants looking to play, while possessing a land raider. 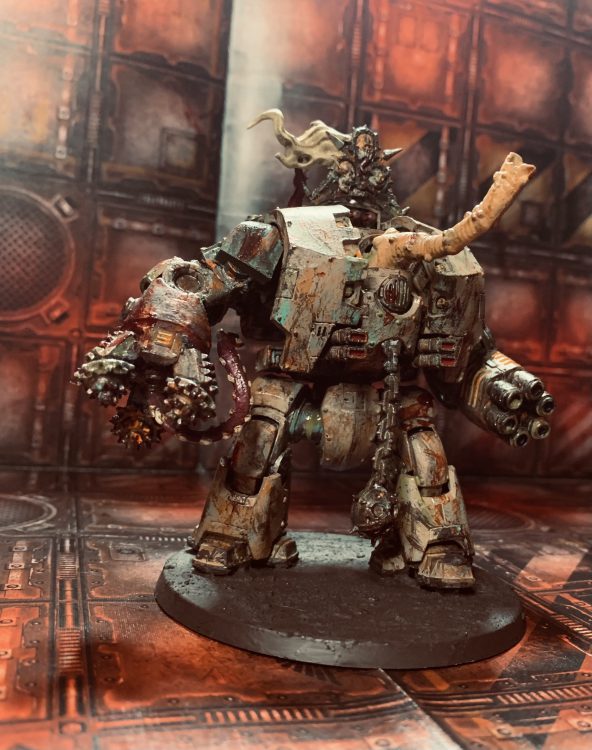 As a continuation of that idea the Leviathan Dreadnought seemed like the perfect vessel for a daemonic Rot Fly. They’re both consumed by bitterness and looking to find some solace in destruction. The base rim is painted brown intentionally so don’t @ me Badcast Dan. I enjoy the idea of units blessed by Nurgle bringing aspects of the garden into real space with them. 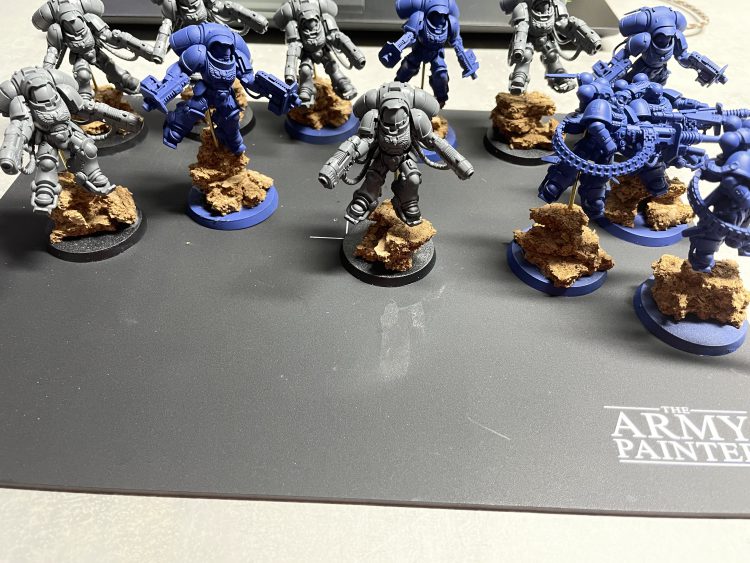 The goal is to paint a 1,000-point army of Ultramarines prior to April 23rd for a Teams Tournament in the mid-West United States. 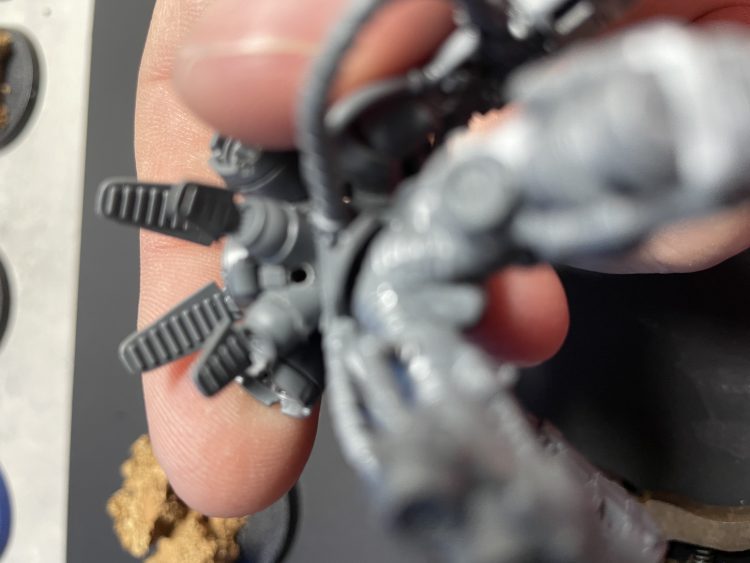 I started with drilling out barrels and rebasing the Inceptors. I opted to replace them with brass rods and cork basing to look like rocks. Specifically, this is the process:
1. Breaking apart the cork base and cutting in half. I was going for thinner layers.
2. Using super glue and putting the cork in 3-4 layers.
3. While that dried each inceptor had a 1/16th of an inch hole drilled into its back using a hand drill. The brass rod (also 1/16th in diameter) was cut to 2 ½ -3” long.
4. The rods were inserted and glued into the hole for each of the inceptors.
5. By then the base was dry enough so another hole was drilled into the cork. I took care not to drill into the base itself.
6. Inserted the rod extending from the inceptors into each base and applying glue as needed.

Since I was doing 5 models it made sense to do the others in the collection as well so in total there were 12 models: 6 Inceptors with plasma exterminators, 3 with assault Bolters, and 3 suppressors. 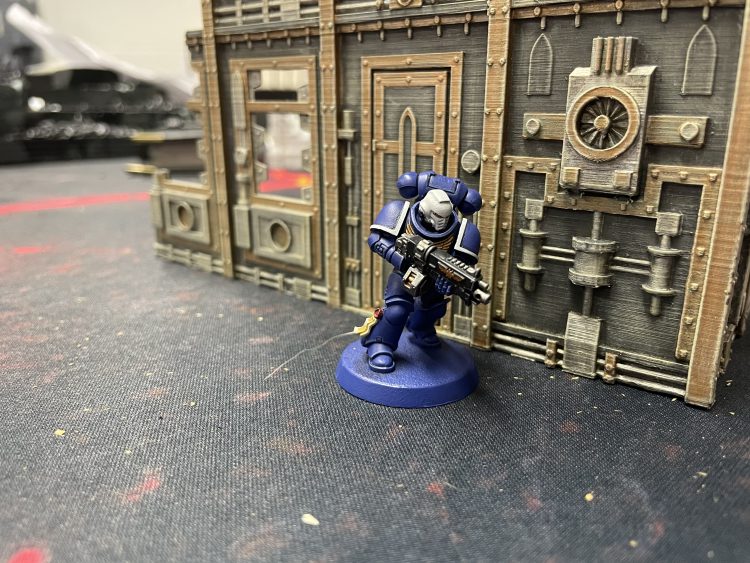 For painting I decided on a 1st Company Veteran look with a few tweaks. Really the primary motivation is the white helmets look cool while the blue helmets look like all the other Ultramarines out there.
I completed a test model and am in the process of batch paint the rest. During the test paint I recorded the process in effort to make it repeatable, here are the steps:
1. All models have already been primed in Macragge Blue. Even so a thin coat of base was replied to each model. The tint between the spray and the actual paint is off which I painfully found out during the test model during touch ups so pre-emptively all the models will get a coat ahead of time.
2. Next is applying Leadbelcher, Corvus Black, and Retributor armor to the model.
3. Touch up with Blue as needed then target wit Nuln Oil in the specific recesses of the model
4. Then painting of the Shoulder pads and helm using Corax White and Apothecary White, then back to Corax white to brighten it back up.
5. For the gun I highlighted with Mechanicus Standard Grey and Stormhost Silver.
6. The armor itself was edge highlighted in Calgar Blue 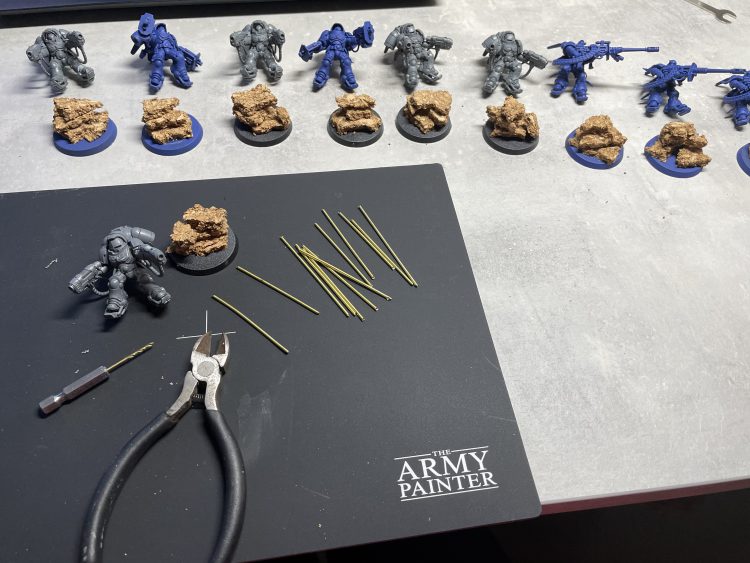 Right now, the models are in step 3 and are on track, with a big push this weekend, to be done 3 days ahead of schedule which that time will be used to finish basing.
Once complete it will make a small but growing mark on the unpainted models of the army. Leaving 1,493 unpainted models. 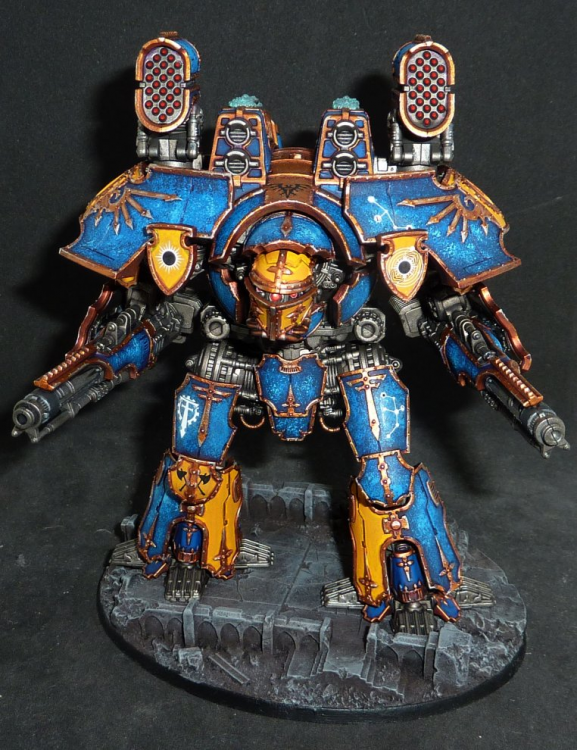 Here’s my Adeptus Titanicus Warlord. I wanted to do a starry sky effect for the armour to match the Warp Runner’s constellation patterns. I did it with sponging on brighter blues in smaller amounts. 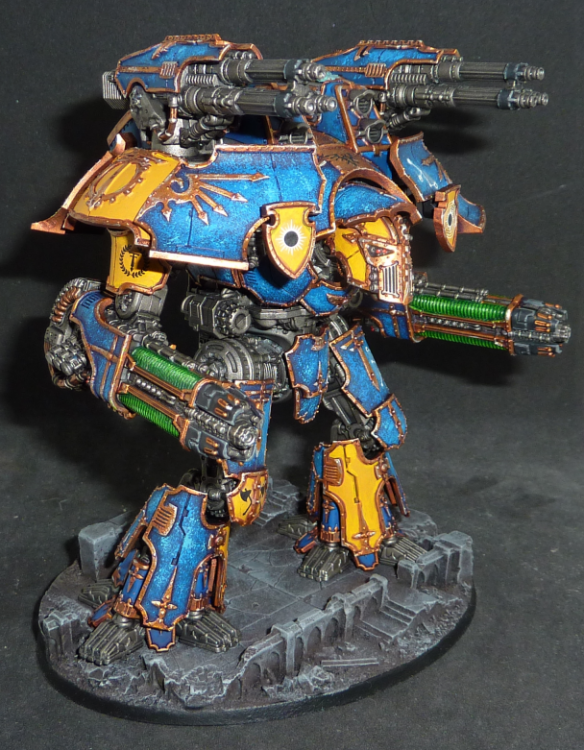 I’m pretty happy with how its come out and I’m sure it’ll be the only Adeptus Titanicus model I ever do. 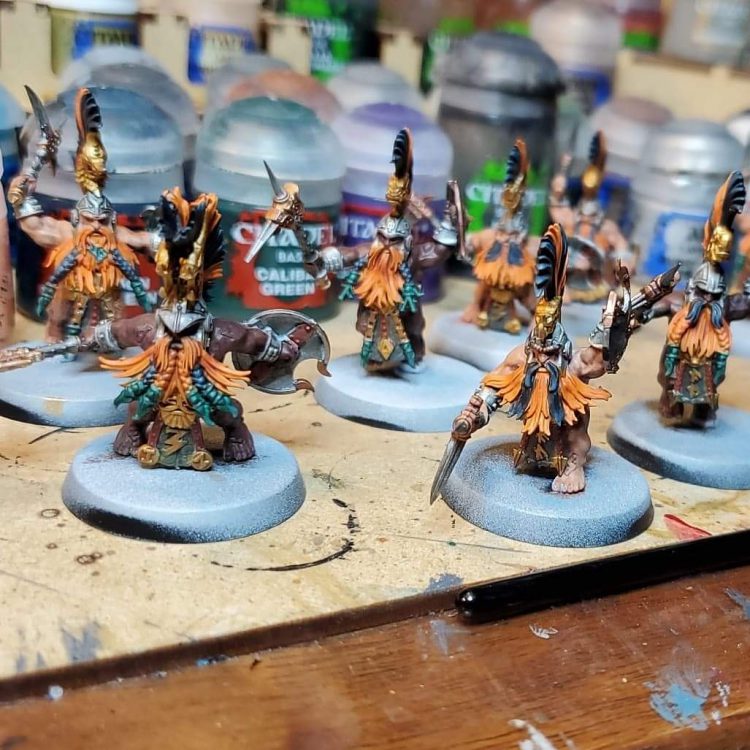 Fyreslayers were the first army I really got excited about for AoS. My regular opponents here include Sylvaneth and a lot of Nurgle, so I thought about what a lodge that had been fighting alongside the Jade Kingdoms of Ghyran might end up looking like. 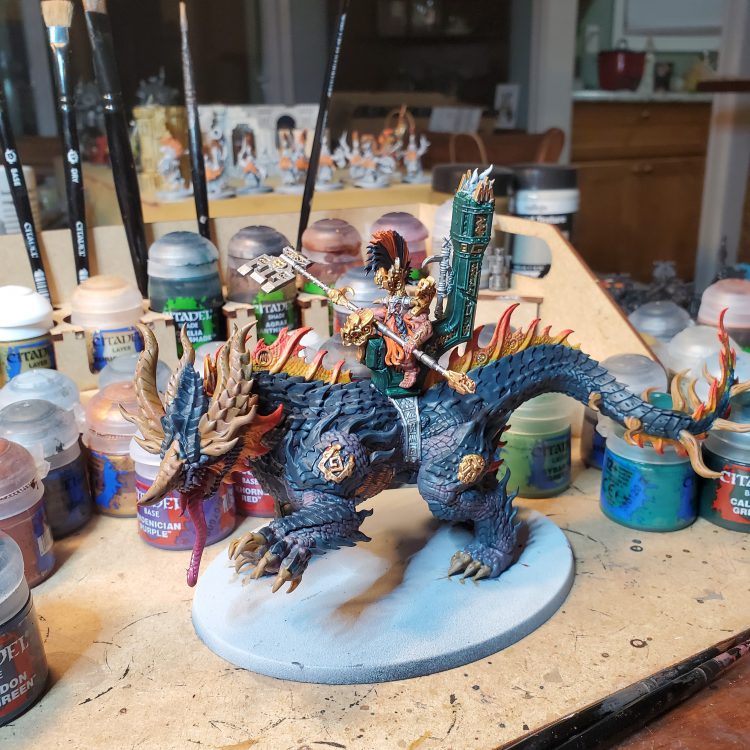 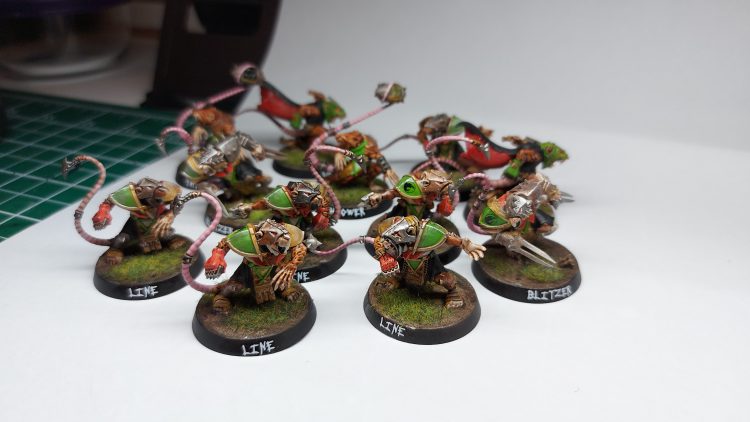 These are my Skavenblight Scramblers, whoms’t have seen better days but still want to score as many touchdowns as possible yes-yes. 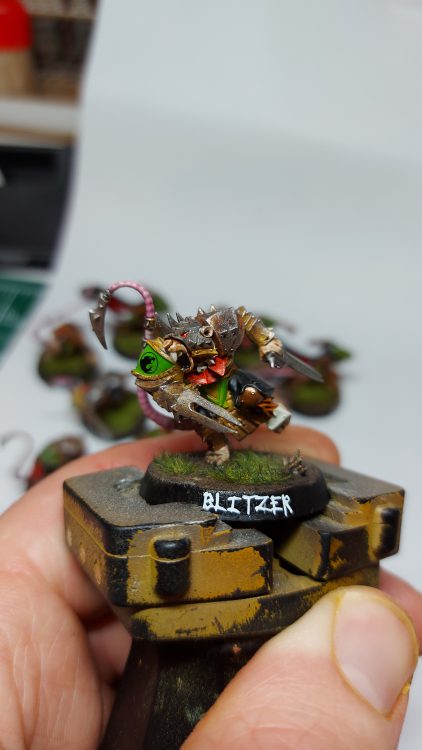 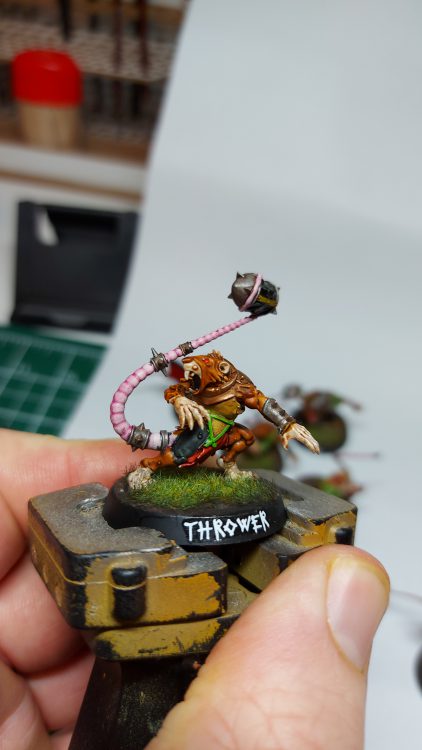 Phew! That’s a lot of paint and plastic slinging around. Once again and big, big thanks to all our gracious Patrons for showing us their cool toys this month. If you’d like to join them on next month’s Roundup, or just hang out in our exclusive Goonhammer Discord server, check out our Patreon and join at the $5+ tiers.