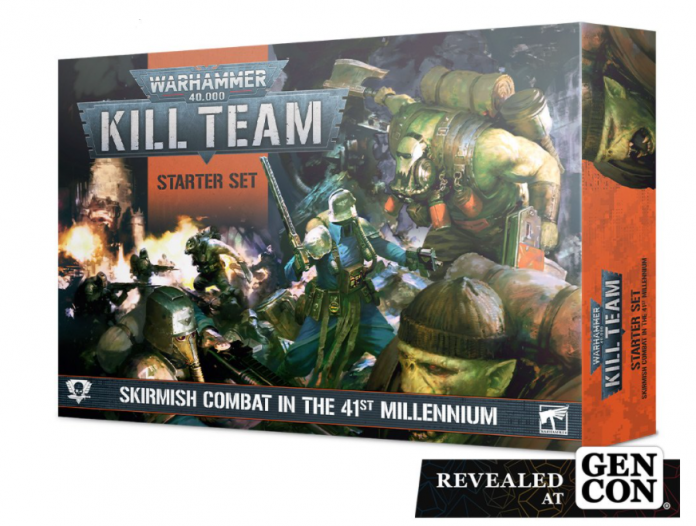 Kill Team released with a whole new edition earlier this summer to significant fanfare and some incredibly cool models. Since then we’ve already seen the release of one major expansion (Chalnath), plus a series of updates in White Dwarf. This month sees the release of a new Kill Team starter set, featuring Kommandos and Veteran Guardsmen, with everything new players need to start on the game.

Before we dive in to our review, we’d like to thank Games Workshop for providing a copy of the new Kill Team Starter Set and the Octarius Book for review purposes.

Additionally note that, while this box is new, the rules are (mostly) not.

A New – but Familiar – Starter Set

For those of you who are confused, you’re not experiencing Deja Vu: this Starter Set, which was first teased at GenCon last year, has a lot in common with the initial Kill Team Octarius box released at the game’s debut. However, this box offers a much more streamlined experience, with less terrain and a smaller rulebook. The box still packs a ton inside, with everything you need to get started.

Contents-wise, you get two kill teams – Ork Kommandos and Veteran Guardsmen – plus a sprue of Ork/Octarius-themed terrain. The Kommando and Veteran Sprues are what we’ve already seen before, and the Ork terrain is the same stuff that comes packaged with the Mekboy Workshop – the small areas of difficult ground/scatter terrain. It’s not the massive Ork fortress of the Octarius box, but it’s enough to play a solid game of Kill Team on.

Also included in the box are the Kill Team Essentials – the measuring tools and barricades.

In addition to the terrain, you also get a fold-out paper mat. It’s not as thick or heavy as the card mats that came with older Kill Team boxed sets, so if you already have one (or a dozen) of those, this won’t be another heavy addition to your collection. It’s fine for learning on. 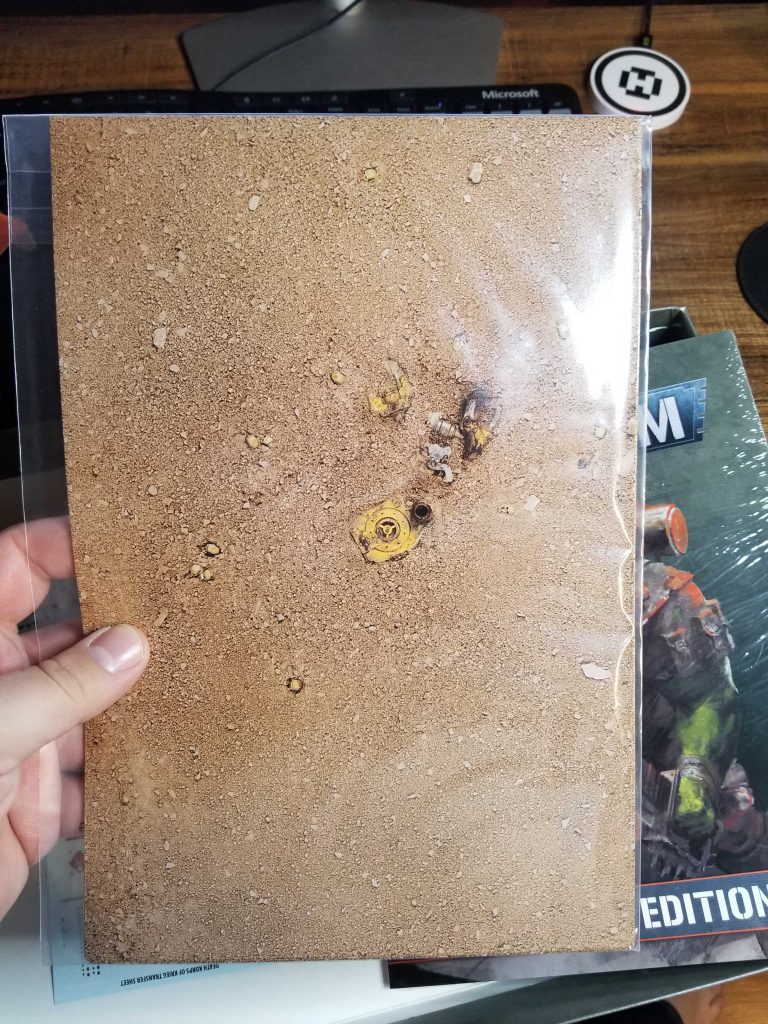 The Starter Set comes with two books. The first is a smaller, more compact edition of the Kill Team core rules. 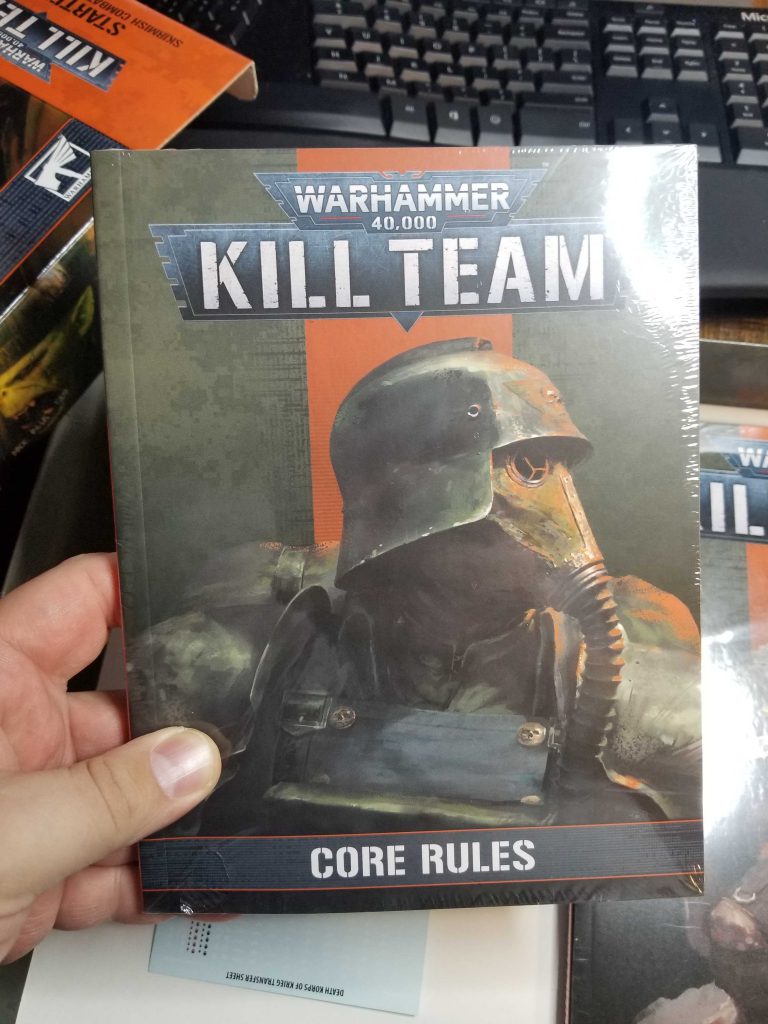 This book’s about half the size of the Core Rulebook that came with Octarius – sized the same as the Crusade books or the General’s Handbook or 40k Grand Tournament Missions book – and it has everything you’ll find in the larger core rules. It’s just much handier and easier to carry around; perfect for taking to events or a friend’s house. I want all rulebooks to be this size, but I’ll settle for just not making them hardcover most of the time. 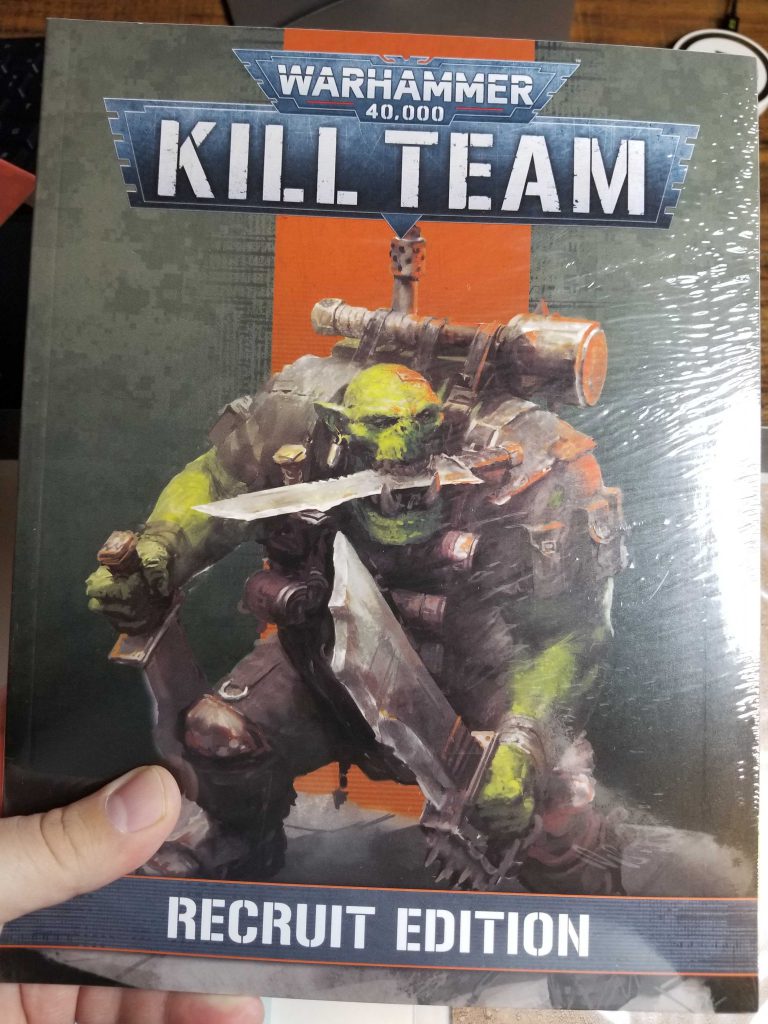 The other book included here is the Kill Team Recruit Edition Rulebook. This book is basically your “quick-start’ guide to the new edition of Kill Team. Included in this book is a detailed guide to playing your first game, with step-by-step instructions in the form of a set of missions that walk you through each mechanic – movement, shooting, melee, etc. – plus datacards for the Veteran Guardsmen and Ork Kommandos included in the box. These streamlined rules are a great way to get started, and run you through the sequence of play for a full turn in a way that’s very clear and helpful.

If there’s anything missing from this new, streamlined box, it’s the Octarius rulebook – that’s being sold separately, and the Recruit Edition mentions it as the next step for play, with the full rules for the Kommando and Veteran Guardsmen kill teams. The Recruit Edition book only contains datacards for the two teams, and doesn’t have the rules around building fire teams, equipment, tac ops, ploys, or Spec Ops. To get those you need to buy the Octarius rules. That’s not ideal, since it still means there’s another book you have to buy to play the “real” game with people – a criticism leveled at Games Workshop with the edition’s release in regard to the Compendium. The flip side is that it keeps the box lean; if you don’t want to make Guard or Kommandos your kill team, you haven’t already paid for the book with their rules.

There’s a lot to like about this boxed set as an introductory product to the new Kill Team. It’s a lean experience, the models are great, and there’s enough terrain here to play good, fun games of Kill Team without need a ton of clutter. The price tag on the box is very solid as well, clocking in just above the combined cost of the two teams, and there’s definitely a ton of value with the extra terrain, game essentials, and rules on top of that.

If you felt the initial Octarius box was just too hefty a price tag as an initial investment in Kill Team, the new streamlined Starter Set is much more reasonable as a way to get two players into the game and have a good time without the need to go deeper – how good of a deal it is depends how much you value all the contents, but assuming you want at least 2/3rds of what’s here this is more efficient than buying separately, and if you want everything it’s fantastically priced. Kill Team 2021 is an incredibly fun game with a lot of depth, and as a starter product this is great.