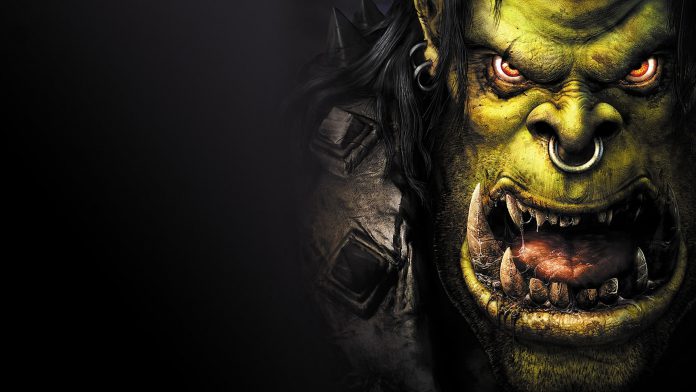 Welcome back to GOONHAMMER ’02, where we look back at the games and media that we loved 20 years ago. Today Thanqol is talking about Warcraft III, which released in 2002 and would go on to change the face of games as we know them.

Warcraft 3 was an epoch-defining game. It brought the RTS genre to the height of its popularity, with a four part campaign and a competitive multiplayer scene. It was the magnum opus of, at that point, gaming’s most beloved company – Blizzard Entertainment, pioneers of the incredible strategy of ‘don’t release a buggy unbalanced piece of shit’. It also represented the height of if not Blizzard’s popularity then its reputation – WoW would come later and be an even bigger hit, but people complained about WoW. Nobody had a bad word to say about Warcraft 3. Blizzard were the rockstars of the video game world and the outro credits literally featured a rock and roll concert as an in-engine cinematic.

And much like a rock star, twenty years on from that dizzying concert where everyone was chanting their names, 2022 Blizzard is a broken, drug-addicted husk with reprehensible political views and a litany of sexual harassment claims, trying to cash in on their past glory. Even the remaster of Warcraft 3, which should have been the easiest of slam dunks, became a horror story; the nightmarish contrast between what was and what is never illustrated more viscerally than Thrall auto-attacking a single butterfly into the unimpressed chest of a demon lord.

But this is 2002. This is the year where three brothers share two computers. Warcraft 3 was The Game. There was nothing else. One game, every night, for years. How did we not become sick of it? We did this for years. And it’s not like we were playing competitively; we were on Australian dialup, we might as well have been trying to fight Neo in the matrix. No, we were doing something far more important: We were going into the Custom Games.

See, Warcraft 3 was more than the ladder and the campaign. It came bundled with an enormously powerful set of mapmaking software. The mapmaker came with all the assets and abilities of the full Warcraft 3 campaign – a truly shocking range of powers. You could change the size of models, creating giant skeletons, and change their colour according to a full RGB slider. You could add particle effects or auras. There were some Starcraft 3D models in there in case you wanted to literally recreate a Starcraft campaign mission inside Warcraft. You could do scripts and cinematics. It was an unprecedented, user-friendly gift of fire that was usable even by a teenager who had never coded before.

You might know that DOTA – Defense of the Ancients – was originally a Warcraft 3 custom map. The three lane structure, the autoattacking waves, and players placed in charge of a single hero – there were thousands of versions out there. People would download a DOTA map and then edit it, making their own balance changes or adding their own heroes and assets, or even just fixing things so they couldn’t lose. When eventually the scene erupted with a bunch of standalone competitors, including the eventual winner, League of Legends, these were ideas that had been honed, hacked, balanced and mastered in years of beta testing and iterative development within Warcraft 3.

The second most popular genre to clearly trace its origins from Warcraft 3 was Tower Defense. Less popular, but much easier to make, TD games were almost like early mobile games – making a small number of resource allocation decisions and then seeing how they stacked up against an incoming wave of enemies. At the highest level they’re almost more like math problems than anything.

And that’s about where the popular understanding stops… but that was not the end of Warcraft 3’s custom map scene. That was hardly even the start. Among Us – popular werewolf game with a cute art style. That existed in Warcraft 3; literal werewolf games where at night someone would shift into a murderer and wreck a bloody harvest, and survivors would have to guess who when dawn rose again. Some were focused on the community voting and accusation aspects, others hid weapons around the map creating an entirely different predator-prey dynamic where the heroes split up to accumulate weapons, then tried to come back together so they could overcome the werewolf as a team, hoping not to lose too many people to death or lag in the process.

Another thing that was happening around 2002 was the second Lord of the Rings film, The Two Towers – and it too had massive representation in the WC3 map scene. There were in depth recreations of the Battle for Helms Deep, there were grand strategy games where the entire map of Middle Earth was recreated with 12 playable factions from the Nazgul to the Balrog of Moria to the Fellowship. There wasn’t just one Helm’s Deep map either, there were dozens – some with scripted explosions, some with a red-hued orc who dealt huge damage to buildings as the guy who jumped on the bomb pile, some where the battle was expected to go back all the way to the caves inside the Deep itself.

Magic the Gathering existed in Warcraft 3. Clever manipulation of resource harvesting rates created a world where units had costs equivalent to mana. Upgrade enchantments, one-use scrolls to represent spells, coming in duel or free for all formats. Dungeons and Dragons existed inside Warcraft 3. A big sprawling campaign setting where a GM player has a hand on the difficulty curve. Solo campaigns as sprawling as the ‘real’ one, with elaborate stories and scripted encounters. Zombie defense games. And this is all the stuff that fits into genres; there were also so many one-offs, odd little ideas that weren’t really meant to be iterated on so much as they were to be experienced just once.

(Naturally, when modern Blizzard released Reforged, they went out of their way to pre-emptively kill that ecosystem by claiming full copyright to every custom map users designed. A spiteful act to try and bolt the door two decades after the horses had bolted.)

But of all the games I experienced in Warcraft 3 Custom, one stood out more to me than anything else and still burns in my memory to this day. As far as I know it was never recreated, nobody ever launched a standalone edition of it. But it was a strange little miracle of its own. These were Film Maps.

Multiple players would land, each in control of a different part of the map, each with a jumble of assets under their control. Maybe some skeletons, a space marine, and a pair of dragons. You have a bit of time to see what you have, play around with it, and design a narrative in your head. And then… the lights fall. The camera rolls. And every other player’s vision is locked to focus on a cameraman model under your command.

And then you ran a little improvised cinematic

You take whatever pieces you were given and you tell a narrative with them. You use your micro not to defeat your opponents in glorious combat but to ensure that the elf and dwarf start running at the same time, that the farmer aims that critical kill-shot at the sea god emerging onto her property, that the building bursts into flames right as the mob emerges from the inside. You type frantically into global chat the few pieces of dialogue you need and then keep the story going. If you are really skilled you can tease out some slapstick scenes from the bits you have been given, using careful timing and reveals to generate comedic moments. And then, the next player takes her turn, and at the end people vote for their favourites.

And what a concept that was.

This, then, was a video game that you were playing in 2002 in order to create real-time one-girl stageplays. To perform dramas, romance, comedies, tragedies and action set pieces with the pieces given, a cross between roleplaying, videogaming, cinematography and Thank God You’re Here. Your physical skill is an essential part of the performance, not for the subtle body language you might express, but for your ability to co-ordinate your virtual actors for the entertainment of your peers. Where else could you go on the internet to receive a live puppet show like that in 2002? And as time went on these could become startlingly elaborate or genuinely clever. Film Maps were a small thing, but they were a real and amazing thing in an endless sea of amazing things.

Today we’ve got more information, more choice – but oftentimes, less serendipity. When you go searching on Steam you basically know what you’re getting into. But when you clicked on DOTA8.2.1AUZVR in an unsorted custom game list you didn’t know if you were getting the cutting new mainline meta branch or some kid’s weird idea of how to fix DOTA. When you opened a Helm’s Deep map you didn’t know if it was going to be a grand strategy macro affair or a hero based wave defense. And you didn’t know if the Film Map you clicked on was going to create a bizarre, unexplainable memory that would stay with you for the next twenty years. It was a time of strange, magical doors. Some lead to glory, some to misery, some to getting stomped by an invincible 12 year old who had tricked you into entering her power fantasy. Nothing like it ever existed before, and likely nothing quite like it will ever exist again.