Well, 2020 is quickly coming to an end and that means it’s time to look back on what we accomplished this year from a hobby standpoint. This was our first year doing regular hobby round-ups on a semi-monthly basis and it’s cool to see what the full view on all that is. In today’s hobby year in review, Greg is talking about all of the models he painted.

One again, we’re sitting here putting taillights to The Year That Was, and honestly? I had a pretty good one, all things considered. I haven’t had to move or find a new job, and I haven’t gotten sick, so I’m feeling a mix of gratitude and guilt on that one. Everything outside these walls is a total nightmare, but in here, the weather’s fine. I’d say come in, only you absolutely cannot do that.

This January was consumed with wedding planning, and in February, I married my lovely Muscle Wife, who you may know from wildin’ out in our Escape the Crate review, which ended up being less about the product in question and more about the Mothman’s dumptruck ass. The wedding was great, obviously, we jetted off to Costa Rica for a week afterwards, and my review of attempting not to drift a RAV4 off a mountain is: there’s worse places to be in February.

We got back on March 1st, and I managed to sign up for the NoVA Open GT from the airport while we waited for our bags. It was going to be just my second time at NoVA, and already my first as a presenter. Rob and I had a seminar scheduled, that no one was going to attend because, in what I can only assume was an absolutely savage act of destruction, it was set for the same time as the goddamn Games Workshop preview event.

We all know how that one went.

With that, I’m going to stop covering the year that was, because it’s, near enough as makes no difference, exactly the same as the year you had. The last thing anyone needs is me re-capping nothing happening.

Back in January, I met up with Goonhammer contributor Evan “Felime” Siefring, and slammed my pre-Ritual of the Damned Dark Angels into his Guard. I did end up winning that game, though only barely. My chaplain venerable dreadnought, Barbatos, exploded and did enough mortal wounds to kill almost all of the hostages that he was supposed to be rescuing. As usual, he couldn’t even screw up correctly, and so despite losing almost my entire army, I eked out a win, my second of 8th edition.

In February, fresh off the release of Psychic Awakening: Ritual of the Damned, I took my Dark Angels out, then put them away, and busted out Booley’s Tau for the first and only time, against Dan “cha” Boyd. I covered this one as my fourth-best game of 8th edition. If anything, I wish I’d rated it higher.

I played no more games.

This was a big hobby year for me, which is one of two types of year people had, broadly speaking. Either you used all your allotted hobby time to paint three armies because you weren’t able to spend that time gaming, or you totally stopped caring about painting because you weren’t playing games.

Rather than break down every single unit or model I painted, this should be illustrative. Here are my hobby display cases at the end of last year (actually late October 2019, but since I didn’t do much after that on account of wedding planning, this is basically the same as January 2020): 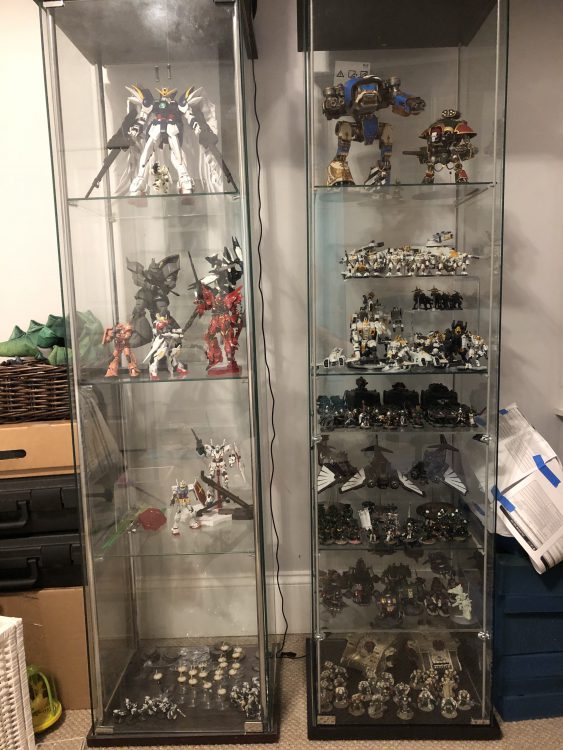 And here are the same displays, today:

Not only are there more of them, they’re much more cramped. If I get even one single additional model, I’m going to need a fourth Detolf, which I’m sure is thrilling news to my wife, who is just now finding that out as she reads this (hi, and can I use the shared credit card for it?).

The rough total for the year was:

It’s a lot! Regularly-scheduled Zoom hobby hangouts did a lot of the heavy lifting here, but I can’t deny the power of contrast paints and lowered standards, either.

Here, at last, is the meat of it. The thing I’m best at: Posting. It’s fair to ask what the hell it is I do around here, and other than (usually) keeping the site online, I’m still not entirely sure, but I’m working on it. In addition to chiming in on our bi-monthly hobby progress updates, and some HTPEs, I started a couple of irregularly-recurring features here, none of them essential reading, but all of them my proudest text-based children.

Between Meatwatch , the Kids’ Table, and an opinion piece about the Dark Angels, I’ve been trying to carve out a niche here that’s distinct from our core competency of competitive gaming and hobby tips – why write evergreen content about the games you love, when I could contemptuously waste your time instead? Hobby and competition are our collective competencies, but not mine, and my goal all along has been to expand the scope of what we write about, mostly by skirting around editorial control and plopping out insane screeds before anyone can stop me. Things I didn’t get to? I wanted to do more things along the lines of Your Warlord Sucks, because roasting things with Rob is something I’ve done for years and I never want to stop. I’ve also had it in my head to start covering Gundam model kits here, but it hasn’t quite come together yet. Maybe next year.

The most striking thing about this type of article is that while Greg Posts don’t do massive numbers, particularly compared to a Start Competing or a codex review, which are worthwhile things that appeal to a broad audience, the people who do read them seem to really enjoy them. If the outcome of my experiment here is that a small group of people love what I’m doing, and a much larger group of you don’t care at all, I completely understand, and I don’t blame you. Look, I get it. I stand behind my body of work here, and my ability to write words, but nobody comes to Goonhammer hoping to catch one of the eight Greg Posts that happen every year, on a schedule that respects none of the laws of gods or men. I appreciate our entire audience, but I’m only really able to write things that appeal to a small part of it, and that’s fine, if they appeal very hard. I’ve never been reliable enough to slam out a post a week like Kevin or the Titanicus Boys, let alone carry the kind of editorial load that someone like Rob, Liam, or James does. Being free from the constraints of earning my keep frees me up to only publish what I want, when I want, and still contribute.

Reader, who the hell knows.