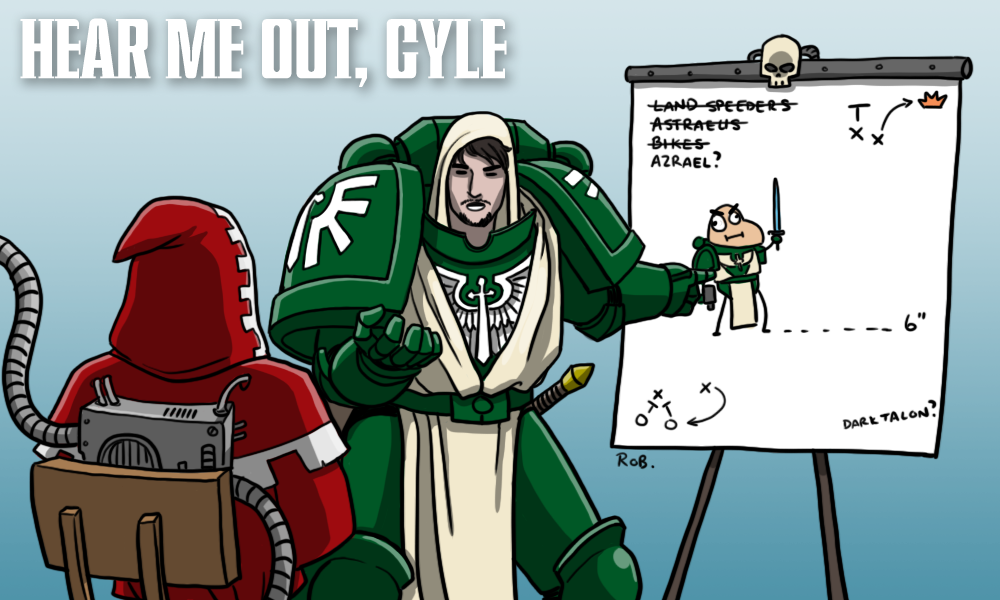 The Road to Renegade: A Two-Hog Journey

Hello Brothers, it’s Chase “Gunum” Garber here!  As you’ve no doubt been discovering from my “Hear Me Out” series of write-ups, wherein I take a terrible idea and try to make a competitive list out of it, list building has been going well. This week I figured I’d take a break from that series here to talk about the work I have been doing to prepare for one of the largest GTs in the Midwest, The Renegade Open!

As some of you may know, I’ve been to my fair share of 40k events, from Majors to RTTs being hosted locally.  Right now I’m currently on a quest to lock down the ITC Best Dark Angels spot by the end of this ITC season, which has not been going super well, but also not bad! Currently in 7th place, but who’s keeping track?

I’ve been playing 40k pretty constant since late 5th edition but 8th has been by far the most challenging time for me in the hobby. I’ve hopped all over the place in this game as I’ve had so much fun. There are almost too many options. My painting style is still that of a dreaded WAAC player, and I can admit that about myself. I honestly try to put forth better work when I do sit down to work on my characters, but the rank-and-file parts of my army? Give me that three color minimum, baby.

Now readers, the number one question I got asked is “Why? Why Dark Angels?” And here’s where I tell you that, in a shocking turn of events and despite my competitive nature, I just fell in love with the aesthetic of their army. Battle priests? It seems pretty badass. Not only that, but I used to play Cypher on an almost religious basis back in the 7th edition. I’d probably be playing Fallen if I was able, but a pure Fallen Army is the only thing worse then pure Dark Angels. And that’s saying something.

What Are We Even Talking About?

My adventures at The Renegade Open started a long time ago–maybe 5 years ago now? I’ve been to every single Renegade but the first one as the event has been a mainstay of the area. The two men I know who run it, Paul Huck and David Arimond, have put an amazing amount of blood, sweat, and tears into making the event what it is today. The Renegade Open’s crew is a coalition of local hobby game store staff, tournament organizers, judges, tabletop enthusiasts, and players. They are built from the community at the ground level – it’s the culmination of over a century of collective industry experience put to task.

Recently, I’ve been doing a lot of experimenting, a lot of playtesting. It’s time to pull back the curtain and reveal the goal I’ve been working toward this whole time. That is, taking a GT (or at least placing well). To say that doing this with Dark Angels will be a challenge is an understatement. The army needs help and my attempts to play against superior marine lists will be what tips the scales in my favor on game day.

The Renegade is the weekend before Thanksgiving and I’ve got a couple of weeks left to solve the greatest mystery of them all: How do I make Dark Angels good?

Hear Me Out, Reader!

I have been back and forth on lists. Trying out a list that was every one of my Hear Me Out’s put together. I tried my NOVA list again, but the new Space Marines and the new Eldar traits are tough to play around. I decided that since doctrines or high AP is everywhere in the game I would invest in Invulnerable saves.

The plan for this event will be simple: Live long enough to do anything. Gain points by not dying. Seems fine, but also counter-productive to the entire game. I have a pretty deep toolbox to pull from, I own pretty much every model I could use to fulfill the list of my dreams. Too bad those dreams are full of Angels who are the wrong shade of green.
(Editor’s Note: There is no “right” shade of green)

So here’s the list I’m currently planning to bring to this grand ole’ performance. It’s a mix of things I have found to be successful, as well as some really bad things. So without further ado, HEAR ME OUT:

Okay, so you are very curious about some of the ideas that are going on behind this list, which is completely understandable. I bet half of you had to google what the hell a Land Raider Achilles even was. Readers, let me tell you, not even two weeks ago I was in that same boat, but man has it been a wild ride.

In true HMO fashion, let’s look at what one of the key units I’m planning on taking: 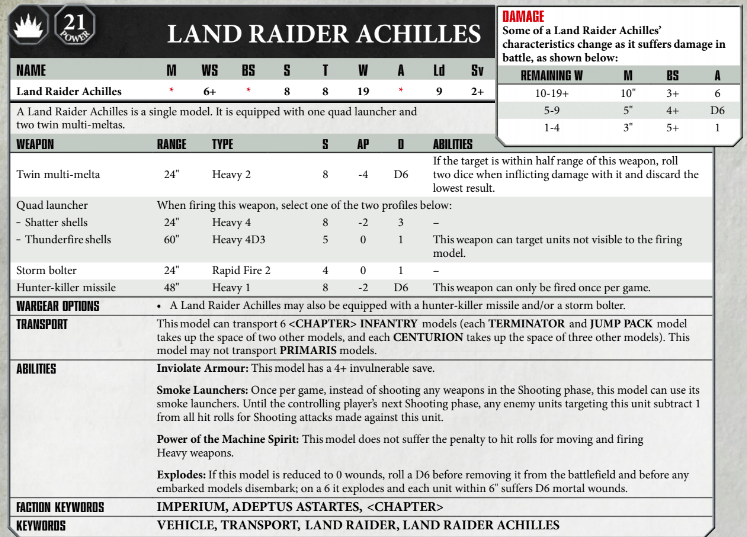 Shocking I know. First off, the word Land Raider is in there, and I already know controversial that is. This thing I have felt will be able to provide the survivability I need to push forward and make things happen. Look at it. Would you just look at it This unit has the tools to answer a lot of the issue I foresee my list having issues with it. Besides the built-in 4++, it gives me access to a weapon I normally do not. It has a Thunder Fire built into its nose! Not only that but its a Thunder Fire with a direct fire option that is S8 -2 3DMG. If I can get this to cruise up the table flanked by Ezekiel, the Gravis Captain, and the Leviathon Drednaunts, there will be a high chance it will be able to dump some real shooting into any Knight equivalent. Four multi-melta shots and another grouping of three damage shots? Things do not want to be within 24″ of this bad boy.

So here we, going into my second real test game tomorrow. Hobby wise, this will be easy enough for me to get together as everything is painted but the Land Raider. That might…uh… need some TLC. (Mind the gaps) But overall I’m excited about what this list can do. With the Invuls on everything, it’ll make target priority hard for anyone I play against.

One thing you’ll notice, and one thing I need to work on as a… hobbyist…  is building.

I’m sure a lot of you feel a level of disgust that only Cyle and close family members have experienced. My models might look fine once I get them painted, but boy, oh boy, am I messy builder. This is going to be my project for the time leading up to The Renegade. I’ve already got the epoxy and blood I’m going to use to plug those unholy holes in some sort of ritual I’m sure exist.

Naramyth: I have returned. And I am disgusted.

This is my sixth Renegade. There has only been six Renegades. I’ve complained about the format the entire time and I’d like to think I’ve worn them down enough to just run a normal format. This year I’m bring the weird tech priests from Mars. I’ve had a couple weeks off from 40k with getting married and honeymooning. I’ve been playing around with Marines, including trying to become part of the problem but the season isn’t over yet, trophies aren’t in hand, so the Adeptus Mechanicus will hit the table again. I’ve honestly not thought too much about my Admech list since Iron Halo. I’ve tried it out doing some solo basement hammer against a variety marine lists and the Hillbilly Yacht Club has held up well. I bring 11 hulls to the table, my scoring is protected, I have Deep Strike threats, and my shooting lines up favorably against the light vehicles marines want to bring. 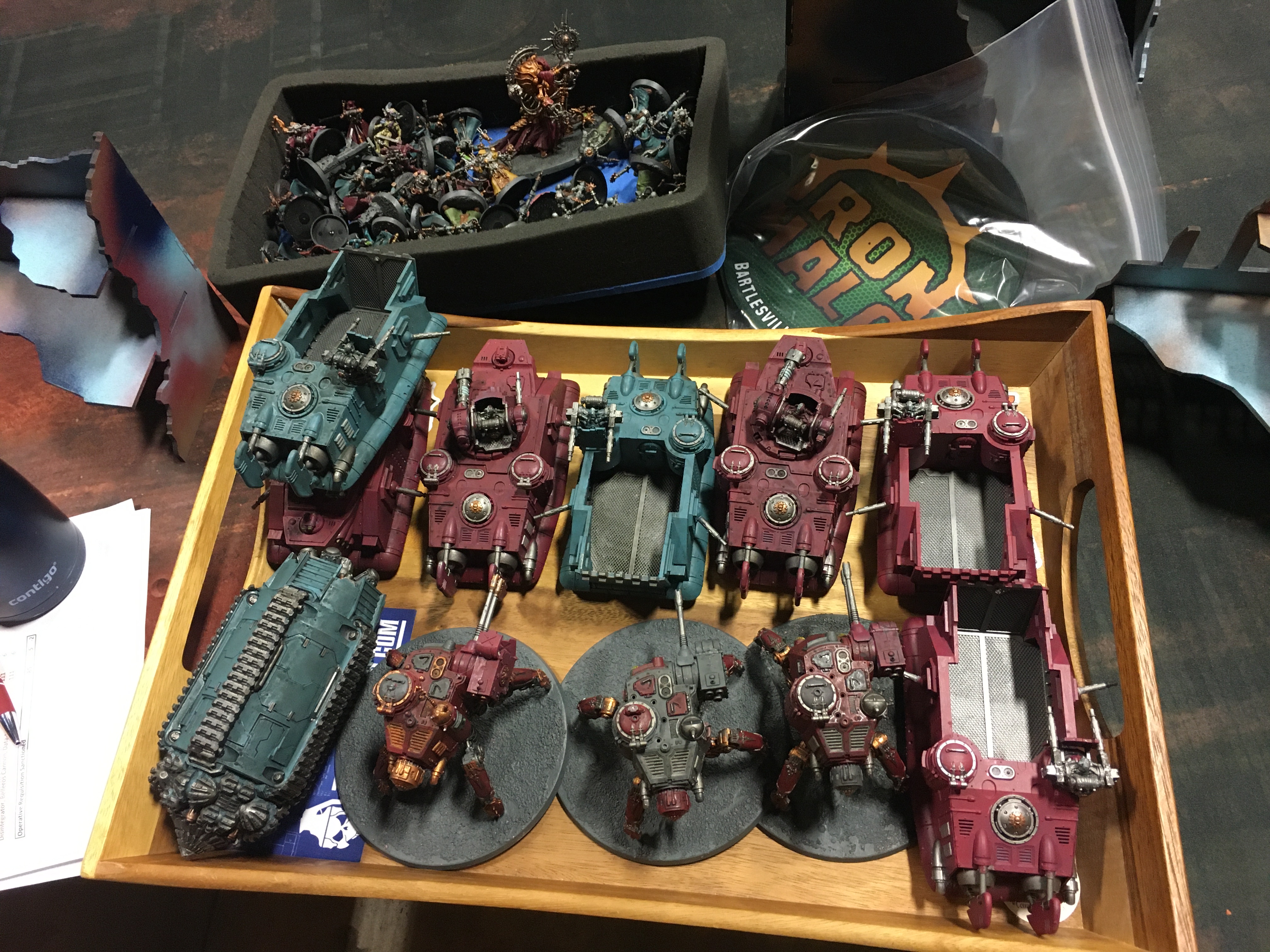 ~Fat army on a tiny tray~

That’s the list, dear reader. Priests for a combat threat, drill for the deep strike backfield harassment and Recon potential, tech dad bringing his pocket smite, and a man-pile of shooting around the OG Eldar flier killer, McWreckius Flierus Cawl.  It feels weird not having to rush to build things for two Majors in a row and playing the same list to the model, but when it works it works. Also with the limited pallet of options in the Admech codex, I feel like I’ve really hit the wall on what else I could add to the mechanized style of play. Dragoons, Ballaistarii, and Kataphrons all give up Gangbusters and I don’t really want to go into the MSU plasma Rangers build because although I think it’s powerful and can act a bit more independently compared to the Cawlpile exposing Rangers to just trade away doesn’t feel great. Also with Marines oppressing my worst matchup, Genestealer Cult, I feel better about the field composition overall. Maybe it doesn’t matter and I’ll lose all my shooting to back to back to back to back to back to back alpha striking Iron Hands air forces, but that’s the life you play chasing mono faction hardware.

Next Time: The Road Continues

Rest assured, Dear Reader, that this is not the end! There’s more in store for these hogs in future installments of our Road to Renegade series, wherein you’ll find all the answers to burning questions such as: Did Chase ever get his Achilles properly assembled, with gaps filled? Has married life slowed Cyle down? Will Chase’s latest insane attempt at Dark Angels glory pay off or will he be completely dumpstered? Will Cyle secure that hard-earned Top AdMech player trophy he’s been working on all year? Find out the answers to these questions and more in our next Road to Renegade!

Also, if you have any feedback or questions for the Hogs, feel free to drop a note in the Comments below, or email us at contact@goonhammer.com.