This week’s Hammer of Math takes a deeper look at the Secondary Objectives in Arks of Omen in terms of fragility with respect to rounds.

Last week I did a deep dive into the Secondary Objectives of Arks of Omen, and one of the bits of information that Rob requested was that I add the minimum rounds required to achieve the maximum potential points for each objective. During the course of running the numbers it occurred to me that with a bit more analysis we could look at each objective in the context of fragility, meaning how susceptible a given secondary is when things go wrong. For example Grind Them Down requires you to succeed every turn in order to maximize VP; if you miss a single round then you’re capped in what you can achieve. Secondaries like that ride on what I call the Line of Intolerance due to their unforgiving nature. On the other hand many Purge the Enemy secondaries like Assassination and Bring It Down have no limitations on when a player can achieve 15 VP, so long as the opponent has enough targets. This means that Grind Them Down is more fragile than an appropriately chosen Purge the Enemy secondary. Of the 96 secondary objectives only 26 (around 27%) are completely resilient. 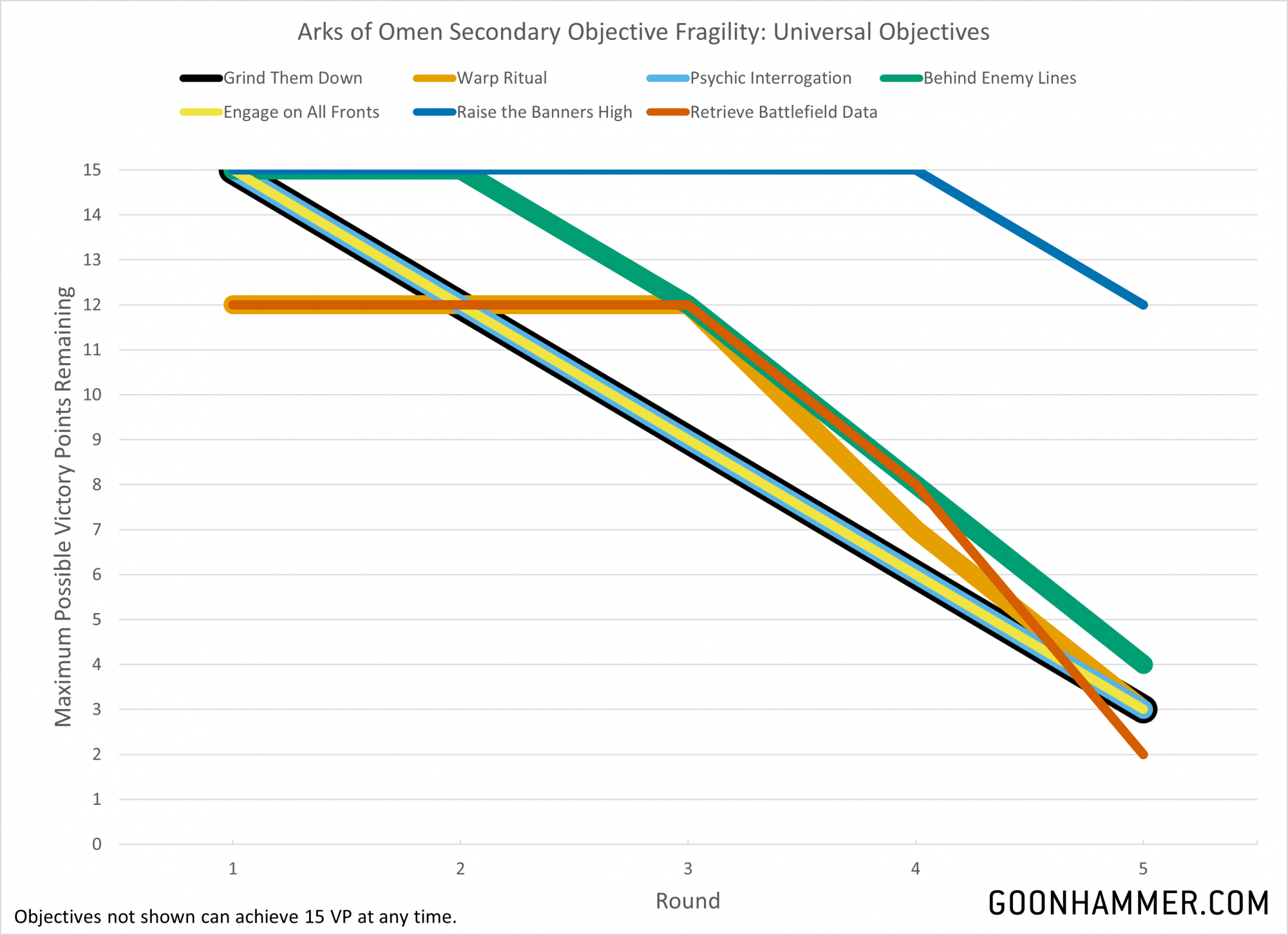 The chart above shows the maximum possible victory points as a function of round. We see three secondaries which ride the Line of Intolerance; Grind Them Down, Psychic Interrogation, and Engage on All Fronts. None of these options offer any leniency, with a single missed round capping their potential. Raise the Banners High deserves some special attention courtesy of the option to have multiple units raise banners at once. Note that the 12 possible points in Round 5 is a bit of an oddity; it requires you to actually have already taken six objective markers in order to get the 6 VP in the Command phase. In reality you have agency over 6 points, which still makes it an exceptionally good secondary. The two secondaries that are capped at 12 VP are unusual in how they cross the line of the other less forgiving secondaries. Retrieve Battlefield Data is particularly harsh if you are unable to score anything until the final round. 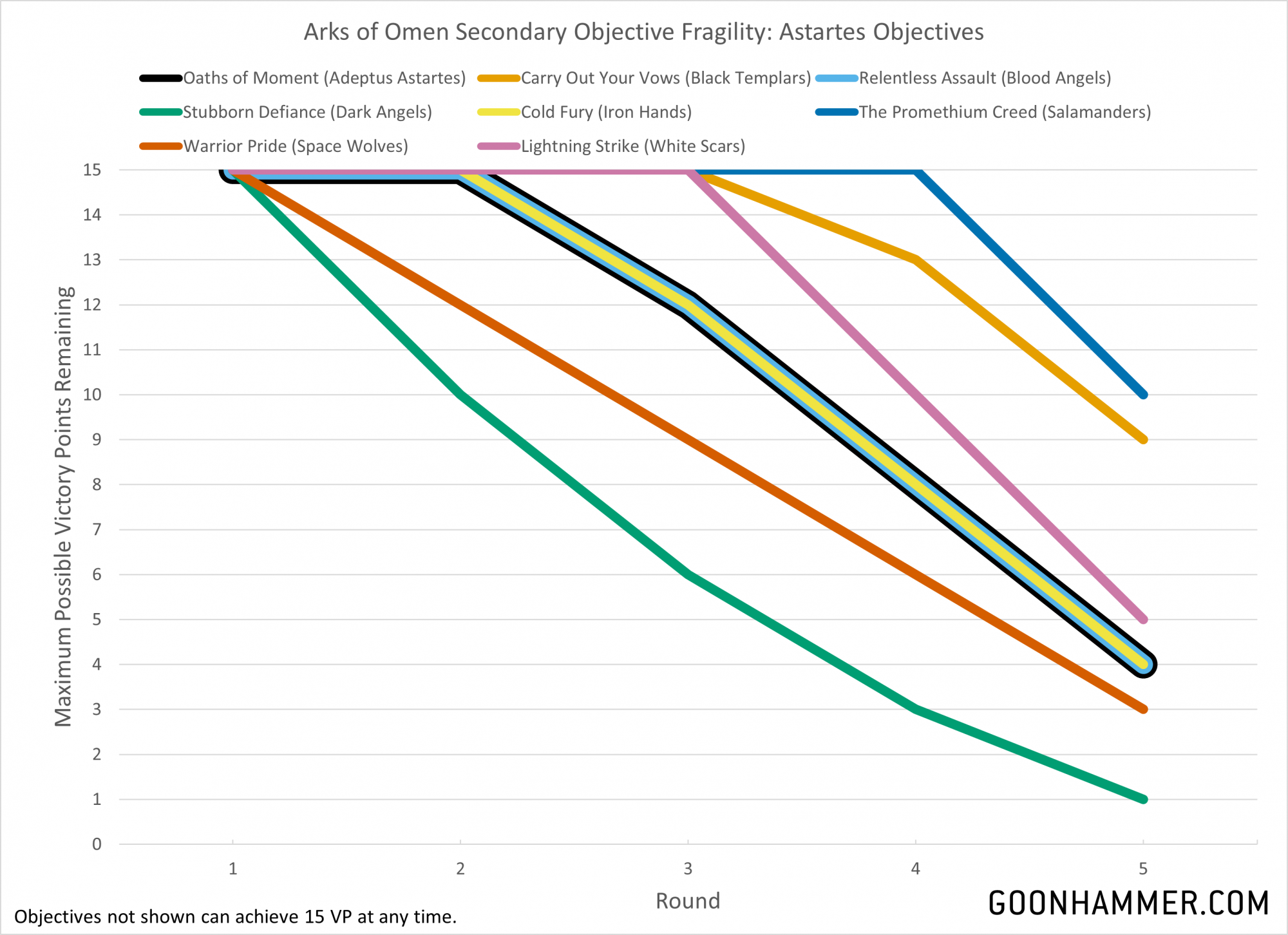 The loyalist Astartes secondaries run the range from extremely forgiving (The Promethium Creed for Salamanders) to harshly punishing (Stubborn Defiance for Dark Angels). Cull Order for Deathwatch, Bolster Barricades for Imperial Fists, Secure or Sabotage for Raven Guard, and We March for Macragge for Ultramarines are not shown because they can each achieve the full 15 VP even in the final round. Only Warrior Pride (Space Wolves) rides the Line of Intolerance, but Stubborn Defiance rides underneath it. This is because not only does this secondary require you to control a particular objective marker for the entire game, but the rewards escalate based on the number of consecutive rounds that the marker is controlled. The secondary is so unforgiving that you must have the ability to occupy the objective marker before your first Command Phase or you give up 5 VP. Ouch. Fortunately the generic Astartes secondaries are particularly resilient. 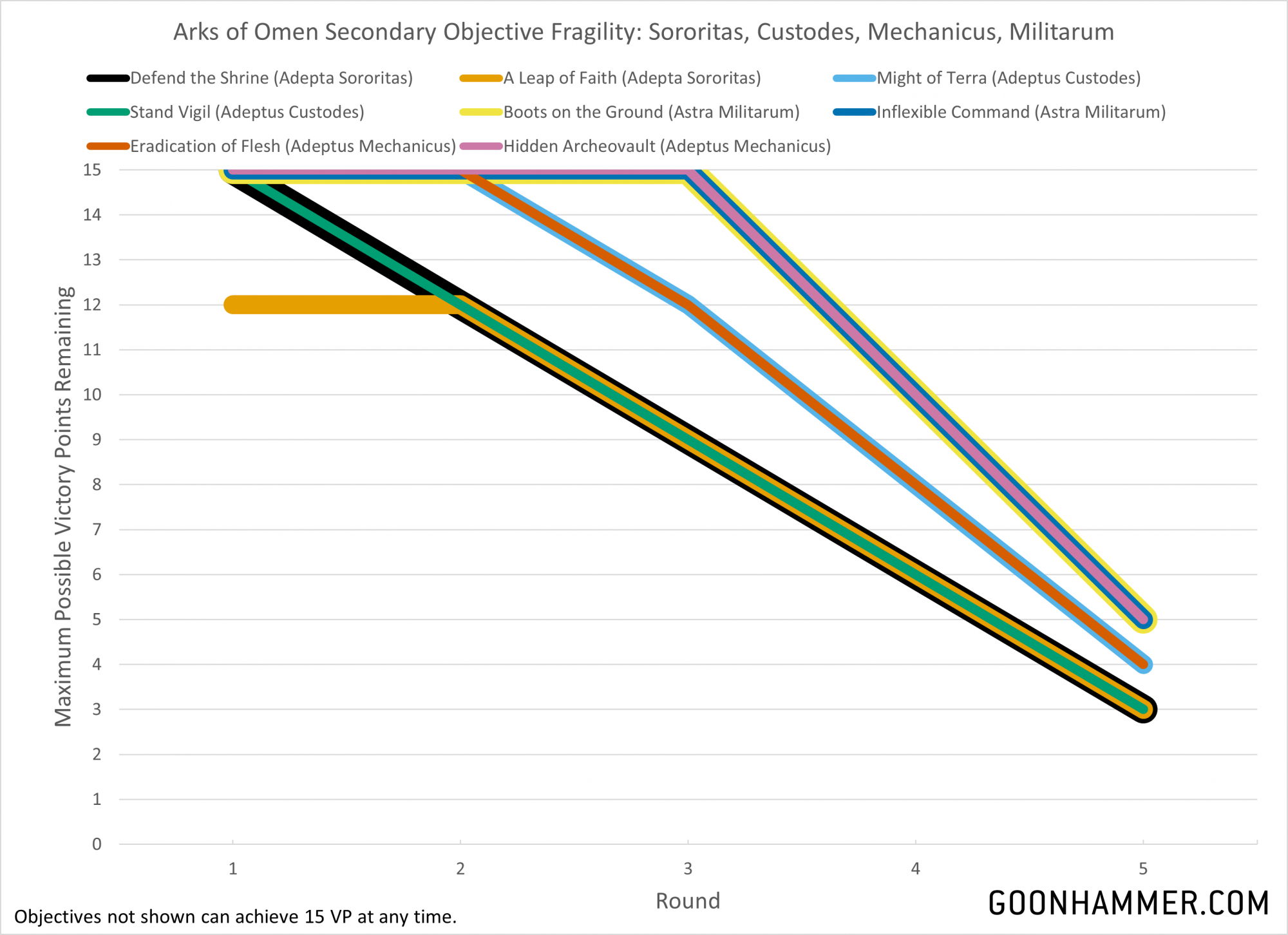 For the sake of expediency and my own sanity I clustered the other Imperium secondaries into multiple charts (the limitation was the Bang Wong color palette I use to maximize readability for color-blind individuals). First up we have the four “Adept” groups; Sororitas, Custodes, Mechanicus, and Militarum. Two of the Sororitas secondaries ride the Line of Intolerance, with A Leap of Faith falling underneath it in round 1 due to the 12 VP cap. For the Astra Militarum Boots on the Ground and Inflexible Command are fairly forgiving and still provide the possibility for 15 VP as late as round 3. All four armies here also have access to a faction-unique secondary which can achieve maximum VP in Round 5. 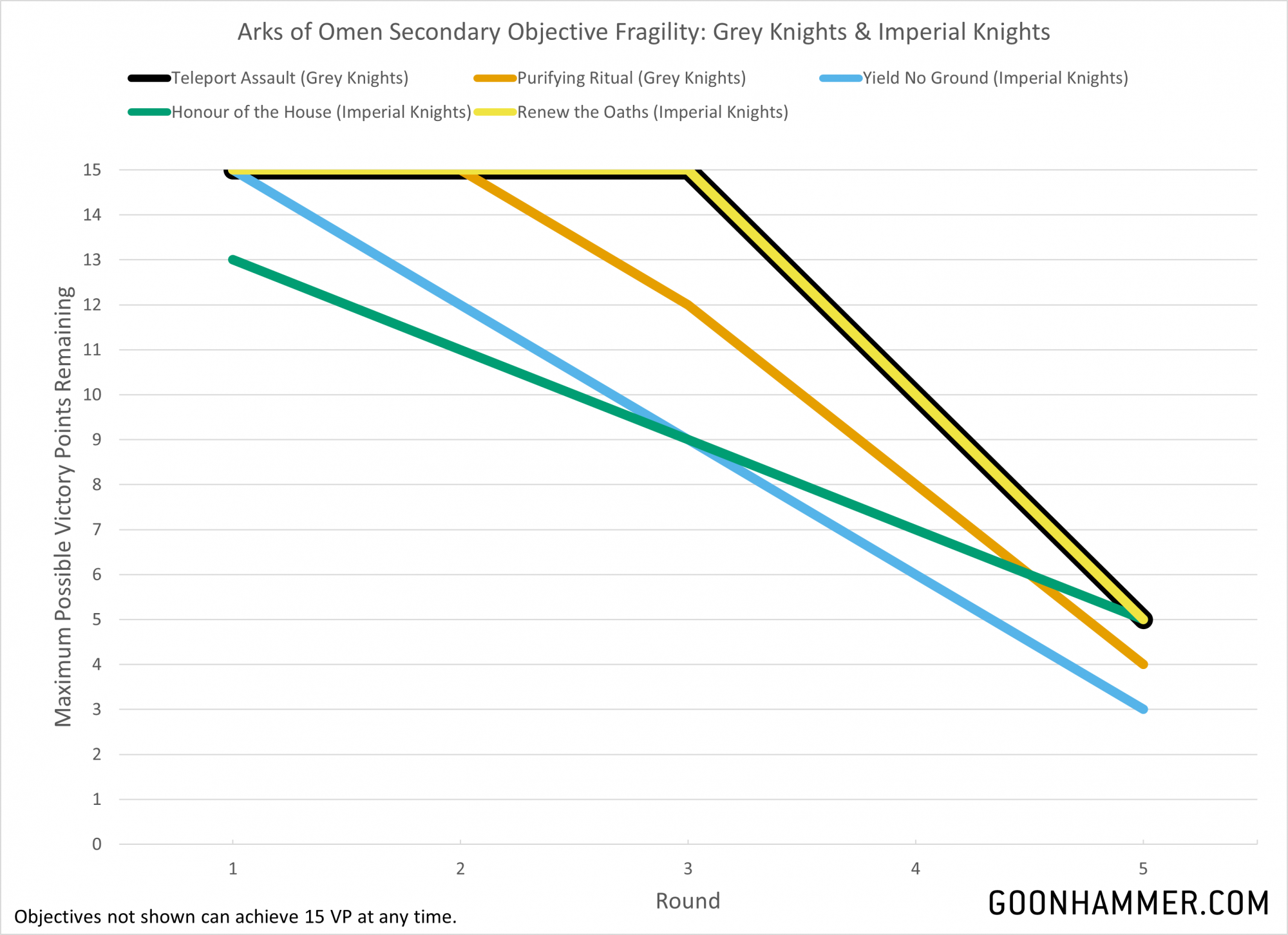 Curiously the Imperial Knights don’t have any faction-specific secondaries that can be maxed out in the final round while Honour of the House suffers from being capped at 13 VP. Grey Knights fare a little better, with all of their secondaries over the Line of Intolerance and Destroy the Daemon being maximizable at any round so long as the GK player is lucky enough to be facing daemons. Note that Grey Knights do not possess the ADEPTUS ASTARTES keyword and may not use the Space Marine secondaries. 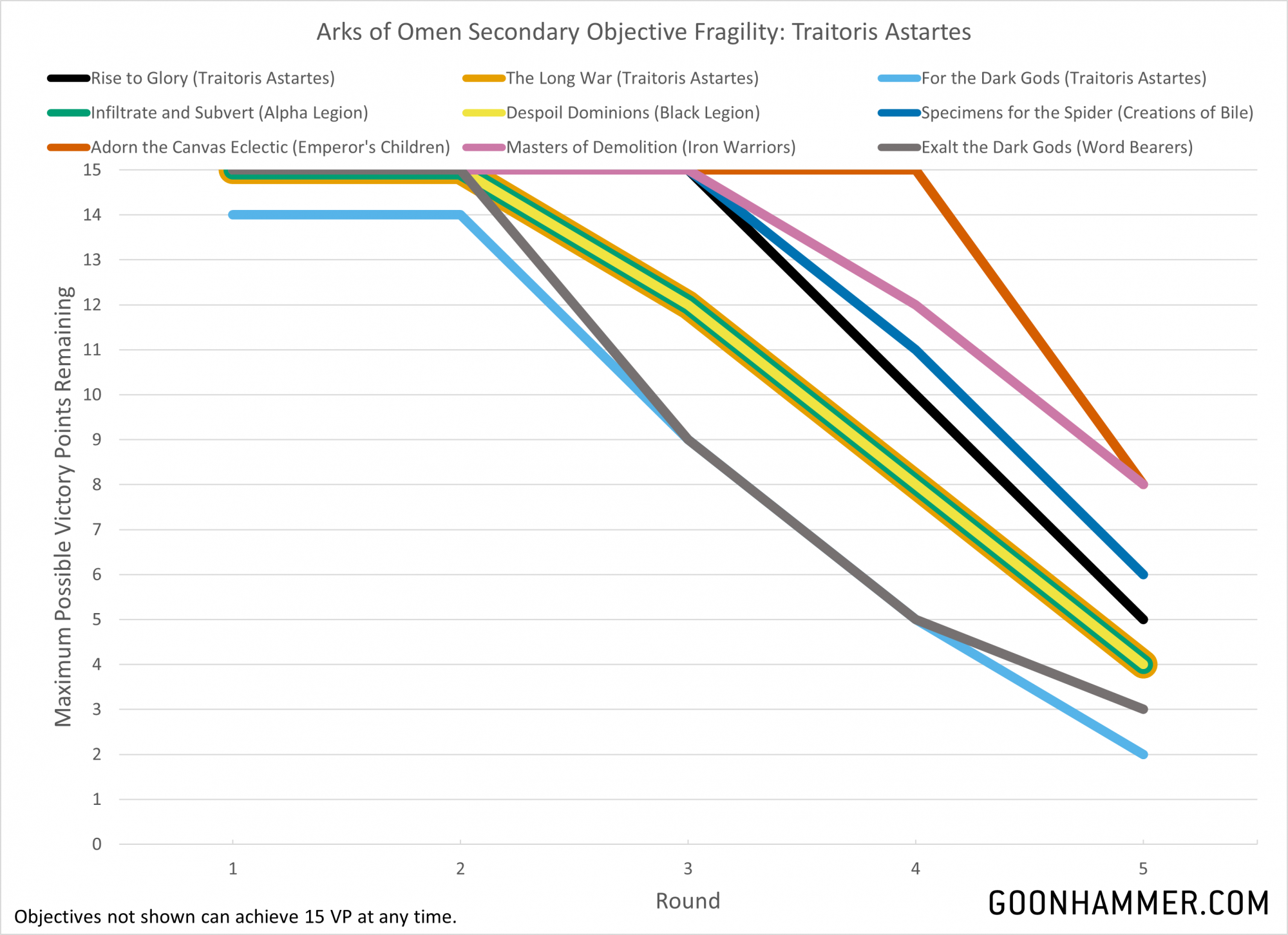 Traitoris Astartes cover a wide range of options, with Adorn the Canvas Eclectic for the Emperor’s Children being particularly interesting because of how it can activate in both player turns. For the Dark Gods and Exalt the Dark Gods are the most fragile due to their respective limitations on permitting only one unit to perform the relevant action each round. The Red Corsairs with Raid and Reave, Night Lords with Sow the Seed, Reap the Fear, and Black Legion with Despoil Dominions all have access to secondaries that are not capped. For the most part these offerings are fairly robust. 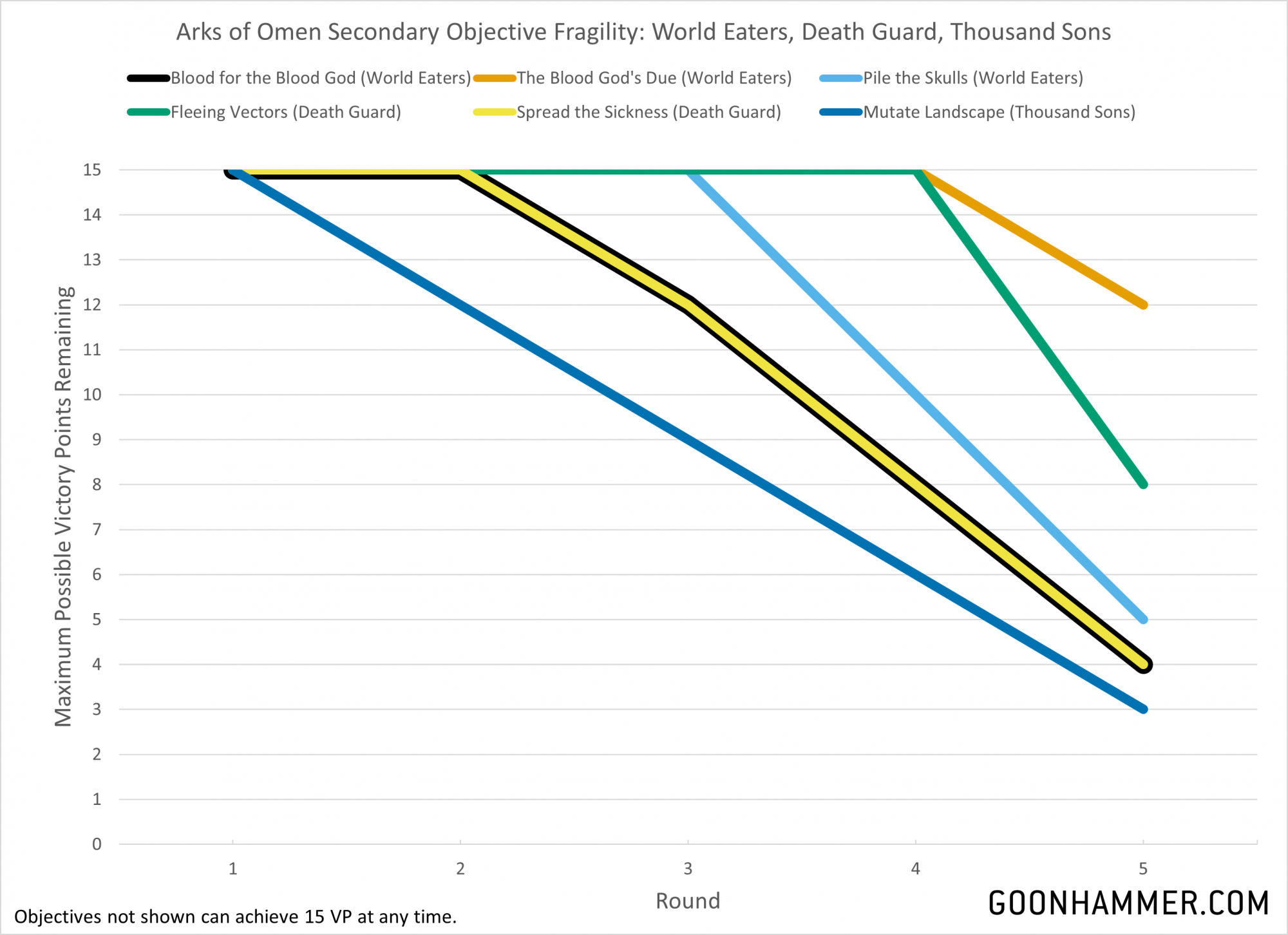 Much like how Grey Knights have SANCTIS ASTARTES, these respective chapters have unique keywords which prevent them from using the TRAITORIS ASTARTES secondaries. Instead they get a robust selection of options which fall above the Line of Intolerance outside of Mutate Landscape for Thousand Sons (another victim of being limited to one action per round). Worshippers of Khorne are in for a treat with how robust their secondaries are, not to mention the joy of being able to look your opponent in the eye as you casually explain that you will Pile the Skulls as you collect The Blood God’s Due. Honestly the secondaries alone are enough to make me consider starting an army. 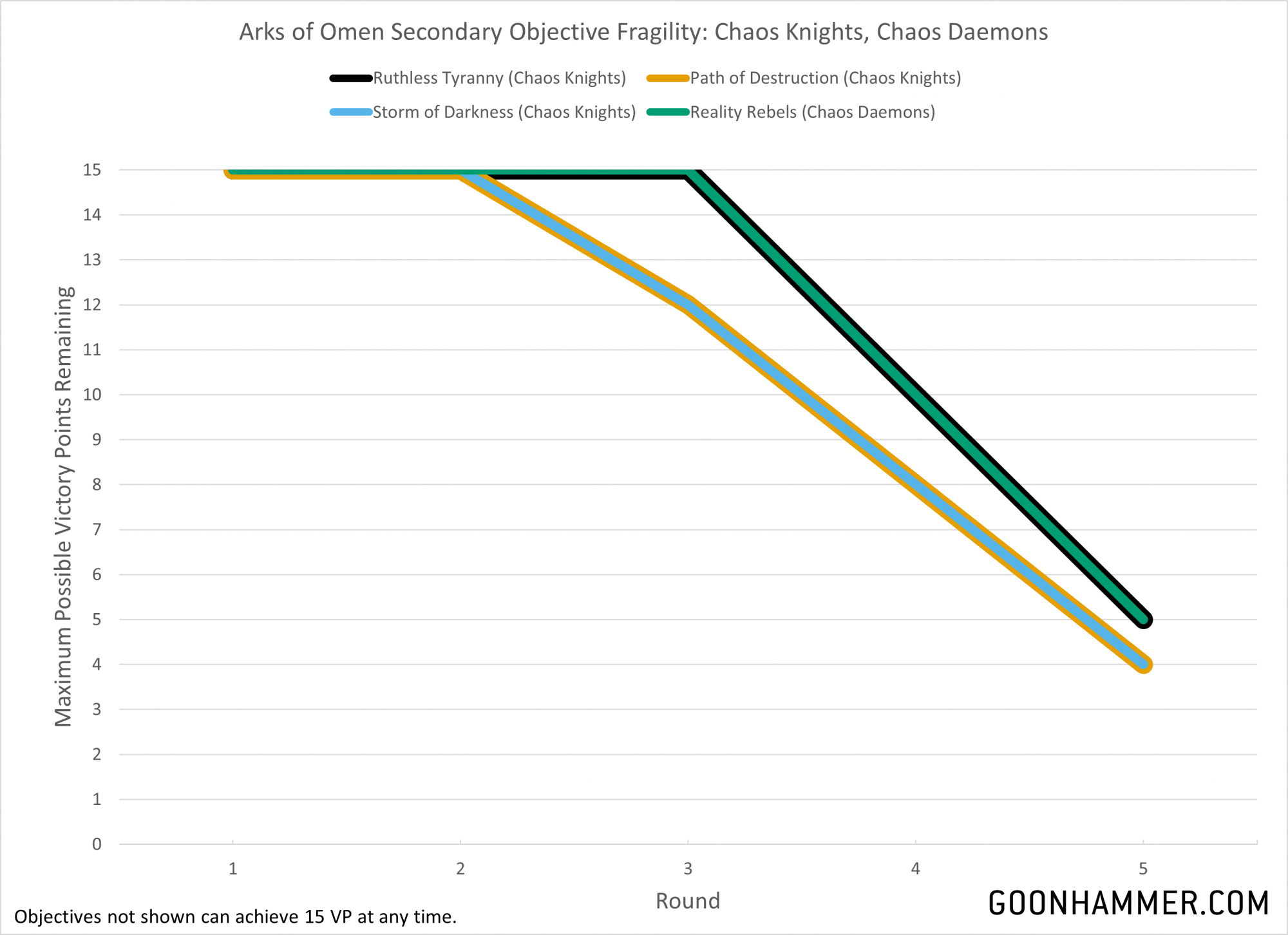 Chaos Knights and Chaos Daemons both have access to multiple robust secondaries, with the worst option for both armies still allowing a possible 12 VP by round 3. For Chaos Knights Storm of Darkness is a viable source of victory points so long as the Knight performing the action survives. While Reality Rebels lends itself to a horde army that can blanket the board, Chaos Daemons also benefit from Despoilers of Reality which allows multiple INFANTRY units to perform an action that’s worth 4 VP. The synergy there seems particularly nice. 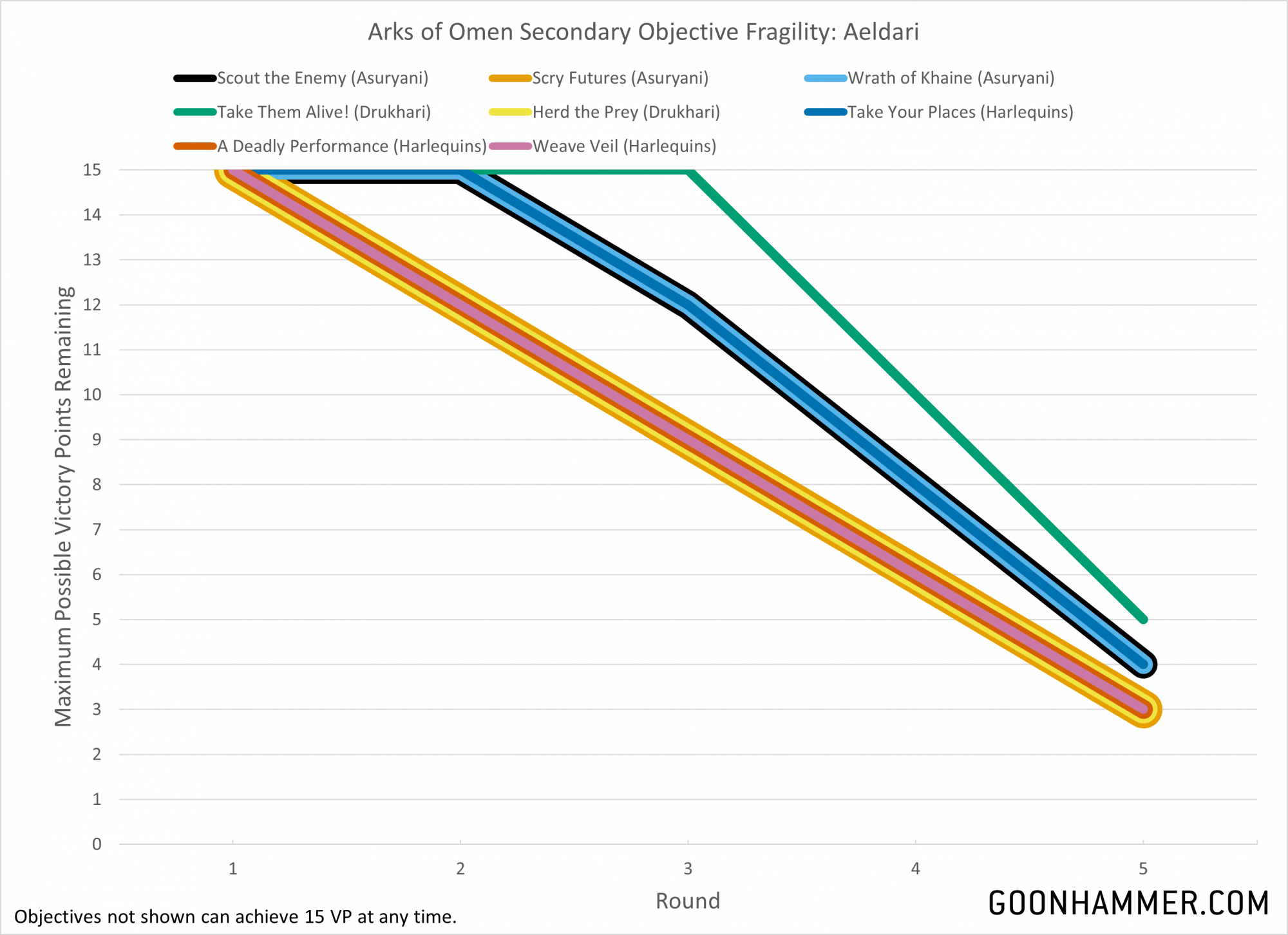 The Harlequin faction secondaries are the most fragile in Arks of Omen, with two riding the Line of Intolerance due to only being able to generate 3 VP (and only 3 VP) per turn. Asuryani fair a little better with Scout the Enemy in particular seeming accessible. Fear and Terror help the Drukhari since it’s theoretically possible to max out in any turn, but Herd the Prey can be challenging since at best you can score 3 VP per turn unless your opponent is actively avoiding putting a unit wholly within a table quarter. 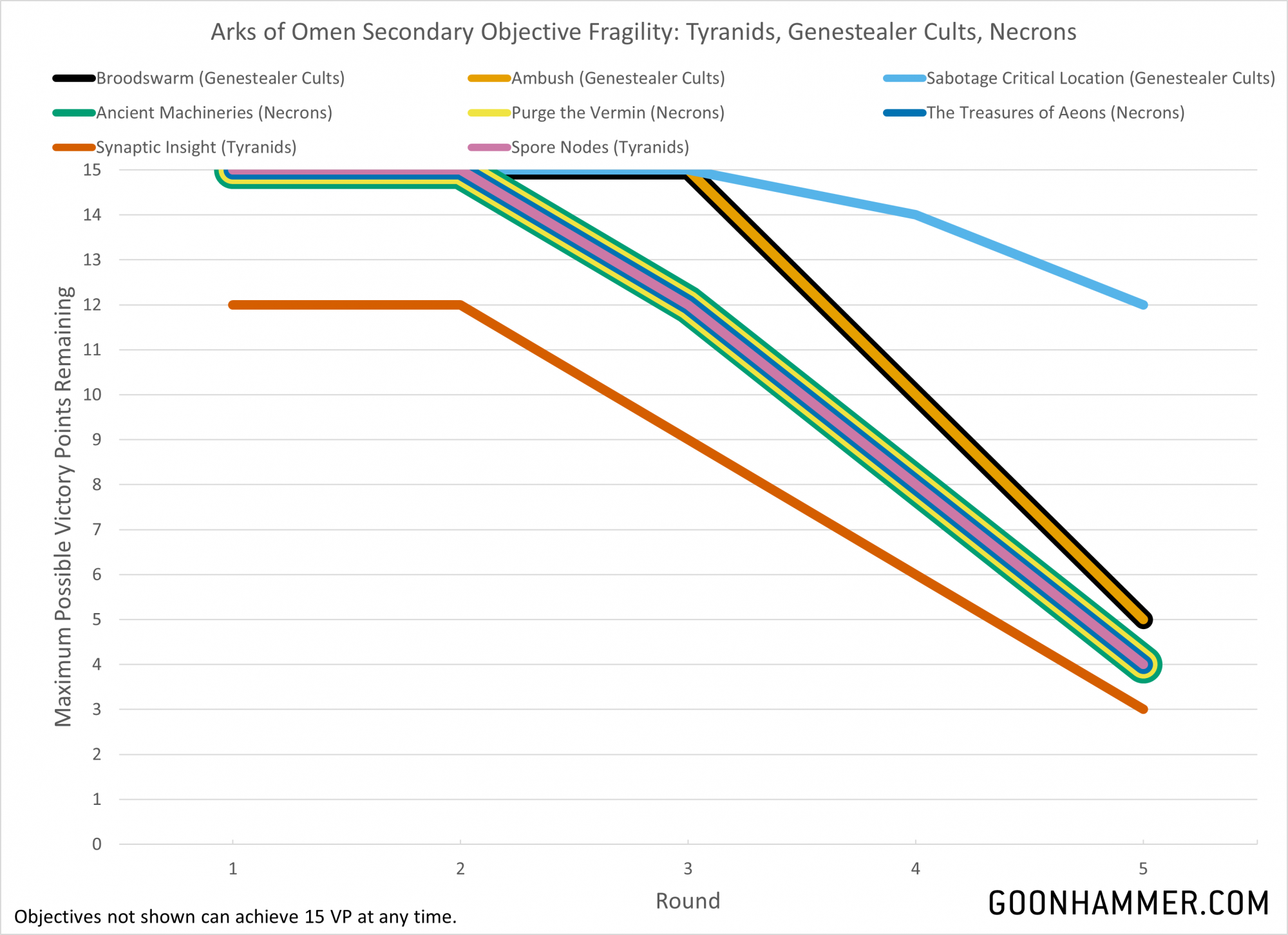 Tyranids get it particularly rough with Synaptic Insight falling below the Line of Intolerance thanks to the combination of a 12 VP cap and a limit of scoring 3 VP per turn. While they don’t have any faction secondaries which can max out VP in a single round, Sabotage Critical Location is actually a fairly robust secondary since multiple units can perform the action in a round and each success is worth 6 VP even in round 5. All three Necron secondaries follow the same trajectory of being able to max out VP in round before falling off, although this is somewhat deceptive for Purge the Vermin because that objective can’t be scored in the first turn. It also relies on your opponent obliging you by staying out of a table quarter, so maxing it out seems challenging. 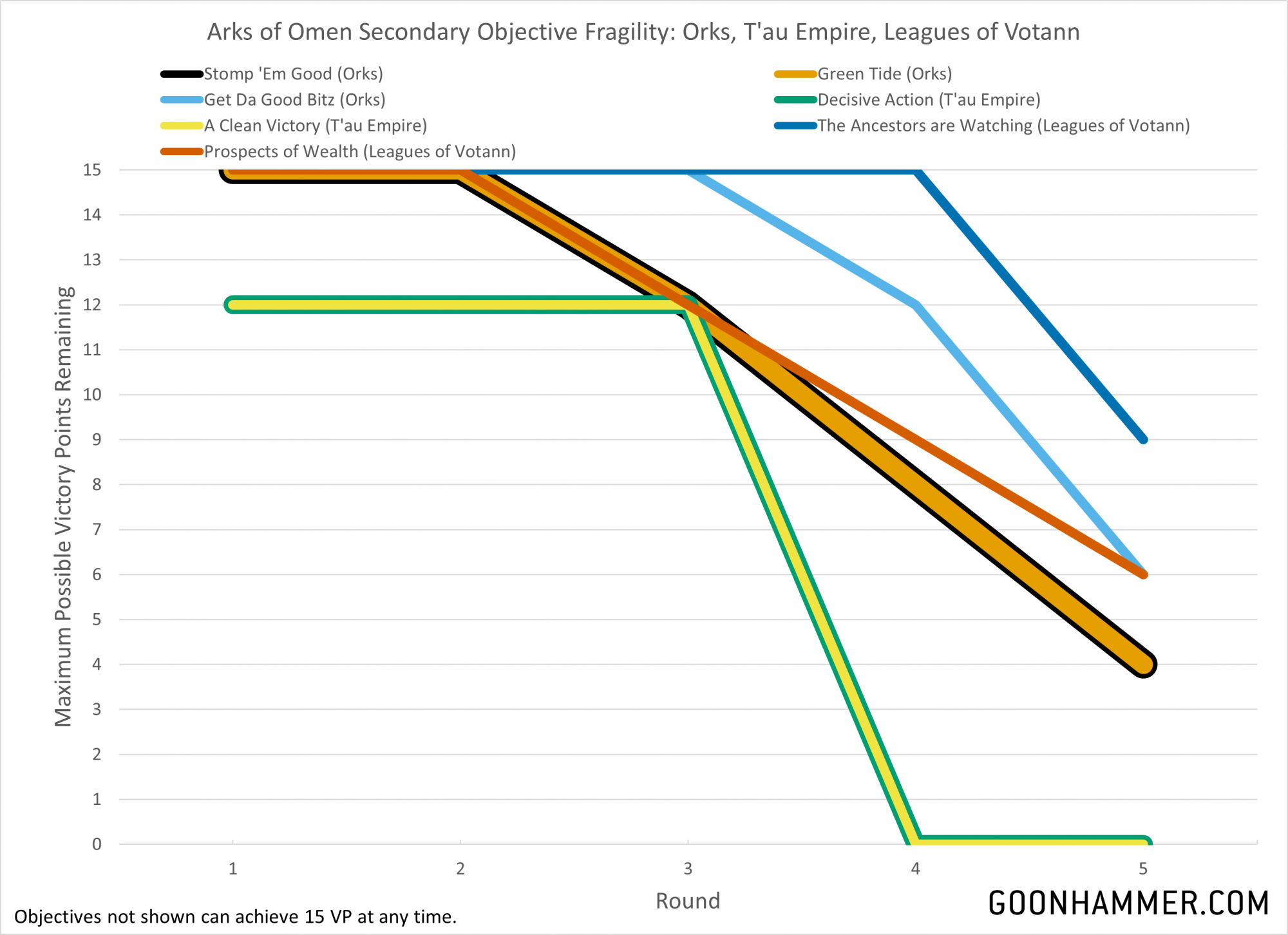 The final three factions feature some pretty powerful options for Orks and Votann and two of the extremely rough secondaries for the T’au. Starting with the bad, both A Clean Victory and Decisive Action are incredibly fragile as they can only be scored in three particular rounds, each depending on your army’s Tactical Philosophy. Fortunately this is at least somewhat offset by Aerospace Targeting Relays, which allows any number of INFANTRY units to perform an action and potentially even max things out in a single round. Orks have a really powerful secondary with Get Da Good Bitz which is not limited by the number of units that can perform an action per turn and can be performed multiple times on the same marker. Looting is good business. The Leagues of Votann have a few viable secondaries, particularly with The Ancestors are Watching which not only rewards you for killing things you already want to kill but it rewards you in multiple phases on both turns. Though note that you can also lose VP at the end of the battle for this secondary objective.

Rob: Reading through this led to some interesting thoughts. Most experienced players probably read this and thought there was at least one secondary objective that was perfectly good despite being fragile, and I think that’s a fair point to make – often your third secondary selection is less about what’s going to get you 15 points and what’s the least bad pick. What I think we can really learn from this is not that you should never take a fragile secondary, but that you should avoid making them part of your game plan, and you should pretty much never double up on them unless you’re in a matchup where you expect to dominate.

Ultimately that’s the rub: These secondaries are broadly fine until you’re in a losing situation or you’ve missed scoring them, and then suddenly you’re on the back foot and unable to make up the difference. If you just have one that’s not necessarily the end of the world – you can survive a tough game where you only score 9 on Grind – but if you’ve got two or three you’ll quickly find there’s no way to dig yourself out of the hole you’re in, especially in missions that have hold 1/2 scoring and are likely to lead to high primary scores for both players.

If you average out the maximum number of points per round you get a range of fragility values for each faction. On the very bottom are Harlequins, T’au, Necrons, and Imperial Knights thanks to their limited array of secondaries. At the top are Chaos Daemons, Deathwatch, Imperial Fists, and Raven Guard. Access to the powerful Astartes faction secondaries gives a boost to every Space Marine chapter. At the end of the day the mathematical potential of a secondary is only part of the equation; the viability of actually achieving those objectives, coupled with the ease by which a particular army synergizes with the available goals, will have a major impact on how things settle down.