Hammer of Math: Be’lakor and Friends

Last week we took a quick look at the Book of Fire from the Imperial side, this time we put our undivided attention on the vastly upgraded Be’lakor and the machinations of the warp that he can summon.

The First-Damned. Champion of Chaos Undivided. The first Daemon Prince, Be’lakor is ancient beyond comprehension and allegedly the most powerful of all mortals raised to exalted service of the Ruinous Powers. In previous editions this didn’t really mean much; a T6 8W character who could cast a few psychic powers and couldn’t hold a warpflame to the offensive capability of a decently tooled Smash Captain. With the release of the Book of Fire Be’lakr has received a MASSIVE upgrade, both in terms of size (just look at the picture above) and capability.

Offensively Be’lakor gets 6 attacks with a WS of 2+ and the ability to re-roll hit rolls of 1 (since he is DAEMON and within 6″ of himself) and has two profiles with The Blade of Shadows. The sweeping strike doubles the attacks and hits at S8, AP -3, and D1. The much nastier piercing strike hits at S12, AP -4, D1D3+3, and ignores invulnerable saving throws. The sheer number of options available to Be’lakor are amazing; as a unit with CHAOS, DAEMON, and all four Chaos gods as faction keywords he has access to every Stratagem available. He could use Locus of Grace for 1 CP to have every wound roll of 6+ produce a second attack, or Frenetic Bloodlust for 3CP to fight a second time at the end of the Fight phase. Or benefit from a Nurgle caster manifesting Virulent Blessing (WC 7) for +1 to wound and double damage on wound rolls of 7+.

Defensively he’s significantly harder to kill in this new incarnation. Be’lakor has a 4+ invulnerable save and subtracts 1 from the wound roll of all incoming ranged attacks thanks to his Immortal Vigour rule. On top of that, Shadow Form imposes a -1 penalty on all hit rolls and prevents them from being re-rolled. And of course he went from T6 and 8W to T7 and 16W, so a slight upgrade there. The first daemon prince also has access to the Blessing of Be’lakor Stratagem for 2CP which is applied after a failed save and changes the Damage characteristic of an attack to 0. The chart below shows a comparison to between Be’lakor and Mortarion assuming Mortarion is also imposing a -1 to hit on incoming attack rolls through Miasma of Pestilence. The really important threats are the Eradicators and the House Lucaris Knight Rampager; I tossed in Roboute because it’s funny to me how bad he is at everything. Note that the chart does not include the use of Blessing of Be’lakor, so in fact Be’lakor is even harder to kill than he appears below. The bottom line is that most things aren’t likley to kill Be’lakor in a single round. 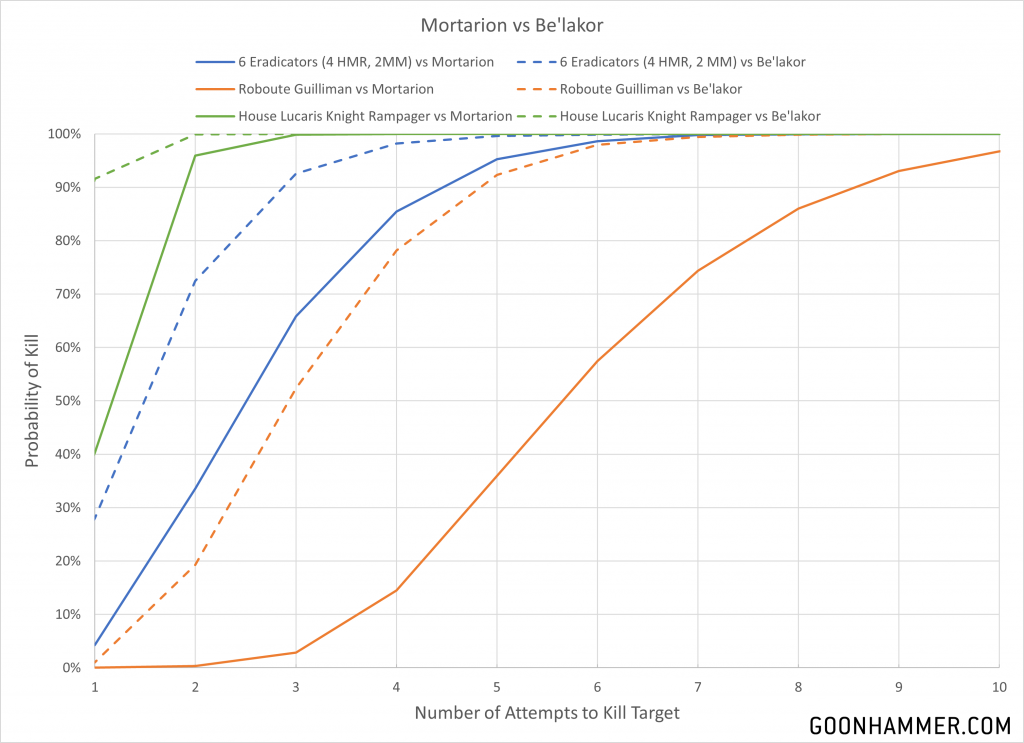 In addition to a huge upgrade for Be’lakor, Book of Fire includes some very cool psychic powers which have some unique effects. First up is Pall of Despair, a WC 7 power which has the player roll 3D6 and see if it beats the Leadership characteristic of a visible target within 18″. If it does then the player can cancel one aura ability, prevent a unit from performing actions (and cancelling an action currently being performed), or force the unit to fight last in the Fight phase. If the Psyker has the TZEENTCH DAEMON keyword then for 2CP they can use Locus of Conjuration to re-roll any failed Psychic tests. So how likely is the ability to go off? I put together a quick program on Anydice to make a comparison, and the results are below. You’re going to likely want to invest in a re-roll in some format to ensure a high probability of success, particularly against higher Leadership targets. Given the game-changing effect, such as forcing a major threat to fight last or denying an action at a crucial time, it could be well worth the investment. 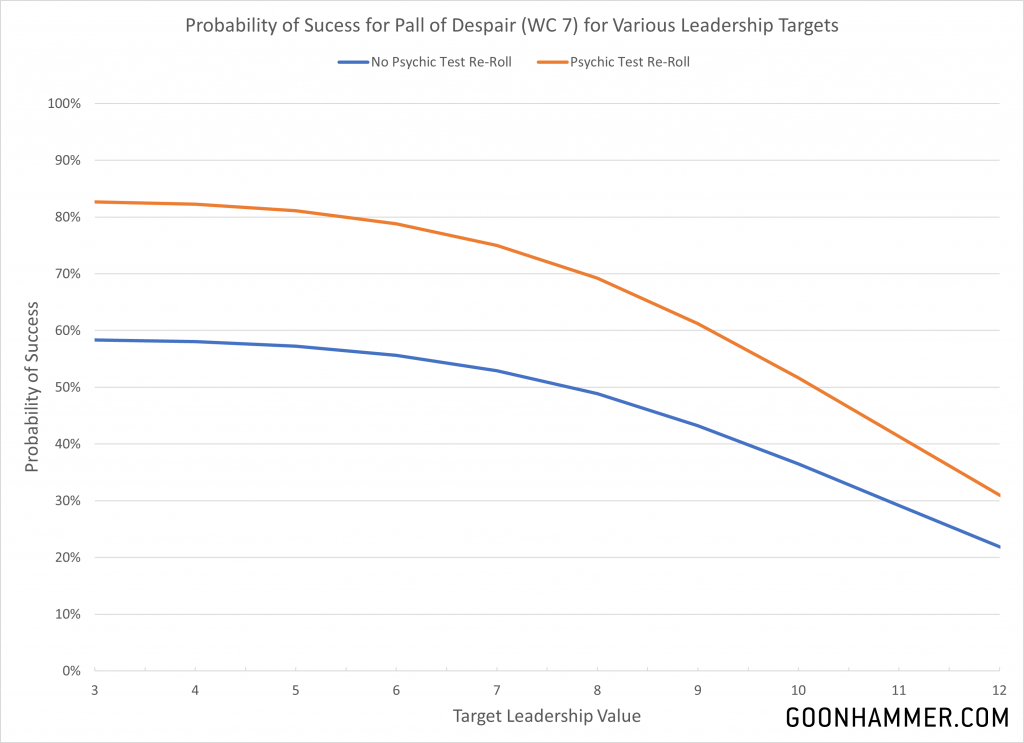 Another novel power is Betraying Shades (WC 6), which targets a visible enemy unit within 18″ and has the player select up to 6 models in that unit. The player adds together the unmodified Attacks characteristics of those models, rolls a number of D6 equal to the total, and if the Psychic test was 11 or more they add 1 to each dice result. For each result of 6+ the target unit takes a mortal wound. Historically these kind of powers have been fairly weak when compared to the basic Smite power, but the unique take based on the number of attacks is pretty cool. So how does it pan out? We can once again use AnyDice to do the math. The first challenge is the increased warp charge. Getting a 5 or better will happen 83% of the time; hitting WC 6 is 72%. From there you’re looking at between 12 and 18 attacks in order to achieve an average number of mortal wounds equivalent to Smite. In other words Betraying Shades will average more mortal wounds if you’re rolling 18 dice or more. 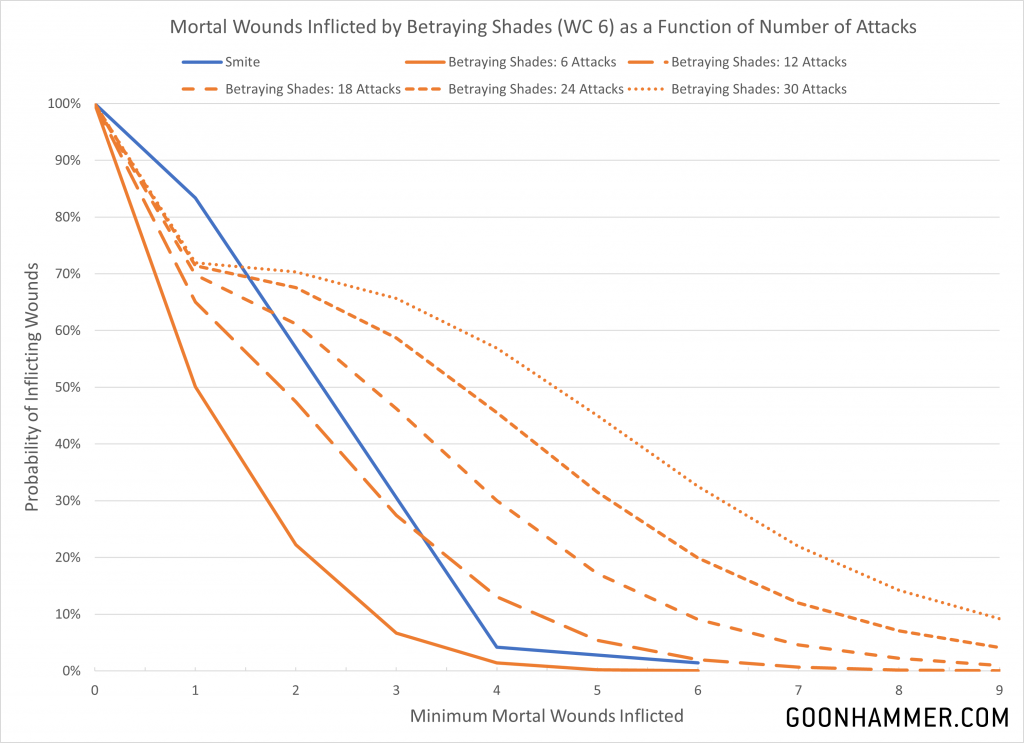 If You’re Not First You’re Damned

In addition to having an incredibly cool model, Be’lakor comes with some fantastic rules that really emphasize the power of the first mortal elevated to the ranks of Daemon Prince. If that weren’t enough, the Disciples of Be’lakor have some exciting rules and several innovative and viable psychic powers. It’s definitely a good time to worship the Ruinous Powers. Thanks for reading! If you have any feedback, feel free to drop a note in the comments below or email us at contact@goonhammer.com. If you have any questions that you would like answered in a future article like this one, please submit them here.