Primaris Kevin returns with a new Hammer of Math article, this time looking at the impact of different weapon modifiers on weapon output.

As one might expect from a game about elite tactical units fighting against one another, there are a ton of special rules and abilities pertaining to different attacks. We covered the attack sequence and the role of cover in our previous article, but Kill Team also contains several pages worth of special rules which can substantially impact the outcome of that sequence. There’s no better example of that than in the variations of the humble bolter.

With a profile of A4, 3+, D3/4 the basic bolter is fully capable of killing another Astartes in one (lucky) attack, but add on a few special rules and things change significant.

All of the weapons have an identical profile which allows us to investigate the effect of these special rules on the outcome of the attack. To calculate that I put together a small program which simulates 10,000 attack sequences under the specified rules. I automated the defense sequence as follows:

The sequence above maximizes damage reduction since critical hits only do 1 more point of damage than a regular hit, so the only time when using a pair of regular hits to nullify a critical hit makes sense is when there’s only one or fewer regular hits remaining.

We took a look at the distribution and mean damage dealt to a target with a 5+ save (Ork equivalent) and a 2+ save (Custodian). For a lightly armored target re-rolling the hit roll is the strongest approach, with the ability to re-roll results of 1 or 2 from the Relentless ability being the strongest of all and averaging over a full point of damage more than Ceaseless which only re-rolled results of 1. The low Save characteristic of the target made the abilities which focused on critical hits or reducing Defense less effective. In general any bonus is a significant improvement over the baseline bolter, improving the mean damage inflicted by at least 10%. 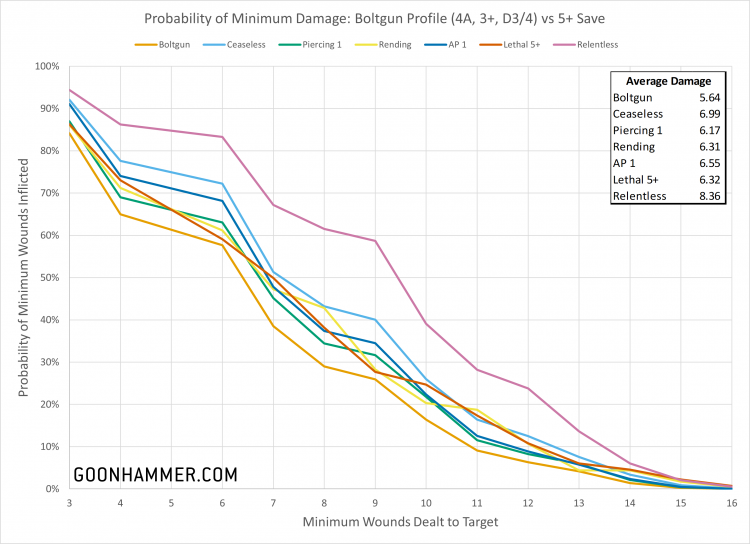 The results below show the effect against the target with the high Save characteristic. Note that the x-axis is on a different scale (stopping at 12 instead of 16) since the values on the far right are practically 0%. Once again Relentless is the most effective choice, with AP 1 in second place thanks to the ability to reduce the Defense dice by 33%. As with the 5+ save chart any special ability provides a significant improvement in average damage, adding at least 30% more damage compared to the standard bolter profile. 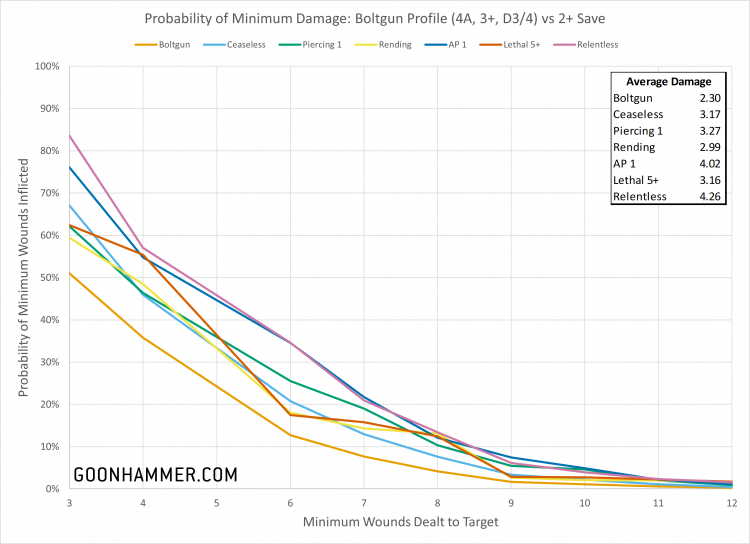 So why is the common re-roll much more effective than specialized options like Piercing or Lethal? The reason is because of how fundamental the results of the hit roll are to the outcome of the attack sequence. Every failed hit roll is a save that the opponent doesn’t have to make. Re-rolling 1 in every 3 dice improves the probability of hitting from 66% to 89% and improves the probability of achieving a critical hit from 17% to 22%. It’s effectively getting a bonus to hit and a partial Lethal effect wrapped up in one. Armour Piercing is effective for the same reason; it’s a reliably reduction of the target’s defenses. The difference is that where the efficacy of AP depends on the target, re-rolling failures is always beneficial. In contrast abilities like Rending or Piercing suffer from having a low chance of activating since they rely on critical hits.

I also thought it might be fun to look at how a few special weapons available to the Astartes would do against a target with a 2+ save. The meltagun has an A4, 3+, 6/3 profile with a 6″ range (I refuse to use the dumb symbols), AP 2, and 4MW (meaning it automatically deals 4 mortal wounds on a critical hit). Plasma guns have a 4A, 3+, 5/6 profile with either AP1 or your can supercharge for AP2 but the Hot rule applies (meaning every discarded hit roll of 1 deals 3 mortal wounds to the firer). And then there’s the grav-gun, which has a 4A, 3+, 4/5 profile with AP1 and the Grav ability. If the target has a 3+ or better Save characteristic then the grav gun has a Lethal 4+ profile. Ouch.

The results below are pretty interesting. If you can get within 6″, the combination of mortal wounds and AP 2 means that a meltagun can be absolutely devastating and has a 25% chance of killing even a Custodes in one shot. If the Custodes is wielding a storm shield with a 4+ invulnerable save then things are less impressive. The plasma gun strikes a nice balance between risk and reward, dealing a healthy amount of damage even without the benefit of AP 2. The grav gun is particularly interesting thanks to the ability to get critical hits on a 4+ against heavily armored targets, although the flexibility of the plasma gun may make it more appealing. 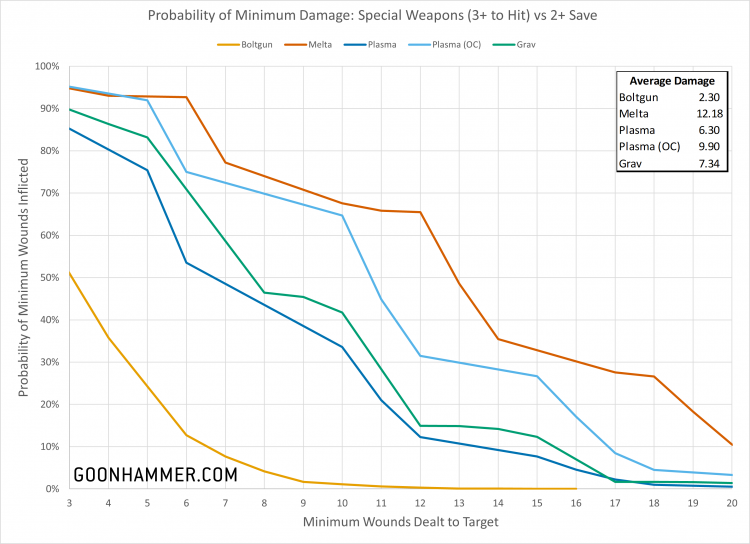 I hope this article provides a bit of insight into the effects of different special rules and how they can impact the attack sequence. Kill Team 2 looks to be a very exciting and dynamic game. There are a lot of tactical options that should make players excited, and the core game contains a lot of modern elements that will keep everyone engaged and interested at every point. On the Astartes side it makes perfect sense that the faction from which the game is named after would do so well; Deathwatch Veterans have ample access to special weapons and plenty of storm bolters to cut down their opposition.