Hammer of Math: Calculus of the Damned

In this week’s Hammer of Math, Kevin and Rob take a look at some of the possibilities within the latest Psychic Awakening Book, Ritual of the Damned, and how they impact the forces of the Thousand Sons, Grey Knights, and our beloved Dark Angels. In case you missed our reviews of the upcoming book and what it means for each faction, you can find our round-up here.

Ritual of the Damned is a cheerfully titled tome that provides a much-needed boost to some of the forgotten factions of the 40K universe, and also Thousand Sons. Contained within are a host of new powers, abilities, Relics, and Stratagems for the Thousand Sons, Grey Knights, and Dark Angels. All three of these factions have been suffering a bit as of late (or for all of 8th edition) and so it’s nice to be able to dig in and see what kind of a boost these powers provide.

First previewed on the Warhammer Community site, this Relic is huge. There are very few abilities in the game which directly alter a die roll like this, and The Capricious Crest is particularly interesting because it has the ability to take the worst possible roll and covert it to the best, either in offense or defense. Note that since the power is once per turn you can use it twice each Battle Round; once in your Psychic phase and once in your opponent’s. But what does this mean mathematically?

As we can see below the impact is significant: On your side, the chance of success on powers skyrockets, with a warp charge 9 power succeeding half the time – very handy given how high the warp charge cost on many of the Discipline of Change powers is. Note that because the effect is not locked to a particular Cult, this can also be used to help Sorcerers in the Cult of Magic or under the influence of abilities that give them a +1 to their attempts to manifest a power. The effect against opponents is equally impressive, especially when combined with Deny the Witch. Finally, if you’re worried about turning a double 1 result into a 12 and still suffering a Perils result, the new Adepts of the Immaterium Stratagem will, for 1 CP, allow you to ignore the Perils result. This is an incredibly powerful Relic and one that should see extensive use. 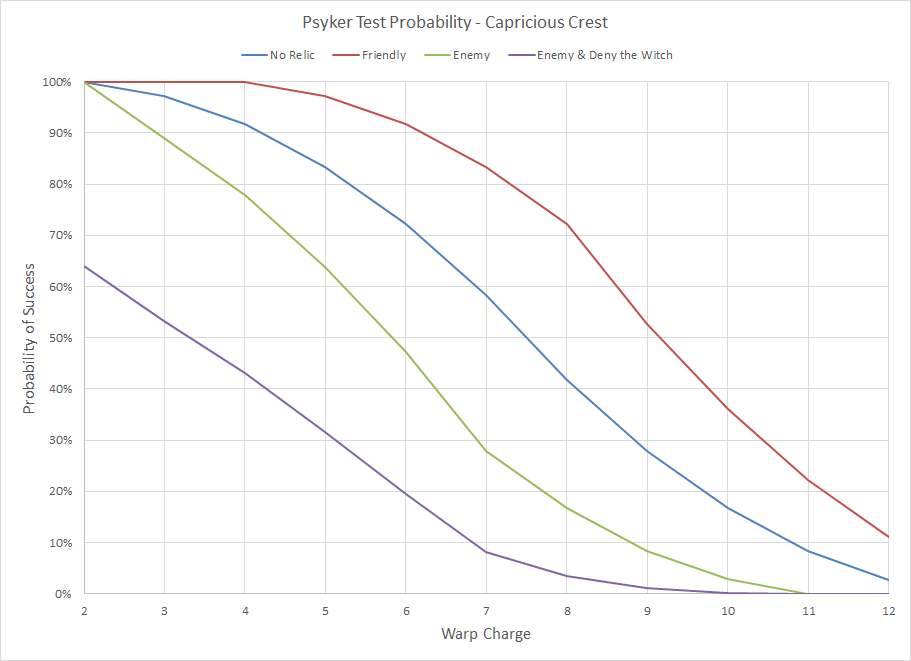 The Grey Knights received a much-needed boost as well in the form of new powers and Stratagems. The Empyric Surge Stratagem, also previewed on Warhammer Community last week, gives Grey Knight armies a significant boost when clumping together, particularly since Grey Knights can spam Smite without penalty thanks to their Brotherhood of Psykers ability. When combined with the Tide of Escalation Tide which adds an extra point of damage to the “baby Smite” cast by units with Rites of Banishment, you establish the ability to reliably unleash a healthy number of mortal wounds, especially if you can put 2 or 3 units in place to benefit from Empyric Surge. 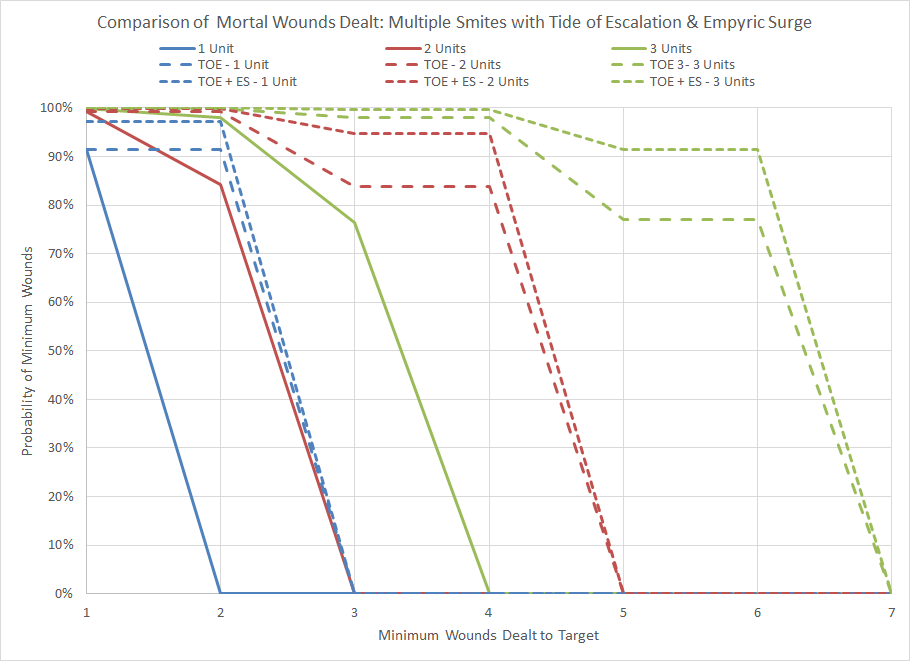 Empyric Surge also provides a good boost on the damage output of units which cast a regular Smite, as the +2 bonus provided with the combination of Brotherhood of Psykers increases the chance of dealing 1d6 mortal wounds. 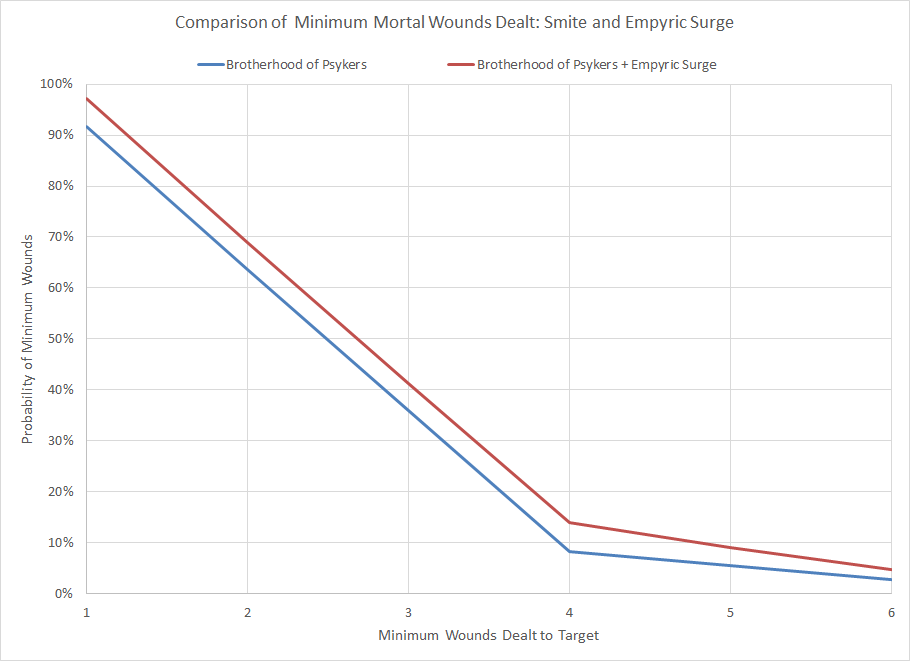 Dark Angels needed an update as much as any faction in the game, and bringing them in line with codex Space Marine forces with Doctrines and Stratagems is a big win. We previously excluded Dark Angels from our Smash Captain Thunderdomes. But now that they have access to new stuff, it’s finally time to see what a Dark Angels Smash Character can do. Warlord Traits like Lay Low the Mighty and Litanies like Mantra of Strength provide the kind of boosts to damage, strength, and attacks that we have seen other Smash Captains use to great effect. And the incredibly flavorful (and fun) Lion and the Wolf Stratagem helps even more. Unfortunately until the Space Wolves get their time in Psychic Awakening (and with it, the Angels of Death rule) this combination won’t be legal, as until then they won’t have access to Doctrines and the Dark Angels will lose their bonus AP if they include any Space Wolves units in the army. 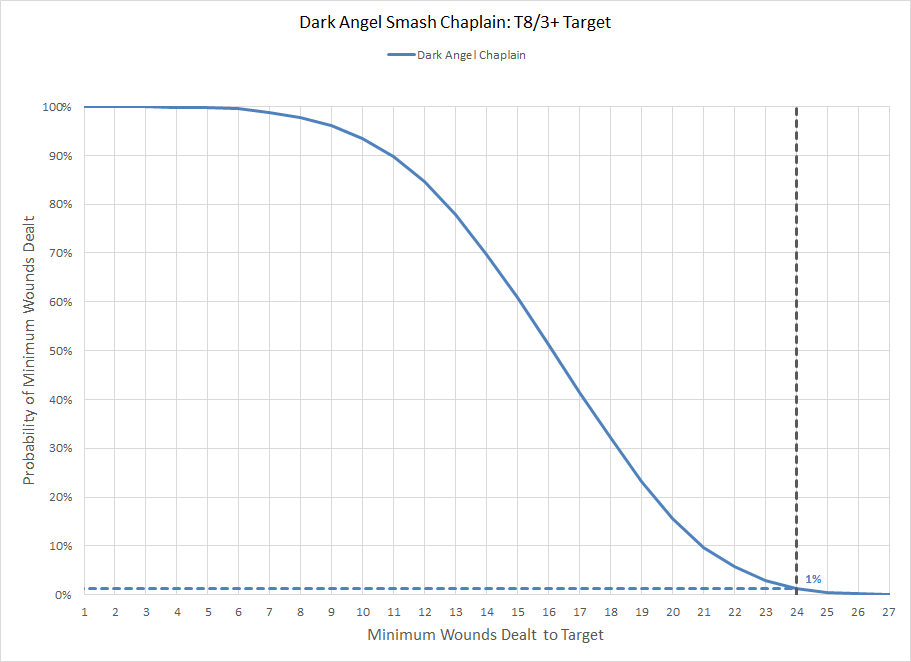 A 3% chance of killing a Knight isn’t great, but it’s not as horrifying as some of our previous examples. Unfortunately the major issue here is the lack of fixed damage; on average 1d3+1 is equivalent to a basic thunder hammer. Most of the really lethal builds deal four or even five points of damage on each swing. On the other hand it’s a massive improvement over what Dark Angels had before, and it has a great chance of killing lighter threats like Repulsors.

This looks like an incredibly exciting update, with a lot of improvements to three factions that definitely needed some help. Thousand Sons, Dark Angel, and Grey Knight players will definitely enjoy their new toys. I’m excited to see what they do.

One last thing; I wanted to give kudos to Reddit user Uily who just released the awesome 40K Stats Engine. This thing is awesome and lets you do predictive analysis of wound distribution in a really useful and accessible format. It’s amazing what happens when people who actually know what they’re doing take on a challenge. Great job, and I look forward to using it!