This week’s Hammer of Math continues to ride the wave of new GW releases for 40k and takes a look at the piety and potential of the new Codex: Adepta Sororitas.

Apparently the flood gates have been opened at Games Workshop Headquarters and players are being inundated with new rules and books. This week has seen the release of the new rulebook for the Adepta Sororitas, and it’s a very exciting book to read. Like most of the modern GW offerings, the Sisters of Battle combine an incredibly dynamic and detailed model range with an impressive ruleset. In 9th Edition this includes several approaches which go slightly against the grain of other armies. We’ll cover three of them in this article; the powerful denial ability of Shield of Faith, the lethal potential of Blessed Bolts, and the absolute insanity of Morvenn Vahl.

Models with the Shield of Faith ability are blessed with an innate ability to Deny the Witch as if they were a PSYKER, but instead of rolling 2d6 and trying to beat the result of the Psychic Test they only get 1d6. What’s new is that, in addition to passing DtW if the roll is higher than the result of the Psychic Test, the roll also passes on an unmodified 6. Should the Aegis of the Emperor Sacred Rite be active instead then the result only has to be a 5+. This means that regardless of the Psyker the Adepta Sororitas are guaranteed to deny the power 17% of the time and potentially could do it one third of the time. That’s an immensely powerful ability. I took the liberty of running a calculation to look at the cumulative effect on AnyDice, and the results are charted below. Against a power of WC6 or higher the bonus provided by the Sacred Rite actually makes the Sororitas ability better than a Deny the Witch from a Psyker, thanks to that fixed 33% probability of success. Given the 24″ range of Deny the Witch it’s likely that any army that relies on psychic attacks is going to be severely hampered, especially since after all of that the Sororitas player can also apply Purity of Faith for 1CP for another chance to deny the power on a 4+ if they’re within 24″ of an ADEPTA SORORITAS unit. 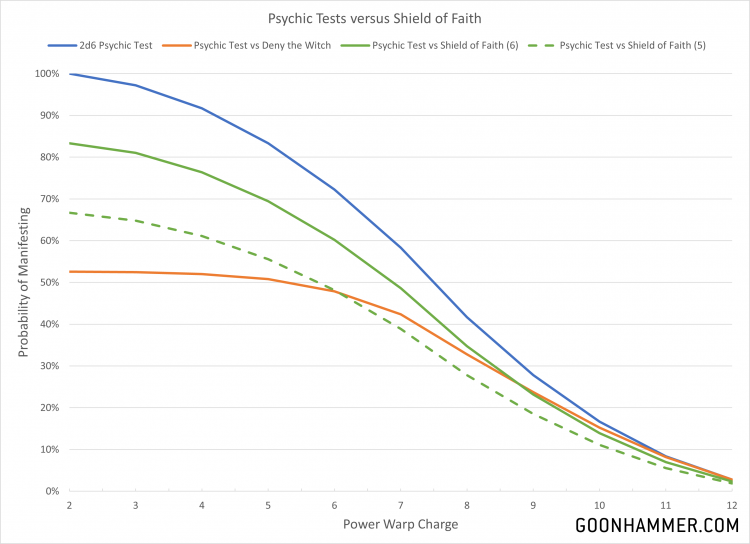 For 1CP Adepta Sororitas players can use the Blessed Bolts Stratagem to allow a ADEPTA SORORITAS unit armed with artificer-crafted storm bolters to deal 2 mortal wounds on an unmodified hit roll of 6, to a maximum of 6 mortal wounds. Artificer-crafted storm bolters are considered a special weapon and are available to Battle Sisters Squads (2 per 10 models), Celestian Squads (up to 2), or Dominion Squads (up to 4). As Rapid Fire 2 weapons with a 24″ range, a fully equipped Dominion Squad or 20 model Battle Sisters Squad would get 16 shots at a target 12″ away. Not bad for 80 points in a 5 model squad of Dominions. For the chart below I looked at the probability of getting at least 1, 2, or 3 sixes given either 2 or 4 storm bolters. The numbers are pretty convincing; for 1 CP a kitted out Dominion Squad has a better than even chance of dealing the limit of 6 mortal wounds to a target. Add a re-roll and the number skyrockets. Even a pair of storm bolters has an 81.6% chance of getting at least 3 sixes if all results of 1 or 2 are re-rolled thanks to the presence of a bonus like Morvenn Vahl, and against an appropriate target players might want to re-roll all results of 5 or less to guarantee those mortal wounds. Against a hardened target where a S4 AP 0 shot may not do much it’s an optimal play. 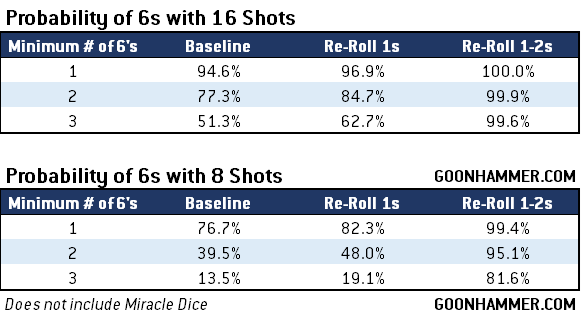 As befitting a High Lord of Terra, Morvenn Vahl comes with some absolutely incredible abilities and equipment.  It’s actually pretty depressing how much better she is than an actual Primarch. Defensively she’s harder to kill than Guilliman against anything that deals more than a single point of damage (particularly when you take into account Miracle dice), but where things are particularly egregious is when you compare the extent to which she enhance surrounding units. The first article I wrote in this series was on how modifiers and re-rolls modify the probability of success, and when re-rolls are stacked the results can be significant. A flat re-roll of 1 increases the probability of success by 17% regardless of the original probability, since 1 in 6 rolls you will always try again. Modify two rolls in that way and the improvement is 36% (7/6 * 7/6), which is what Morvenn Vahl does to every CORE unit within 6″ thanks to her Abbess Sanctorum (Aura) ability. On top of that she can use Commander of the Adepta Sororitas to enhance that bonus even further by allowing a unit to re-roll any hit or wound rolls in an attack (and she gets that ability herself thanks to her Warlord trait). We’ve already seen the effect that has on just the hit rolls with Blessed Bolts, but it can extend to any CORE or CHARACTER unit. The effect increases the worse the original probability is. For example a unit with a typical profile of a 3+ to hit and 3+ to wound will see a 77% increase in average output; make it a 4+ to wound and the presence of Morvenn Vahl effectively makes one unit count as two. This kind of force multiplication is something we’ve seen GW go away from with other factions, so to see it emphasized here in such a resilient unit is surprising.

The new Adepta Sororitas book is full of new, innovative rules and a lot of gorgeous models to use them with. At its core the new book seems to impart a source of reliable enhancements. The new Shield of Faith rule presents a significant threat to armies which depend on psykers, while Blessed Bolts offers a reliable source of mortal wounds. The epitome of this concept can be seen in Morvenn Vahl, with every CORE unit nearby immediately becoming 36% more effective and one unit getting an even larger boost. It’s a very exciting book, and I’m looking forward to seeing how it all works out.