This week’s Hammer of Math runs screaming in terror from the organic onslaught that is the new Crusher Stampede Army of Renown.

If Space Marines are the most iconic component of Warhammer 40k, the second most iconic thing in the universe must be giant, terrifying monsters for the Space Marine to kill and/or heroically get crushed by. Tyranids are a wonderful source of big nasties, but between having an older Codex and the reduction in variation of anti-tank weapons like meltaguns it’s getting harder and harder for anything without an invulnerable save to survive (and even that’s not guaranteed to be safe anymore). Enter the Crusher Stampede, an Army of Renown that encourages lots and lots of monsters with a series of very nice bonuses. Assuming you’re okay with only fielding units with three or more wounds (and sadly no swarms), and having at least as many MONSTER units as non-MONSTER, then you can benefit from a pretty impressive set of bonuses.

Crusher Stampedes provide four bonuses: A very strong replacement for the Hive Fleet Adaptation, new Warlord Traits, awesome Stratagems, and a brand new psychic discipline. In lieu of a Hive Fleet Adaptation, Crusher stampede units all gain access to a 5+ invulnerable save. MONSTER units also reduce all incoming damage by 1 (minimum 1) and count as a number of models equal to the remaining Wounds for the purpose of controlling Objective Markers. Combine that with Hive Fleet Leviathan (which is practically the default choice at this point) and the results are pretty cool.

The impact of getting a 5+ invulnerable save (a 5++) and damage reduction is considerable. High AP weapons like plasma and melta guns typically eradicate the 3+ save most Tyranid monsters have, and while the 5+ Feel No Pain provided by Catalyst is fantastic it’s limited to a single unit. So how much harder to kill are units with the Hulking Behemoths rule? Going from no save at all to a 5+ effectively increases the number of wounds on the model by 50%, while the influence of damage reduction is obviously dependent on how much damage each attack inflicts. The chart below compares the wounds inflicted by roughly equivalent points of Eradicators with heavy melta rifles at half range, Hellblasters with assault plasma incinerators, and the new Hammerhead railgun profile assuming that the 3+ BS is unchanged. 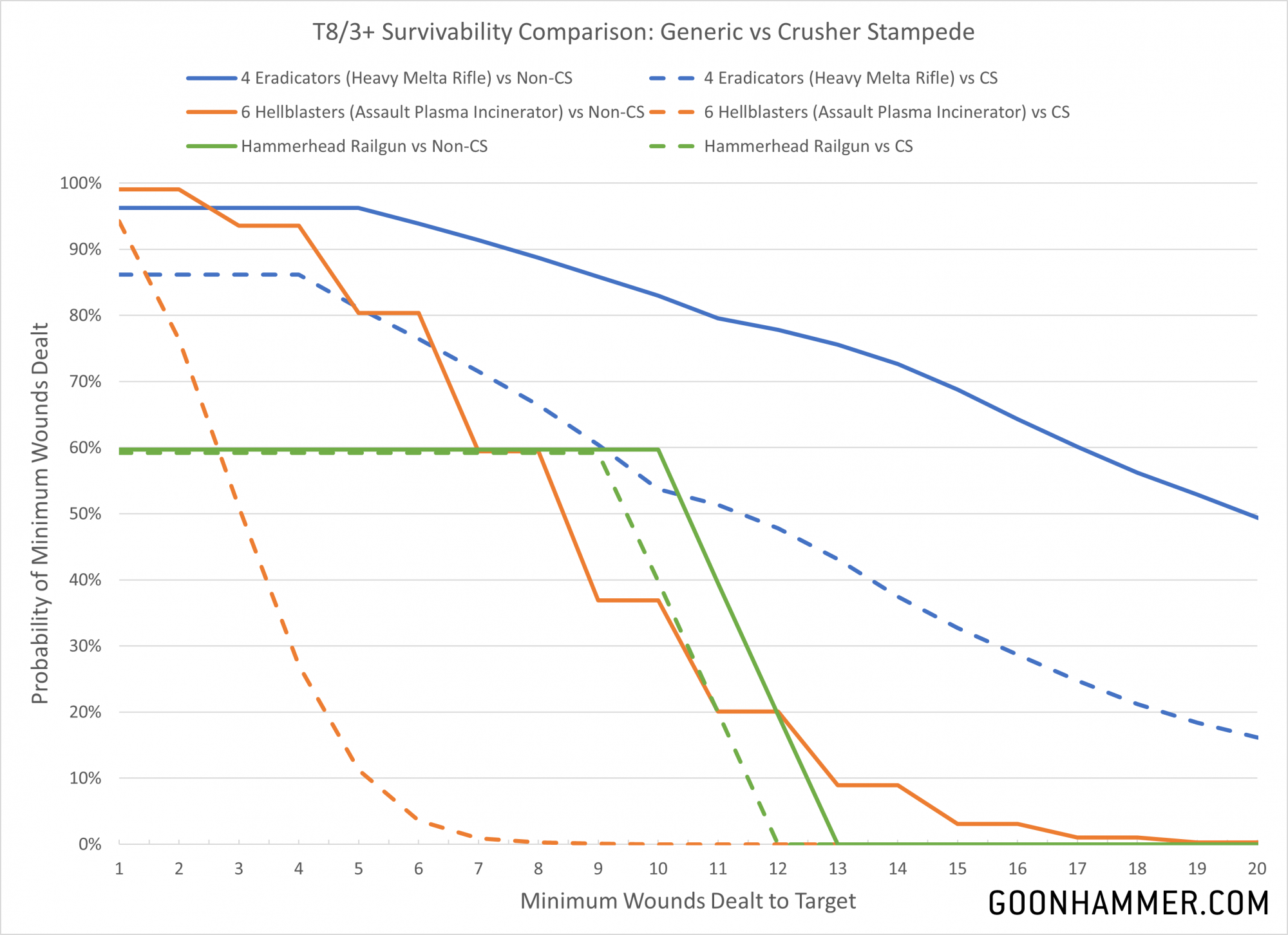 The influence of the invulnerable save and damage reduction are significant for two of the three scenarios looked at. For the high damage melta attack the average damage goes from 20 to 12, while the average damage inflicted by the Hellblasters is cut in half from 7 to 3. Unsurprisingly the railgun is largely unaffected; the new profile practically ignores all saves and inflicts a large amount of fixed damage, so the only thing impacting it is the -1 damage.

Crusher Stampede psykers can generate powers from the Hive Mind discipline, or pick up some of the powers from the oddly named Mass Convergence discipline. Of the two powers, two are fairly straightforward. Aggressive Surge (WC 6) adds D3 to the Attacks characteristics of a model within 18″. Infused Energies (WC 6) lets a unit re-roll hit rolls. From an offensive perspective these bonuses are both straightforward and fantastic, especially when combined with the hit bonus offered by the Bioweapon Bond Synaptic Link available for Tyranid Warriors. The other power is Synaptic Barrier (WC 6) which boosts the invulnerable save of a friendly unit with 18″ to 4+. While this is also straightforward, it does provide a second defensive boost to complement the 5+ ignore damage ability of Catalyst (WC 6). So which is better, and how hard is it to kill something with both? 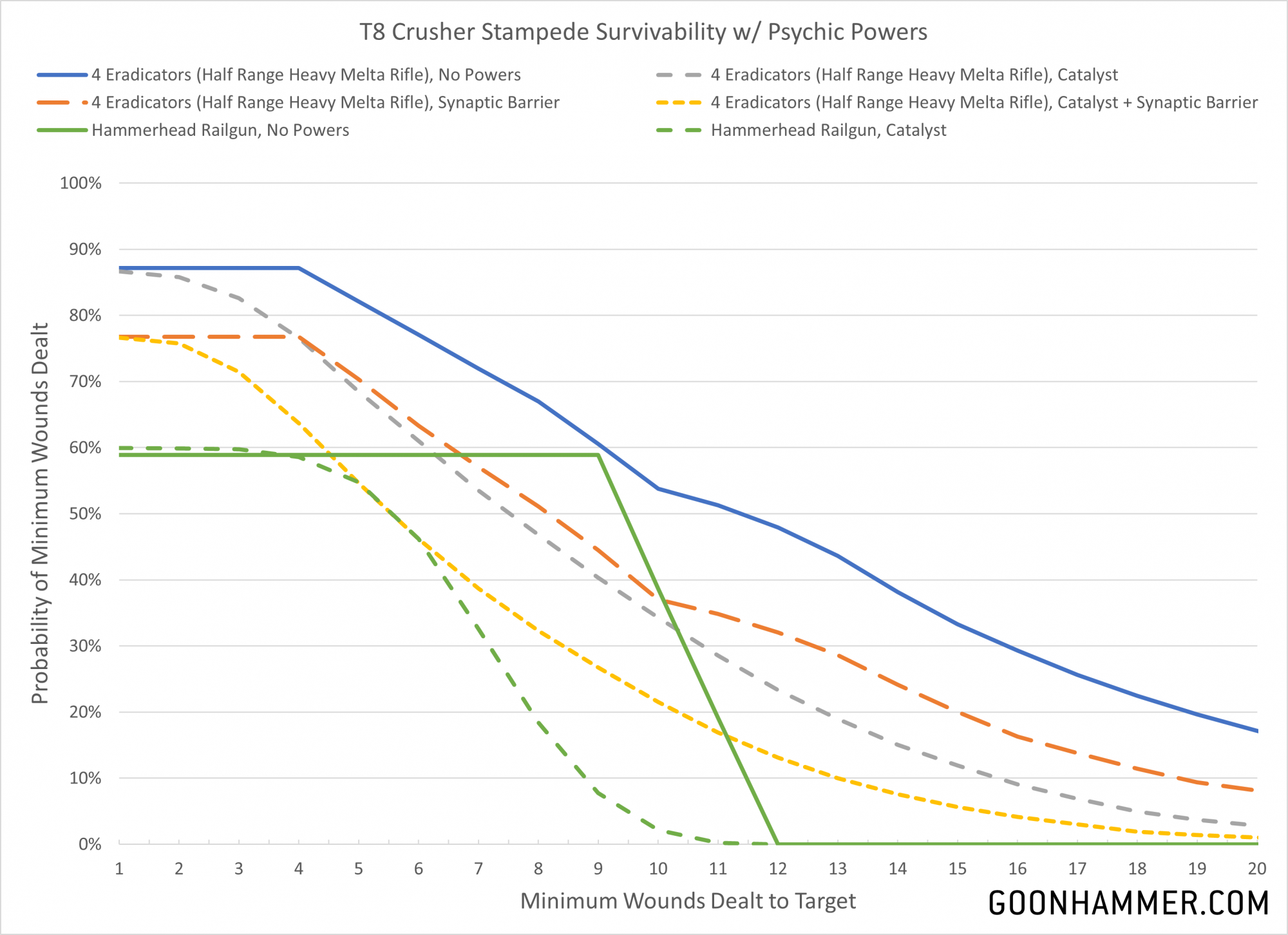 The results show that Synaptic Barrier is slightly less effective than Catalyst against the heavy melta rifles, but overall they’re fairly comparable. Combining both provides a significant reduction in damage. It might not be the worst idea in the world to either have two casters manifesting each power, or to give a psyker the Void Crown for the additional power from the Hive Mind discipline. 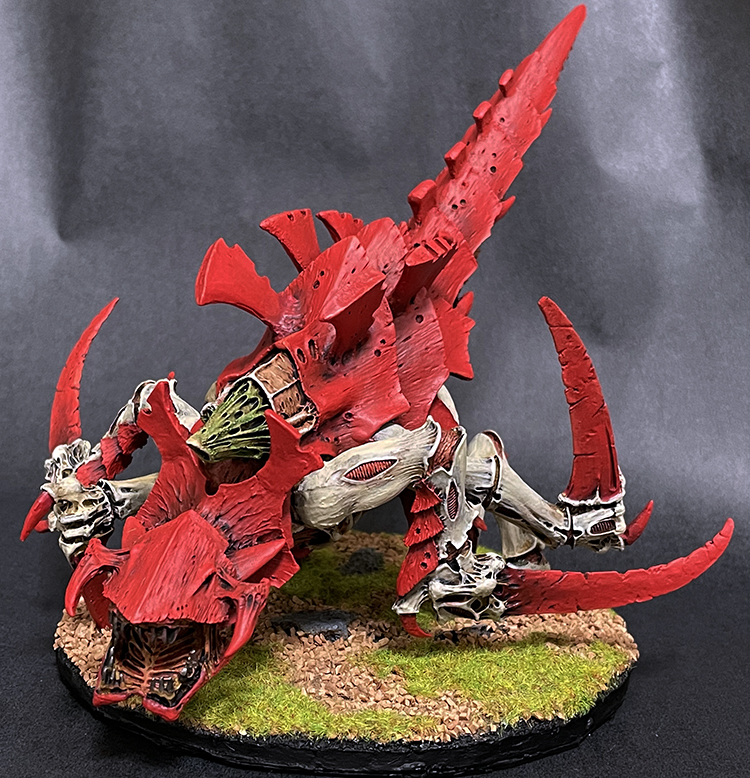 For 1CP a Crusher Stampede Monster can use Breaking Through to inflict up to 6 mortal wounds on an enemy unit that they charged. The player rolls a number of D6 equal to the charging model’s remaining wounds, and depending on whether the Strength characteristic of the charging model is greater, equal to, or less than the Toughness characteristic of the target every D6 roll of 3+, 4+, or 5+ will inflict a mortal wound up to a maximum of 6. Using binomial probability we can calculate the probability that at least a given number of wounds will be inflicted. 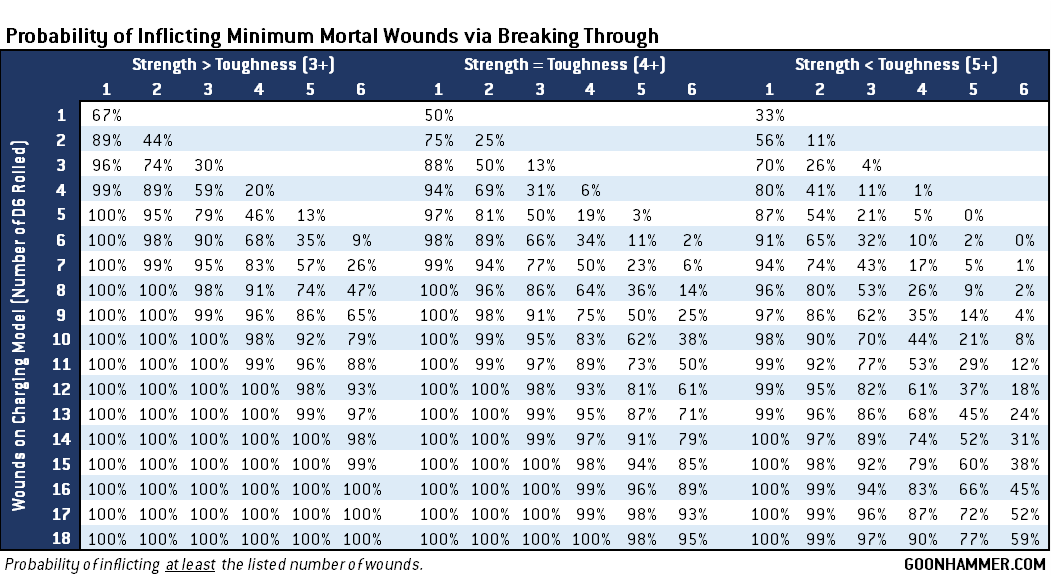 The results are impressive, especially for only 1CP. Assuming the Strength characteristic is greater than the Toughness characteristic of the target most monster units are going to be able to inflict a significant amount of damage. Something like an unwounded Dimachaeron is practically guaranteed to inflict 6 mortal wounds on a target that it charged.

I’m a big fan of this Army of Renown. It provides a viable and fun boost to an iconic threat of Warhammer 40,000, and anyone who has a Tyranids Spearhead Detachment box lying around from the Apocalypse release (…like me) now has even more motivation to make 2022 a bug-ridden one. I’m excited to see how players use these new rules.