This week’s Hammer of Math delves into the wonderful world of Dark Angels and their new codex, which some of our authors are particularly enthused about. Consider me to be one of them!

For a few editions now the Dark Angels have been the whipping boy of the 40k universe, the victim of bad rules and terrible jokes. When Space Marines were bad, Dark Angels were terrible. When the 2nd 8th edition codex dropped and Space Marines got better, Dark Angels were still pretty bad, as it wasn’t until Ritual of the Damned that they’d get an update with new units and the ability to use Combat Doctrines. 9th edition has seen things further improve, particularly when the DA received a very spicy interim update while they waited for an actual book. Now with their new book Dark Angels look to skyrocket to the top tiers of competitive lists thanks to a huge number of specialized rules that seem closely aligned with 9th edition. A player fielding Ravenwing and Deathwing can provide a huge number of hard to kill units with Objective Secured, and the Interromancy discipline has gone from being a complete joke to one of the strongest options in the game. Overall it’s a great time to be a fan of bone, black, and dark green.

The 1st Company of the 1st Legion and members of the Inner Circle, the Deathwing are the veterans and elite amongst the Dark Angels. In 9th edition this is represented by the Inner Circle rule, which results in the unit automatically passing Morale tests, never being allowed to Fall Back in the presence of FALLEN unless it’s inexplicably a VEHICLE (I guess the machine spirit is suspect), requiring a Leadership test to Fall Back otherwise, and of course forcing all unmodified wound rolls of less than 4 to always fail. That’s right, an entire company gets the equivalent of Transhuman Physiology and it never disappears. The effect of this ability is fairly straightforward; a weapon that wounds on a 2+ needs 1.67 attacks to be as effective against Deathwing while a weapon that wounds on a 3+ needs 1.33 attacks.

Of course the bonuses don’t stop there. Deathwing get access to Apothecaries which have the Narthecium Aura which provides a 6+ Feel No Pain (effectively adding 1.2 wounds to every model) to everyone within 3″. An Ancient can also carry the Pennant of Remembrance which allows one DEATHWING INFANTRY CORE unit within 6″ of the bearer to reduce the Damage characteristic of all incoming attacks by 1. Given that the 1st Company ability also grants Objective Secured to most of the Terminator units in the unit you end up with an extremely durable way to hold Objectives. The chart below shows the number of attacks required for many common weapons to kill a single Deathwing Terminator, and remember that they can come in units of 10. 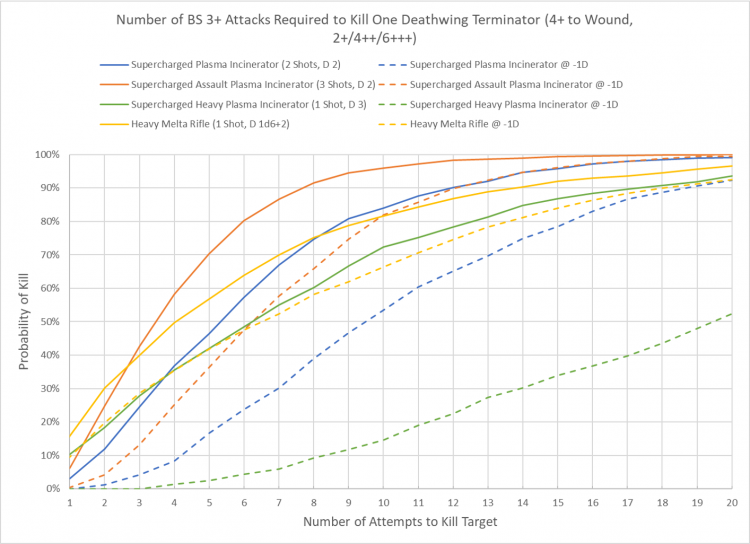 Traditionally overcharged plasma and melta weapons are absolutely brutal at eliminating Terminators thanks to the combination of high AP, high strength, and multiple points of damage. Deathwing severely mitigate those effects through an improved invulnerable save (either through a storm shield or the 4++ aura of Azrael), effectively making all attacks S4 at best, and for one unit each turn the ability to reduce damage. Individually these effects are significant, but when combined the effect is far greater.

As a Dark Angel player it may be worth asking if the Apothecary or the Ancient are worth the points. The two charts below show the effects of the Ancient and the Apothecary on a heavy melta rifle and an assault plasma incinerator. In both cases the effect of the damage reduction is more effective than the ability to ignore wounds, but the effects are even more pronounced when combined. This is particularly true against plasma weapons where an individual shot is unlikely to have damage that spills over. Given that Apothecaries have an aura and the ability to bring models back they’re well worth the investment. 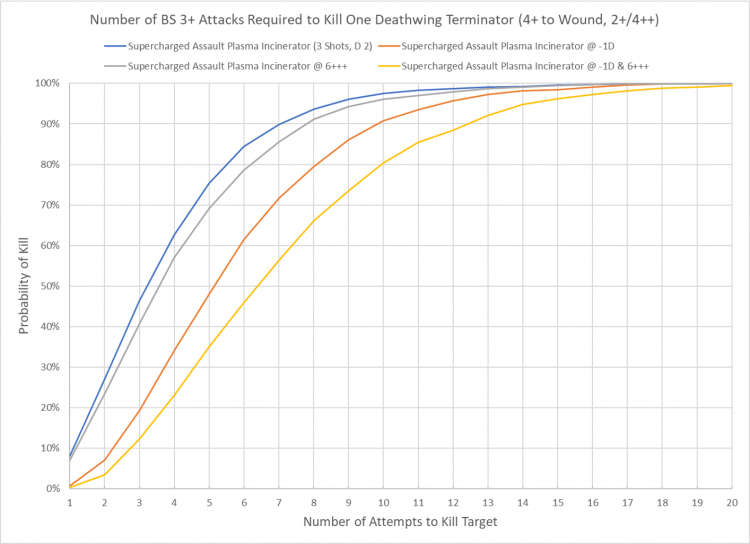 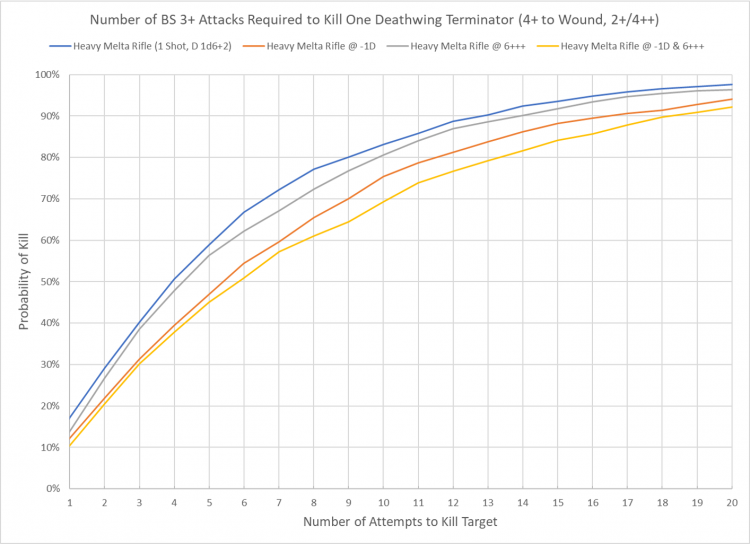 The Interromancy discipline went from being hit or miss to one of the most useful and solid power lists in the game. Powers like Mind Worm (WC 6) that allow a guaranteed mortal wound within 18″ as well as forcing an enemy to fight last, or Aversion (WC 6) retaining the -1 to hit bonus from before but also inducing an attack penalty are excellent. Offensively Righteous Repugnance (WC 7) is amazing, giving a friendly unit the ability to re-roll hits and wounds in melee. Engulfing Fear (WC 7) and Mind Wipe (WC 7) are built with 9th edition in mind, denying ObSec to enemy units or shutting down crucial aura abilties. But there is no greater example of how much the Dark Angels have improved than the Trephination (WC 5) power. Previously this power was the pinnacle of bad design, a Smite-like power that was too difficult to cast for way too little effect. Now it’s vastly better, with the same warp charge as a first casting of Smite. Against targets with a typical Leadership characteristic of 8 you have a roughly 15% chance of capping out at 3 damage when compared to Smite, and best of all there’s nothing stopping you from casting both. 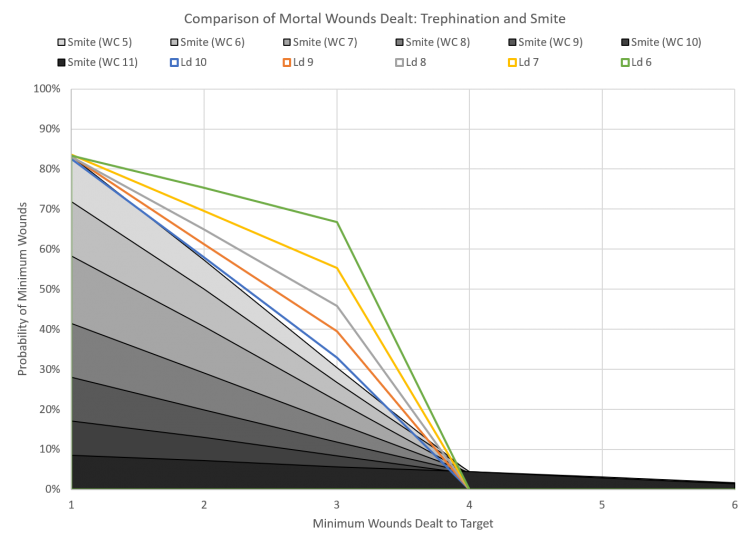 This just scratches the surface of how good Dark Angels are. Not covered are the amazing speed of Raven Wing, the glut of really good Stratagems, or how everything comes together in an amazing what. Dark Angel players should be VERY excited with all of their new toys.