This week’s Hammer of Math is a look at the defensive capabilities of the Shield-Captain on Dawneagle Jetbike.

In the past month Goonhammer has dropped a bunch of Competitive Innovation articles, and one of the key findings has been that T’au and Adeptus Custodes are extremely competitive. With Custodes the reasons are pretty simple; they’re incredibly lethal and very hard to kill. One key unit featured in every competitive list are Vertus Praetors (the jetbikes), and the vast majority of those lists also have a Shield-Captain on Dawneagle Jetbike.

Generally the Shield-Captain is built as follows:

This is in addition to the bonuses associated with their Shield Host and Martial Ka’tah. The most common Shield Hosts are Emperor’s Chosen (single hit or wound re-roll per shoot or fight sequence along with ignoring mortal wounds on a 4+) or Shadowkeepers (enemies in Engagement Range subtract 1 from their Attack characteristics and the unit can re-roll wounds versus CHARACTERS). For Martial Ka’tah the impact can be offensive (via Rendax) or defensive (via Kaptaris), but the actual ka’tah and stance will vary over the course of the fight unless the player uses Martial Discretion for 1CP to select a particular ka’tah stance. Finally the unit has the benefits of Aegis of the Emperor, which provides a 4+ invulnerable save and the ability to ignore mortal wounds on a 6+.

Defensively the model starts with 9 wounds at T6 and a 2+/4++ save profile which almost always gets upgraded with a 5+ ignore wounds ability. Most units also will have a -1 to hit courtesy of the second warlord trait. Against anything that might actually threaten the Shield-Captain the Custodes player will likely drop Arcane Genetic Alchemy for 1 CP to ensure that all unmodified wound rolls of 1-3 automatically fail. They can also apply The Emperor’s Auspice for 1 CP to prevent re-rolling any hit, wound, or damage roll associated with an attack on the model.

Offensively the unit is most lethal in melee where it can attack with its interceptor lance. The 6 attacks hit on a 2+ at S7 with an AP -3 and D2, but when charging or making a Heroic Intervention the lance adds +1 to the wound roll. Applying Tip of the Spear allows hit and wound rolls of 1 to be re-rolled. Should Rendax be applied the Shield-Captain will have the choice of automatically wounding MONTER or VEHICLE units on a hit roll of 6, or adding 1 to the Strength characteristic of an attack when charging. Generally if the extra strength changes the wound roll then it’s better than Stance 1.

For the purpose of this analysis we’ll assume that the Shield-Captain is fully tooled for defense, meaning it has a T6/9W/2+/4++/5+++ profile with -1 to hit and that any attacks will be offset via both Arcane Genetic Alchemy and The Emperor’s Auspice where appropriate. We’ll look at several profiles based on some of the most popular armies in recent lists and input from the Goonhammer Brain Trust.

First up are some lighter weapons. 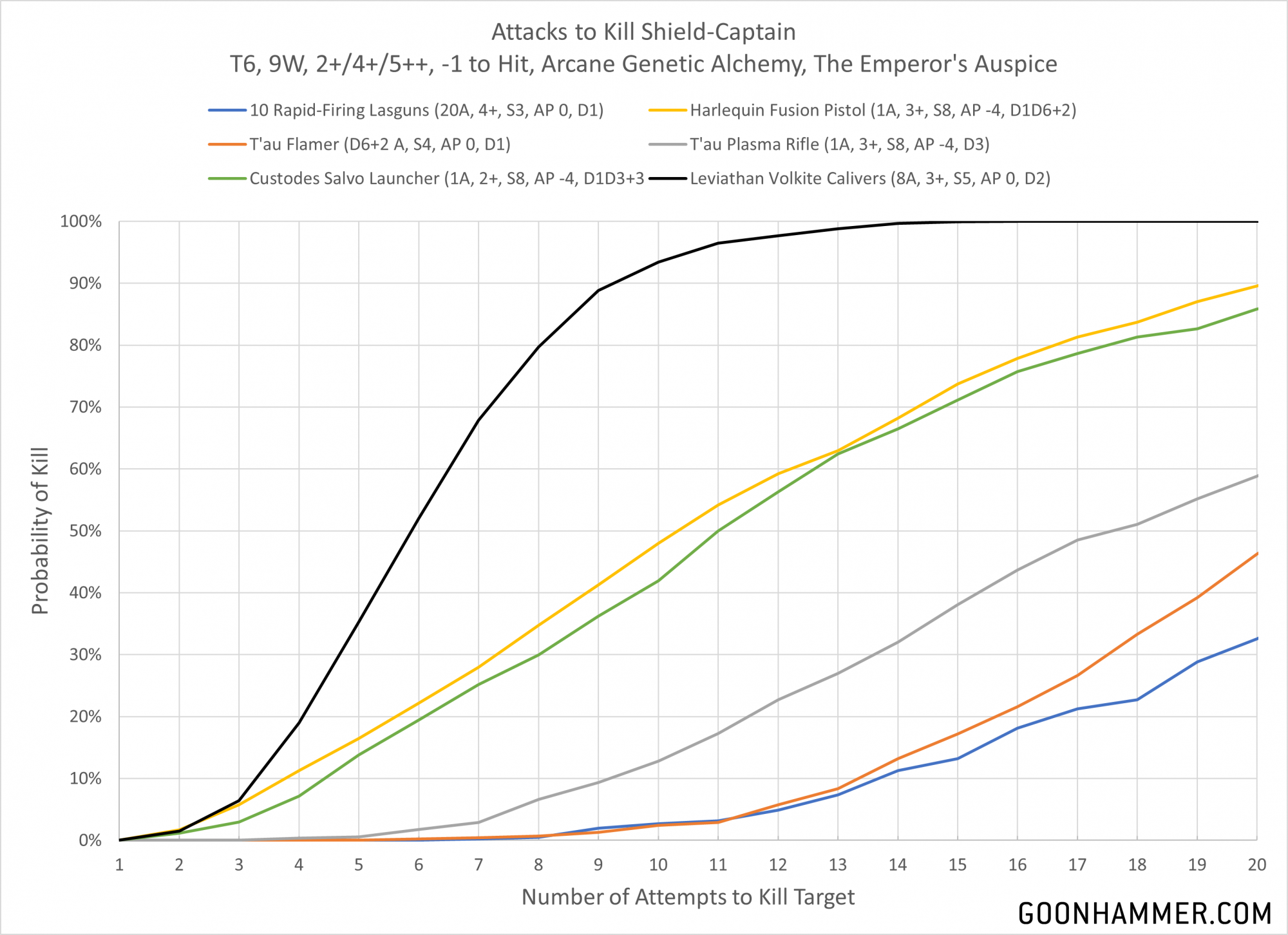 We quickly see that even the Leviathan struggles with this target, and most units aren’t even worth rolling the dice on. The combination of mitigating the hit and wound rolls, high invulnerable save, and the option to disregard wounds makes smaller attacks like this largely irrelevant. For some weapons like T’au plasma rifles and flamers the poor performance can be offset by volume of fire. On the other hand even 200 Guardsman rapid firing their lasguns at point blank range only have a roughly 1 in 3 chance of killing the Custodes.

Next up are some more impressive units. 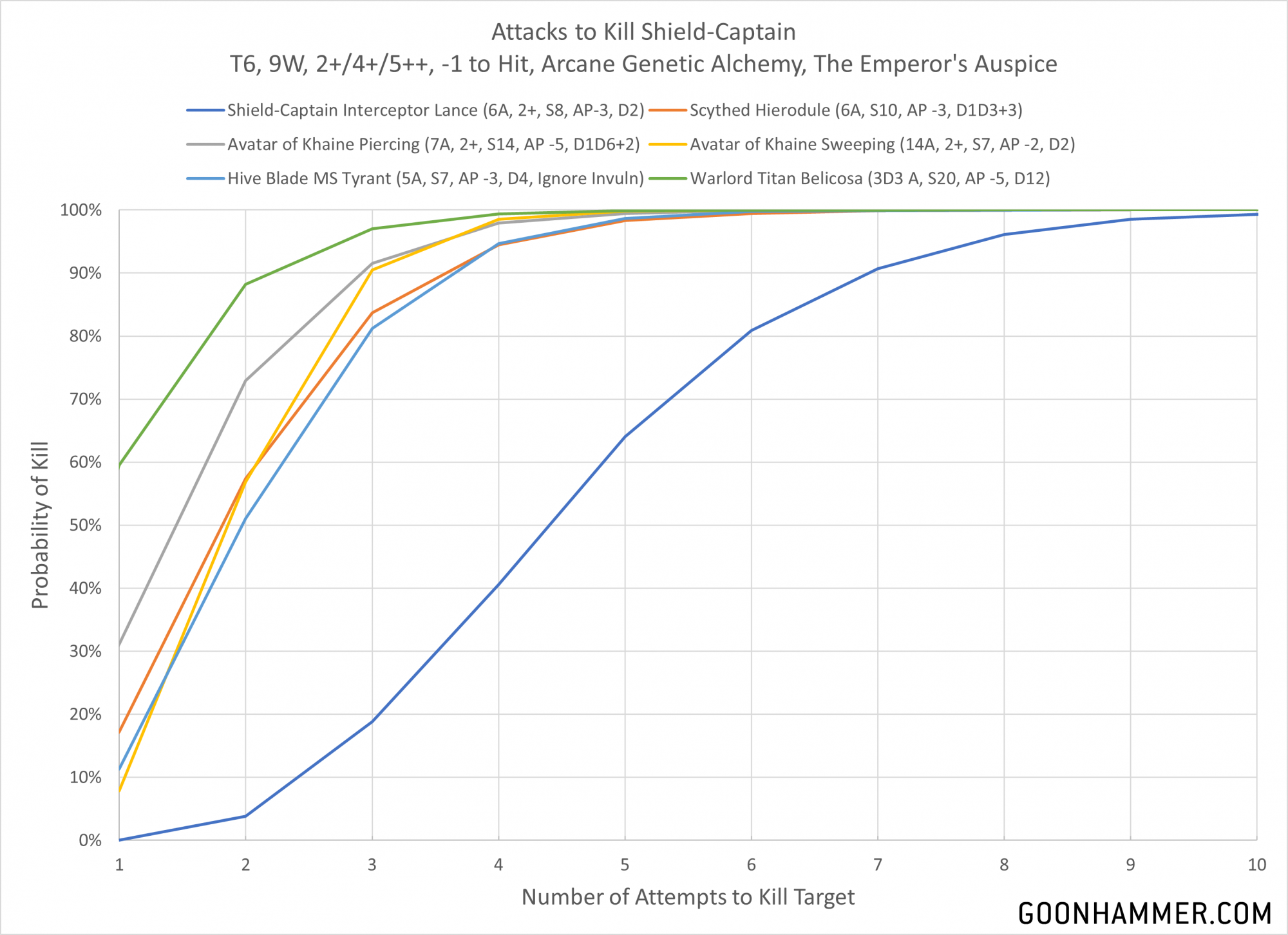 Note that for the most part these abilities do not include many Stratagems or other offsets; for example the Hive Tyrant could probably be much nastier with the right warlord traits and boosts (not to mention a new codex, whenever GW decides to release it). The good news is that if you take a skyscraper-sized walking cathedral and aim its city-leveling primary armament at a Shield-Captain you’ll probably kill it. 40% of the time. The bad news is that in general the Shield-Captain is exceptionally hard to kill, even with elite units like the Avatar of Khaine.

A final consideration can be applied towards the application of mortal wounds through the Smite power. Adeptus-Custodes innately ignore mortal wounds on a 6+, while Shield-Captains with the Superior Creation trait can ignore them on a 5+ and any member of the Emperor’s Chosen Shield Host will ignore them on a 4+. With that in mind we can chart the number of Smite attempts required to deal the nine mortal wounds necessary to kill the Shield-Captain. We can see in the chart below that the numbers are not very high, with even an unprotected Shield-Captain requiring 7 Smite attempts to kill it more often than not. Applying the 4+ from Emperor’s Chosen increases this requirement to over 11. What’s worse is that this bonus is universally applied across the entire Custodes army, making it particularly challenging for any force which relies on the relatively scarce application of mortal wounds to have an impact. 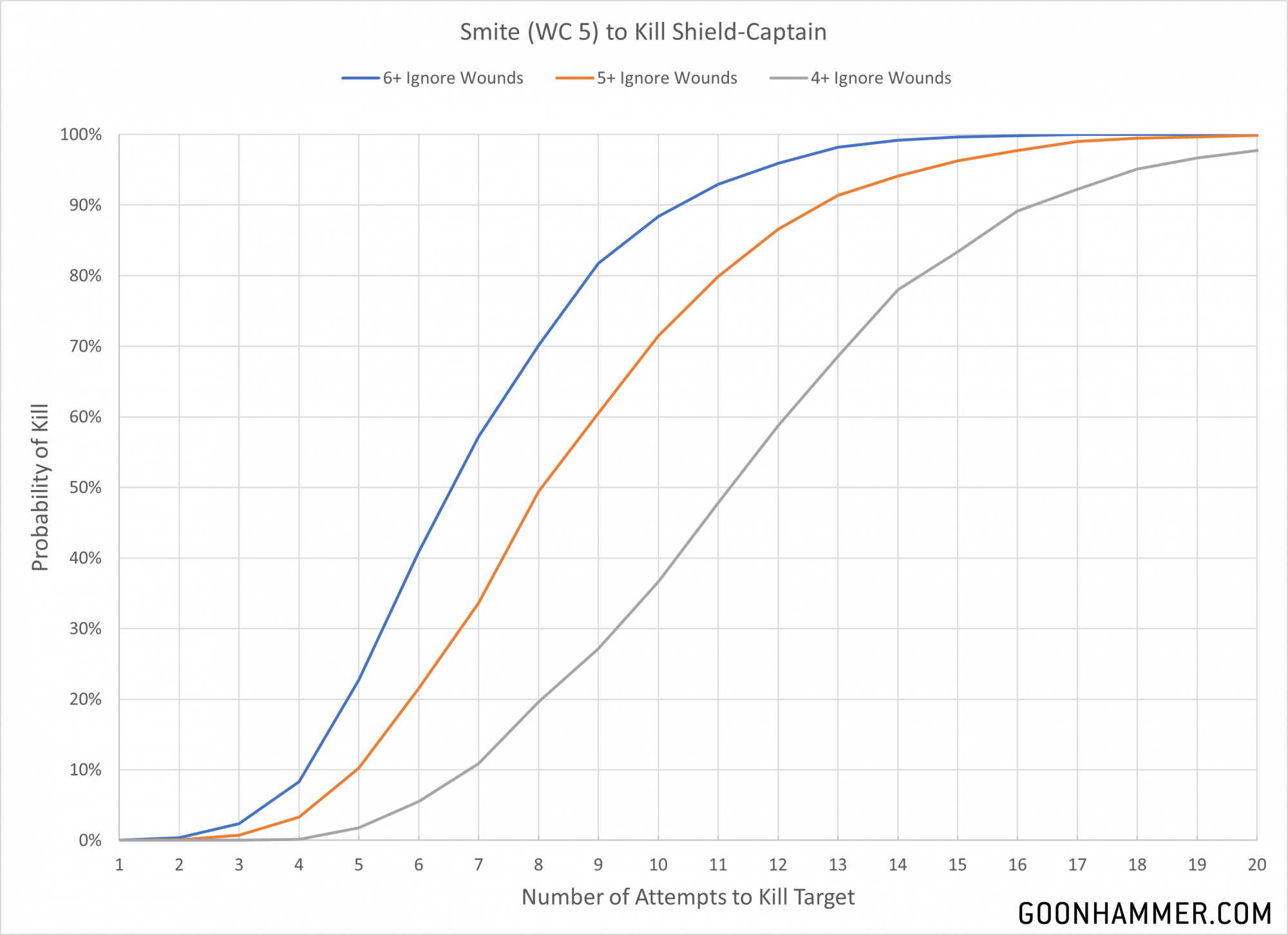 The Emperor Knows How To Build Them

Unsurprisingly Adeptus Custodes, and their Shield-Captain leaders in particular, are exceptionally hard to kill. With the right Shield Host, traits, and Stratagems a Shield-Captain can ignore the vast majority of bonuses and rules that would otherwise kill them. This is a perfect example of the synergistic effect that comes from stacking multiple abilities whether that be ignoring high Strength, denying re-rolls, reducing the chance to hit, or disregarding wounds entirely. Individually these effects can be significant; cumulatively they can be insurmountable.