This week’s Hammer of Math takes a look at the special, melee-oriented genetically flawed murder units from the Blood Angels and Space Wolves.

The core ability of all Blood Angels is The Red Thirst, which improves Advancing and charge rolls by 1 and gives a +1 wound bonus whenever the unit charges, was charged, or performs a Heroic Intervention. In the Assault doctrine they can use Savage Echoes to get an additional attack every time they charge, were charged, or perform a Heroic Intervention. There’s actually two different Death Company units; the beloved Firstborn with their myriad of weapon options and the Primaris Intercessor option which has access to all the toys of Intercessors and nothing more. Death Company all succumb to the Black Rage which means they cannot Fall Back, get an additional attack when charging, being charged, or making a Heroic Intervention, ignore all wounds on a 6, and cannot perform Actions. The basic model with a bolt pistol and Astartes chainsword is 22 points, but they get access to a myriad of very nasty power weapons (sadly not the lightning claw) as well as jump packs. As they are CORE units they have access to things like Litanies or re-rolls from aura abilities.

In terms of Stratagems, Death Company have access to a variety of options. Those with jump packs can use Descent of Angels (1 CP) to ignore charge roll modifiers and get +1 on the hit roll. Refusal to Die (1/2 CP) allows them to ignore a wound on a 5+ instead of a 6+. Forlorn Fury (1/2 CP) allows a free Normal Move of up to 12″ at the start of the first battle round (ending the move at least 9″ away from the enemy), and Upon Wings of Fire (1 CP) permits a JUMP PACK unit to leave the battlefield and drop down in the following turn during the Reinforcements step.

Space Wolves all gain Hunters Unleashed, which adds 1 to the attack roll whenever the unit charges, was charged, or performs a Heroic Intervention. This ability also allows all Space Wolves to perform Heroic Interventions as if they were CHARACTERS, making it a terrifying prospect to get close to anything in grayish blue power armour. Their doctrinal ability is Savage Fury which, during the Assault doctrine, deals an additional hit every time a hit roll is an unmodified 6. Wulfen have access to an insane number of abilities, such as Death Frenzy which ensures that a Wulfen model that is destroyed in melee will still be able to fight. They have the ability to re-roll charges thanks to the Wulfen Howl (Aura), and Savage Killers means the Assault Doctrine is always treated as being active and that for the purpose of Shock Assault the unit is always considered to have charged. They’re also so angry that they can’t perform actions due to Bestial Rage. In terms of weapons the baseline model only has a D1 attack at AP -1 but they have access to Wulfen frost claws (lightning claws with a strength bonus), great frost axes (+3 S, AP -3, 2D), and the ubiquitous thunder hammer with an accompanying storm shield. They’re also S5, T5, have 3 attacks base, but only have a 4+ armour save due to the reduced coverage of power jorts. A basic wulfen is only 25 points per model but you’re likely adding 5 for forst claws, 8 for a great frost axe, or 16 for a thunder hammer and storm shield.

In terms of available Stratagems their options are somewhat limited. Cunning of the Wolf (1 CP) is useful for getting them in range via Outflank, Savage Strikes (1/2 CP) adds +1 to the wound rolls of attacks, Relentless Assault (1 CP) provides an additional 3″ for consolidation, and if your opponent is dumb enough to get close to Wulfen then you can use Counter Charge (1 CP) to perform a Heroic Intervention of up to 6″.

Now here’s the downside; Wulfen have practically no mobility to speak of. Nearly every Space Marine transport in the game (with the exception of the flying Space Wolf brick and the Land Raider) actively prohibits units with the WULFEN keyword from being fielded. On top of that they have no means of Advancing and charging, and as they are not CORE units they cannot gain any benefit from auras or Litanies. They are very much on their own, and their limited threat range makes it difficult to justify the investment. One thing that they can benefit from is a nearby Rune Priest manifesting blessings such as Psychic Fortress to give them a 5+ invulnerable save, assuming they haven’t paid the 16 point premium for thunder hammers and storm shields.

We’ll put up an equal value of Firstborn and Primaris Death Company models with an equivalent number of points worth of Wulfen against various targets. We’ll choose loadouts depending on the nature of the threat (no sense in wasting thunder hammers against Orks, regardless of how satisfying a sound it makes), and will apply relevant Stratagems. We’ll equip the Firstborn Death Company with Jump Packs to reflect their need for mobility and so that they can use Descent of Angels, and also to see how much is lost in terms of lethality. We’ll assume the units are charging to get all of the relevant bonuses and that the Assault Doctrine is active.

The first target will be the iconic Ork mob. For this the Death Company units will be equipped with Astartes chainswords (25 PPM for Marines, 24 PPM for Intercessors), and the Firstborn units will apply Descent of Angels. The Wulfen will be equipped with Wulfen frost claws (30 PPM) and use Savage Strikes. Each Death Company Intercessor gets 7 attacks compared to the 6 of the Firstborn, but the Firstborn are hitting on a 2+ instead of a 3+. Each Wulfen gets 5 attacks, but is hitting on a 2+ and is re-rolling wounds with a +1 bonus. 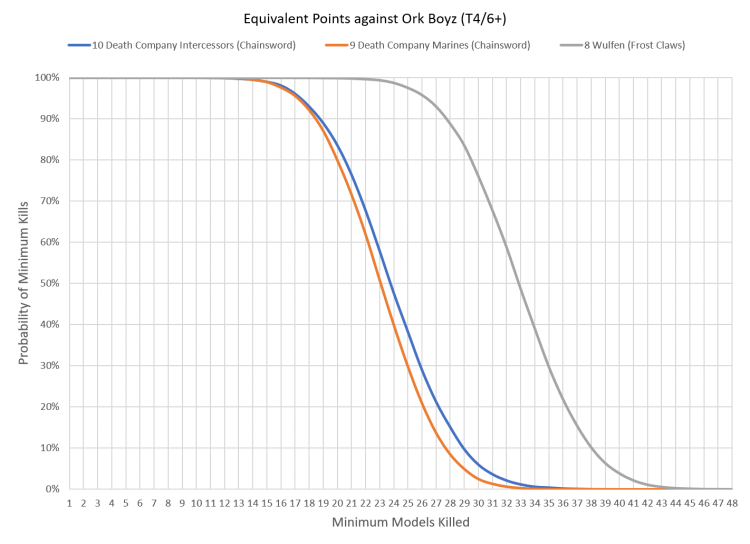 Note that 9 Death Company Marines is only 225 points so the actual number of wounds dealt for an equivalent value of 240 points is about 6% higher, meaning that even with the jump packs the Death Company Marines are better at killing Orks thanks to Descent of Angels. The Wulfen absolutely shred the Blood Angels in the horde clearing department, killing 40% more Orks on average. If you can get them into contact Wulfen are an absolute nightmare.

The T4/3+/2W profile is ubiquitous so we might as well use that for our next target. Here the Death Company Intercessors are going to be at a bit of a disadvantage as none of them can take a power weapon if they’re all equipped with Astartes chainswords. The Death Company Marines pose an interesting question; is it better to field power fists (35 PPM) and deal 2 damage, or power swords (30 PPM) since the +1S means you’ll be wounding on 2s either way? The Wulfen offer a similar question; are you better off with frost claws (30 PPM) or paying extra for the bonus damage of the great frost axe (33 PPM)? 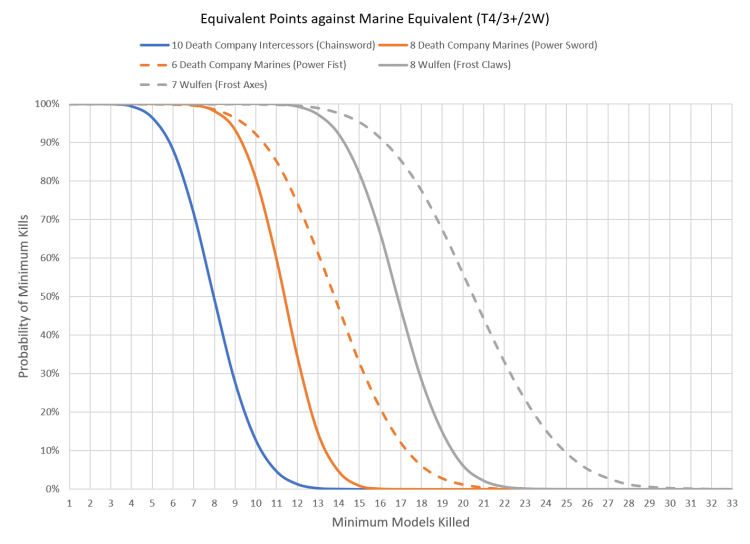 As expected the bonus damage is king, and the combination of Wulfen and frost axes is particularly devastating thanks to all of those S8 hits. What’s notable is that significant bonuses provided by the frost claws makes them better than even the Death Company with power fists on a per point basis. The frost axes are particularly brutal thanks to the combination of hitting and wounding on 2s, dealing enough penetration to ignore a 3+, and inflicting two points of damage. Imagine their potential if they were CORE and could benefit from re-rolls and other abilities like Death Company can.

Both the Death Company and the Wulfen have the option to inter their genetically flawed murder buddies into a walking sarcophagus with the firepower of a tank. The Wulfen Dreadnought can field either a Fenrisian great axe or a great wolf claw (or sacrifice one for a 4+ invulnerable save). It gets 5 attacks on the charge and hits at S10, getting the same bonus and extra attacks as its smaller brethren, and costs either 120 or 125 if the blizzard shield is taken. The Death Company Dreadnought is an absolute monster with 8 attacks on the charge and hitting with either blood talons (S10, re-roll wounds, AP -2, D3) or a furioso fist (S12, AP -3, D3). The base cost is 125 with an extra 5 if you get the blood talons or magna-grapple (for preventing VEHICLE units from escaping). As it suffers from the Black Rage it does ignore all wounds on a 6+. Neither the Wulfen or Death Company Dreadnoughts have the CORE keyword and so therefore cannot benefit from any auras or Wisdom of the Ancients. Blood Angels also get access to the always fun Librarian Dreadnought, who gets 6 attacks on the charge an an additional D3 attacks if they have Quickening active, not to mention an extra 12″ move thanks to Wings of Sanguinius. Not bad for 150 points and a unit that can also take Warlord traits and get access to thinks like the Adamantine Mantle.

For the chart below we take a look at our old friend; the T8/3+/24W monstrosity that is the Knight. The Wulfen units will use Savage Strike for the wound bonus, while the Librarian Dreadnought will have Quickening active. As with before we’ll assume the Assault Doctrine is active. 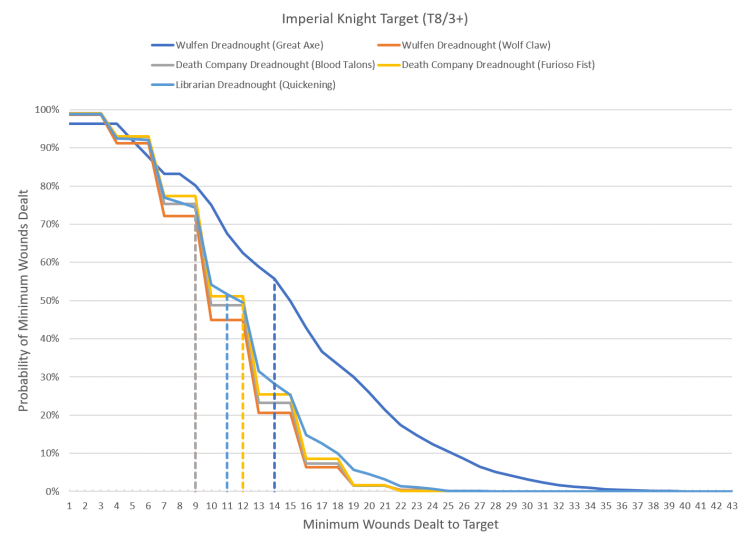 Surprisingly the output of the Wulfen Dreadnought exceeds even the Death Company when you use the great axe. This makes it easier to justify replacing the wolf claw with a blizzard shield for a 4+ invulnerable save, which will work very well with Duty Eternal. The Death Company Dreadnoughts all performed fairly equal, with the blood talon having a slight disadvantage over the furioso fist due to the possibility of a 6+ save eliminating all of the damage. As expected the Librarian was a solid performer, and would work well when combined with the enhanced mobility. Sadly only the Wulfen has a chance of one-shotting a Knight.

While both the Space Wolves and Blood Angels have their iconic units, not all genetically flawed monstrosities are created equal.