Hammer of Math: Death Guard in War of the Spider

Psychic Awakening has started to near the end, with only Pariah left before we expect to see the release of 9th Edition. War of the Spider has been particularly well received thanks to a healthy injection of content for Assassins, Sisters of Silence, Custodes, the Creations of Bile, and Death Guard. This week we’ll take a close look at the Sons of Mortarion and some of the interesting combinations that Father Nurgle has blessed his power armored children with.

Death Guard received one of the biggest updates in Psychic Awakening, with a whopping thirty five new Stratagems and a host of Relics and new Warlord Traits. In his updates regarding 9th Edition Stuart Black has consistently explained that their intent is to make each faction distinct and have a certain series of strengths and weaknesses. From PA it’s obvious that the strength of Death Guard is resilience. Nearly every unit in the army has a 5+ Feel No Pain, and many units can improve that ability through re-rolls or bonuses. The presence of a high number of invulnerable saves compounds this, as does the ability for many units to regenerate their damage. War of the Spider also provides a significant boost to the lethal output of many units, which is particularly unpleasant when you consider that Plague Weapons provide a fixed 17% boost when all wound rolls of 1 are re-rolled.

The core benefit to nearly every Death Guard unit (plus any unit with Contaminated Monstrosity for 1 CP) is the 5+ Feel No Pain bonus provided by Disgustingly Resilient (DR). We’ve covered this before, but Feel No Pain is one of the most powerful abilities in the game. It generally cannot be modified, and every wound saved by it is another opportunity for the roll to be made again. This consecutive application also applies to saves as well, but because Feel No Pain is generally a static probability it’s simpler to demonstrate. One of the easiest ways to look at the effect is to examine the number of “effective wounds” that a model has as a result of that ability. The formula for this effect is below:

In other words the number of effective wounds is one divided by the probability that a wound will not be ignored. For a 5+ (33% chance of success) the probability of wounding is 66%, and the inverse of that is 150%. From a probability perspective a 2 wound unit with a 5+ Feel No Pain effectively has 3 wounds. Death Guard have access to several ways to further enhance this ability. Warlords with the Revoltingly Resilient trait, or Plague Marines receiving the benefits of the Putrid Fecundity Stratagem (2/3 CP) add 1 to the result of DR rolls. In addition Death Guard INFANTRY units within 3″ of a Plague Surgeon can re-roll DR results of 1. This can be improved to a roll of 1 or 2 with the Alembichal Narthecium Stratagem for 1 CP. The effect of these bonuses is shown below, along with a comparison to a 6+ FNP should there ever be a modifier or comparable result.

The armor or invulnerable save has a similar compounding effect. To determine the effective wounds from compounding the save and the DR roll, multiply the probability that each roll will fail and divide that by one. For example a 5+ invulnerable and a 5+ DR both have a 66% chance of failure, which is 44% when multiplied together, and the inverse of that is 225%. So compared to a model with no save or DR a typical Nurgle daemon effectively has 2.25 more wounds (including Plagueburst Crawlers). Daemon Engines stand to benefit significantly from the Poxmongers and their Ironclot Furnace Relic which provides a 4+ invulnerable save to all DAEMON ENGINE units within 7″. Going from a 5+ to a 4+ invulnerable save increases the effective wounds from 225% to 300%. In other words, taking this single Relic gives every Plagueburst Crawler within 7″ an extra 9 wounds. This effect also applies to healing, making the 1d3 wounds gained by The Flux Abated for 1 CP extremely powerful.

Speaking of crawling daemon engines that are impossible to kill, War of the Spider also provided a significant boost to the lethal output of Plagueburst Crawlers thanks to Accelerated Entropy, a 1 CP Stratagem that gives entropy cannons the Plague Weapon keyword and also makes damage rolls of 1 or 2 count as 3 instead. The effect of these changes is significant. First, the Plague Weapon keyword means that the attack now re-rolls wound rolls of 1. Second, the damage roll change heavily mitigates the variance and changes the expected damage from 3.5 to 4. Third, entropic cannons can now be affected by abilities which affect Plague Weapons such as the Arch-Contaminator trait (re-roll failed wound rolls on Plague Weapons within 7″) or a Plague Surgeon with Hypertoxic Tinctures (re-roll wound rolls of 1 or 2 for Plague Weapon attacks within 6″). They can also have their range increased by 6″ using the Overwhelming Generosity Stratagem for 1 CP.

To examine the impact, we’ll take a look at a Plagueburst Crawler firing a pair of entropy cannons under two conditions. Under the first condition (solid lines) the Crawler will have no bonuses but be within the re-roll arc of a Chaos Lord. In the second scenario (dashed lines) the Crawler will have Accelerated Entropy applied and the Chaos Lord will have Arch-Contaminator to allow wound rolls to be re-rolled. This is a viable approach thanks to the Plaguechosen Stratagem which costs 1 CP to apply a Warlord trait to a second Death Guard CHARACTER. Toss on the Ironclot Furnace and you have an extremely potent combination. The results are simulated against a T7/3+ target as well as a T8/5++ target. 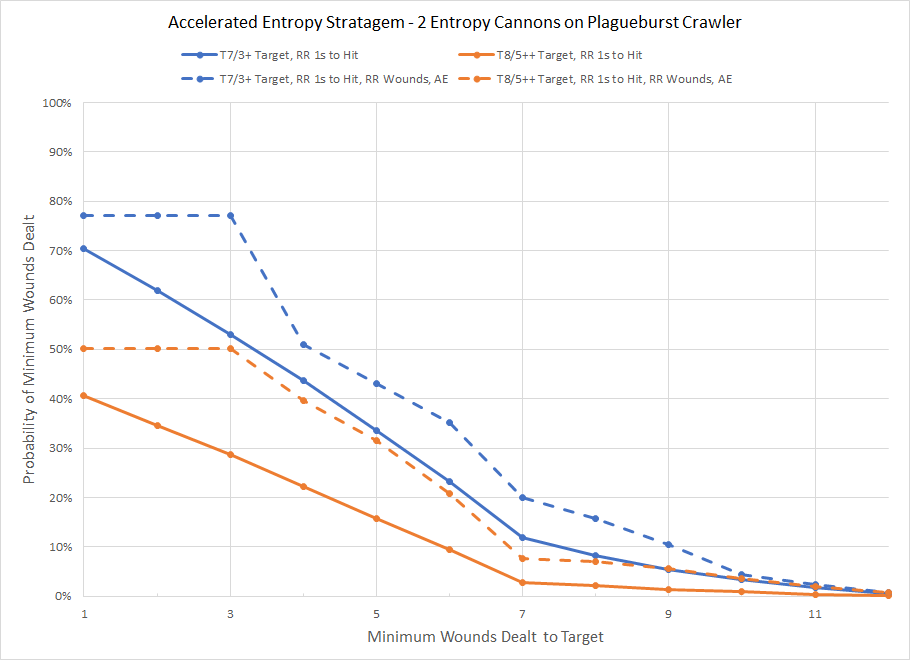 Even with the bonuses the entropy cannons still suffer from the low Ballistic Skill of the Plagueburst Crawlers, but with only a pair of shots the results are still pretty reasonable especially when you consider that the effect is aura-based and applies to multiple Crawlers. Bring three and have fun raining death down on your opponent.

You can see how Psychic Awakening has provided a significant enhancement to the resiliency of units through Disgustingly Resilient as well as improving the toughness and output of Plagueburst Crawlers. There’s a lot more to cover here and we’ll likely come back to Death Guard at some point. We’ll cover the rest of the War of the Spider book next week, and shortly after we’ll see what’s available in Pariah. After that we’re optimistic that 9th Edition will appear soon and render nearly all of our hard work irrelevant.