This week’s Hammer of Math takes a look at some of the numbers behind the new Deathwatch supplement to Codex: Space Marines. For a review of the codex which drops next week, click the link here.

The new Deathwatch supplement makes some major shifts over 8th edition. One of the biggest is the loss of Special Issue Ammunition for Primaris units and most others; instead SIA is limited to weapons that explicitly have the ability. Those weapons are limited to Deathwatch bolt pistols, boltguns, stalker pattern boltguns, and the vigil spear carried by Watch Masters. Of those weapons only the Deathwatch boltgun and stalker pattern bolters are available outside of unique datasheets. In other words, what was previously a core ability for Deathwatch has been severely curtailed to a Deathwatch Veterans and the Proteus Kill Team. Games Workshop has also changed the rules for several of the weapons, making it a much more meaningful choice when you decide what ammunition to use.

For units that don’t have access to Deathwatch boltguns or stalker pattern bolter, the alternatives are to either use Special-Issue Loadout for 2CP to add SIA to a bolt weapon (but not bolt sniper rifles) at the expense of making them Heavy 1, or applying the Artificer Bolt Cache to a single model’s bolt weapons (which can be a Sergeant via Sanction of the Black Vault for 1 CP). This opens up a few interesting options:

In terms of applying specific types of SIA, if you need the range, take Kraken. Otherwise your choice of Vegeance, Dragonfire, Kraken, or Hellfire depends on the extent to which the modifier improves the outcome. The chart below is a handy reference:

Effect of Modifiers on Expected Value

Against multi-wound targets you also need to consider how many shots are required to kill the target. For example a stalker bolt rifle firing at a Gravis unit will require 2 shots to kill the target. Add an extra point of damage and the Gravis is now killed in a single turn, a 100% improvement. On the other hand a bolt gun firing at the same Gravis requires 3 shots normally, or 2 shots if Vengeance ammunition is used. That’s only a 50% improvement, and if the target is in light cover and getting a 2+ save then firing Kraken or Dragonfire would actually be more effective.

Deathwatch have the unique option to field units of 5 Outriders with ObSec in Fortis Kill Teams, but at 45 points per model they’re 50% more expensive than Veteran Bikers which can be fielded in Proteus Kill Teams. The mandatory models (5 Veterans or 5 Intercessors) have nearly identical stats (Veterans have more Leadership), and a Deathwatch boltgun firing Kraken ammunition has the same profile as a bolt rifle. The outriders do have better bolt weapons on their bikes, but does the extra wound and bonus attacks offset the increase in price? Is there a melee option available to the Veteran Bikers that can make them better?

In terms of survivability the Outrider has 33% more wounds for 50% more points, but this does not reflect the complete picture. The actual impact depends on the Damage characteristic of the attack. Against D1 weapons the Outrider is tougher, but both require two shots from D2 weapons to be destroyed. Obviously against D3 weapons the Outrider has an advantage, so in the end your local meta will likely determine whether or not the points are worth it. Offensively the Outrider will get 6 attacks on the charge with an Astartes chainsword while the Veteran Biker will get 4, so the difference in output is identical to the difference in price. In other words, for the points the Veteran Bikers are competitive (if not superior) to Outriders. Can we do better? If we spend 5 points on a power sword the Veteran Bikers will lose an attack but gain a bonus to AP and strength that may be helpful against a typical T4/3+ target. 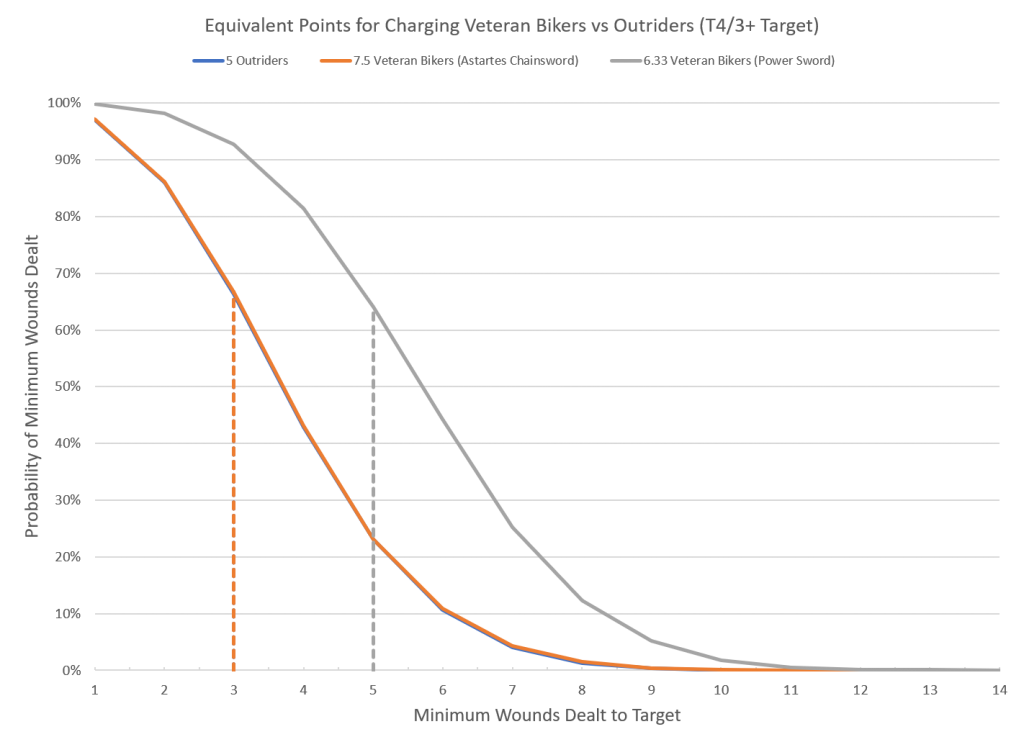 An equivalent number of points worth of power sword equipped Veteran Bikers outperformed the Outriders against a T4/3+ target, although in the end we’re still only talking about two to three dead Primaris Marines using more bikers than can fit in a single Proteus Kill Team. The real strength in these units is their ability to rapidly push forward and contest objectives, forcing the enemy to deal with them at the expense of other, more lethal options.

Hopefully this article has provided some useful insight into the effectiveness of SIA and the viability of Veteran Bikers. The changes to SIA force the player to make difficult choices where every option is relevant, and while it’s a shame that Primaris lost access to them there are a few ways to make for some interesting combinations. For those with a cache of Firstborn models Veteran Bikers are definitely worth considering, especially if the idea of overwhelming your opponent and forcing them to deal with multiple contested objectives simultaneously is appealing. For their points they’re a fantastic option.