With Engine War out we decided it might be fun to take a look at Chaos Daemons and something for all four of the Chaos gods from the latest supplement of Psychic Awakening. This is a continuation of last week’s article, which covered all of the public information we had available.

Engine War dropped with tons of fun content for Chaos Daemons as well as the Adeptus Mechanicus, Chaos Knights, and Imperial Knights. Each faction has received plenty of new rules, new Stratagems, and new Relics. In the case of Chaos Daemons the new rule is the Exalted Greater Daemon rule, which allows you to spend 1 CP (as often as you’d like) to put an enhancement of the centerpieces of your army. Several of these options are extremely powerful and open up a lot of possibilities that we here at Goonhammer are very excited to see take place on the battlefield.

Tzeentch has blessed his most prestigious of daemons with several impressive abilities. Exalted Lords of Change can become even more impressive casters with Mastery of Magic, devastate enemy Psykers with Spell-thief, or use Lord of Flux to deal even more mortal wounds when manifesting psychic powers. Outside of the realm of psychic powers there’s one ability that’s particularly intriguing; Aura of Mutability. When the model loses a wound as a result of an attack, the wound is not lost on a roll of 6. Furthermore for every wound negated, the model gains one lost wound at the end of the phase. In other words it’s a 6+ Feel No Pain with something extra thrown in. I had never seen something like this before so I decided to simulate how many wounds would need to be dealt to take out a Lord of Change, and compare it to a 5+ and 6+ Feel No Pain to see what was comparable. 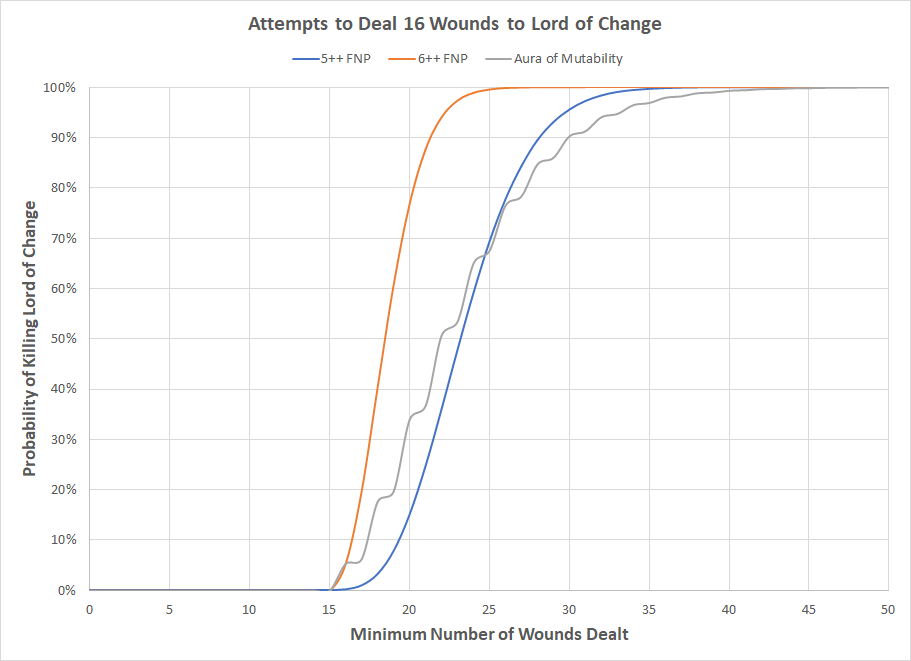 This is an interesting one. A 6+ Feel No Pain is effectively a 20% increase in wounds and sure enough the 50% mark crosses between 18 and 19 wounds. A 5+ Feel No Pain provides a 50% effective increase and we see that pan out as the 50% mark falls before 24 wounds. Aura of Mutability falls somewhere in between, with a 50% point of 22 wounds (38% increase in effective wounds), but the distribution is not as even. This can make the model incredibly hard to kill when combined with the 4+ invulnerable save, the damage reduction of the Incorporeal Form warlord trait (reduce all damage inflicted by 1 to a minimum of 1), and the wound regeneration of Soul-Eater Stave (gain a wound on a 4+ for every model destroyed by a psychic power).

Wings: The only caveat to add here is, of course, that if your opponent musters the firepower to kill the model in a single phase, Aura of Mutability operates exactly as a 6+ Feel No Pain would.

Khorne – Bloodthirsters Get Even Nastier

Last week we discussed the unholy power of the Bloodthirster of Insensate Rage when given the Slaughterborn ability which provides +1S and +1A when attacking. The combination slammed Wolf Lord Smashwolf Wolfsmash the 2nd down and allowed Khorne to rightfully regain his place atop the pillar of unbridled brutality. Well readers, it turns out the Lord of Slaughter isn’t done yet. Exalted Bloodthirsters have access to several new options such as the Arch-murderer ability which adds 1 to the Damage characteristic of every weapon the Bloodthirster wields. So what is the absolute nastiest option that can be fielded? For the comparison below we assume that the Bloodthirster is using the Locus of Rage Stratagem to re-roll hits for 2 CP and has the Glory of Battle Warlord trait. 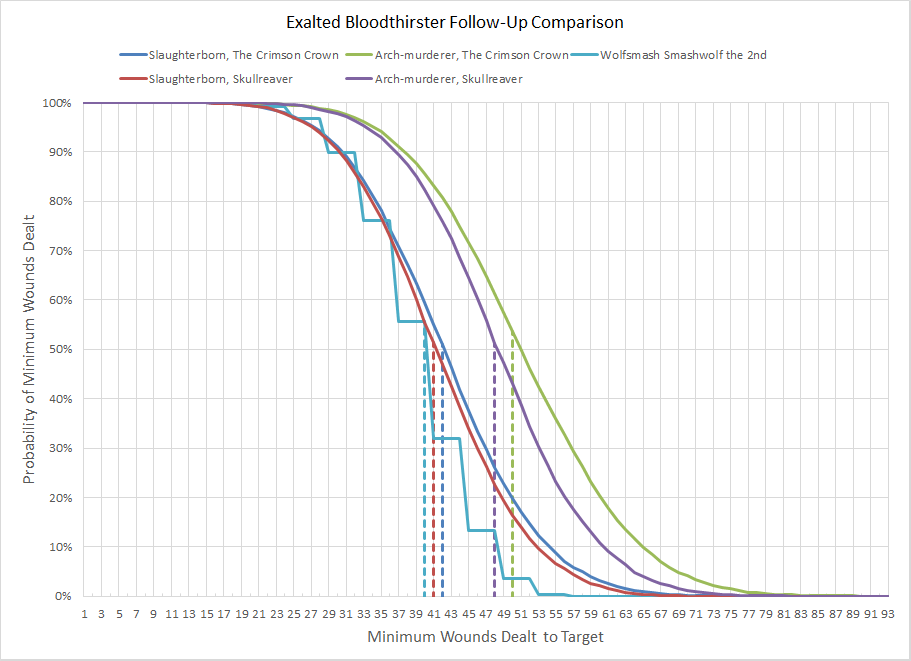 The nastiest combination is unquestionably a Bloodthirster of Insensate Rage with Arch-murderer and The Crimson Crown to get more attacks. Even with the ability to re-roll wounds and deal 1d3 mortal wounds on a wound roll of 6+ Skullreaver isn’t as effective as the bonus of additional attacks. 50% Of the time this monstrosity can kill two Knights in a single Fight phase, and that’s before you spend 3 CP to use Frenetic Bloodlust to fight a second time .

Those who have given their souls to Papa Nurgle have not been left wanting. Exalted Great Unclean Ones can be made incredibly resilient with the Revoltingly Resilient ability, which provides a 4+ Feel No Pain that takes the Great Unclean One from 27 effective wounds to 36. There is also Bloated with Corruption which takes the Daemon’s Toughness characteristic from 7 to 8. Which is better?

The first Hammer of Math article I ever did on this site discussed the basic probability train for Warhammer 40K and the effects of various modifiers. The probability that a given attack will succeed requires that four gatekeeper probabilities be successful, which is shown below.

The question is whether or not improving Toughness (and therefore the probability of wounding) is better than improving the FNP roll. For this we can ignore the Hit and Save rolls.

Great Unclean Ones normally have a 5+ FNP, so P(FNP) is 33%. With a 4+ P(FNP) is 50%. Because we’re looking at the probability of a wound inflicting damage we subtract the probability from 1. A 5+ FNP has a 66% chance of failing and a 4+ FNP has a 50% chance. Going from a 66% to a 50% chance is a -25% delta. In other words going from a 5+ to a 4+ FNP makes incoming attacks 25% less effective. In order to be more effective than increasing the Disgustingly Resilient roll, an alteration to the Toughness would have to produce a better than 25% reduction. Since Disgustingly Resilient works against all wounding sources including mortal wounds in the case of a tie we’ll go with the FNP improvement. The chart from the first article is very helpful in this situation.

Modifying the wound roll has a better than -25% delta when the original roll is a 4+ or worse. In other words Bloated with Corruption is only better than Revoltingly Resilient against S7 and S4 attacks. This is one of the hazards of abilities that affect Strength or Toughness instead of the wound roll directly; a lot of the time it doesn’t actually do anything. This may become more important in 9th Edition when modifiers to rolls are capped at plus or minus 1.

Amusingly enough the same calculations for Nurgle can also be applied to two abilities for Slaanesh; Quicksilver Reflexes gives an Exalted Keeper of Secrets a 4+ save instead of a 5+, while Blessings of the Dark Prince causes ranged weapon attacks against the model to take a -1 modifier. The change from a 5+ to a 4+ save causes a 25% reduction in effectiveness, but the wound modifier is universal. This means that Blessings of the Dark Prince is equal to or more effective than Quicksilver Reflexes against any attack with a wound roll of 3+ or worse.

In addition to several protective measures that make the very lethal Exalted Keepers of Secrets more survivable, models with Realm-racer can establish a very dangerous threat range. A Keeper of Secrets has a base movement of 14″ which is improved to 16″ under Realm-racer, along with a +1 bonus to Advance and Charge rolls. For additional speed one can take the Celerity of Slaanesh Warlord trait to add 3″ to the Warlord’s Movement characteristic. Thanks to Locus of Swiftness allowing the model to Advance and Charge the total resulting threat range is 19″ + 3d6″. 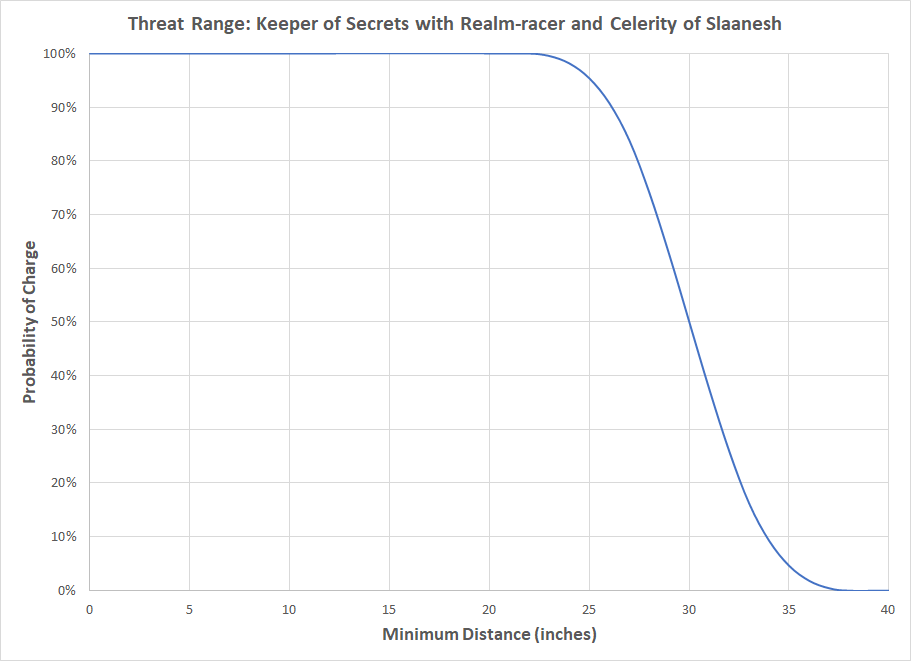 Subtract 3″ from the chart if you choose to omit Celerity of Slaanesh. Assuming you keep it, before re-rolls you have a 50% chance of reaching a target 30″ away in a single turn. This should prove to be particularly threatening when 9th Edition comes around and the standard table size is 44″ x 60″.

We’ve only covered one faction from Engine War, so expect a lot more coverage between this and the upcoming War of the Spider. And then 9th Edition will likely pop up and we’ll have all sorts of new things to cover. For Chaos Daemons this update has provided a lot of interesting options and capabilities, from the most devastating unit in the game to one of the fastest. The Chaos Gods are definitely pleased.