Engine War was packed full of content for Chaos Daemons, Adeptus Mechanicus, and both the smooth and spiky Knight factions. We covered the content that GW previewed and followed up with a look at the four flavors of Exalted Greater Daemons. Wrapping up our coverage of Engine War this week will be a look at the math behind the Imperial Knight, Chaos Knight, and Adeptus Mechanicus options.

The Adeptus Mechanicus get access to several abilities to enhance their offensive firepower. Mars units can use Panegyric Procession to ignore the movement penalty for heavy weapons and provide a +1S bonus. This is more useful in 8th than it will be in 9th as only INFANTRY will suffer penalties for moving and firing heavy weapons. Another interesting option are custom Forge Worlds. For example you can create a Data-Horde Forge World that use Trans-Node Power Cores to give all arc weapons an extra hit on an unmodified roll of 5 or 6. This applies to both ranged and melee weapons, enabling a significant boost to units like Kataphron Breachers who can be equipped with a Heavy Arc Rifle and an Arc Claw. This can be further enhanced in the presence of a Warlord with the Divinations of the Magos trait and the Overloaded Safeguards ability which provides an additional hit on unmodified hit rolls of 6 (a bonus which any force can use thanks to the 1 CP Stratagem Mechanicus Locum which allows a second CHARACTER to take a Warlord trait. From an expected value standpoint cumulative extra hits are extremely powerful, as they not only directly influence a driving attribute but also bypass one of the gatekeepers. For a unit with a 4+ BS this effectively doubles the number of hits that land. To take a look at the effect let’s compare the Mars and Data-Horde Forge options. We’ll take a unit of 3 Kataphron Breachers firing Heavy Arc Rifles. For Mars we’ll assume Belisarius Cawl is nearby for re-rolling hits and that Panegyric Progression is also active. The targets will be a Primaris Space Marine, Centurion, Predator-class vehicle, and a Repulsor-class vehicle. 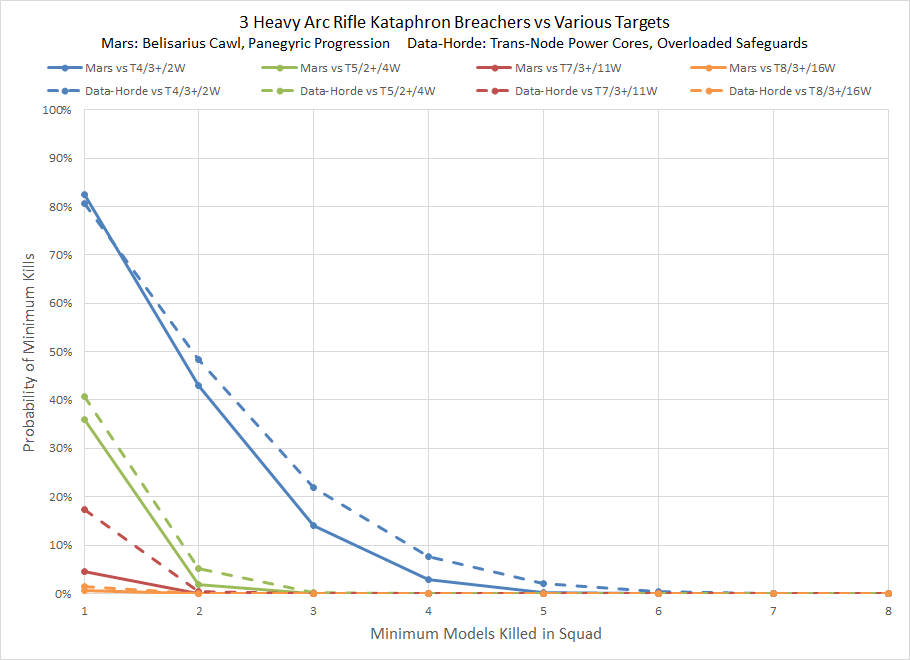 The result is an improvement in offensive output across the board, particularly against light vehicles where the additional hits really compound the damage boost. We even see that there’s a possibility of 3 Breachers killing a Repulsor, although unfortunately the vast majority of attacks did three or less damage. The Panegyric Progression canticle was surprisingly milquetoast in this analysis as the boost from S6 to S7 doesn’t really affect much due to how the wound system works.

Back in 2018 when the Imperial Knight codex first came out, I was incredibly excited by the Knight Preceptor. In fact I was so excited that I modeled and 3-D printed my own las-impulsor so I could field it at the NOVA Open. Unfortunately the Preceptor is much more exciting on paper than it is on the battlefield, although fielding one with the Helm Dominatus and a horde of Armigers is immensely satifying when it works. Apparently Games Workshop agreed that the Preceptor could use a boost and added Capacitor Charge to Engine War. This 1 CP Stratagem changes the High Intensity option of the las-impulsor from Heavy 1d6 to Heavy 6. How much of a boost is that for the S12, AP-4, 1d6 damage weapon? And how much of an improvement is it over the Questor Mechanicus warlord trait Cold Eradication which allows the bearer to roll an extra attack die and pick the highest? 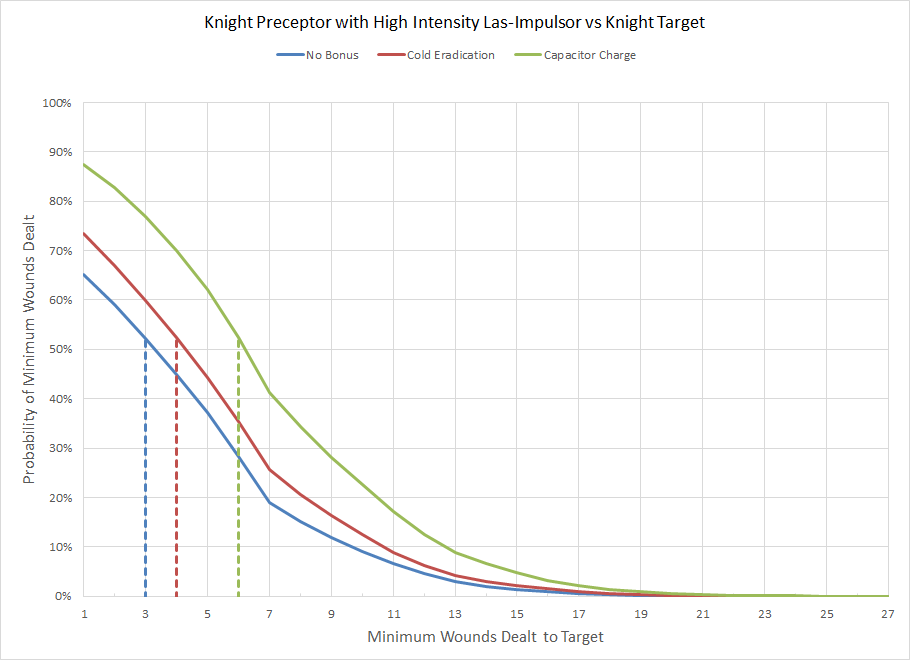 The benefit of the Cold Eradication Warlord trait translates to roughly an additional wound against the kind of high toughness targets that a las-impulsor is designed to deal with, while the Capacitor Charge Stratagem roughly doubles the mean output. The “No Bonus” curve shows exactly why the Preceptor suffers as a weapon; one third of the time it simply does nothing. Of the two options I would likely be more inclined to choose Cold Eradication, as it does not require a CP expenditure every turn and also works on the low-intensity setting which is capable of doing significant damage to targets like Primaris Marines.

One of the key differences between Imperial Knights and their counterparts is the freedom that Chaos Knights get to wield weapons. While every Imperial Knight with a ranged weapon is also required to bring a melee weapon, embracing the powers of Chaos allow a Knight to go akimbo with weapons the size of tanks. This can be particularly useful when applied to the new Dread Household bonds which allow a faction to select from a variety of benefits. One such example, Endless Torment, allows you to re-roll a single die when determining the number of attacks that a model makes with a weapon. The designers felt this ability was so powerful that it should count as two options. Given what we know about probability, is Endless Torment better than combining Pinpoint Cruelty (re-roll a single damage die) with Infamous Heredity (which allows a single hit roll to be re-rolled), or the Titankin bond (re-roll one hit and wound roll) for House Vextrix? 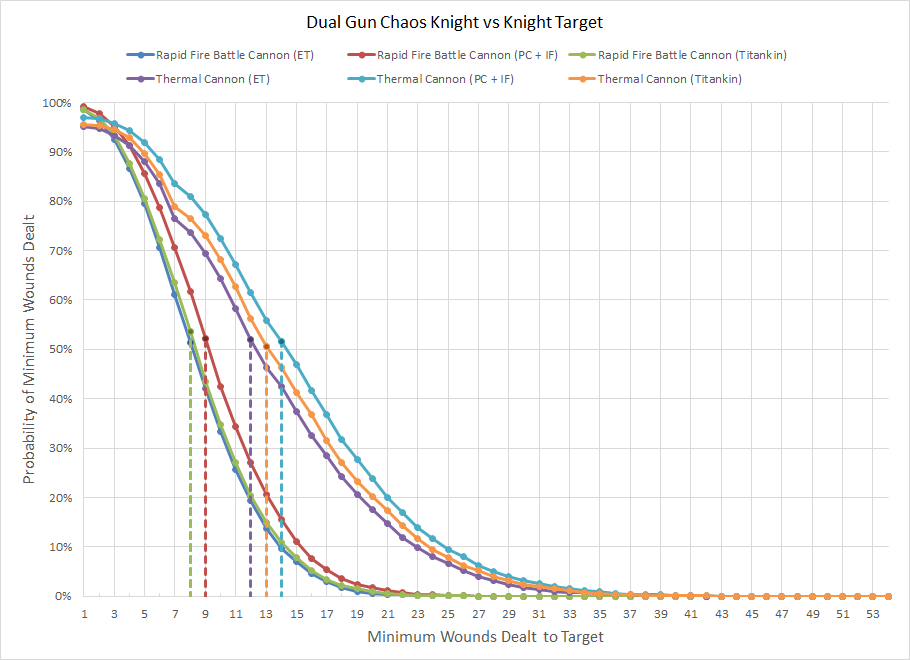 Like many Psychic Awakening releases, Engine War provides a large amount of fresh content for players of all factions to sink their teeth into. With so many options it can be difficult to choose. Hopefully the information in this article can help you make an informed decision about how to best use the new material. We expect to have similar coverage of the two remaining Psychic Awakening releases, and then of course there will be 9th Edition in July.