With Engine War now available for pre-order we here at Goonhammer are extremely excited about all of the options the new rules open up for Chaos Daemons, Imperial Knights, Chaos Knights, and the Adeptus Mechanicus. Unfortunately we’re in the same boat as everyone else, so this week Hammer of Math is going to look over the publicly available information from Warhammer Community and see if anything fun pops up.

The previews include some incredible abilities in the form of a set of 1 CP Stratagems that enable you to elevate a greater daemon to Exalted status, giving them either a single ability from a list of six or randomly choosing two. While there isn’t a limit on how many times you can use this Stratagem (something that will get very interesting in 9th Edition when Command Points are based on the size of the army and not the type and quantity of Detachments), there are some limits: A greater daemon can only be affected once, and you cannot choose the same Exalted power for two Exalted greater daemons – if you want to have duplicate powers, the only way to do it is by rolling.

This opens up an interesting question: What if you do want to have a specific Exalted power on multiple greater daemons? How likely are you to get the power you want if you have to roll for it? Let’s assume you have three Bloodthirsters, and you want all three to have the Slaughterborn trait (see below) – what are the chances you can get it on all three?

Well, your chances on one are easy – 100%, as you’ll just pick that one. If you want to roll though, you’ll be generating two traits every time out of six possibilities (you re-roll on doubles), giving you a 1/3 or 33% chance of generating a pair of traits that includes the one you want. Your chances of getting the same trait across all three are 1/9 or about 11%. Not so great, but if you only care about getting it on two of the three, your odds are decent – about 56%.

For something like Slaughterborn this could be pretty important.

For quite some time, the Bloodthirster of Insensate Rage was the undisputed champion of the Smash Captain comparison. He was the gold standard of murder, an unrelenting horror show of death and destruction with an unprecedented 97% chance of killing a Knight in one turn. Even a fully boosted Librarian Dreadnought or a Smash Captain from a custom Chapter specifically dedicated towards being awesome in melee couldn’t reach that level of performance. Then Saga of the Beast came around and we got to experience the amazing insanity of Wolf Lord Wolfsmash Smashwolf the 2nd. Thanks to the absurdly powerful Hunters Unleashed Stratagem which effectively increases the number of attacks by 50% this particular Smash Captain has a 99% chance of killing a Knight in one round. With the presence of Slaughterborn will the King regain his crown? 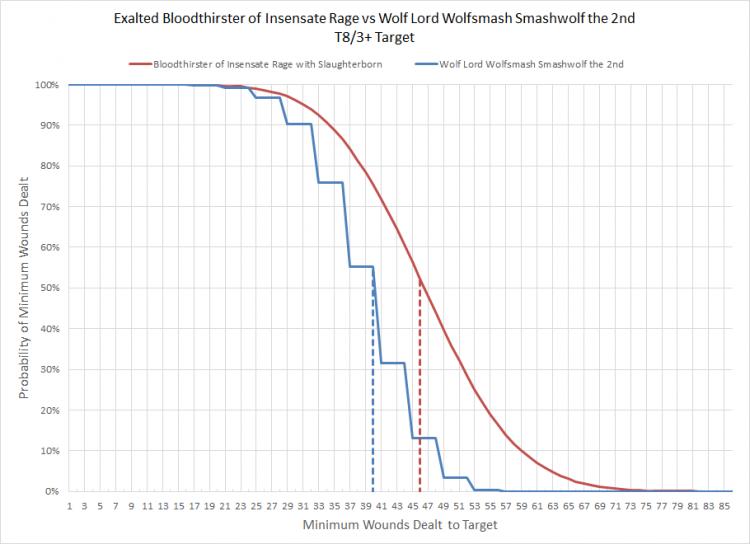 Hail to the King, baby. Anything that adds attacks has a significant impact on the damage output, and this is particularly true with the multiplicative impact of Deathbringer and The Crimson Crown. Depending on what other Relics, Stratagems, and abilities are available this could get even more terrifying.

Armiger Helverins and Thin Their Ranks

The Armiger Helverin is a remarkably useful long-range platform thanks to ability to unload 4d3 S7, AP -1, 3D shots from a 3+ BS platform. Warhammer Community revealed a new Stratagem for Imperial Knights players call Thin Their Ranks which makes them even nastier; for 1CP you are guaranteed to get 12 shots from one walker.

On average 4d3 will provide 8 shots, so getting a guaranteed 50% improvement is definitely worth taking a look. Since the Stratagem is limited to units of 6 or more models we’ll take a look at some representative threats that might be applicable such Primaris, Centurions, and Hive Guard. 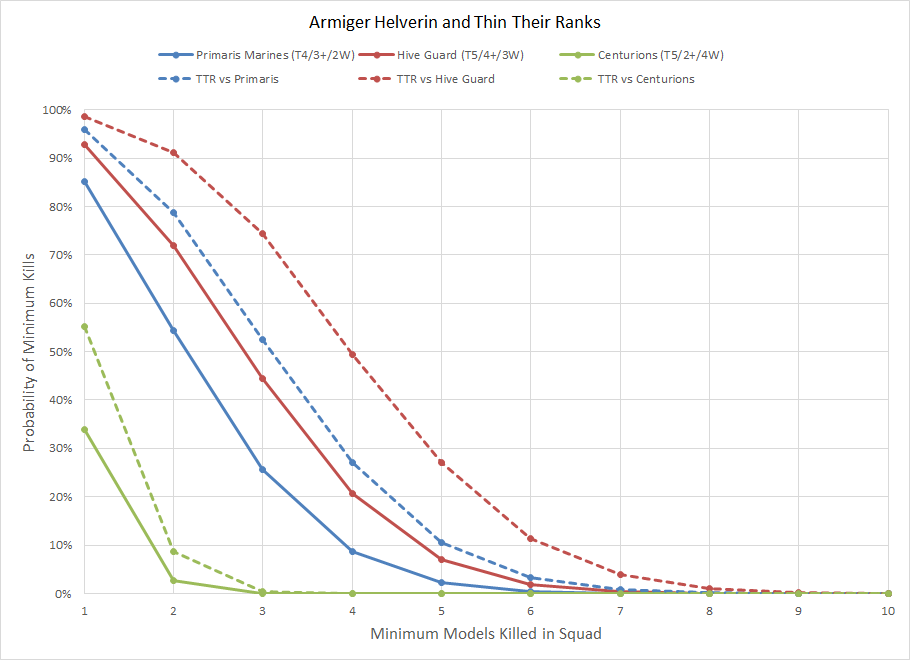 Primaris and Hive Guard definitely suffer a considerable amount, with the maximum shots translating to a roughly extra shot going through. Unsurprisingly the low AP of the armiger autocannons poses a challenge and nullifies the benefit significantly, particularly for 2+ models like Centurions. The lines will also apply for any other unit with a toughness between 4 and 6 with a 3+ or 4+ save. Against Deathwatch Fortis Kill Teams this is an extremely unpleasant ability, as many Kill Teams use maxed out complements of Aggressors or Inceptors to give the whole unit T5.

Chaos Knights can expect a major boost with tons of new content, including special Houses, new Stratagems, and new Relics. One particularly interesting option is House Vextrix and the Heretek Power Core Relic which increases the Movement characteristic of the bearer by 1, adds 1 Damage to a reaper chainsword or thunderstrike gauntlet, and increases the chance that the unit will explode. Chaos Knights have access to two other devastating melee weapons; The Teeth that Hunger which hit like a thunderstrike gauntlet while also granting an extra attack and The Gauntlet of Ascension which allows the bearer to re-roll hit and wound rolls (and also makes the bearer nastier every time it kills a CHARACTER). So which of these three Relics are the most effective? We’ll assume that the bearer is a Knight Rampager with the Knight Diabolus Warlord trait for the additional attack. 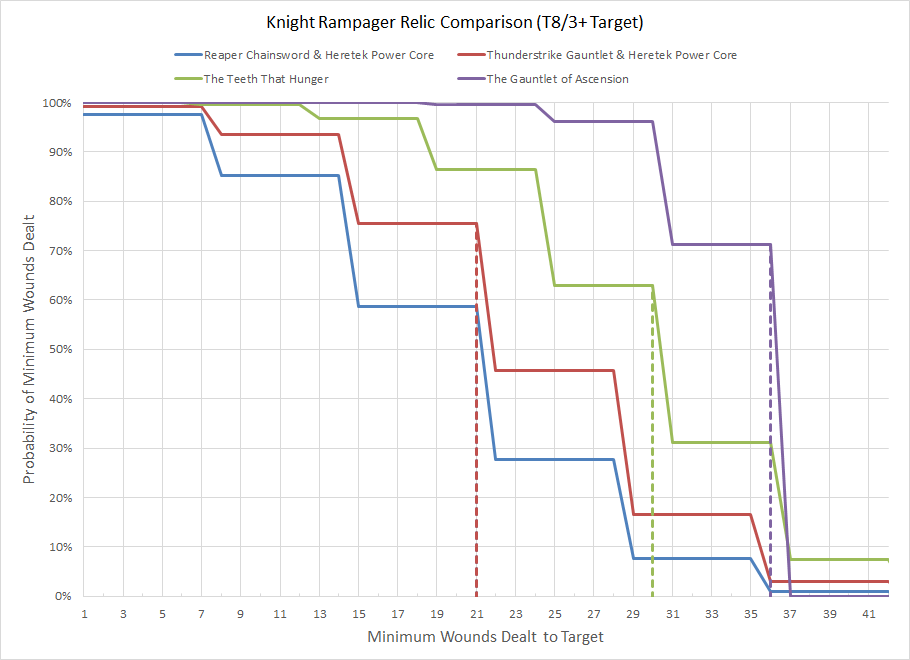 As nasty as the Heretek Power Core is (and is it nasty, one-shotting another Knight 92% of the time with the thunderstrike gauntlet), the boosted damage is less impactful than the bonuses of the legacy Relics. The Teeth That Hunger wound T8 on a 2+ and get an extra attack, while The Gauntlet of Ascension not only remove the -1 hit penalty but also practically guarantees that every attack is going to hit thanks to re-rolling 1 on a 2+ to hit and wound. Both Relics form solid options that will reliably kill a Knight target (or nearly anything else) in a single turn of combat. Depending on what other goodies are available this could get even more impressive, but as of right now the Bloodthirster of Insensate Rage remains the nastiest combatant in 40K.

If the previews are anything to go by, Engine War should have an immense amount of content for us to explore. I’m particularly interested in seeing how the new rules will add flavor to the two Knight factions, and also what the other options are for the Exalted Greater Daemons. There’s also the Adeptus Mechanicus to consider, who should be able to produce some very fascinating combinations. Once Engine War is out expect a lot of coverage from this series and all of Goonhammer.