If there’s one thing that’s been talked about since the revelation of 9th edition and Codex: Space Marines in particular, it’s the immense potential of the Eradicator. Already a standout from the Indomitus box, Codex: Space Marines takes things to a new level with the addition of new options, new melta rules, and the ability to take six of them in a single unit. This week we’ll take a look at the potential of the Eradicator, and what each Chapter can do to make them even nastier.

Eradicators have been a mainstay since 9th edition dropped. 40 points per model gets you access to a mid-range melta unit that can double the number of shots they fire if they don’t Advance, connected to a T5/3W/3+ Gravis statline and firing from a BS of 3+. While the original melta rifle was fantastic at S8, AP-4, and 1d6 damage things have become even more devastating thanks to the new melta rule (+2 damage if you’re within half range) and the option to bring either a multi-melta (now with twice the shots) and the new heavy melta rifle (+2 damage). This means that a full Eradicator squad of 6 models has the opportunity to fire 14 S8, AP -4 shots with 10 having a damage of d6+4 and the other four at d6+2. Note that the heavy melta rifle comes at a 5 point premium, while the multi-melta costs an addition 10 points.

One of the first choices every Space Marine player needs to make is what loadout to choose, specifically with respect to a heavy melta rifle or not. The difference is simple; 5 more points gets you 2 more damage at the expense of needing to take a -1 to hit penalty when moving. The chart below shows a variety of outcomes for a typical T8/5++ target, and the results indicate that even with a movement penalty the heavy melta rifle will average more damage at the expense of doing no damage 40% of the time as opposed to 30% for the assault version. The biggest benefit of using the melta rifle is that it’s an assault weapon and so players have a bit more range, but Games Workshop decided to change Total Obliteration so that it only works if the unit did not Advance. The heavy melta rifle is simply the superior option. 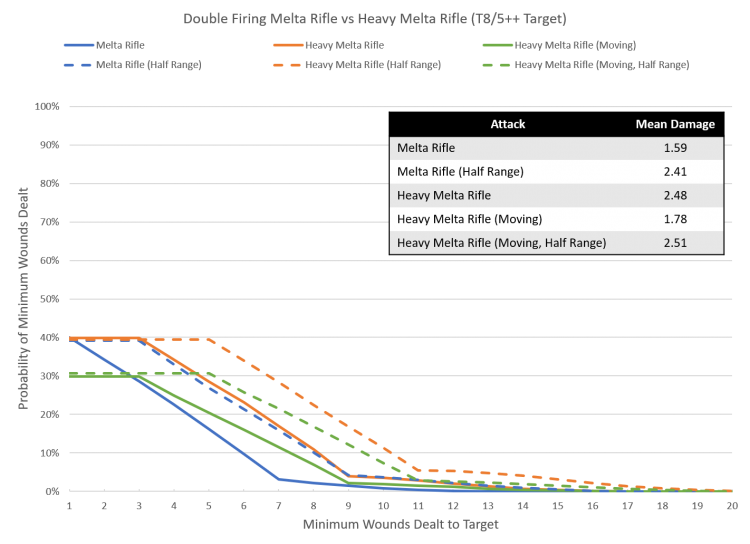 A full squad of six Eradicators armed with heavy melta rifles and two multi-meltas comes out to 280 points. We’ll take a look at how much damage that can deal to a variety of representative high value targets such as a Knight, Tank Commander, and a Plagueburst Crawler. We’ll assume that the attacker was able to position themselves to be within half range, and that there are no movement penalties courtesy of one of the myriad of Stratagems and abilities that enable it. 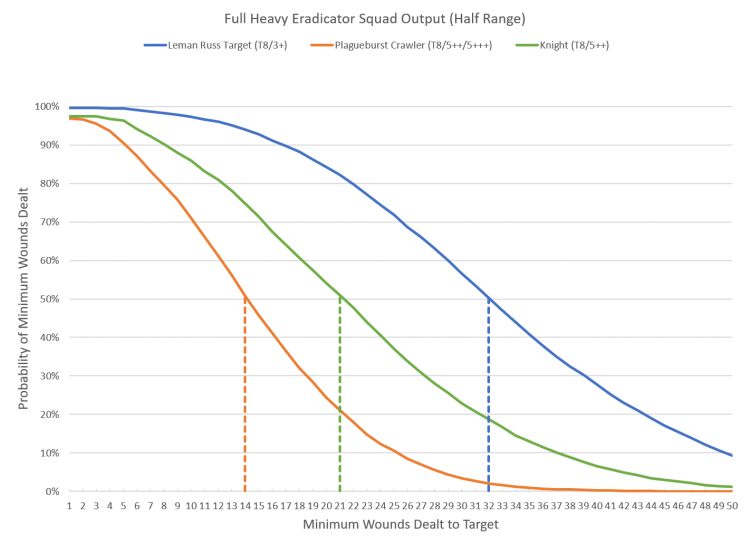 To be blunt, a squad of six Eradicators at half range does enough damage to wipe out any target that doesn’t have an invulnerable save. Just one more reason to leave the Repulsor Executioner at home, and even an unprotected Baneblade is going to be vapor. Astartes players may want to invest in a Librarian with Psychic Fortress for the 5++ aura. The Plagueburst Crawler is (disgustingly) resilient thanks to the wonders of a 5+ Feel No Pain and an invulnerable save. Even the 24 wounds of a Knight won’t be enough to save it 40% of the time.

There are quite a few options that every Chapter gets access to in order to bolster their abilities. Re-rolling hit or wound rolls of 1 is very viable with a Captain, Lieutenant, or nearby Dreadnought with Wisdom of the Ancients (1 CP). If the Captain is upgraded to a Chapter Master then the unit can be chosen to re-roll all hit rolls. A nearby Chaplain can use Recitation of Focus to give them +1 to hit and Catechism of Fire to give them +1 to wound if the target is closest, but note that this requires the unit to be on the board during the Command phase unless Commanding Oratory (2 CP) is used (which would also mean you only get one of the two). Any Eradicator unit can benefit from Steady Advance (2 CP) if it made a Normal move to count as stationary. A huge change for the new codex is the presence of Adaptive Strategy which allows a unit that is on the battlefield in the Command phase to count as if all three doctrines were active.

Dark Angels get a +1 to hit if they remain stationary, and they’re more likely to get within half range thanks to a 6″ bonus for heavy weapons and a 3″ bonus for assault weapons in the Devastator Doctrine. Since they’re currently in Index limbo there are no faction-specific Stratagems that will apply and the previous ‘count as stationary’ litany that would have been extremely useful here is gone.

Imperial Fists deny the benefits of Light Cover with ranged attacks, and as the melta is S8 attacks with the heavy options will deal an extra point of damage in the Devastator Doctrine against VEHICLES or BUILDINGS. Tank Hunters (2 CP) also gives a +1 wound bonus against VEHICLES, and if you brought a BUILDING against Imperial Fists then a) why and b) you’re going to pray your opponent forgets Sappers (1 CP) for a +1 to hit and wound. Crimson Fists get access to the same Stratagem, but it’s unlikely they will see their Chapter Tactic activate for a +1 to hit as it requires the target to be five models more than them. Or they can use Slay the Tyrant (1 CP) to get +1 to hit CHARACTER units.

Salamanders have often found themselves being Successor Chapters for take advantage of Long Ranged Marksmen, but for those who stick with the original tactic can re-roll one would roll per attack. Since this is a melta weapon the attack will have a +1 wound modifier in the Tactical Doctrine, or they can use The Crucible of Battle (1 CP) to get a +1 to wound at other times. They can also use Relentless Determination (1 CP) to count as stationary for less CP than Steady Advance.

Deathwatch can re-roll wound rolls of one if the target belongs to the correct Battlefield Role. They’re also the only Chapter which, as of this article, can field up to 30 Eradicators as Troops. You just need to also bring 30 Heavy Intercessors along for the ride. Their Index contains no Stratagems, at all, so learn the ones from the Codex.

Ultramarines count as stationary when they make a Normal Move in the Tactical Doctrine and of course Bobby G is a re-roll machine.

Iron Hands will not have to deal with any hit penalties in the Devastator Doctrine, and thanks to Methodical Firepower (1 CP) will be able to get two units into Devastator Doctrine (but they have to be on the board at the beginning of the Movement phase).

Raven Guard will absolutely murder the target if it’s a CHARACTER thanks to a +1 to hit and wound in the Tactical Doctrine. Sorry Knights and Tyranids.

The most common effects are +1 to hit, +1 to wound, and re-rolling 1s to hit and wound. We’ll use a T8 target with a 5++ invulnerable since we already know T8/3+ is destined to be murdered and there are a lot of targets with a 5++ profile. From the first article in Hammer of Math  we know that there’s no difference between re-rolling a 1 to hit or 1 to wound; both have the same change in the overall probability. Again we assume that there are no movement penalties. 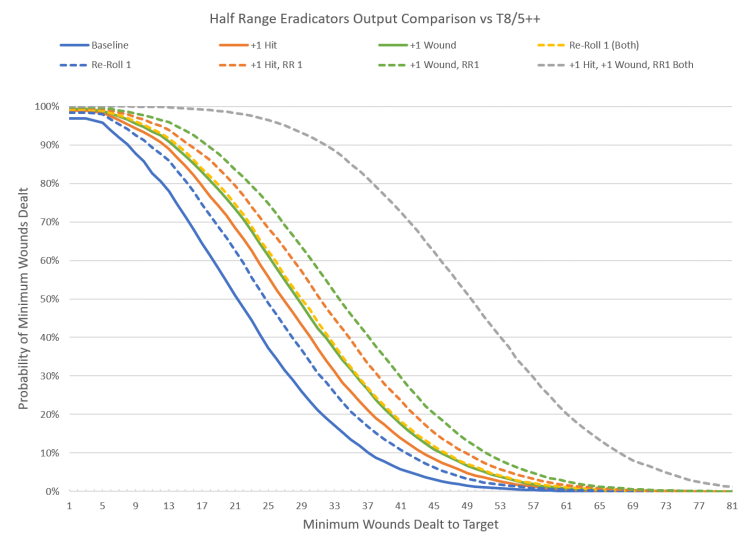 As expected, modifiers provide more of an impact than re-rolls but even a single re-roll of 1 is sufficient to improve the average damage enough to kill a Knight in one turn. Re-rolling both hits and wounds has the same impact as modifying the wound roll (which in this case has a lower probability than the hit roll, hence why a +1 to wound has more of an impact than a +1 to hit), and of course the synergistic effects can quickly get absurd. The output is high enough that it may be worth using Combat Squad to divide the unit into two units of three in deployment (note that there is no longer a Stratagem to let you do this during the game).

We’ll wrap up this article with some love for a Chapter which hasn’t seen a lot of it recently; the Imperial Fists. For whatever reason Games Workshop has decided these guys just shouldn’t have nice things, but they remain the unquestioned champions of destroying BUILDINGS thanks to their doctrine ability and Stratagems like Sappers. So let’s see exactly how nasty they can be against a myriad of targets that will never actually be seen on the battlefield. In this case we’ll go with the best possible output with bonuses and re-rolls of 1 to hit and wound as well as the damage bonus. 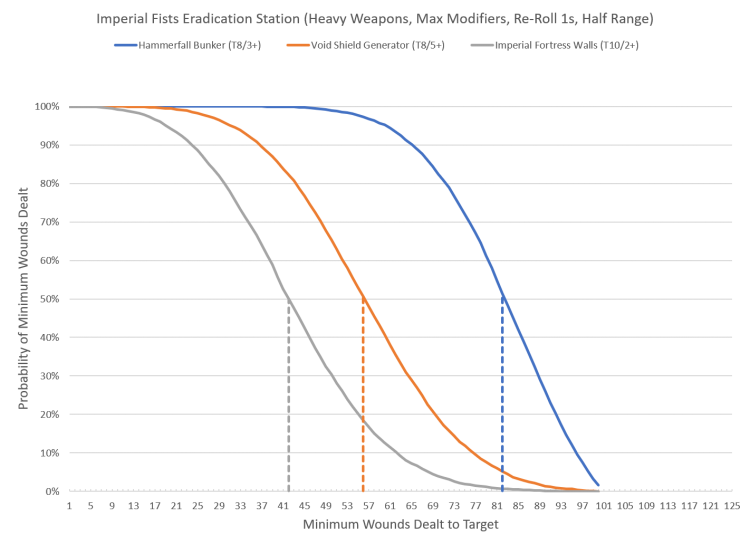 For those who are curious, the Imperial Fortress Walls have 40 wounds and cost 898 points. A single squad of Imperial Fists Eradicators will deal enough wounds to kill, on average, five Hammerfall Bunkers.

There’s no other way to say this; Eradicators offer a level of potential firepower which is incredible for how much they cost. The combination of Strategic Reserves and smaller board sizes plays right into their strengths.