We’ve been linking a questionnaire form for you fine readers to submit ideas for us to explore, and this week we’re taking another look at questions submitted by readers. We’re wrapping up the year with some questions about the Aeldari and the Fire Prism tank.

Craftworld Fire Prisms: Which fire mode should you choose against different targets? When is it best to link fire? How does Expert Craftsmen fit into it?

The Craftworlds Fire Prism is a floating gun that happens to have a tank wrapped around it. Its primary weapon is the prism cannon, which has three firing modes that can all reach out to a 60″ range.

In addition, all Fire Prisms have the Pulsed Laser Discharge ability which allows the prism cannon to fire twice against the same target if the model moved under half speed in its Movement phase, which means in general those profiles above will usually get double the number of shots. So for purposes of this exercise we’ll assume that the Fire Prism is stationary so that it shoots twice and has a BS of 3+. The other relevant ability to consider is the Linked Fire Stratagem, which costs 1 CP and allows a Fire Prism to effectively channel its prism cannon shots through another Fire Prism at a designated target. The benefits of this are that only the first Fire Prism needs line of sight to the target, and that all of the attacks channeled this way can re-roll to hit and to wound rolls.

So the first question we’ll answer is Christopher’s second. When is it best to used Linked Fire? This isn’t so much a mathematical question as a tactical one, but the answer in general is that Linked Fire is always a good choice. For 1 CP you get a flat 33.3% increase in the number of attacks that will hit (assuming no modifiers to the hit rolls), and a 16.7% to 83.3% increase in the number of hits that will wound. Since hits and wounds are multiplied the net bonus ranges from a 55.6% increase (for an attack that needs a 2+ to wound) to a 144.4% increase (for an attack that needs a 6+ to wound). The only exceptions to this situation would be tactical, such as if you don’t have enough CP, or the target is weak enough that it’s unlikely to survive a single prism cannon attack without the effect, or the opponent has defensive reaction Stratagems that they can apply to render the bonus a waste.

So let’s focus on weapon profiles. What are the targets in which each profile would be preferred? We can figure this out as an expected value problem, looking at the mean damage dealt as the product of the various probabilities and average result of the die rolls (average of a d3 is 2, average for a d6 is 3.5). For this exercise we will assume that the platform is stationary and that the Linked Fire Stratagem is active. For example a dispersed profile attacking a T4 target with a 3+ save will average 7 shots, hit 89% of the time, wound 89% of the time, get past the armor 83% of the time, and deal 1 point of damage for an expected value of 4.61 points of damage dealt per activation. The major caveat here is that the damage is capped depending on the number of wounds of the target, so we’ll need six charts to properly show this. 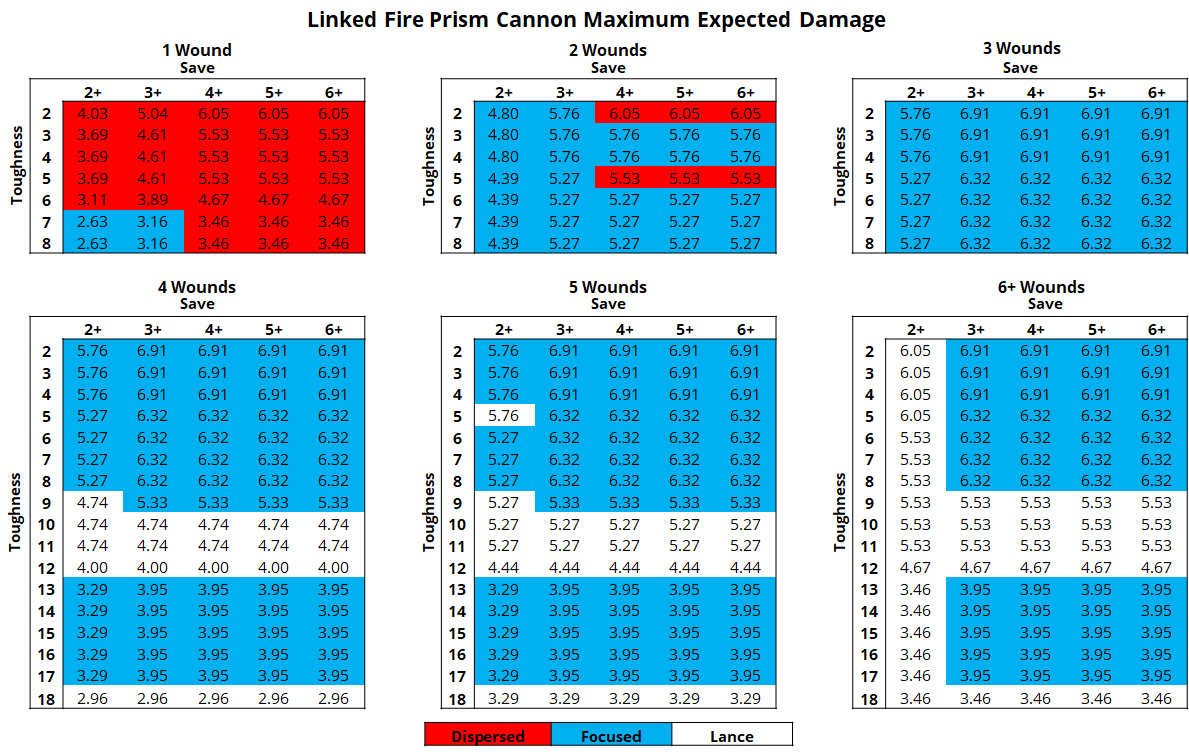 Each chart represents the number of wounds the target could have; for most threats the bottom right table with 6+ wounds will be the most relevant. The individual cells show the expected damage against a target of a given toughness and save. Cells shaded red deal the most damage with a dispersed attack. Shaded blue is a focused attack, and white cells are a lance attack. For example against a T8 target with a 3+ armor save the best option would be a lance attack, which would be expected to deal between 5 and 6 wounds. The major takeaway here is that for the vast majority of scenarios for a Fire Prism utilizing, the focused profile is the superior choice. The exception being that the lance is better against most T9 to T12 targets, and against 6+ wound targets with a 2+ armour save.

Note that Feel No Pain-style damage ignoring abilities would have no impact on the relative outcome, nor would modifiers to the hit roll or the number of shots. Each would influence the expected values equally for all profiles. One thing that could potentially influence the difference is the presence of an invulnerable save. Since the primary target for these systems is high-wound threats like Knights and Repulsors, let’s look at what happens when you take on a threat which could cap out the save.

The high armour penetration value offered by these weapons even in dispersed fire mode means that in general the presence of an invulnerable save won’t do much to alter our probabilities. The biggest difference is in the first column against targets with a 2+ save. Here the difference in penetration between the focused and lance profiles becomes irrelevant and the only thing that matters is the difference in shots, damage, and wound rolls. Against targets with an invulnerable save there is a limited region between T9 and T12 where the lance is the superior profile, and otherwise the focused profile will do the most damage. It should be noted that the difference between the Lance and Focused profile for a T8 target is only a third of a wound.

Phoenix Rising included some options for custom Craftworlds, and of particular interest is the Expert Crafters trait which allows a model to re-roll one hit and one wound each time a unit shoots, fights, or fires Overwatch. The basic effect is identical to Linked Fire, but since it only works once per attack the efficacy is reduced as the number of shots increases. This makes it preferable for low quantity, high quality attacks such as the lance profile where the probability of both shots missing is only 11%. Since the number of scenarios for this application can easily become a mess let’s take a more general approach and look at a specific situation; blasting a Knight into pieces. 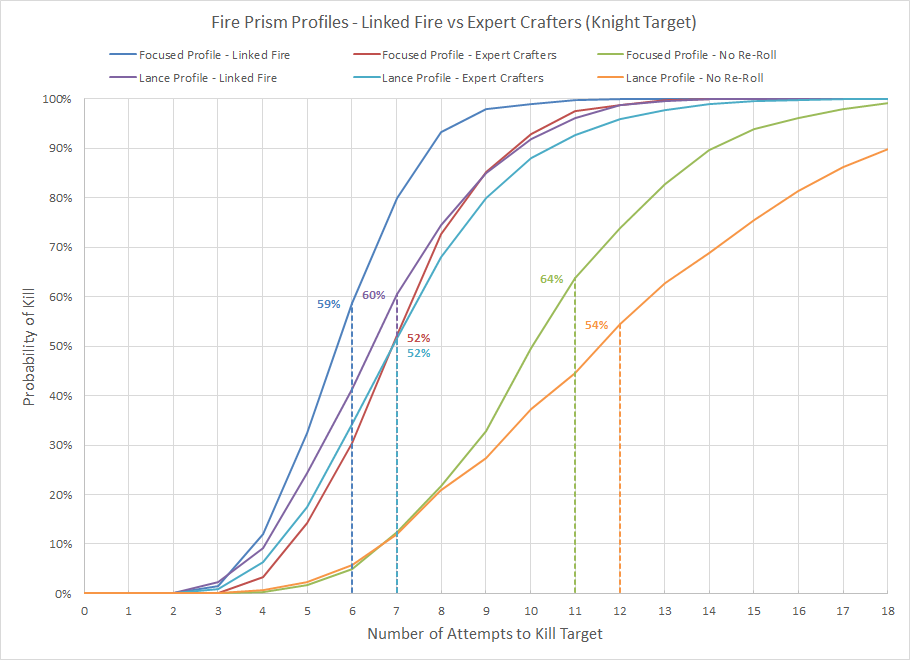 We get a few major takeaways here. The first is that, in a vacuum, Fire Prisms suck at killing Knights. Three of them need an average of two rounds of Linked Fire to kill one, and that’s a massive investment of time and points compared to what other armies can do in a single round. This doesn’t include all the shenanigans that Eldar can to do make a target more vulnerable such as the Jinx power, but the effect of Linked Fire is identical to Guide and Doom so it’s not entirely off. The second takeaway is that while the difference between Linked Fire and Expert Crafters is significant, Expert Crafters by itself is a massive benefit over having no re-roll at all. As expected Linked Fire has the least benefit for the Lance profile which has the fewest hit and wound rolls. 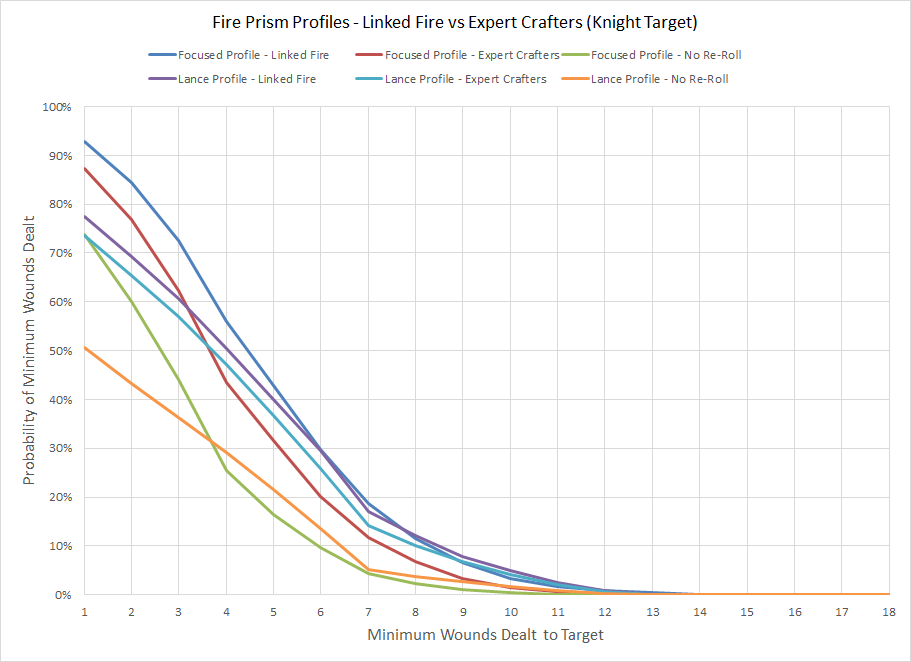 We can follow up with an analysis on the variation of each shot. The best way to do that is by looking at the probabilities of minimum wounds dealt, which is in the chart above. The average damage dealt per attack is seen at the 50% value; half the time the attack will deal at least that much damage, half the time the attack will deal less. You can see that the jump from Expert Crafters to Linked Fire increases the mean damage dealt from the focused profile by approximately one wound, while the difference on the lance profile is negligible (maybe one third of a wound).

Thanks to Christopher for the question! I hope the information above is useful and provides some perspective and guidance (Get it? Like the power?) that will be useful in figuring out how to best blast your foes with the power of xenos-crafted lasers. If you have any feedback, feel free to drop a note in the comments below or email us at contact@goonhammer.com. If you have any questions that you would like answered, please submit them here.