Hammer of Math: Get Down With the Clown

This week’s Hammer of Math will look at the new, previously unseen content that Games Workshop released for Harlequins in the latest issue of White Dwarf.

While Psychic Awakening has been hit or miss for many factions, Harlequins got a huge new boost with 12 new abilities, 9 new Stratagems, and 6 new Relics that promise to open up a lot of interesting combinations and effects. Our resident Aeldari players are extremely excited, and rightly so. These options open up a lot of things for Harlequins as solo forces or when combined with Asuryani or Drukhari, and should give these factions a significant boost.

Troupe Masters and The Twilight Fang

The Troupe Master is a 60 point HQ which received several significant improvements. First up are several abilities that can either replace or supplement Choreographer of War (re-roll wounds in the Fight phase), most notably Darkness Bites which provides a guaranteed 2 mortal wounds on one target he attacks in the Fight phase. With the Pivotal Role (1 CP) Stratagem the Troupe Master can have both of these abilities. Another interesting option is the relic sword The Twilight Fang which allows the unit to attack at S5, AP-3, and 2 damage with an extra number of attacks equal to the turn. This can be as many as 12 attacks if the model is from the Frozen Stars masque and is charging on turn 6. Mathematically a 5+ to wound with a re-roll has a 5% better chance of success than a 4+ so this can be a threat to even T8 or T9 foes. Add in Murderous Entrance (2 CP) to add 1 to the Damage characteristic, and if you really want to be silly you could also add Great Harlequin (2 CP) to allow the unit (and other models within 6″) to re-roll 1s in the Fight phase, Torments of the Fiery Pit (1 CP) to add +2 to Strength and Attacks assuming the Troupe Master has taken a wound and War Dancers (3 CP) to fight a second time. Against INFANTRY, BIKERS, or BEASTS you can also use Malicious Frenzy (2 CP) to add 1 to the wound roll. From a Warlord Trait perspective you could consider Luck of the Laughing God to re-roll hits, wounds, and damage rolls of 1 (saving you from using Great Harlequin). Another alternative is Player of the Light which causes a mortal wound on a wound roll of 6+, which dovetails very well with Malicious Frenzy. For the most part these bonuses require the expenditure of a lot of command points that Harlequins are already fairly starved of, so it’s unlikely that someone would want to stack all of this.

Rather than go all out, we can focus on a more reasonable approach and simply look at what a Frozen Stars Troupe Master will do by himself given Choreographer of War and The Twilight Fang against a Primaris (T4/3+/2W) or Centurion (T5/2+/4W) target. We see below that even on the first turn the Troupe Master is practically guaranteed to earn its points back against Intercessor or Centurion targets, and as the turns escalate things can get even more egregious. Add Darkness Bites using the Pivotal Role Stratagem and you’re guaranteed an additional Intercessor kill and a 50% chance of adding another Centurion thanks to the two mortal wounds. Since the targets have an even number of wounds there’s no reason to use Murderous Entrance. 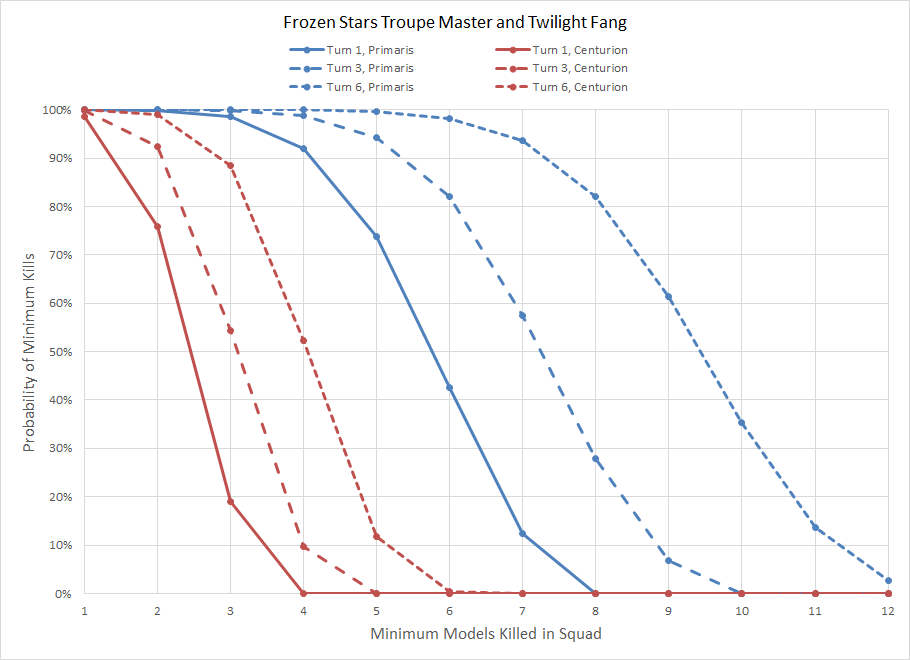 One might be inclined to wonder if the sheer volume of attacks available to a Troupe Master could give it a shot at hurting a serious target like a Knight in melee (T8/3+/24W). To maximize our chances of success we would want to use Pivotal Role to apply Darkness Bites for the guaranteed two mortal wounds, which will be doubled to four mortal wounds once we fight twice using War Dancers. We’ll also apply Luck of the Laughing God to maximize the number of hits that land on the target, and finally we’ll definitely need Murderous Entrance for the extra damage. If the Troupe Master is injured Malicious Frenzy will be helpful for getting an extra two attacks, although the +2S bonus will be irrelevant since the target is T8 and S7 wounds the same as S5. 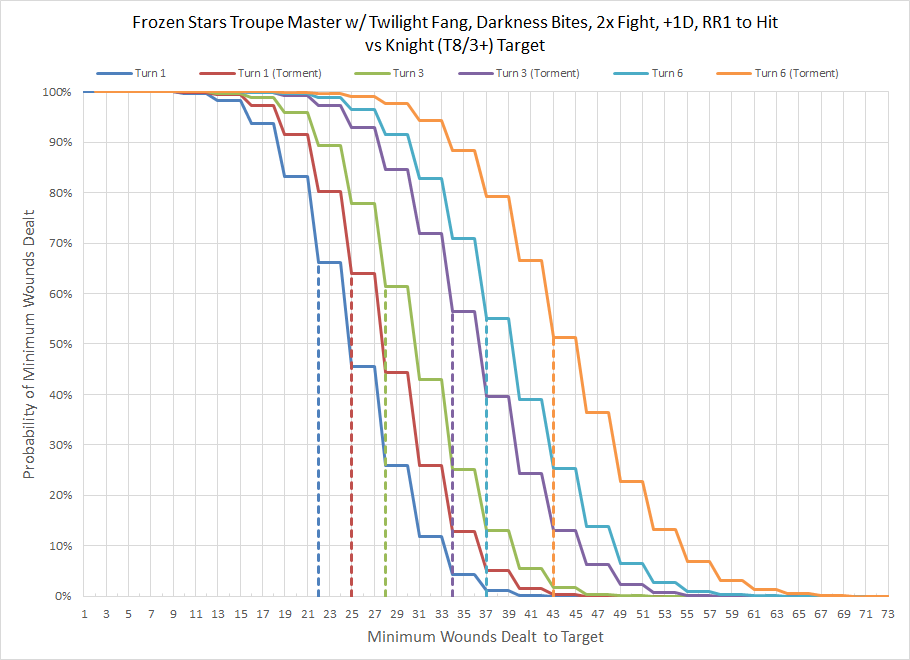 Sure it costs 6CP to pull it off, but holy crap it actually works. The sheer volume of attacks combined with four guaranteed mortal wounds means that even on turn 1 a boosted Troupe Master can do an insane amount of damage, with a 65% chance of killing a Knight in one shot even without Torments of the Fiery Pits.

On the ranged side of things are some very interesting options for Death Jesters. Although the fluff lists them as snipers, the rules make them extremely good at killing large squads. This is particularly true thanks to their new ability Harvester of Torment, which causes every hit against a squad of six or more models to count as three hits. This is particularly devastating when combined with Cegorach’s Lament, a replacement for the shrieker cannon which adds a -3 AP to all attacks and increases the damage of the wail profile to 3. This weapon also has an ability to deal 1d3 mortal wounds and a -2 Ld penalty to the unit if a model is slain using the wail profile, which means with Harvester of Torment you can potentially deal 3d3 mortal wounds and impose a -6 Ld penalty (Corrode: the generic version of the gun and the other relic, Curtainfall, both limit you to a max of -2. Being able to stack to -6 may not be intentional, and don’t be surprised if it gets FAQed). The fact that the attack is a single shot makes the Death Jester a great target for the new Mythic Role (1 CP) Stratagem which allows you to select one AELDARI unit to get one hit or wound re-roll each turn. For the purpose of this exercise we’ll compare the different profiles for Cegorach’s Lament with Harvester of Torment assuming no re-rolls against Guard (T3/5+/1W), Ork (T4/6+/1W) and Primaris (T4/3+/2W) targets. For all three targets the 3 shots of the shuriken profile will be compared to the single, potentially mortal wound inducing attack of the shrieker profile. 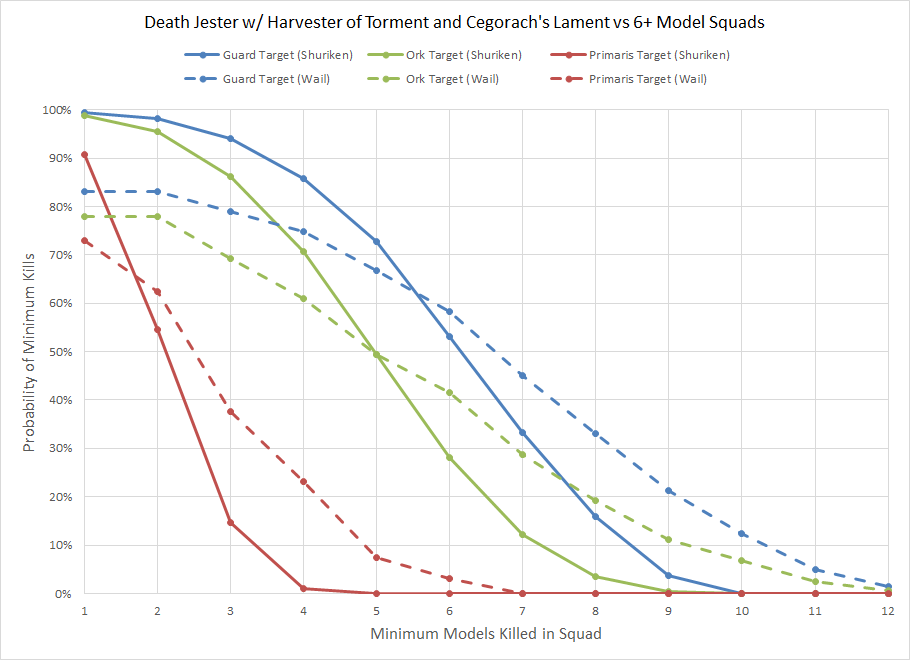 In every case we see that the probability of killing a single model with the shuriken profile, but the potential for a cascade of mortal wounds means that for killing larger numbers of units the wail profile is superior. This is precisely why Mythic Role is perfect for a Death Jester; the chance of hitting goes from 83% to 97% assuming you’re forced to use the re-roll to hit, but most of the time you won’t need to and the re-roll will instead be applied to a wound roll. The results above don’t include the high potential for additional casualties thanks to the penalty from Leadership. If you’re feeling particularly cruel you can add a second Death Jester with Curtainfall who has to only kill a single model with either profile to cause an additional -2 penalty to Leadership (Corrode: again, this is all contingent on Harvester not being FAQed).

Harlequin and Aeldari players should be rightfully excited at the possibilities these new abilities provide them. We see that properly supported a Troupe Master can become a serious threat to most units in the game, and a Death Jester serves as a reliable way of clearing out everything from Orks to Primaris Marines. Don’t be surprised to see Harlequins pop up much more often; fortunately we’re working on updating our Start Competing article and should have some guides on painting those little diamonds very soon.

As always, thanks for reading. If you have any feedback, feel free to drop a note in the comments below or email us at contact@goonhammer.com. If you have any questions that you would like answered, please submit them here.