This week Hammer of Math will look at the big boys of Cawl’s Primaris Marines; Gravis Armour. With the addition of Eradicators from Indomitus, the potential for new units out of the Codex coming in October, and a complete overhaul of priorities within 9th Edition it seemed like a good time to look at what these absolute units are capable of.

Gravis Armour is a configuration made available to Primaris Space Marines. When applied it provides the bearer with +1T and +1W which results in either a T5, 3W or T5, 7W monstrosity depending on whether or not the bearer is a regular Primaris Marine or a Primaris Captain (currently the only two options, although it looks like Heavy Intercessors will be something available in October). The basic model is 40 points for an Aggressor, Inceptor, or Eradicator and these prices generally include wargear (fragstorm grenade launchers and plasma exterminators are 5 points each). Generally these models can output a prolific number of attacks and T5/3W is a bit of a sweet spot that mitigates a wide variety of weapons, making them particularly useful in a fight. Your options are as follows:

Note that all of these weapons are Assault weapons. Aggressors can shoot twice if they remain stationary or Advance and shoot without penalty, Eradicators can shoot twice if they attack the same target, and Inceptors have the FLY keyword (note that this no longer allows a unit to Fall Back and shoot in 9th Edition) and a move of 10″. Aggressors also get one more attack and are equipped with power fists, making them an absolutely brutal dual threat.

One of the questions that popped up on our Patreon Discord about Gravis was how survivable they were compared to Intercessors. Adding +1T and +1W is interesting in that affects both driving and gatekeeping rolls in the form of the damage and wound roll. The change in probability for the wound roll depends on the initial value, as seen in the chart below. For example going from a 4+ to a 5+ means a 33% decrease in the probability of the wound passing. If you take the inverse of that probability and divide it by 1 you get the change in the effective wounds that the target has. Continuing with the 4+ value, ignoring Hit and Saves it requires an average of 2 attacks to wound the target. A 5+ requires an average of 3 attacks, or 150% of the original value. For damage rolls the difference depends on the Damage characteristic of the attack; a weapon that deal 3 damage each hit doesn’t care if it’s hitting an Intercessor or an Aggressor, while a weapon dealing 2D has to hit the Aggressor twice as often (2 hits instead of 1) and a 1D attack has to hit to 150% as often (3 hits instead of 2).

If we compare a 20 point Intercessor to a 40 point Gravis model, we immediately see that there are several combinations in which the Gravis unit is effectively twice as resilient as their less armored brethren. The points difference is immediately made up against any attack with a Damage characteristic of 2, as two shots are needed where one was before. For weapons that deal 1 point of damage the difference is made up against S4 or S5 attacks. The bottom line is that Gravis units are proportionately more survivable in terms of their points cost when compared to Intercessors against a significant portion of threats.

The presence of Aggressors, Inceptors, and Eradicators gives us three different areas to explore with respect to damage output. For this section we will take a look at the weapons options for each unit and see if anything stands out.

First up is the Aggressors, which can either field boltstorm gauntlets and a fragstorm launcher, or flamestorm gauntlets. We looked at three different targets; a T3/5+, T4/3+, and T5/2+. We’ll assume that we’re in the Tactical Doctrine (-1 AP), and that the Aggressors moved in the previous Movement phase. The output would double if they were stationary or used a Stratagem like Relentless Determination from the Salamanders. We’ll compare the boltstorm and flamestorm options as well as the Salamander ability to add +1 to the wound roll. 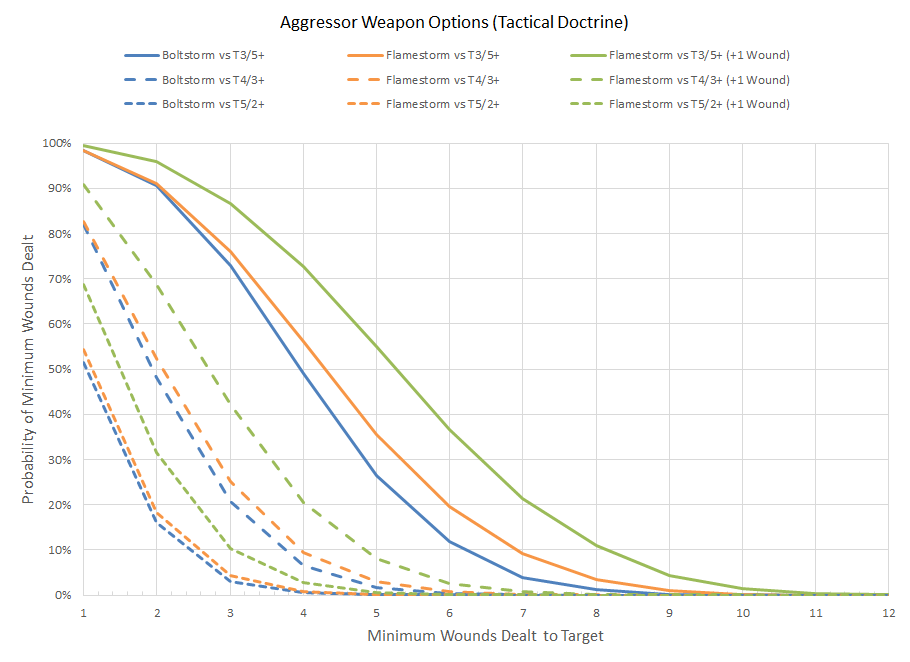 Note: A previous version of this chart accidentally swapped the flamestorm and boltstorm lines. I apologize for the mistake and corrected it above.

The lines clearly show that the ability to ignore the hit roll makes the flamestorm options superior to the boltstorm, particularly when a +1 wound modiifer is added via abilities such as the Salamander’s doctrinal ability. It should be noted that without the +1 to wound option the curves for the flamestorm and boltstorm options are extremely close, and this analysis does not take into account the Blast trait of the grenade launchers which would provide the boltstorm option with a boost against larger targets. Outside of Salamanders the boltstorm guantlet and flamestorm gauntlet options are very close, and with the benefits of the added range and blast trait the boltstorm gauntlet is likely a superior option for most situations.

Next up we’ll take a look at the output of Inceptors. Inceptors are in an interesting spot thanks to two changes. First, plasma executioners now have the Blast keyword; they’ll get full shots against a unit with 6 or more models. Second, the writing is on the wall with respect to plasma weapons and overheating. Previously a modifier of a +1 to hit would allow you to ignore the effect, but the plasma pistol in the Indomitus box has changed that to unmodified 1s. While that change hasn’t propagated to the Inceptor Datasheet just yet, I wouldn’t be surprised if it happens around October. In light of this the chart below focuses on scenarios where the model hasn’t overcharged, as an Inceptor firing a pair of overcharged plasma executioner has a 52% chance of killing themselves. 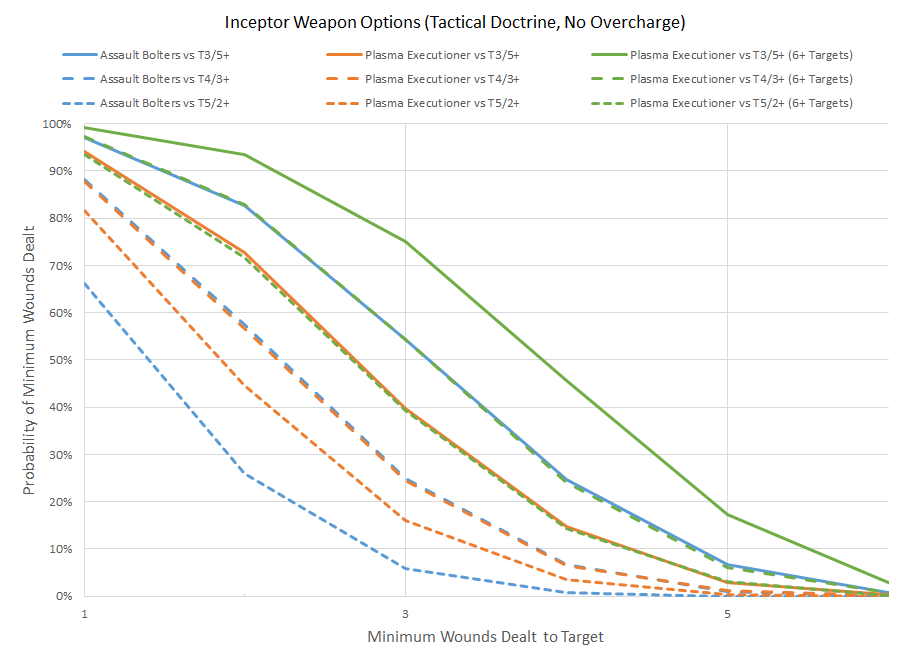 Finally we have the new option from the Indomitus box; Eradicators. These mobile forces can appear from a board edge and put 6 melta shots into a high value target with impunity. With a 24″ range it’s even feasible to drop within half range and pick the highest of two damage rolls. For this chart we focused on two targets; a T7/3+ threat like a Predator and a T8/5++ threat like a Knight. In both cases we compared the baseline attack to getting a +1 wound, affecting the target at half range, and supporting the attacks with re-roll auras for both Hit and Wound rolls of 1. 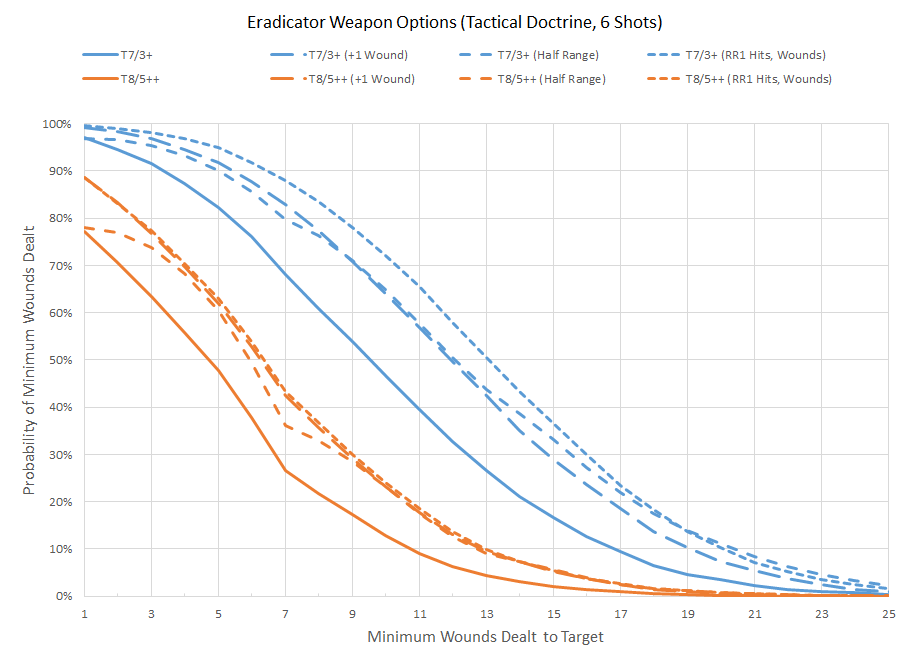 While not necessarily capable of putting out the damage level of something as egregious as Wolf Lord Wolfsmash Smashwolf the Second, for 120 points this is a very nasty result. It’s notable that the bubble for re-rolling 1s was most effective, better than being at half range or getting a +1 to wound result, although in the case of the T8/5++ target the results largely overlap.

9th Edition has opened up a lot of possibilities for Marine players who want to field something other than Intercessors, and as these results show there are definitely some good options to explore.