This week’s topic comes from our own Scott Horras “Heresy” who enjoys competitive play and is also Good At 40K, which something I absolutely cannot say regarding myself. With the recent Iron Hands nerf causing a massive shift in the power level of 40K for many Space Marine players, folks are starting to look outside of the box (Leviathan Dread) and see what other options are available. One thing we’re starting to see are drop pods armed with a particularly brutal combination of grav-cannon armed Devastators.

The best defense is a good offense. We all know that there’s a benefit if you can blast your opponent to pieces with overwhelming firepower before they can harm you. This is even more true if you can put your forces into a position where it is impossible to harm them first. In 40k the easiest way to do that is to keep your forces off the board and attack via deep strike. This particular combination does just that in an exemplary fashion.

This works for all Space Marine forces, but it particularly good for Iron Hands. You will require a Drop Pod and a squad of 5 Space Marine Devastators armed with 4 grav-cannons and grav-amps along with an Armorium Cherub. The total cost is 215 points. After dropping you apply Gravitic Amplification (1 CP) to re-roll the wound and damage rolls, use the Sergeant’s Signum ability to give one model a 2+ to hit, and apply the Armorium Cherub to the boosted model to allow it to fire twice. The end result is 20 S5, AP-3, 1d3 damage shots that re-roll wounds and damage. 8 shots hit on a 2+, 12 on a 3+. Of course there are a few other bonuses available:

In the end there are basically four options; a generic unit with no bonuses, and then the Imperial/Crimson Fist, Iron Hands, and Salamanders versions. Each were put up against a variety of forces under nominal conditions (but without any kind of improvement to hit such as with a Captain or a Chapter Master). All selections assumed that the unit was under the Devastator Doctrine, which poses a challenge for Imperial Fists and Iron Hands as so much of their efficacy is contingent on being in Devastator and they have no way to make a unit return to it. Salamanders are less impacted since the Devastator Doctrine means very little to them; they might actually be a solid option for players interesting in adding this capability to a different Imperial faction. Imperial Fists also suffer from being heavily focused on VEHICLE or BUILDING targets, so against Tyranids or T’au they might not be as compelling.

The first target is the ubiquitous Imperial Knight. While not nearly as popular as they were in the past, they still represent a solid target and there are a lot of T8/3+ things that also have an invulnerable save. Here we see that the 215 points get you a LOT of viability, with all three of the beneficiary factions averaging 18 or 19 wounds. Add a Captain to re-roll 1s to hit and the 50% mark goes up by 3 wounds to 21 or 22 (which makes sense as re-rolling 1s adds a flat 17% bonus to the expected value). Make the support a Chapter Master and Salamanders stay around 21 wounds (since between re-rolling 1s and their Chapter Trait they were pretty much set), Iron Hands average 24 wounds, and Imperial Fists average 27 wounds and have a 66% chance of killing a Knight in a single turn. Not bad for 215 points and some support. Both Salamanders and Iron Hands remain threats well past turn 1; it’s not infeasible to imagine an opponent bringing 645 points of Devastators and repeating the process three turns in a row. 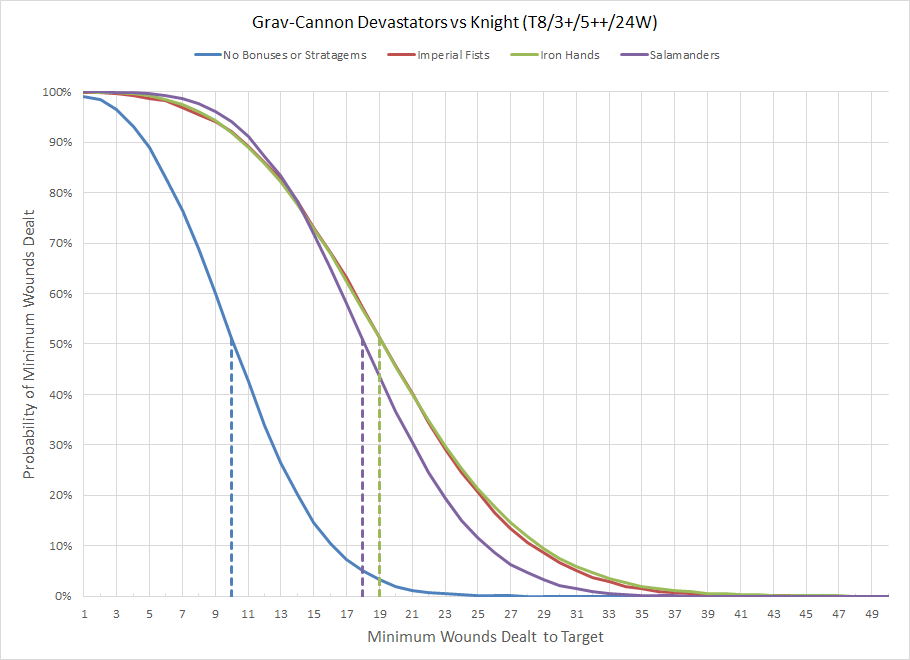 Against a non-VEHICLE target like Centurion Devastators things get a little more interesting. Imperial Fists lose all of their bonuses completely, being relegated to the same corner as White Scars and Black Templars. That said they’re still effective, hitting the Centurions and having a slightly better than 60% chance of killing enough to get their points back. The Iron Hands and Salamanders really shine, with a chance of wiping out an entire six man squad that’s improved considerably with Chapter Master or Captain support. 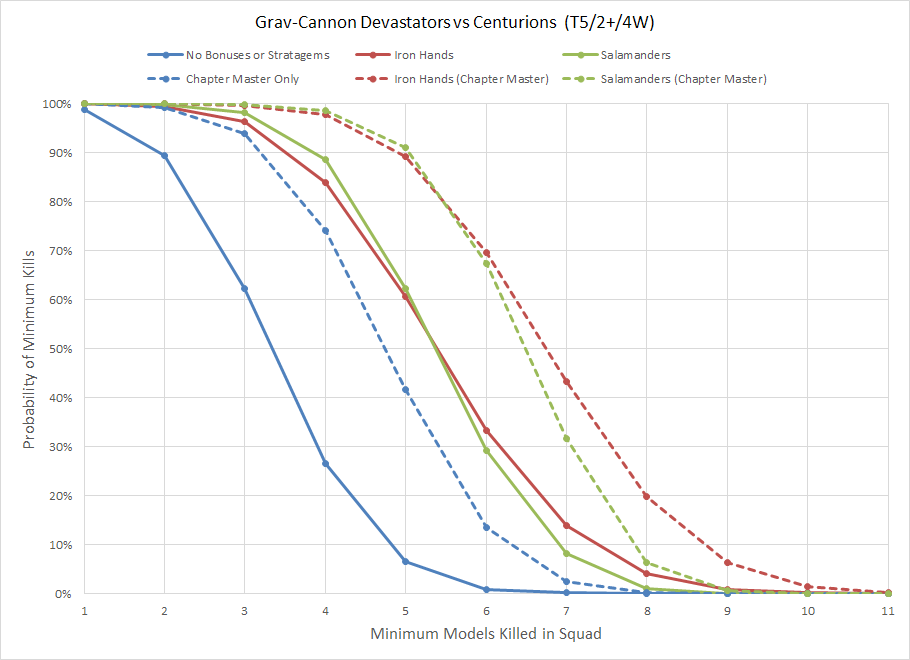 This might be enough of a threat to warrant looking at one of the toughest things to kill in the game; the Paladin Bomb. The challenge here is the combination of high invulnerable save, significant penalties to hit, and damage reduction. Unfortunately from the chart below we see that things aren’t looking too good; even with a Chapter Master to offset the hit penalties there is effectively no chance to kill enough Paladins to get your points back. You’re much better off using this unit to threaten other parts of the army, particularly since you can easily outmaneuver them. 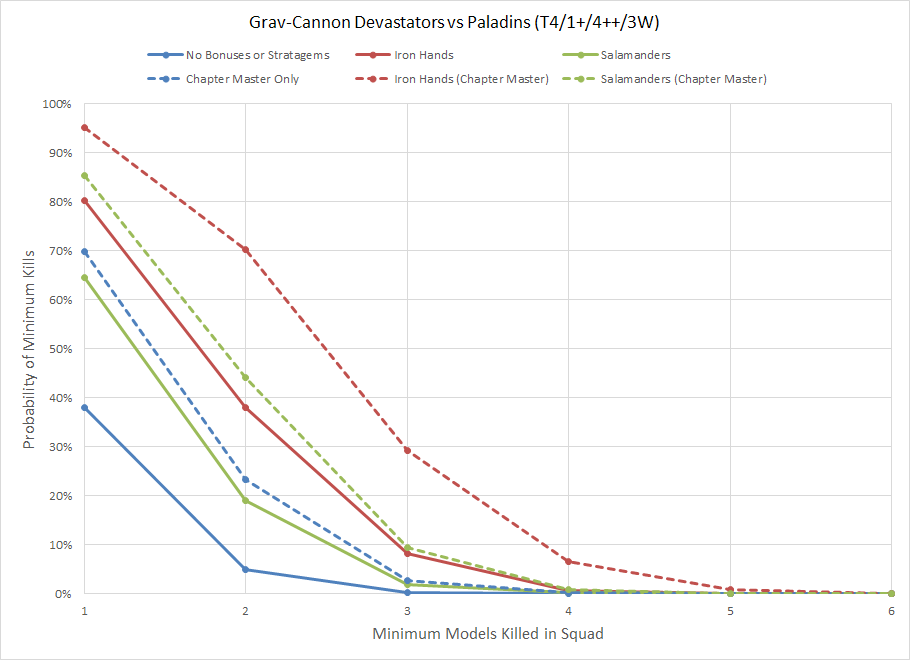 As you can see this is an incredibly powerful combination, and the barrier to entry is fairly low in terms of models and Command Points. The combination of ease of deployment, guaranteed safety until the unit is needed, and significant offensive firepower makes this a particularly nasty combination. Salamanders in particular seem like a viable option for nearly any Imperium army; just drop them in and blast the hell out of your opponent. And then do it two more times after that. On the other… hand Imperial Fists and Iron Hands will be most effective in the first turn under the Devastator Doctrine.