In this week’s Hammer of Math, Kevin is going to give some much needed attention to one of the bluish-silverish headed stepchildren of 8th Edition. We here at Goonhammer love how well Ritual of the Damned gave three of the least competitive factions in the game some amazing boosts, and since Hammer of Math has never really had a dedicated Grey Knights article it’s time to change that. In case you missed our reviews of the book and what it means for each faction, you can find our round-up here.

Grey Knights weren’t always the hyper-specialized punching bag that they’ve been in 8th Edition. Back in 5th Edition they were an unholy terror, an amazing combination of resiliency and firepower that allowed Grey Knight players to simply obliterate the enemy. Fun fact; this book was so incredibly overpowered in its original incarnation that Games Workshop subsequently stopped putting the names of the authors on the book. Imagine Iron Hands with a smaller model count, more offensive firepower, and an easier paint scheme. It was that bad. So they paid for it. Edition after edition the book was degraded little by little, until when the new book came out in 8th it was universally regarded as a sick joke. Grey Knights took all of the lack of offensive firepower of early Space Marines and combined it with high prices and plenty of specialized rules for killing armies that almost never played. So they suffered.

Fortunately, things are a little better now. Thanks to Ritual of the Damned Grey Knights have a lot of options and boosts that have players excited. They may not necessarily be at the level of Iron Hands (nobody should be at the level of Iron Hands), but they seem like a lot of fun. In this article we’ll go over one of the most potentially devastating Psychic powers we’ve ever seen.

Inner Fire is a warp charge 5 power (effectively 4 thanks to Brotherhood of Psykers) that has the potential to deal an egregious amount of damage. If manifested, you pick an enemy unit within 1″ and roll a number of D6 equal to the result of the Psychic test. Each roll of 1 causes the psyker to suffer a mortal wound, and every roll of 3+ causes the enemy to suffer a mortal wound. In addition to the +1 bonus offered by having a battle forged Grey Knight Army, there are several other ways to boost the roll. We covered Empyric Surge last week, and Grey Knights have access to two Relics which can further improve things. The Sanctic Shard allows you to re-roll Psychic tests and add 1 to the result, and the the Artisan Nullifier Matrix allows a friendly Grey Knights unit within 6″ of a Librarian that carries this Relic to increase or decrease by 1 the value shown on one of the dice. Added together and the result is potentially a +4 bonus, although getting that bonus requires two Relics and two units. This means you could potentially deal as many as 16 mortal wounds to a target, or you could kill yourself, or both! Don’t forget Psychic Channeling allows you to spend 1CP to roll 3 dice and pick the 2 highest. 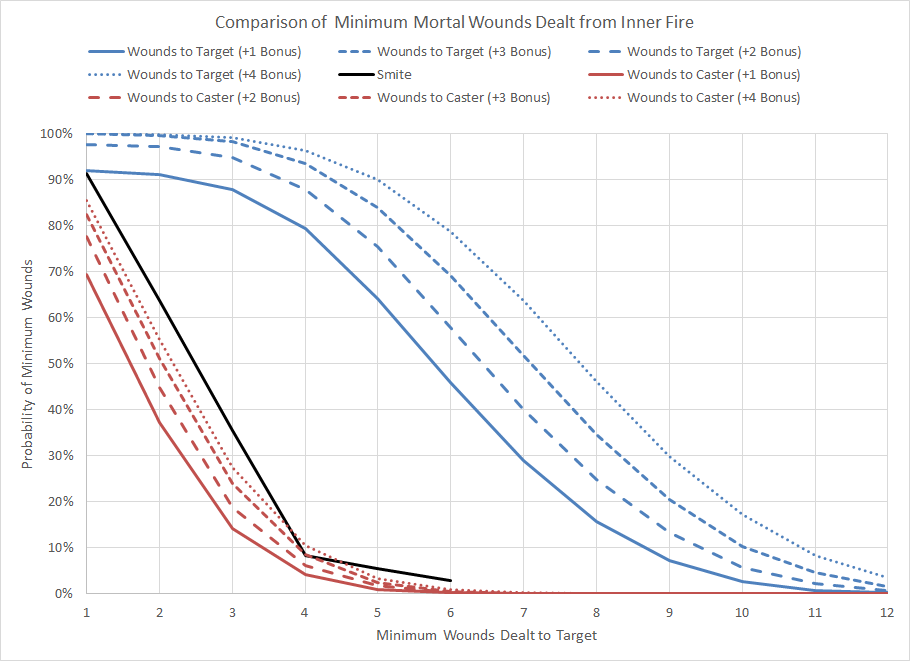 With only the bonus of Brotherhood of Psykers, Inner Fire still deals 5 mortal wounds more than 50% of the time. Each successive bonus roughly adds 1 mortal wound to the average result, giving you a solid chance of killing nearly any character outside of edge cases like Chaplain Dreadnoughts and high-wound characters with Disgustingly Resilient or its equivalents. This also doesn’t include the benefit of using the re-roll ability of the Sanctic Shard, which could potentially turn a mediocre result into a devastating one.

There is one way to overcome the range issue, which Wings pointed out in our Ritual of the Damned review for Grey Knights: The Power Adept Stratagem allows a Grey Knights Psyker with the Rights of Banishment ability to spend 1 CP to extend the range of any power by 6″. Dynamic Insertion allows you to set up a unit that’s using the Teleport Strike ability anywhere on the battlefield that is more than 3″ away from any enemy models (it can’t charge afterwards, though). Note that Inner Fire does have any targeting requirements other than that the unit be within range of the ability, allowing you to take out characters and other high value targets with a suicide Psyker. Drop a Grey Knights Apothecary from orbit and light something up for half a dozen mortal wounds. Hell, take two so you can pull this off on turn 2 and turn 3, and if you can put enough buffs in place, you might even be able to knock out otherwise untargetable Dreadnought characters.

No matter how you look at it, this is a potentially awesome power and a big boon for Grey Knights.

Grand Master Dreadknights (which honestly sounds more like the name of a gothic funk band than a 40K unit) got a boost in Ritual of the Damned in the form of Overwhelming Assault, a 1 CP Stratagem which gives the unit an extra attack, and allows wound rolls of 1 to be re-rolled, and allows damage rolls of 1 to be re-rolled. The boost to the damage roll is important as damage results are a driving roll which significantly affects the outcome of the attack. Dreadknights have three weapon options; a pair of dreadfists, a nemesis greatsword, and a nemesis daemon greathammer. Here we’ll take a look at the various options available and how they perform against Intercessor, Centurion, a generic tank (T7, 12W, 3+), and a Knight target. 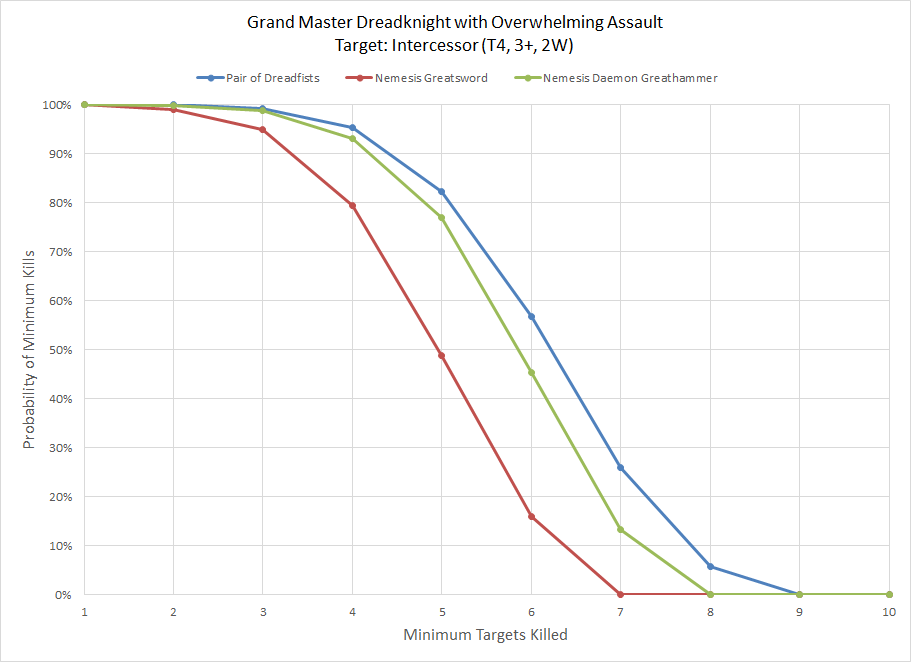 As expected a gene-altered psychic warrior monk with centuries of experience in a battlemech is going to kill some people. The reliability of the greathammer makes it a fantastic choice in spite of the penalty to hit; every wound is guaranteed to kill thanks to the minimum damage. The extra attacks of the pair of dreadfists gives it a slight advantage as the majority of the damage from the greathammer is wasted. 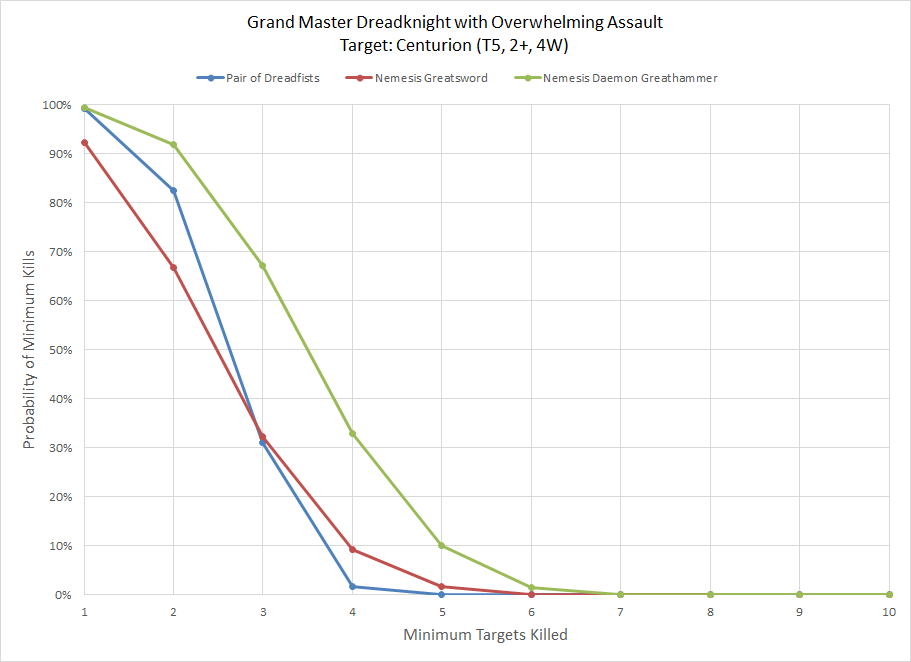 The extra damage of the greathammer makes it the superior choice against Centurions. 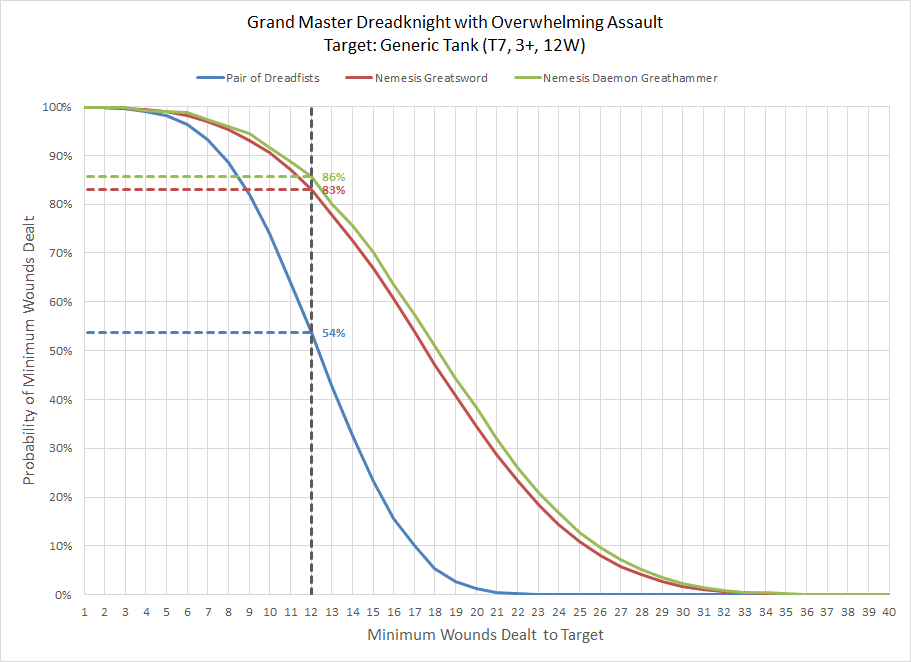 Against the generic tank the greathammer has a slight edge over the greatsword, but they’re close. 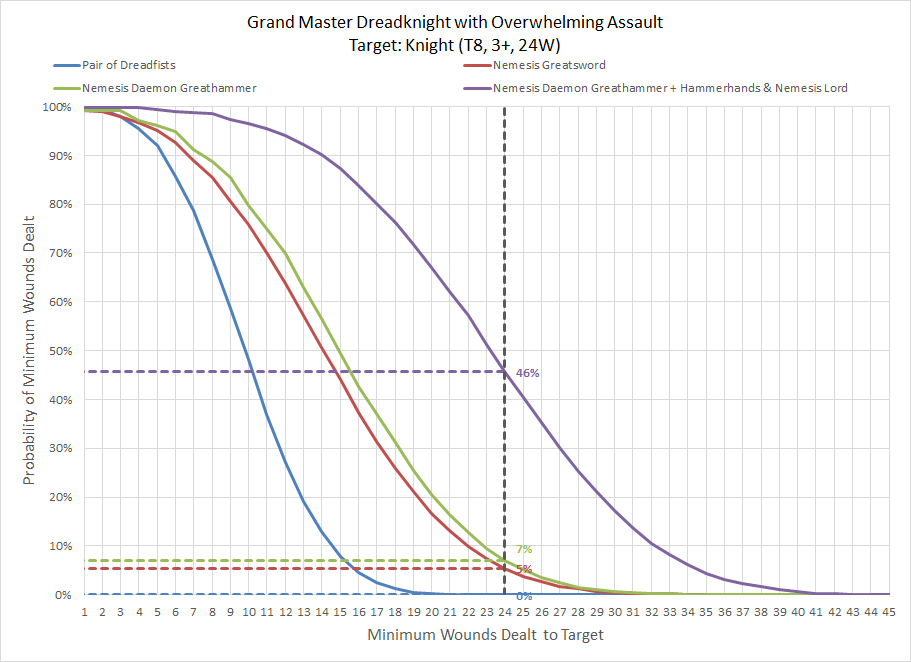 The difference is the same for the Knight. I also added a track showing the benefit of using the Hammerhands power (+1 to wound) as well as the Nemesis Lord Warlord Trait (+1 damage). This provides a very viable one shot kill option. In every case the dreadfists were an inferior choice due to their low damage. It cannot be emphasized enough how important number of shots and damage output is compared to all of the other characteristics.

I’m looking forward to seeing the shenanigans that Grey Knights players will get into with their new rules. Inner Fire looks like an incredibly powerful tool that can selectively delete a large number of threats. Screening and positioning will be critical to protect vulnerable components. On the Nemesis Dreadknight front it seems like the greathammer is unquestionably the superior choice for all scenarios outside of single wound targets.